Just found out Meade Gougeon has passed away.  I met him a few times during my Everglades Challenges.  One of my fondest memories from sailing was sitting at breakfast after the '14 EC with Meade, Randy Smyth and a few other titans of the tribe.  I mostly just sat and listened to them all talk as I sipped my coffee, content to soak up a tiny piece of their knowledge and skill.  I didn't know him well but I will miss him at the next Watertribe event I attend.  He was a really great person.

Thanks Zero, I was hoping someone would post a thread here.

Mead was one hell of a human being. I think a lot will be spoken about him in the coming days. He affected the course of my life quite a lot, so maybe I'll try to speak my thoughts too.

Not sure if my life would have turned into such positives without the Gougeon Brothers and their way of thinking "out of the box". Their red book became my bible and I made the composite business to my way of business life, though with a different brand (SP Systems), after initially marketing the West brand in Germany.

I admired Meade a lot when he managed to win the DN North American Championship against tough competition at the age of 66. He will be missed not only by his family and friends. Sail on Meade and fair winds.

I am very sad to hear this news.  I met Meade at the 1969 North American Multihull Championships.  I still have a signed first edition of Gougeon Brothers on Boat Construction that has influenced my boat building ever since.  He was involved not only with boat building but also with early wind turbine blades.  I remember his telling of pricing some test wood/epoxy blades for NASA.  He estimated a price for a pair and then doubled it for safety.  NASA assumed it was the price for one blade and doubled it again.  The blades ran successfully on a large turbine in Hawaii.

His innovative style will be missed.

Meade was the definition a true gentleman , friend you will be missed by many

Meade and Jan were two men I admired very much. I'm glad I got to spend some time with Meade and get to know him a little bit. I'm on my way to Bay City tomorrow (for an unrelated business trip.) I plan to hoist a glass in his honor while I'm there.

I met Meade and Jan after they called me from Florida and were standing on the beach admiring one of the first Weta's in the US (they were very helpful to this new owner showing their love for sailing and helping people enjoy sailing).  They soon after showed up in Duck (with a converted ATV trailer) and bought 2 and I had the best time talking sailing and life with them over lunch that day.  Their input and advice about the Weta has been invaluable in the success of Weta and I thank them for that.  They will be missed by many and my thoughts and prayers go out to the Gougeon family. 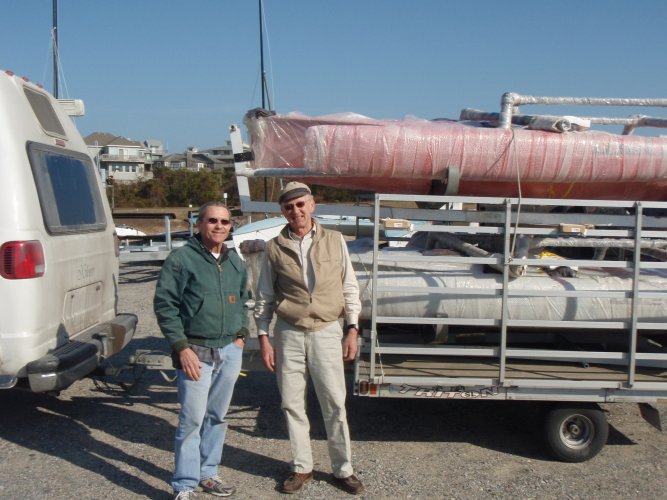 I sailed my first Everglades Challenge in 2014. Meade expertly sailed past us in the Twisty Mile in the Florida Bay. The day after we finished in Key Largo, I trekked over to Mrs. Mac's for breakfast and Meade and his buddy, Hugh Horton, immediately invited this unknown newbie to join them for breakfast. For the next hour or so, watertriber's of illustrious reputations each paraded by, offering their respects. It was like having breakfast with "The Godfather". Every year after, Meade would always stop to say "hello", ask how I was doing and always would remember my name. I was not worthy.  Having busted out on the first day of this past 2017 EC, I sat in awe as Meade accepted yet another finisher's paddle at the finish in Key Largo. The man was unstoppable. Cancer didn't defeat him. I believe that he is simply sailing on to the next plane of existence. Lead the way, Meade!  Maybe drop a marker here and there to show us the way. Fair winds, my friend. 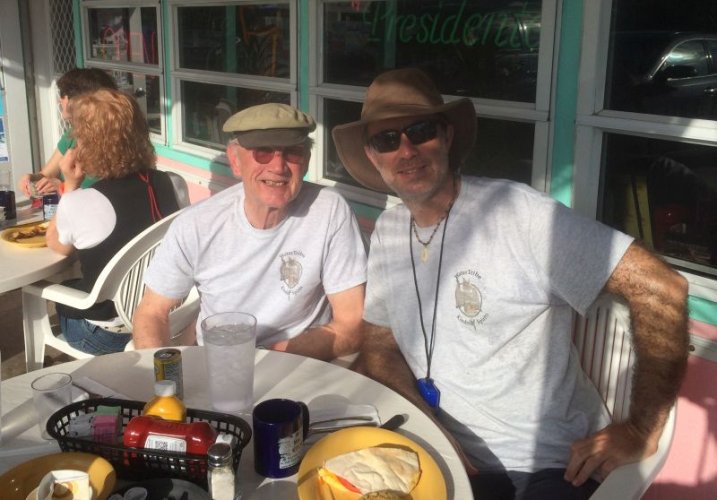 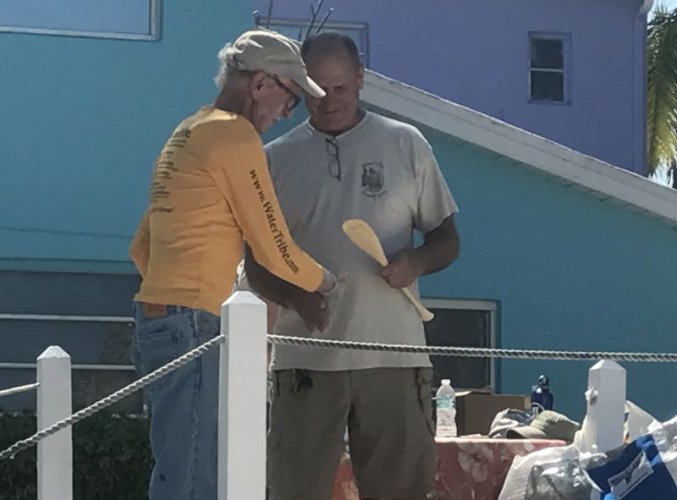 Me too. Read it straight through and then referred to it often.

My wife and I careened down Sarasota Bay with bare poles after making the stupid decision to leave the mangroves the second morning of EC '12. We spotted the anchorage in front of the Sarasota Sailing Squadron and figured there'd be calmer water there. Heading to the beach, a nice guy showed us where we could pull up our boat and brought us fireside and introduced us to the club's members to be sure we felt we could impose on their hospitality.

It was Meade, of course, and he proceeded to charm my wife while telling us stories of racing iceboats on the Chesapeake Bay against the Russians in the late 70s. Hysterical, warm, patient and kind, he and Hugh Horton became friends that crazy weather day in March.

Had a pint of porter thinking of him today. Will use his epoxy again on the weekend. Can't stand he won't finish another Watertribe event again. Hot Canary, Woodwind, Elderly Care... seeing his works of art were worth the price of admission.

During that great post EC breakfast I was asked what boat I had used for my first EC.  I replied a Vanguard Nomad, to which Meade replied something like, "always thought that was a terrible boat for the EC".  Or something like that, that's how I remember it anyway.  I still laugh a bit every time I replay it in my mind.  I never took offense, just sort of thought, "Oh, should have chosen better".  Interestingly we are working that boat up for the 2018 EC.....

I was in a solo Super-Mac race out of Chicago years ago and amongst many other issues, my wooden tiller broke.  The autopilot was attached to the metal part of the assembly so I took the wood off and used the kit the Gougeon Bros donated to each competitor and some duct tape to fix the wood portion.  I was able to share that story with Meade.

I did not know him well, but Meade struck me as one of the most gentlemanly persons you would ever want to meet.  I hope he will weigh in, but I was racing with Ron White on Cheeky Monkee and we showed up to town with a punctured hull.  Meade just calmly said, we'll make sure you make the starting line...we did  His hosting of the first night of the Great Lakes Multihull Championships each year was great and I treasure those memories.

I can see him in heaven with Jan's latest creation.  Questioning every aspect, but grinning because he is sailing with his brother again.  The world is a a little dimmer place for his loss.

PS  The last time I sat at a table with Meade, it was with Peter Harken as well and I made the comment that their two companies were the absolute best in customer service bar none.

MisterMoon said:
Meade and Jan were two men I admired very much. I'm glad I got to spend some time with Meade and get to know him a little bit. I'm on my way to Bay City tomorrow (for an unrelated business trip.) I plan to hoist a glass in his honor while I'm there.
Click to expand...

Tell the crowd about the time you helped to move Hot Canary and told some old guy to be careful how he lifted it.

West System epoxies and the Gougeon brother’s work has had a big effect on my life. I have admired both Meade and Jan since I was 13 years old and I would say that no one but my parents have affected or influenced me more than Meade and Jan. Through them I developed good epoxy skills and that gave me a livelihood and an satisfying creative outlet.

I think that in many ways Meade is best represented by the company that he founded. Doing one’s absolute best seems to be the way of operating at WEST, no matter how much work is involved. In their case, this is true to the point of wondering just where that kind of ethic came from. I think that a good part of it came from Mead.

Developing and sharing a new technology must have been exciting for the Gougeon’s, but a responsibility too. The way that Meade and his family and friends went about this task made learning the technology exciting, but it also showed a better way that went well beyond boatbuilding and epoxy.

Continually improving the products, sharing the technology, being honest about the compromises, and providing good support for people using the products is how the company has been run for almost half a century. I know of no other company that has taken this approach to such an extreme and it has influenced me greatly in both how I approach my work and how I run my business.

Wood/epoxy boats have been Mead’s passion since his beginning with epoxy and it has been a passion that he passed on to so many people, myself included. Mead’s own boat, Adagio is a 35 foot trimaran that he designed and built in 1969/70. Adagio has been continually raced for 47 years and weighs just 2700 pounds ready to race. If that’s not a testament to the technology that they developed, I don’t know what is.

I'm going to miss Meade, even though I never knew him well. Mostly I'll miss watching what he does next.