That one's been done.

Yeah but there's plenty of mocking left in it.

For example: "Family decided to sell when the chickens all died"

Well, just counting on my fingers, I can only come up with about 80 cylinders.  But it's not like a formal inventory.  There's probably crap laying around out of sight out of mind.

No wonder I never get anything done around here... way past the maintenance diminishing returns horizon.

toddster said:
I can only come up with about 80 cylinders
Click to expand...

Well that's impressive...
I'm on the other end of the spectrum: I've got a total of 5!

Who else is at the bottom of the range?

Well, I think I previously claimed 100, without actually counting.

So what would the boatyard paradigm be? Cordless tools; number of cells, sum of voltage, amp hours?

Maybe not a joke.  After the big Rigid 9 amp-hour beast came on board I started wondering whether we should worry about proliferation of lithium ion batteries.  At the least, the charging-farm can get annoying.

Maybe not a craigslist subject though.  New thread for esoteric inventories?

Tossed 2 gas trimmers this past weekend after spending way too much time fiddling...  Argg...  Electric will have to work, albeit not gracefully.

Do air compressors count?  If electric I don't think so.

Gutless oil leaking pressure washer is next for the bin. (it was free anyway)

Auto fleet trimmed to two.  Best move ever... so much less logistics.

" He who dies with the most toys wins" is BS.  Stuff starts to own you, rather than the other way around.  I wish I'd simplified more 20+ years ago.

Airwick said:
Who else is at the bottom of the range?
Click to expand...

for a total of 14. I have a lot of electric lawn implements as well.

Amazed how they add up.   I counted 40, but 10 or so are in back of the back shelf longing for a new life.  Do 110 volt air compressors count as cylinders?  43 then.  Thats not counting the handful of little 12 volt tire pumps.

Similarly amazed when I counted total length of boats owned for that thread.

Interesting perspective of how stuff accumulates over the years.

Total  Hp around 500.   That statistic needs to be considered as well, like ballast to sail area.  That gives 25 hp per cylinder but its sabotaged by the Evinrude’s 2 cylinders for 4 HP.

If you like a puzzle but want a hint I can give you the total hp.

Does anyone else follow Mustie1 on YouTube? He's into fixing internal combustion driven machines and posting videos of his work, and his cylinder count might be well over 200.

My count is pretty low, everything garden and even my boat is now electric, so 9 for two cars.

Back to mocking, here's a "brand new" MacGregor 26 asking $60k, partly because it has a "self ferler", whatever that is.

Here’s a good one.

The owner knows it needs some cosmetics and the draft may be off a little with 4 years of growth on the bottom.

Don't worry about the electronics, the 2 lightning strikes took them out for you.

And who needs to worry about a pesky title when it’s time to move on... 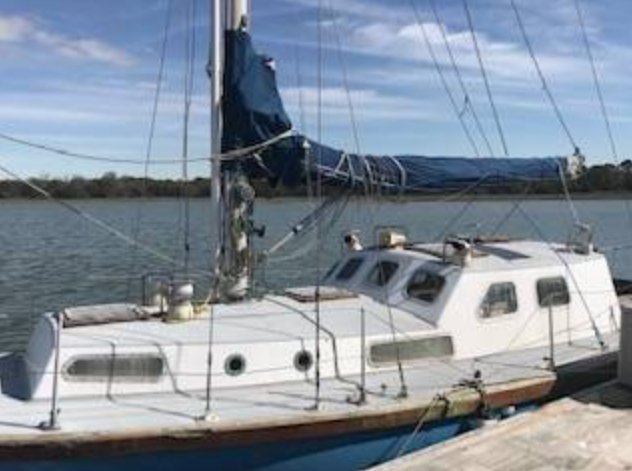 TheDragon said:
Back to mocking, here's a "brand new" MacGregor 26 asking $60k, partly because it has a "self ferler", whatever that is.

From the ad "Manufactured in 2014 and finishing it up now. A real yacht! Your option if you want the custom Miss Scarlet art wrap we have had designed!
Contained head (rarest option), shower (second rarest option), aluminum trailer, Ipod, sail inventory, self ferler and much more. There is no other boat on the planet in this category. We are proud to list this yacht and it is way under value at this price!"

Seems to me that their business model should not include letting that much capital lay around for 5 years. But hey, it's got a "contained head" whatever that is, and apparently the lucky buyer would be among the few Mac/Tattoo owners who shower.

Oooh! It comes with an iPod!   Well, ok I have an iPod.  But I don't brag about it (and am often mocked for it).  I am kinda proud of my iPod the same way I am proud of the old slide rules that I also own.

And now, a new submission for the committee to consider, review and devastate:

A possibly mobile crack/meth yacht, for a burgeoning Walter White to make a little extra cash.

Note the rigging design, which prevents the possible overwhelming of stability, resulting in the ruin of the current batch of "product" being developed below.

A plus is the steel "patina" for keeping a low profile.

That boat does not come with a free tetanus shot, but offers every reason to have one!