I realize the order of operation is backward here, and I'm hesitant to ask, but we just purchased the boat and I was wondering if anyone knows the history or anything about it.  It's a 2008 Columbia 30 that has been somewhat modified.  Most notably it has twin rudders and the original carbon rig has been modified to fly a masthead jib.  Other than that it seems to have undergone a pretty aggressive weight reduction program - no main bulkhead, no hull liner, no inspection ports down below, no cushions, no settee storage bin liners, no sink or stove, no liners in the port and starboard pods where the sink and stove would be, a porta-potti, and an outboard motor.  So, it should have more upwind horsepower than the stock boat, the ability to keep it going straight, and I assume it's pretty light...

95Terp said:
I realize the order of operation is backward here, and I'm hesitant to ask, but we just purchased the boat and I was wondering if anyone knows the history or anything about it.  It's a 2008 Columbia 30 that has been somewhat modified.  Most notably it has twin rudders and the original carbon rig has been modified to fly a masthead jib.  Other than that it seems to have undergone a pretty aggressive weight reduction program - no main bulkhead, no hull liner, no inspection ports down below, no cushions, no settee storage bin liners, no sink or stove, no liners in the port and starboard pods where the sink and stove would be, a porta-potti, and an outboard motor.  So, it should have more upwind horsepower than the stock boat, the ability to keep it going straight, and I assume it's pretty light...
Click to expand...

I was very interested in these boats, and followed them for a while. I remember a boat on the West Coast that had twin rudders, but IIRC that boat also had a wheel.

It sounds like your boat's structural modifications may have been made with more eye to weight reduction than structural integrity. Stiff &amp; strong is fast, might want to double check everything before hitting the gas pedal!

These are really cool boats, congrats

You might try contacting Vince at Columbia Yachts, I'm sure he has info.  That boat was sailed out of Dana Point, Ca originally by a couple of guys.  I think they bought the hull and rig from Columbia but then "assembled" the boat themselves with the twin rudders and masthead rig being a clear change from the original C30.  The boat had none of the additional interior pieces only the base structural pieces.  Those boats were a little "flexy" so be sure to check any points of load bearing, ie winch bases, turning blocks, deck joint...

Vince claimed to have no knowledge of the boat.  Nor did Tim Kernan...

We've been over the boat a few times and had a survey done as well.  It looks solid, just dirty and a little neglected.

Well if it’s the boat I thinking of then it was definitely a “Frankenstein” of sorts, assembled by owners and continually modified as they went.  It was definitely fast off the wind, upwind you needed railmeat and a good driver to navigate any wave action.  Due to its lightness and flat bottom it could slam and stop if not careful.  One of the owners was a sailmaker, I say that with a hint of sarcasm, so there was a constant redesign of sails.

I don't think any of those sails are still around if that's the case.  It has a set of North 3di's and asym's and a brand new Code 0.

95-  I'm somewhat familiar with the boat. I own the prototype Hull #1. Understand that all of these boats are a bit different depending on when they were built.

Good, generally well built boats that were ahead of their time. What seemed strange then such as cockpit comings, inboard, and high free-board are pretty normal now.

I can tell you that yours is a later model that was in fact finished off and commissioned by the buyers. How well any of it was executed is not known however you should have a good base platform in any case. The boats are indeed quick, easy to sail, and comfortable while offering some headroom and cockpit space.

I'm not a fan of that twin rudder setup and would look at a deep single rudder option generally for less drag. The boat is pretty narrow. If it's sailed correctly, you should never have any issues. The Southern Spars mast you have is a good mast, same section as the Farr 30 but the tip is supported higher up. Stiffer and lighter than the aluminum option that was also offered at the time. It was designed to eliminate the need for a backstay. I can tell you confidently that it does in fact require a backstay in anything over 8 kts, upwind or down. Without support, there is too much headstay sag which generally powers up the boat too much, reduces pointing, and increases the heel.

Your mast was modded by raising the forestay tang about 6-7' higher than original it appears. Without knowing what else was done to keep the mast in column, I'd definitely have this checked out by a competent mast rigger. It's a good idea, but there is a ton of work involved besides just moving the forestay point up. Were the hounds entirely relocated up higher, or just the headstay?

Check that tang for any signs of wear/tear. Check for inversion upwind and use your backstays. When I talked to Southern about doing a mod such as this, they were strongly against it for many reasons. If it was done correctly, you should have a rocket. Not certain where you sail but this is a light air/high powered setup in it's current config. Good luck and have fun.

Thanks for the info.  It seems to have survived 10 years of sailing pretty well and It looks to me that whoever put it together knew what they were doing.  We haven't had the rig down yet to inspect it closely, but that will happen soon.  I don't see any provision for a backstay currently and it has a square top main.   However, I have been concerned about the lack of mast bend control so we'll probably look to set something up.  How aggressively do you tune your rig to changing conditions?

We sail on the Chesapeake which is typically 10 kts or less.  However, we will certainly see days in the 20+ range as well. 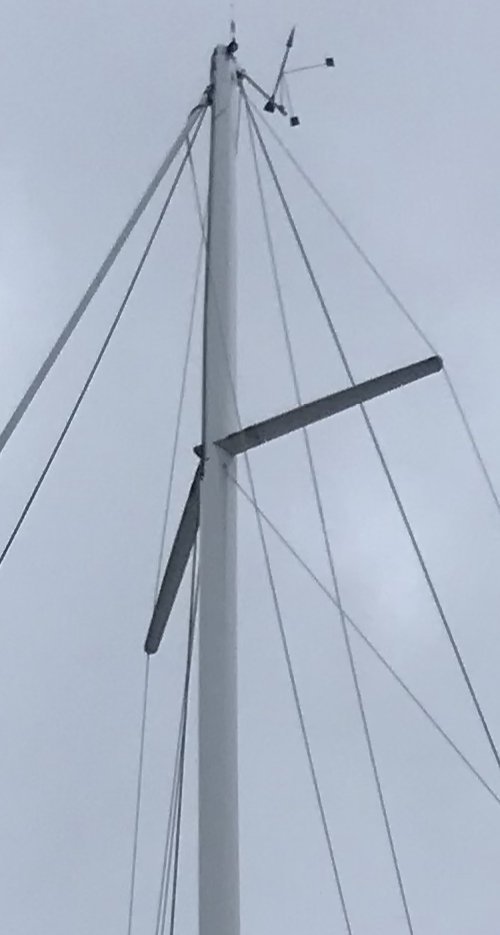 Good photo - lots to see here... I'm make no claims to be a rig expert but what I see is that your D2 intermediates are not doing much to manage your headstay tension. In fact they may invert in their current config. The original headstay attachment point would terminate right where the D2's are. Since the headstay attaches higher up now, your Cap shrouds have the new job of maintaining headstay tension when they were originally managing tip flex. Issue is if you tighten them, you make the tip stiffer. The boat is already tender... Seems the other owners put all of their eggs in this basket (light air/rocket fast).

Like I said, great for light air however you may have some issues in med to heavy air since your Caps are strung on. Adding a backstay will help. I'd love to hear from someone who really knows this area and not another forum clown regarding this.

You have a very powered up rig. If your are using a Zero, you definitely need dual backstays, no question. I don't see a masthead crane on this rig.

Yeah - I wouldn't say the boat was put away well for the winter.  It's going to take a good bit of sorting and updating...

We used to do that same thing with our topping lift. Stops the foil from flopping about in strong breeze.

Edit: Although we weren’t that “creative “ about it.

I'm assuming we'll carry a good bit of prebend in the rig which should help keep it from inverting.  However, in thinking about it, I guess we do have the hardware in place for runners.  They aren't currently rigged, nor did I see them anywhere on the boat though. 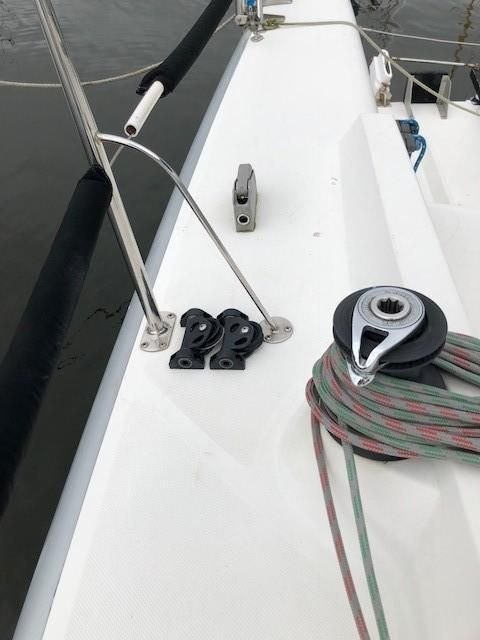 Dumb question but why not just find the original owners and ask them how it all works? Boat's only 10 years old, I'd think they'd be easy to track down.

I was hoping this approach may accomplish that to some extent.  I don't know who they are...

As I recall the boat did have a set of masthead runners.

Was the boat called Kamikaze?  I've been searching SoCal PHRF ratings from 2009...

Did you buy the Milford,CT boat?