New on the water: The proa "Proasis"

I would like to introduce you to a new member of the proa family out there in the world: Proasis!

Proasis is an 9 m long shunting outrigger canoe with a comparable large windward hull for some accomodation (kind of drua style). She has a traditional Marshallese sail and an unique double-kickup rudder system. We have designed and built her as part of the Proasis-Project on a budget of  4000€ (that includes everything, even the cost for renting a workshop and transporting the hulls to the water) the past two years and launched her last week.

The entire process from the first sketches over model tests and mockups to the sailing boat is documented on our website: www.proas.is. You can find a first video of her sailing on my youtube channel. We will post more videos like a boat tour, details about shunting, the rudder system and performance there, so make sure you hit like and subscribe if you want to get updates.

The proasis is not just about building a proa for fun, we have an important agenda: Due to the devastating effects of climate change, a rising sea level is eating up the shore lines, causing soil salination and squeezing out the freshwater lenses of islands or low lying coasts.  Up to 80% of the  human population lives close by the ocean side and will be affected in the coming decades. The Marshall Islands are already affected by climate change today, the small island nation is literally fighting to stay on the map!   The scientist's predictions doesn’t sound very promising: a couple of decades, or half a century until the islands will be uninhabitable due to the rising sea level! The population will be forced to leave their ancestors homeland – a cultural genocide.

The Proasis Project cooperates with Waan Aelon in Majel (WAM), a Marshallese NGO dedicated to traditional sailing canoe building and the transition to emission free shipping. Prosis will serve as research and development platform for inovative solutions to implement in small island countries. At the same time we hope to get some attention with this unusal craft to support ocean and nature conservation. 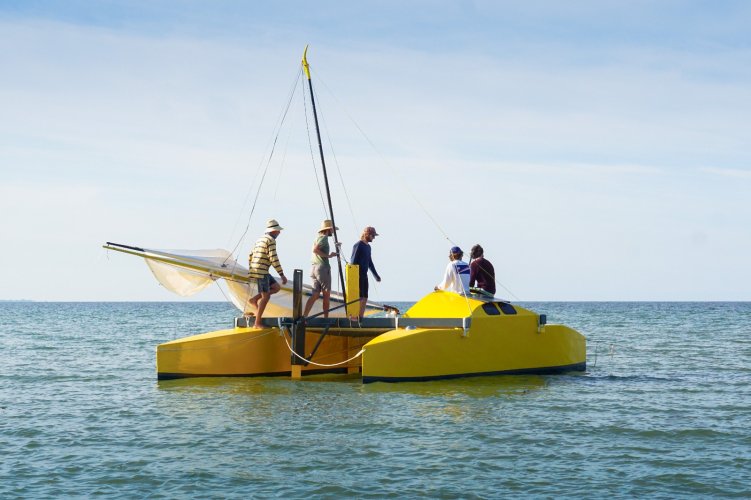 East of the Great Divide

Well done! Yellow looks great but is such a hard colour to use.

Seems to be all the rage with proas: 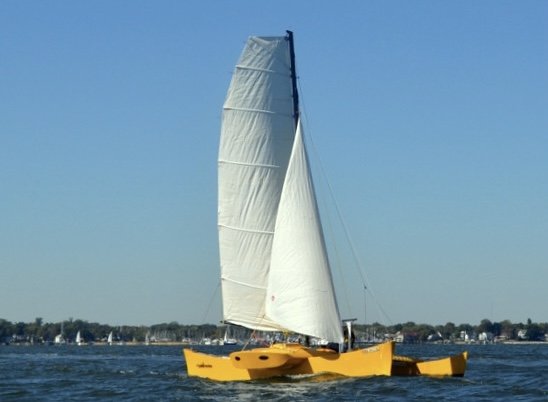 Sidecar said:
Seems to be all the rage with proas:
Click to expand... 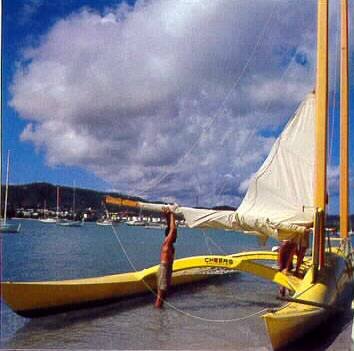 Seems to be all the rage with proas:
Click to expand...

Because its a great color! Not to hot in the sun, UV resistant, doesent highlight dirt, blends well with the blue sky and turquis water and good visibility. Also it attracts attention, which is the main busyness of our project.

We've just completed our first sea trial to denmark. You can find the full article and more pictures on www.proas.is. 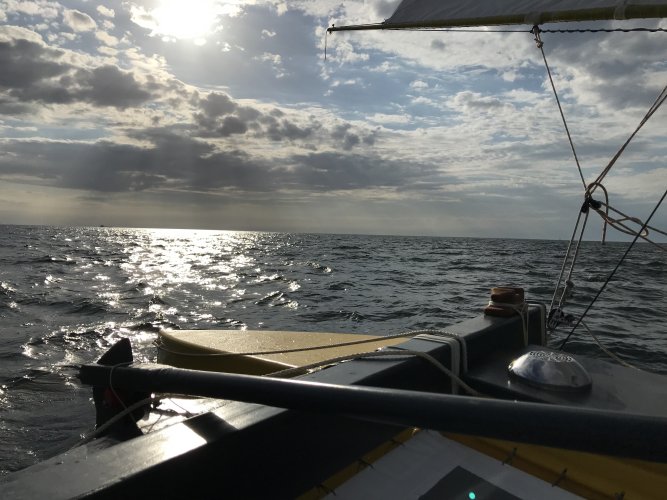 Some new videos of proasis sailing together with other proas:

Some footage of proasis sailing in more wind:

Very nice.  What is the reason for the foot of the yard only going to the forward crossbeam instead of the bow?  Is it that you don't need to shift the sail that far forward because you have a big rudder, that you want to load up the rudder to provide lateral resistance, that it is safer for the crew, or some combination of those, or something else entirely?

Interesting question! The boat was designed to sail balanced with the foot of the sail placed approx. 1m in front of the beams where it is right now. Nevertheless, the current position works most of the time, only the force on the rudder is annoying. The reason we've placed it there is that it was faster to lash the mount to the beam than to wait for glue to cure on the bow  So its only a temporary solution. The final foot mounts are now glued 1m further on each bow and fitted with cleats for faster shunting. Should take about 40 sec from cruising speed to cruising speed now.

I don't really like posting here because of the toxicity of the place but I am amazed that this thread hasn't stimulated more discussion.  Here is an interesting design drawing directly from experience gained in the South Pacific, well described without extreme claims and even actual performance data.   I like it a lot.

I too like this project quite a bit. I'm especially impressed that they managed to finish it with such a limited budget and in a reasonable amount of time. This project was one of the things that inspired me to use a crab claw (oceanic lateen) rig on my latest design. Combining modern hull forms and materials with traditionaly simple methods (like lashing the beams) and rigs undoubedly worked well here. The presence of actual performance numbers, polars, videos, drawings, and other such information without any claims or presumptions is very nice indeed. Aesthetics were undoubtably a compromise given the mission of the project, but it doesn't even look bad. Maybe they will even humour us and make plans/more detailed drawings available to the rest of us once the project has matured a little.

I have been and will continue to follow you guys on your site and YouTube. Keep up the good work.

Yes, the aesthetics are a bit challenging at first but I am getting used to them. It isn't as if there are many good looking multis around anyway IMO.

I think that there are quite a few good-looking multis around, but I've always preferred modern designs to the classic monos. However, this does not usually extend to proas. It seems that having a profile that is symmetrical end to end does something to the aesthetics that is difficult to overcome no matter how good the design is. I think that Cheers is an exceptionally good looking proa, but the other Newick proas which followed do not look nearly as good. There is a certain functionality to the Russel Brown style (turned up flared bows, curved sheer, and a big protruding pod, often with a viewing cupola atop it), but the aesthetics of these designs just don't do it for me (no offense Russel). Sidecar and the Harrys are the closest anyone has come to truly modern styling in a proa. My thoughts on Sidecar's styling are documented already (and I obviously immitated it in my own designs) so I won't go back into that. However, since Proasis is a WTW proa, it is worth talking about the styling implications of this type of design.

By virtue of their layout, WTW (and Indian like Epicure) proas will suffer from a visual standpoint. Proas are already an aesthetic compromise because of the plane of symmetry being flipped 90 degrees, but proas which place their accomodation on the short hull take this to a whole different level. Having everything in a short hull hung out the side of a barren larger one just looks fundamentally wrong. To the credit of their designers, Proasis and the Harrys don't look outrageous and offputting, but it is a delicate balance. Suffice it to say that they look about as good as could be expected IMO.

Obviously all styling is subjective and proa enthusiasts are some of the most radical sailors out there, so we are all likely to have vastly different opinions on the matter. As I noted before, looks probably weren't a priority for Proasis, nor should they be for any prototype.

Anotherclarkey said:
It isn't as if there are many good looking multis around anyway IMO.
Click to expand...

Says who? I think the Hum is easy on the eyes. 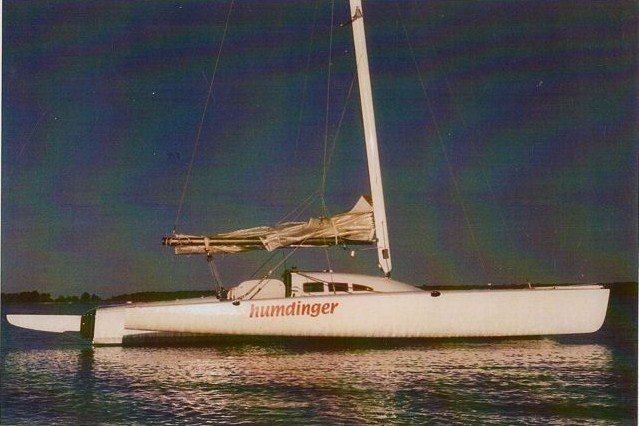 Hey guys, thanks for your kind words regarding the proasis project. Much appreciated and great motivation that you could take something from it and it even inspires someone!

I personally never understood why discussions up here and especially about proas are always so difficult. I like all sailboats, what counts is that someone has a benefit of them (let it be fun, fish/food, a job, transportation, accommodation or whatever).

Proasis is certainly not the most beautiful boat, but she's sailing, paid, and does her job by bringing us pleasure and the opportunity to work on a better future. After all we've started the entire project to support the Marshallese people (and many other around the world) to gain resilience against the affects of climate change.

Many people who see this unusual design (physical and virtual) stop by for a chat. We usually tell them about the Marshallese expression "Wa kuk Wa Jimor", which means "sailing canoes bring people together". If you think about it, thats a very deep meaning. It goes all the way from the community effort to build a boat over connecting people by transportation to this conversation right now. After all, we must realize that we have to come together to keep our tiny little space canoe called planet Earth in good shape for sailing the space ocean.

If even only a few go out of theses conversations with this in mind, Proasis is already a success.