new stiletto? any news on this cat?

Sea trials were supposed to take place this past July, no news from the company. Any insight out there?

Jay Phillips from Stiletto did a presentation in Newport during foiling week.

The 400 plus Stiletto owners used to have a great website and forum on a "Wild Jibe" platform. It had a lot of information, articles, photos of past Nationals, owner photos, refurbish and upgrade tips, and forum responses from Wormwood and others with significant Stiletto experience. Plus a good "for sale" section.

That is now all gone and cannot be accessed. I assume confiscated and shut down by the "new" Stiletto.

Last news on the website was that Randy Reynolds had joined the effort for the New Foiling version back in June. Great guy and has been around the cat racing scene forever and I thought that might be the impetus to make things happen.

Silence since. Lets keep out hopes up though. 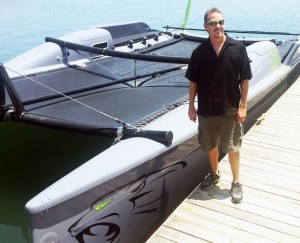 Stiletto Manufacturing Inc. is happy to announce that Randy Reynolds, designer of the R33 catamaran, has come aboard the Stiletto team as a product and class consultant for the new Stiletto X-Series Catamarans.

“When I saw the first press release on the new Stiletto, with her weight and foiling design, I had to get involved,” Reynolds said.

Reynolds has been designing sails and sailboats since 1974. His work includes rigs and sails for performance dinghies, monohulls, multihulls, windsurfers, and hydrofoil boats. In the 1990’s, he designed sails for Hobie Trifoilers. Reynolds’ design credits include performance sailboards, sailboats, and multihulls ranging from 8 to 45 feet, including the Reynolds 33 catamaran, which won the N2E race in 2005 and was Sailing World’s Boat of the Year in 2006.

“Reynolds enthusiasm for the new X-Series is highly validating,” Company Director Jay Phillips said. “I have immense respect for Randy’s experience on high performance catamarans and look forward to working with him on final rigging and one-design ideas.” Prior to Stiletto, Phillips served as a Project and Rigging Manager for Gunboat.

Reynolds co-founded the well-known sailing news website XSsailing.com in 2006. In 2009, he co-founded The Border Run, the largest point-to-point ocean race in Southern California, which gathered over 220 entries in 2012 and 2013.

“Reynolds’ passion for speed and his proven ability to get sailors out on the water is a good fit for Stiletto, where our mission is not just to build great sailboats, but also to make great sailors,” said Meg Phillips, co-founder and CMO of Stiletto Manufacturing.

Stiletto Manufacturing has a talented group working on the Stiletto X-Series, including Schickler Tagliapietra, who was involved with the G-4 project and the Luna Rossa America’s Cup program. Stiletto is also getting input on the foil design from the DNA team at Holland Composites.

Reynolds is excited about the part he will play in Stiletto design and manufacturing.

“It’s an aggressive program both in design and production expectations. All the boats in the X-Series should be rocket ships, based on my experience in racing and sailing cats of this size. I am an experienced ‘foiler’ and very excited about the Stiletto-Xf. I want to thank the Stiletto team for being included in the growth of this leading-edge and revolutionary boat.”

Foiling boats is a tricky market to get into. By the time you have put your chosen foil option into production - it could well be out of date.

Nothing is changing on the Flying Phantom. Those boats are still being built.Phantom International is building a new recreational boat. The Phantom Essential is geared for the average sailor to take his friends foiling. They are 2 different boats/2 different markets.

vmg said:
Foiling boats is a tricky market to get into. By the time you have put your chosen foil option into production - it could well be out of date.

I see that the Foiling Phantom has had a rethink after a short production run
Click to expand...

You mean the new boat? As far as I know they've done well with the original boat and have introduced a new ,less expensive boat that uses a different foil system to appeal to a different market.

Back to the topic.

Seems that they're priming a hull.

Best way to stay updated and complain about lack of info is through bookface.

Thanks for the lead on facebook. The priming vid looks recent (11/23). Did they assemble one of these and do any sea trials?

interesting topic. thanks to the author

nutfarmer said:
Thanks for the lead on facebook. The priming vid looks recent (11/23). Did they assemble one of these and do any sea trials?
Click to expand...

They are not that far along. As posted above, they are priming the first hull. Given the lack of photos and info, I'm guessing that they are still head-scratching their way through figuring out all the details. Designing and executing a trailerable multihull 18' wide, that's user friendly is VERY challenging. Having been through it myself, I knew that they were hugely optimistic with their launch date. It is going to be a cool boat when complete - the foiling package is optional. Unfortunately, I think that the first boat was ordered as a foiler, so the rest of production will probably be delayed while they sort through the foiling challenges.

I got a bottom of the page ad for the new Stiletto X Series on Audio Asylum this morning.

I'll have pictures and video to show as soon as the first boat hits the water. The exact date I can't say but I'm on call to get up to the factory as soon as this happens. (next 2 weeks) The first non-foiler will be out before the first foiler.

So it will be done in 2 weeks?

Projected to be done on Thursday but we'll see. The crew is working like crazy but is a new boat design, anything could happen. The updates on the "Sail Stiletto" Facebook page look very encouraging.

Very interesting link! (fldreamer) had no idea the Phillps were doing a charter biz in S Florida. They have taken deposits on the new boats, makes me wonder if they are in the 'upfront deposits' business. Takes a butt load of money to design a new boat, open a new boat factory and then get production going. I hope for the best and continue to watch.

Must be close to ready 2 weeks still?