new stuff in the a-class

Catnewbie said:
Working environment regulations could be another driver of progress.

In Northern Europe, when managing a composite boutique, you need to comply with a lot of regulations which prompt you to move toward "infusion" or "pre-peg" technologies, because safer for the working staff, and less expenses in fan &amp; related equipment.

Unless you accept your wet laminated cheaper boats to be build by kids in developing countries, without anything to protect them from expoxy vapors....the trend is here already.

Most of the time technological progress goes hand by hand with productivity progress, it was a bit the philosophy of the DNA project: To achieve a cheaper NIKITA with scale economy, using among other lean management approach for construction and so on.

AHPC are having their Vipers built in Thailand ___ HHMMMMMM

As are Nacra with the Infusion, N17 and F16, at the least. These are all wet layup boats though, AFAIK, and SimonN's detailed comments above apply...Thai labor costs are low enough to make the shipping worthwhile.

When will a decision for rule 8.2 be made? If the proposal to eliminate 8.2 goes through, when will it come into effect?


Step (1) has been announced. There are quite a few proposals for changing rule 8 - all with the required support from 3 national associations - to be considered at the Feb 2014 meeting.

The Australian Association will be voting on these proposals at the AGM in a couple of weeks time.IMO, the proposals are a real mess because there are a number of them and the way they are set out. Some of them are a "if this isn't adopted, how about adopting something else", which makes the debates rather difficult and potentially messy. I could see a point where 2 conflicting proposals are both passed. The problem is that when it gets to world council, we don't know how some will vote. It could be that although we prefer one option, if that was defeated we would rather vote for another which we might otherwise say no to.

What I find strangest about the letter from Thomas Paasch that accompanies the proposals. He argues that the uncertainty over the issue is killing the class. Well, if that is so, the idea that we should remove the rules for a trial period will make things worse, because nobody knows what will happen at the end of the trial period. If the rules revert to how they were before, then anybody who has spent money on boards and boats for the rule change will be left high and dry. Or we will have the situation where those who can afford to take the risk do so, while everybody else does nothing. Either way, few will buy boats in that period. Therefore, I think the idea of a trial period is really bad for the class.

I therefore think we need to sort this once and for all. IMO, changing the rules on the foils isn't the way forward. As has been said before, and by the DNA guys who have tried non class legal boards, the A simply doesn't have the righting moment (power to weight) to make them work. Based on their findings, and comments from others, I don't see the class "flying" because of the proposed change in rules. Therefore, it seems to me to be rather silly to change the rules, add potential expense, when the core goal will be missed. I suspect we will see some better downwind foiling in the stronger winds, but overall, nothing to get wildly excited about. Therefore, I believe that we should stick with the existing rules. If people want to experiment, there is nothing to stop them and I suspect they would be more than welcome to sail against the rest of the A fleet, but they simply won't be eligible for class prizes. That is, in effect, what we have now and what DNA did when trying L foils.

I agree with Simon - it's crazy to trail these rules. It's going to achieve nothing and going to cost lots of money for what!!!!

Blair, Peter and Glenn's new DNA's have arrived here in Auckland and I can confirm they are fully (stable) foiling with the new "J" boards.

The proposals don't generally conflict with each other. If a rule is removed then the decision about the trial period proposal doesn't matter.

But there is a possibility that the 1.5m restriction could be reduced in one proposal and also removed temporarily for a trial period in another proposal, which would create an anomaly during the trial period.

I agree that trial periods just extend the time that the class is in limbo over the rules and cause problems for everybody.

I also think that voting on these proposals could be very confusing for the class membership.

If the proposals get though the Feb 2014 meeting then the class vote will take awhile. The outcome probably won't be known until mid 2014.

I am wondering if any A class sailor tried to raise their daggerboards up (say 10-15 cms) while sailing upwind in fully powered up conditions?

So the problem with the proposed rule changes is that no-one really knows if it will work on the race course and where it will take the class. Even if they get through the AGM I'd vote against them for that reason alone, and my guess is that at least 34% of the fleet will think likewise and the rules won't change - but the foiling issue will not go away.

Surely what is needed is a consensus about the general parameters and direction of development, then a considered proposal (ie drafted by the technical committee) to support that direction as best the rules can be written. This current process doesn't do that in any shape or form, and is going to leave the class in uncertainty what ever the outcome

It has to run its course, but my plea is for the Association leaders to work out a contingency plan for the case that these proposals will not get through, and to setup a process that will get to a set of rules and proposals that specifically address foiling, These should and can be ready for the 2015 AGM.

By that time we should know if a foiling A class is viable (ie fun to sail, wins regattas, reliable, affordable, sailable by the club sailer etc).

I believe that Thing 1 is correct, in that when it comes to a vote by the whole class, I don't think there is any chance of any of these rule changes getting passed. However, it needs to be noted that it wouldn't be a vote against foiling but a vote against changing the rules. As has been pointed out in the past, it is possible to design a centreboard case which allows for L foils to be fitted to an A.

Contrary to what some might think, I do not believe that it is the potential of rule changes that is holding people back from buying boats. Instead, they are concerned that the class is entering a period of change which means that a new boat could be out dated in a matter of months. This is my concern. Money is tight for me and I cannot afford to buy a boat today that might well be out dated before the next sailing season. Even forgetting potential rule changes, we have a high degree of uncertainty over what is best with foils. The DNA camp are very excited by their "J" foils, with their website saying everybody thinks they are great, yet I know 3 world class sailors who have tried them and don't like them. As even DNA admit, the results have been inconclusive. I remain unconvinced, but not so unconvinced that I would bet $25,000+ on a new platform against the J boards. We will know more after the next worlds.

Changing the rules isn't going to change the uncertainty. In fact, it is going to make it worse. If there is a rule change or at least a vote on change following the NZ Worlds, I won't be getting a new boat for at least another 18 months. Why? Because we will see a whole new range of boats and you can be sure some will be better than others. I can't take the risk and will wait for the new boats to come along and get proven, with the next big championship being 2015.

After much thought, I believe that the current rules give us enough flexibility to experiment. If we start to see some ridiculous and expensive solutions to get around the "insert from the top" rule, we can modify the rules then. But as of now, we don't have a problem.

Both great reasoning. The development right now is going really quick. Unless you have a fair bit of cash, buying a new boat now seems like a bad idea. I've just brought a ASG3 with plans of trying different foil's to see if I can improve it's speed and thats still a fair bit of money to risk in the current development cycle.

As it stands, I would vote for no rule change. The current rules annoy me a bit, but we really don't need to increase the rate of change and uncertainty at the moment.

This isn't really new a class stuff, as everyone seems to be doing it now. But this is my take on a new rudder and winglet for my A. Rudder is extra long with about the same area as the flyer rudders. The lower part is very high aspect ratio as it is really just there to keep the L low enough down so that it doesn't jump in and out of the water on the windward side. The rudder is also modeled to fit into the flyer carbon cases. Hope it all works...

Not sure if many people give a shit. But I like looking at other people making stuff. So I'll keep posting my new rudders until someone tells me to go away.

Just popped two halves of a foil out of the mold.

They're a bit rough, but so are the molds, so what do you expect. So gona have to fair and paint to finish it all up.

Keep posting, lots of us enjoy looking at it! Being open with developments is good for the class anyway.

I'm just getting my head around your parts. Are they L foils?

Yeah sorry a bit confusing till I glue them all together. They are an L on the bottom of the rudder. I'm building the L because it is a lot easier due to the number of molds I have to make. I also like having just the one-sided join between the rudder and the foil. I will glue the foil to the rudder with and angle bit of carbon up the middle of both then fair them together. That way, again I don't have to build as many molds and I can test different foil angles relative to the rudder if I like. At this stage I am just going to 90degrees from the rudder. But may open this up a bit.

And you milled the molds how?

I didn't mill anything. They are shaped by hand with many guides to get shape right. hence no crazy curves, just nice straight edges.

Both winglets out of the mold now, cleaned up and almost ready to be glued together 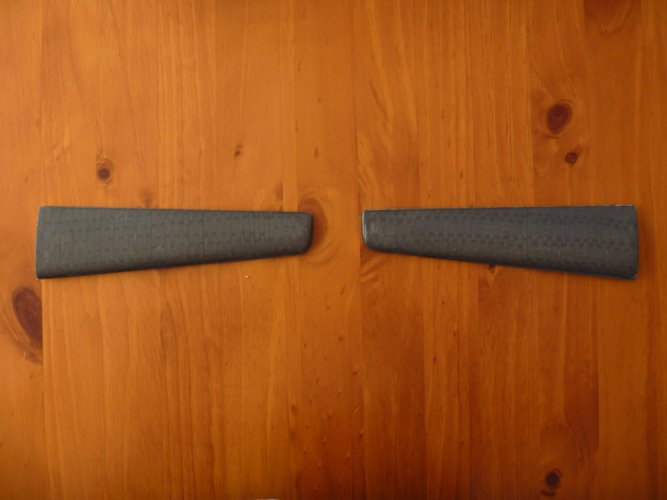 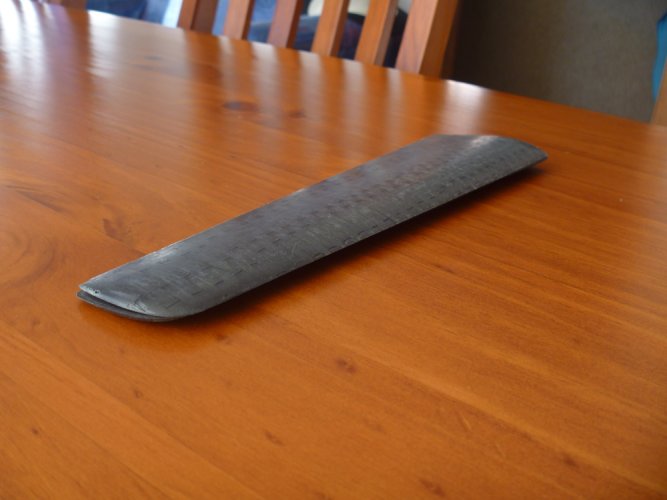 I think because it's an unbalanced layup, the tips have deflected upwards a little, either that or it's because the 45 degree layers aren't even enough. Should be too much of an issue once they are glued together.