Wetabehindtheears said:
I see a man on that boat.
Click to expand...

How can you tell? It could identify as a woman.  Just sayin...  Ask Caitlyn Jenner or the new star female swimming athlete at U of Penn.

Santanasailor said:
Its easy to get caught up in todays inclusive not inclusive, racist, sexist everyone who does not agree with me is an “ist” argument.  but consider what No Man’s Land really meant to million’s of men between 1914 and 1918 and how the term came into popular use.

Below is a picture of the area between the Axis and Allie’s lines at the battle of Ypres.  “NO MAN”S LAND”

That Mk 1 tank Indicates the picture is after 15th September 1916, also the day for the first death of a tank crew death, Cyril William Coles aged 23.

Less than 3years later my grandfather joined the Royal Tank Corps, to serve from 1919 to 1953.. starting out in a Mark 1 finishing with a centurion.

The Q said:
That Mk 1 tank Indicates the picture is after 15th September 1916, also the day for the first death of a tank crew death, Cyril William Coles aged 23.

Less than 3years later my grandfather joined the Royal Tank Corps, to serve from 1919 to 1953.. starting out in a Mark 1 finishing with a centurion.
Click to expand...

You could be correct, I was simply referring to the picture caption on the site and did not check it out thoroughly.

It's not sexist; it's just being Italian!

The OP's head is going to explode again


Sydney 38 class steps up to support women in sailing

The Sydney 38 Association has gone all out, chartering a Sydney 38 for an all-female crew to race at the 2022 Sydney 38 One-Design NSW Championship, to be held in conjunction with the Pittwater Regatta in NSW this weekend.

“We’ve taken this step to encourage women to sail in this Championship and other Sydney 38 events,” Class President, David Hudson, said.

“The Sydney 38 Association has chartered Calibre and we’ve sponsored an all-female crew to be led by Liz Charles,” said Hudson, who has been president of the Association since end of October 2021.

“I think it’s brilliant and we have the support and the interest of women in our class,” he said. 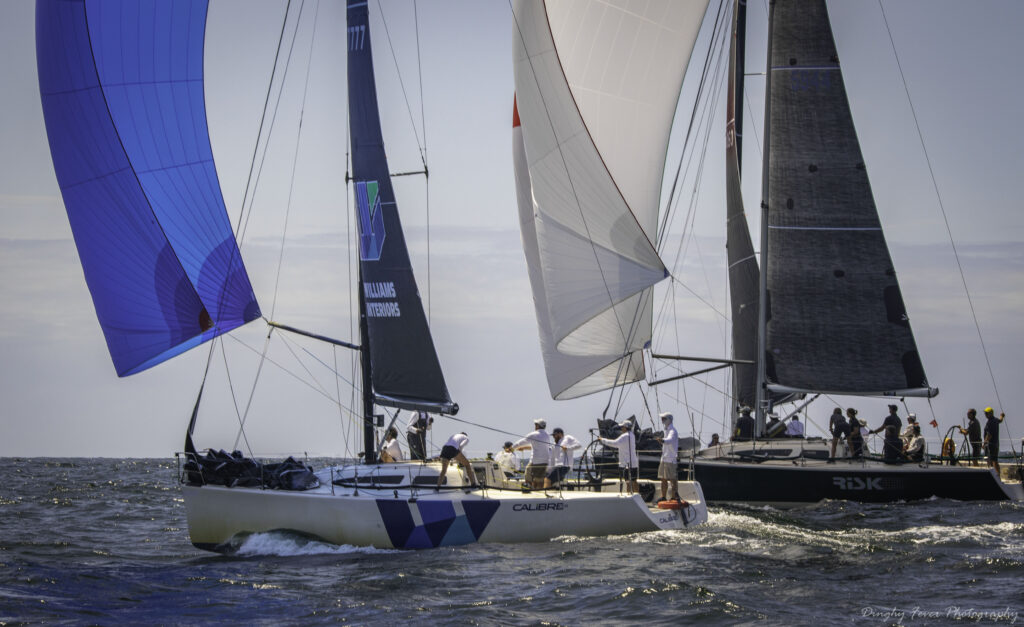 Charles has performed well as a skipper of the Azuree 46, Kayimai in women’s keelboat events, due to the generosity of the boat’s owners, Rob Aldis and Peter Byford.

Hudson said It was resolved at the Association’s AGM that the Executive Committee be tasked with finding initiatives to increase female participation in Sydney 38 sailing.

“This happened after being encouraged by Victorian Sydney 38 owner, Sal Balharrie,” Hudson explained.

Balharrie bought Bruce Taylor’s Sydney 38, Chutzpah, in 2020 with one thing on her mind. After cleverly renaming the boat No Man’s Land, Balharrie sent an email to a broad range of women, asking if they would like to learn how to sail. Within 24 hours, the yachtswoman had a core of one dozen women prepared to commit to learning how to sail.

At the time, Balharrie said, “I’m not setting out primarily to win trophies, I’m setting out to build a culture, to encourage and train women into sailing,” although the Melburnian does admit to a competitive streak.

Hudson says, “It was a profound discussion and we’ve done something about it. One of the things we are looking to do is to give women the confidence that they can own and run their own boats.

“For our efforts, we have two boats with female skippers for the NSW Championship.”

Mondo is the other, jointly owned by Lisa Callaghan, who habitually campaigns the Sydney 38 out of Manly Yacht Club, where she is President.

Seven Sydney 38’s are entered for the Sydney 38 One-Design NSW Championship, which will entail six offshore windward/leeward races over the two days. 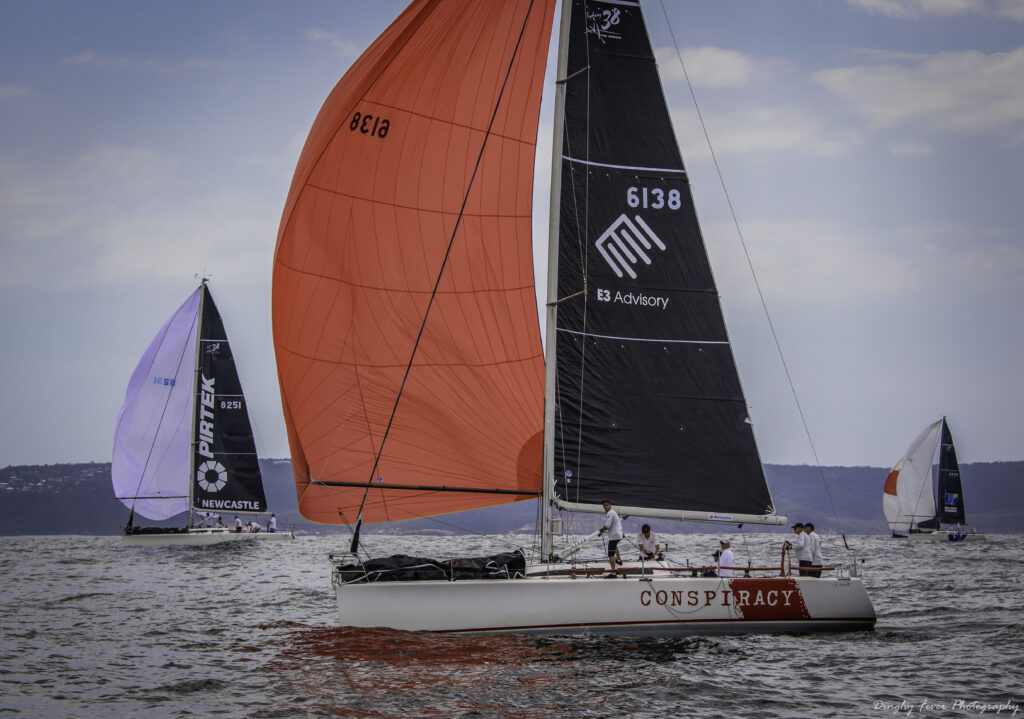 Hudson and Peter Byford’s Conspiracy is the boat to beat, as the defending champion of the both the Australian and NSW titles. And there is one boat in particular that is up to the job: Peter Sorensen and crew on Advanced Philosophy. ‘Sorro’ is renowned for his competitiveness in a range of boats from 16 footers to sports boats, one design yachts and in open yacht events, both inshore and offshore.

“We both have had pros on our boat up to now, but for this regatta neither of us do. All seven boats will sail with Corinthian crews,” Hudson said.

The quickly improving Phil Herscovics and crew on Shine On – Team Callendina may surprise. The remaining entries are Kaizen (Bradley Newton) and Thirlmere (Mike Logan).

“Although we have only seven boats competing at this Championship in this challenging environment, we have 19 Sydney 38’s regularly sailing at regattas and in blue water events throughout NSW,” Hudson ended.

Strategery said:
Any owner who chooses to use their boat name to promote gender bias should not be surprised at clap back from those they are choosing to ostracize. A good start for dialing down sexism might be to not name one's boat in sexist manner. Until then, you're just perpetuating the problem you claim to take issue with.

I sailed and raced on Sunflower for over 30 years. She was a cunt but sailed fast upwind and tried to kick you in the nuts downwind in a breeze. Took some tweakers and good helms people to tame that bitch downwind. I love her and miss her.

For a while there were boats named Sofa King Fast and Sofa King Slow on the racing sheets in Lat 38 but that was decades ago. Same owner I think with two boats.

Aft of the traveler..

CriticalPath said:
Absolutely but it's not like this is anything new.

Who else remembers the G&amp;S 30 with the controversial name at the 1986 MORC Int'ls in San Diego, and 1987 in Milwaukee?  Not known for it's performance (high rating + low speed = non-competitive), it was memorable for it's dump truck tow vehicle and the boat name swag they handed out (I lost my hat years ago).

After getting lotsa flak (sic) the boat was unceremoniously renamed the following year.  Sorry for the crap quality of the only pic I can find of Fear &amp; Loathing (sail number 007 ex No Fat Chicks) at the 1989 MORC Int'ls in Sarnia.

I think this boat along with several other MORC 30s are somewhere in Wisconsin now.

No Fat Chicks, aka Fear and Loathing and now called Vamoose is in Muskegon, Michigan with the sister to FLAK- Risky Business.

Any Cunning Stunts still out there?

Wasn't there once a breakdown of the sailboat crew? The helm was fantasy land, bow was dreamland, and pit was no-man's land? or something like that...

Curled up in the lee of Bum Island

USA 236 said:
No Fat Chicks, aka Fear and Loathing and now called Vamoose is in Muskegon, Michigan with the sister to FLAK- Risky Business.
Click to expand...

No way...Vamoose! Raced a couple of week nights with them when we took the IMS/IRC 52 Ptarmigan out to the lakes back in 2005. Owner was a true gent and showed us around the area and took us to dinner.

Peach pitter said:
Wasn't there once a breakdown of the sailboat crew? The helm was fantasy land, bow was dreamland, and pit was no-man's land? or something like that...
Click to expand...