Not Ready for Hillary

How about if they change the name of the PAC to the Ready for the Bitch Pac? 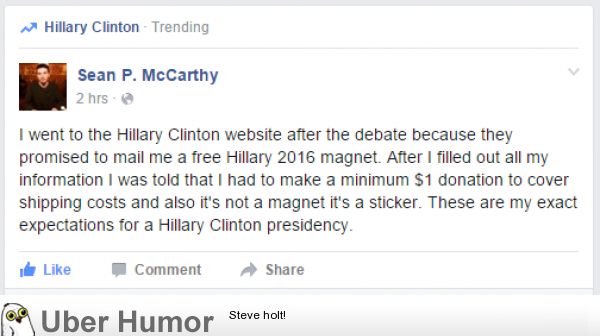 The sixty sins of Hillary.

1. When she was first lady, she murdered White House lawyer Vince Foster and then dumped his body in a park.

2. She drove Vince Foster to commit suicide through her temper tantrums.

3. She was having an affair with Vince Foster.

6. She murdered Vince Foster to cover up that she once bought a tract of undeveloped land in Arkansas and lost money.

7. She murdered Vince Foster to cover up her role in firing the White House travel department.

8. After she murdered Vince Foster, she ransacked his office in the middle of the night and stole all the documents proving her guilt.

9. When Bill was governor of Arkansas, she was a partner in the state’s top law firm, and it sometimes did work involving the state government.

10. She once invested in commodities futures on the advice of a friend and made $100,000, proving she’s a crook.

11. She once invested in real estate on the advice of another friend and lost $100,000, also proving she’s a crook.

12. Unnamed and unverifiable sources have told Peggy Noonan things about the Clintons that are simply too terrible to repeat.

13. The personnel murdered at Benghazi make her the first secretary of state to lose overseas personnel to terrorism — apart from Condi Rice, Colin Powell, Madeleine Albright, George Schultz, Dean Rusk and some others.

14. Four State Department staff were murdered at Benghazi, compared with only 119 others murdered overseas under every secretary of state combined since World War II.

15. She illegally sent classified emails from her personal server, except that apparently they weren’t classified at the time.

16. She may have cynically wriggled around the email law by “technically” complying with it.

17. She once signed a lucrative book contract when she was a private citizen.

18. Donald Trump says she “should be in jail,” and he’s a serial bankrupt casino developer in Atlantic City, so he should know.

20. She’s a hard-left radical who wants to break up the nuclear family.

21. She’s a conservative “mousewife” who refused to break up her own family.

24. When she was first lady of Arkansas, she pandered to conservative voters by dyeing her hair.

25. Before that, she totally insulted them by refusing to.

27. She spends too much money on designer dresses.

30. She yells into the microphone.

31. She spent 18 years in Arkansas and some of the people she knew turned out to be crazy rednecks and crooks.

33. She’s in the pay of the Chinese government.

35. In order to suppress the billing records from her time at the Rose Law Firm in Little Rock, she cleverly packed them up and took them to the White House rather than shredding them.

36. When she handed over the documents to public officials, they couldn’t find any evidence she’d committed any crimes, so she must have doctored them.

37. Congress spent tens of millions of dollars and six years investigating her investment in the “Whitewater” real estate project, and while they didn’t actually find anything, they wouldn’t have spent all that money if there weren’t something there.

38. By cleverly hiding all evidence of her crimes in the “Whitewater” affair, she caused Congress to waste all that taxpayers’ money.

39. When she ran for senator of New York, she was still a fan of the Chicago Cubs.

40. She once said the Clintons were thinking of adopting a child, and they didn’t follow through.

41. She was photographed holding her hand near her mouth during the raid that killed Osama bin Laden.

44. She’s really ambitious and calculating, unlike all the other people running for president.

46. She secretly supported a group that wants to give Maine back to the Indians.

48. She did her law degree at Yale, and it’s a well-known “socialist finishing school.”

49. When she was young, she did things to build up her resume rather than just for their own good.

50. When Bill was president, she “allowed” him to keep people waiting.

52. She’s an enemy of traditional marriage.

53. She didn’t divorce her husband.

54. His philandering is her fault because she is too strong, and too weak, and too frumpy, and too fat, and too cold.

55. She’s hostile to women who fool around with her husband.

56. A divorced taxi driver in Florida told me that if Hillary is elected president, “women will take over everything.”

58. When they left the White House, she and Bill bought a big house in New York that they couldn’t afford.

59. She sometimes calls her staff during dinner, even when they’re out at a restaurant.

60. She claimed there was a “vast right-wing conspiracy” against her husband, and turned out there was nothing but a bunch of tycoons financing private investigators, and some fake think-tanks and books and news sites and stuff.

61. When she got married, she didn’t “stay at home and bake cookies.”

62. She supported the Iraq War because she’s a secret foreign-policy conservative.

63. She’s a secret foreign-policy radical with a plan to impose worldwide “radical social experimentation” through the World Bank.

64. She is secretly plotting to let children sue their parents for making them take out the garbage.

65. She looked bored during the Benghazi hearings.

Those that love her will still vote for her even though she's behind bars. She has some of them here on PA. We know who you are even when you try to hide your true colors.
Click to expand...

I'll play along with your strawman mind reading horseshit... Why are YOU still going to be voting for her?

Those that love her will still vote for her even though she's behind bars. She has some of them here on PA. We know who you are even when you try to hide your true colors.
Click to expand...

I'll play along with your strawman mind reading horseshit... Why are YOU still going to be voting for her?
Click to expand...

Sorry Benwhine.....I wouldn't vote for her because she's a soon to be inmate.
Click to expand...

Is this where I am supposed to say we know who you are even when you try to hide your true colors?

Folding prop said:
Wrong again Benwhine. BTW how does it feel to be constantly on the wrong side of everything in life? Is that why you suffer from Liberal victimhood?

Obviously, you are just being an obtuse asshole. Not that I don't appreciate the effort, I just don't have time for it.

Run with that again.

Folding prop said:
Wrong again Benwhine. BTW how does it feel to be constantly on the wrong side of everything in life? Is that why you suffer from Liberal victimhood?

Obviously, you are just being an obtuse asshole. Not that I don't appreciate the effort, I just don't have time for it.
This could be time for a "You probably.... your Kenyan God.... Cankles.... etc."

Run with that again.

Benwhine.... are you suffering from microcephaly?
Click to expand...

No. I was just quoting you. 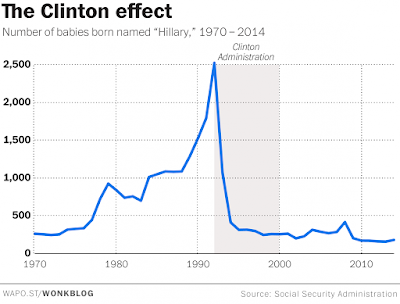 benwynn said:
No. I was just quoting you.
Click to expand...

Benwhine....then you suffer from either a microphallus or testicular feminization.
Click to expand...

benwynn said:
No. I was just quoting you.
Click to expand...

Benwhine....then you suffer from either a microphallus or testicular feminization.
Click to expand...

Cool....so you eat frozen pizza, drive a Dart, and hang wall paper for a living.
Click to expand...

...Libby Watson of the Sunlight Foundation told the Daily Beast on Thursday that FEC loopholes allow the Hillary Clinton campaign and David Brock’s Super PAC to coordinate with one another, despite the Citizens United vs. FEC Supreme Court decision prohibiting a Super PAC’s independent expenditures from going directly toward a particular candidate.

“It’s not totally clear what [CTR’s] reasoning is, but it seems to be that material posted on the internet for free—like, blogs—doesn’t count as an ‘independent expenditure,’” Watson said. She continued by addressing the unprecedented nature of the project....
Click to expand...

So social media shills are being paid, but because they don't have to actually pay for each post, paying the shills is not considered an "independent expenditure" by Brock's group on Clinton's behalf.

So at least with respect to those people, the campaign can coordinate with the Super PAC legally. On other issues, I suppose they will still have to do it illegally.