boomer said:
Running late gotta be down to the boat in 15 minutes...later... 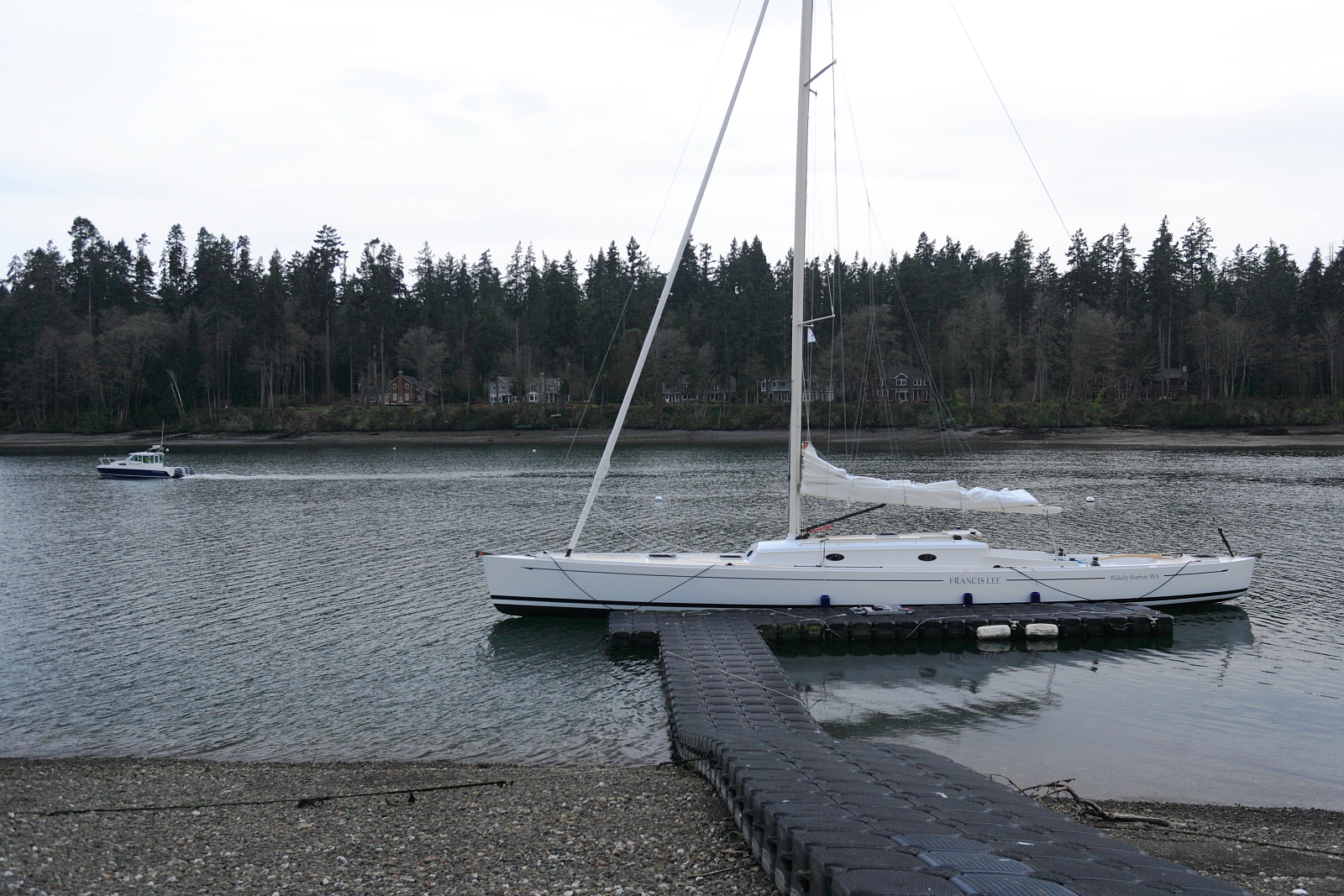 
That is one beautiful statement at the end of your dock, Kim!

Bob Perry said:
When those pics were taken we were moving through the lee of that C&amp;C. Then we were hit by a wake from a passing ship. The C&amp;C started bucking and stopped dead while we hardly moved and shot right through her lee. We did not slow down that I could notice.
Click to expand...


Wait a minute, you mean that Herreshoff guy was onto something with that Roz-shape....who knew ?

Thanks for taking us all along for the ride.

Now that it's afloat for the "general public" to see and ask about, - and knowing how much the GP loves lables, you ARE going to get asked frequently "just What Sort of boat IS it ?"

I suggest compiling a list of really strange types:

just to see the reactions - most people will nod knowingly and say "ah, yes..." then wander away, very confused.

There is a neat old book called "To the great Southern Sea" - (or something similar) about a guy cruising with his family and 2 hands on a 100 foot schooner (very well appointed and equiped for the era - early '50s) - and when they travel abroad they get asked often 'how many crew' -- and just as often find people shocked with the answer of "5" - everybody thinks a boat that big would be meant for more like 20. The decadence of such an indulgence...( heck yeah ! )

Much like this boat, I think people will expect a 60 footer to field a crew large enough to have a full-court basketball game, so learn to enjoy the facial expressions when you answer that it's a short-handing daysailer - because most folks just won't Get It. At first. or maybe At All.

But then, as Bob like to channel Dr. Frankenfurter: " I didn't build him for YOU ! "

"It's the new model from Sandoz Laboratories"

Sorry if I sound like a smart-ass, I do really like the atypical nature of the boat.

I wonder how many times the Issacsons have tried to 'explain' Q - their 40' Schumacher daysailer ?

As much as that, seeing it go from dream to dock-side was a lot of fun.

There was a crew from a C&amp;C 25 at the dock when we came in yesterday. They came over and started asking about the boat. I told them it was a daysailer for an old guy. They looked confused as all six of them piled back onto the C&amp;C 25.

Never much cared for the look of Q.


WHL said:
Good news Kim. This will be very interesting and probably an incredible result.
Click to expand...

Go back and read Kims first post yourself, see how close to the mark it was.

I think that this basic concept came together very quickly. I'd say in one week we had the basic boat nailed. It helped that Kim and I shared a love of double enders and a common language in notable DE's from the past. In short, we spoke the same language right from the first meeting. It was really a pretty easy process. Kim didn't care at all about the interior. I had to talk him into a head.

I remember a college prof lecturing on the Cavalier poets, "They labor for days to make a poem sound as if it were written while falling off a horse."

I've fallen off a horse. It's a surprisingly long way down. Knocked the wind out of me. Made me feel alive.

Also, it's easy to wrap this project up in a romantic vision of me and Kim huddled on a rainy PNW day imaginging double enders. But in fact there was a big team involved. I just keep forgetting to mention that inconvenient truth. So to the guys behind the scenes who made this dream a reality kudos and thanks to you.

The first thing that she reminded me of was a Lightweight Sharpie, not many other boats around these days so long and thin with a jib tacked aft, and boom finishing so far forward I just hope the crew are a little more reserved than the average sharpie sailor, although your floating dock looks good for a naked slip and slide

That pic looks great. If my knees still worked I'd be out there on the wire with you. Now, I'm "reserved".

In many ways you are right. We have a very hard turn to the bilge sop the overall hull form is sharpie like.

Welcome to SA/CA Michael and thanks for the kind words.

You must post a pic of tits to be accepted here. It's sort of a ritual we have. But once you have done that we will embrace you as a bro.

Sequence of my daughters images. I shouldn't be editing her images, because I'd rather she edit hers. She's coming up tomorrow and will post more of hers after she edits them. She makes me proud for a variety of reasons, and photography is one of them. She's 31 and took up photography when she was 12 old style on film using a variety of lightboxes.

BTW Kim had a huge load of supplies, material and what not stowed below midships and aft. He probably had quite a job unloading all that gear today. There was negligable gear stowed in the bow other then the mast jack and a hydraulic Enerpac and shims. So I imagine she'll trim a bit different for our next photo opportunity. I'll be posting more pics through the week as they're edited. Up early and on the water yesterday shooting and racing today till around 3:00, race committee set a long course up sound to Possession Bell Bouy then over to Scatchet Head Bell Bouy, then back to Edmonds. Which was fine, but I'm thrashed. So patience please, I will post more pics.