kimbottles said:
I think my 3000# Navy Anchor would be enough to hold the house…..
Click to expand...

You may be right.  But Steve's tests have shown that reasonable anchoring assumptions are not always proven correct.

So I reckon that you need to get @Panope to come down with his winches and load cells, and drag your house around in different directions, to test the holding.  Meanwhile, you should hook your bedroom up to a Mantus Dinghy Anchor, just to be sure.

TwoLegged said:
You may be right.  But Steve's tests have shown that reasonable anchoring assumptions are not always proven correct.

So I reckon that you need to get @Panope to come down with his winches and load cells, and drag your house around in different directions, to test the holding.  Meanwhile, you should hook your bedroom up to a Mantus Dinghy Anchor, just to be sure.
Click to expand...

Steve was here just the other day. Not only is he a very clever guy, he is a really very nice clever guy. Great friend to have.

I will ask him if he is willing to drag my house around to test which anchor to use for it. (I think the big Navy will be enough.)

kimbottles said:
First we have snow and then tidal overflow follows on…..

Another few sections will help it all clip straight onto an upstairs window of the house.  Then after another few weeks of global warming, you can wake up in the morning and walk straight out of bed onto the boat, with no need to stumble down stairs.

kimbottles said:
Steve was here just the other day. Not only is he a very clever guy, he is a really very nice clever guy. Great friend to have.
Click to expand...

In his videos, Steve comes across a really nice guy.  It's lovely to have that confirmed.

I have never once clicked on this thread, always thinking it read “Silver Class”, wondering what in the heck that (Silver) meant.  Now I see that it’s in fact “Sliver” class.  But I still have no idea what this 10+ year old thread is about!

Jud - this thread is it originally about Kim's sailboat.  It is a Bob Perry design, nicknamed "sliver class" because it is long and thin - if memory serves 60 x 11, approximately, but I'm sure Kim will be along with accurate numbers.  It is a gorgeous build, strip plank built, to very exact design parameters.  The thread is worth the read, and if you are in the neighborhood and can beg properly Kim might show it to you - I had the honor while it was not yet mated to the keel.

As with all cruising anarchy threads, the drift factor is big - mostly still related to the yacht, or things Kim related (such as his huge collection of anchors, second only to Steve - and I think only West Marine beats Steve.

Jud - s/v Sputnik said:
I have never once clicked on this thread, always thinking it read “Silver Class”, wondering what in the heck that (Silver) meant.  Now I see that it’s in fact “Sliver” class.  But I still have no idea what this 10+ year old thread is about!
Click to expand... 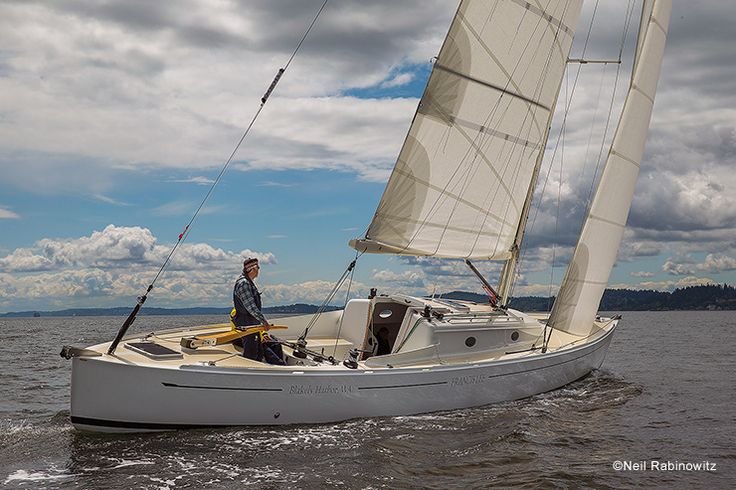 @Jud - s/v Sputnik, this thread is about poetry.

Or rather, it is about how two old friends made a piece of poetry.  Kim Bottles spent a lifetime sailing and studying skinny boats, and with his friend Bob Perry they eventually produced a work of art.

Francis Lee (aka "Frankie") is an unique and amazing boat.  She sails like a rocket in even a zephyr, with little effort and no wake; she looks stunning, and is so perfectly proportioned that it's hard to tell her size.

Tiller steered. Simple, narrow, light and a joy to sail. 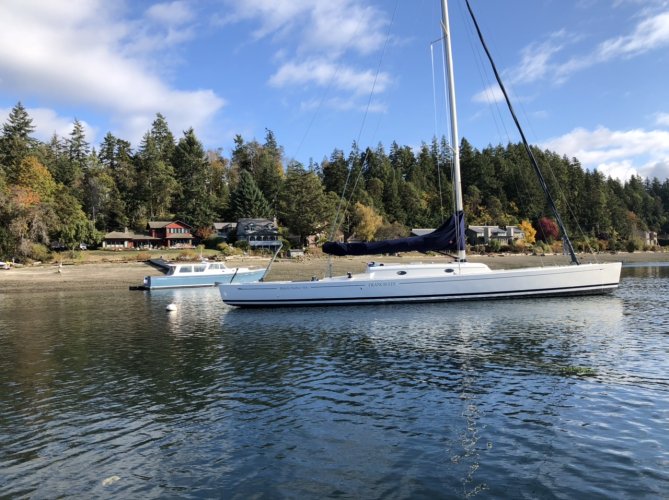 Are you still using a Farr 40 Main?

SloopJonB said:
It is a complete Farr 40 rig isn't it?
Click to expand...

Shortened spreaders of course and non Farr 40 boom. We do use the Farr 40 mast jack. Never had a Farr 40 mainsail. Had the Schattauer Sail Loft in Seattle just make us some standard Dacron sails. Our “E” and “J’ are both longer than on a Farr 40.

TwoLegged said:
In his videos, Steve comes across a really nice guy.  It's lovely to have that confirmed.
Click to expand...

I'm fortunate to have met him briefly and discuss a boat build. He is genuine and I don't think has ever met a project he didn't want to take on.

The reason I believe this it's likely to have been a remedy is that this rig had been subjected to an optimizer that, given the rig &amp; deck dimensions, and working from the forces, for every wind speed and angle, delivered by a proven VPP, varies the spreader heights and standing rigging to find the lightest configuration that handles all of the worst cases of sails set, wind (with a sea to match), heading. reef, and speed.

A large safety factor is added

Even if such a rig could be lightened with  that sort of strut, the resulting danger and inconvenience is unlikely to be justified on even a very large yacht, and if its not a remedy, why not trust the optimzation already done?

It does look interesting (like the mule). Until you look along the passage between the shrouds and the deck paraphernalia. Just the shroud bases and the most inward angled lower shroud can range beyond irritating and anxiety.

Of course a single drawing or photo can mislead.

At least guessing wrong ensures I keep looking.  After reading Y-M Tanton's .docx (on his site blog) on B-R rigs, I understand why the struts are needed (but not necessarily adequate).  They are not a remedy for poor yacht design.  The design of the B-R rig scheme leads through several seeming improvements to existing spreader and shroud configurations that in the end require strut assistance.

[As an analog think of how returning a halyard over a pulley back toward the deck doubles that halyard's necessary compression of the mast - so if you trust a non-pulley mechanism to trap (and release reliably) a single halyard length's tension at its peak, there'll be only one line pulling down rather than two with equal force.  Adding a seemingly helpful wire to a truss-like structure, that pulls against another leading in another direction can as much as double the compression force "inward", say at the tip of a spreader that must then be itself bigger and heavier, and which thrusts harder against the mast, exactly when its opposite is likely under much lower compression]

The filling in of the spreader/mast/shroud with more connections leads to a first segment above the deck which is "too long" and could buckle without the struts.  It still could and apparently has.

The yacht designer's colleagues, various salesmen, miracle engineers, the owner, the builders - one or more may convince or constrain the designer to incorporate such a special innovation.

After a rig has gone over, subsequent owners may be looking for better struts, braced struts, struts for struts, rather than an entire rig.

The very-swept spreaders (and the extra wire back down and in - that from the first spreader helping to block the boom), as others have noted here, are at least a problem in heavy air when keeping the main way forward to avoid a broach.  But there are few sailboats that would best go dead down in such conditions (there's never an obstruction when sailing), and in heavy (and middling) air any course even modestly above dead down and the apparent wind angle is going to come way forward.

The swept spreaders might allow eliminating the backstay, but then ...

The struts are a would-be remedy for committee design.  And a push to learn an acrobatic dance move going forward - though on a 100' yacht there might be space outside the shrouds

Hunter used struts on a few of their boats. I can think of two reasons.

First, Hunter hated to pay good $$$ for stability. A lot of their keels were iron, and a lot of their boats were tender. It's easy to believe that the struts were a cheap way to improve stability with a lighter rig.

Second, the struts may have made it feasible to use a mast section that was cheaper or more convenient, e.g., one that was used on a smaller boat or a previous model. Similarly, in one of the histories of C&amp;C that can be found online, it's noted that C&amp;C stretched the used of a particular mast section to a bigger boat by adding more wire aloft. 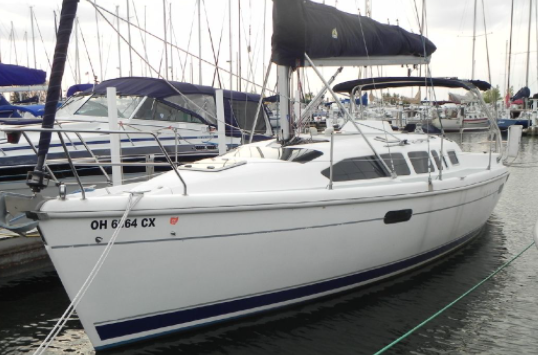 For a boat where the struts obstruct crew passing fore and aft, which is a significant danger, perhaps a solution is as follows: free the struts from the mast and rotate them outboard to 45 degrees; anchor them by cable down to a reinforced point at the rail; 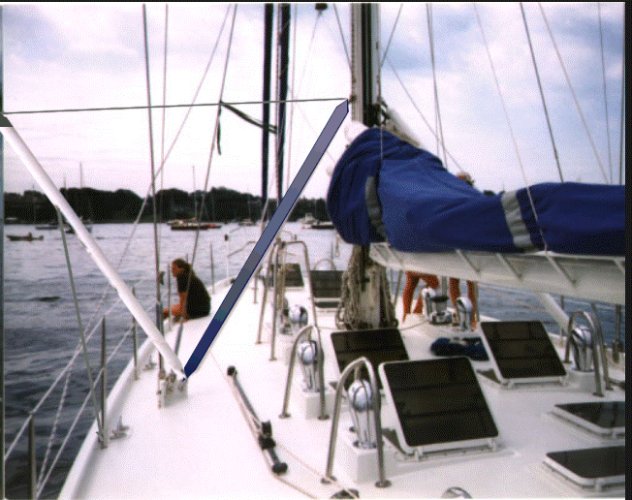 cable their upper ends to their original attachment point on the mast.  As for broadening the shroud base on Open 60's.

They no longer block the way.

Substituting tension for compression would present no loss in potential force and strength.

In close quarters, eg docking, they could be brought upright.

We had an extreme low tidal condition these last couple days here in Blakely Harbor.
FRANKIE managed to stay floating free even at a minus 4.26 tide. But I doubt there was much more than 6-8" under her 10 foot deep ballast bulb.

Fortunately our beach has a steep drop off once we get to zero and minus tides. The Hadlock Skiff had plenty of water. She only draws about a foot with her outboard tilted up.

Last time we had tides this low FRANKIE was just a dream floating around in my head. Ten feet, you say? That’s some drop off.

Magnificent opportunity to pick up all those bits and tools you dropped while walking along the dock.

I figure there are enough parts dropped off docks and boats at my local marina to build three boats....

kinardly said:
Ten feet, you say? That’s some drop off.
Click to expand...

There's a lot of that around here.