Hey Bob Perry, what's the height of the V40 PH from keel to cabin top for transporting purposes?

Dave J said:
Thanks for the links, Norse Horse.  While the Calkins is an interesting boat, I'm not ready for a wood boat.  My brother has a 30 ft Bolger cat yawl that was designed and built for him about 27 years ago.  It's been pretty reasonable for upkeep but I'd really like to minimize that kind of maintenance at the moment.

I'd forgotten about the Newport 33 pilothouse.  With a raised saloon, it looks airy.  I do like Gary Mull designs.  Possibly an autopilot remote could work from the cabin.  I saw an ad for the 39 foot version of this boat for sale a year or two ago in California.  I think it started out at $110K and was working it's way down past $80K by the time I stopped tracking it.  Not too many were made from what I understand.  I'll have to do some research on the 33.

I've always liked the look of the Gulf 32 but hear varying reports on its sailing abilities.  I talked to an owner about 10 yrs ago that sold his Westsail 42 to a young couple in Alaska provided he'd accompany them on their trip with the boat back to Alaska.  His replacement boat was a Gulf 32.  He said on one stretch, they got into the roughest water he's seen and the Gulf seemed to handle it much better than the Westsail.  I guess that doesn't mean it sails well, though, since they were probably motoring.  Other articles have indicated how when rough, it can punch through the chop sailing where lighter boats slow down.  I guess that doesn't help with the light winds around here, though.

I looked at the Cooper 353 yesterday.  I didn't particularly care for it.  Probably more a case of this particular one.  It seemed too dark inside due to the dark woods, dark fabrics and small ports down below. I had the same feeling when going on an older Gulf 32 pilothouse a month ago. I wonder about spending time down there with our typical gray winter weather.  The lower edge of the forward facing windows were pretty high.  I don't think I'd be able to see anything low in front of the boat for maybe a mile out.  Cracks on the plexiglass side windows.  It also seemed to have a lot of freeboard and with my wife's knees, we broke out a ladder for her.   I wonder about docking in a crosswind with the freeboard and pilothouse height plus just the aesthetics.  It does make for a reasonably large interior.  I liked a raised cockpit platform behind the wheel to allow seeing over the pilothouse.  Unfortunately, the cockpit canvas was too low so I couldn't stand up without hitting my head.  I won't cross it off my list just yet, though.
Click to expand...

The Cooper 42 is dark inside as well. The headliner has a pin hole pattern material that is perforated and sometimes that does not age well. The 42 does feature a bath, haha. The windows might be tough to replace and require custom units. My friend considered double glaze custom units in that case. If the ports are old, larger ones could be used for replacement.

This Bill Garden Truant might be a consideration. New engine, diesel heat, up by Nanaimo...https://vancouver.craigslist.ca/van/boa/d/truant-33-pilot-house-sailboat/6353751222.html

Once upon a time someone told me that at least some of the  Cooper pilothouses were built by Bayliner. Or maybe I saw that on a forum somewhere.

Regarding the Rawson... yeah, you'll not spend nearly the $$ for a Rawson 30 PH that you will for a Pacific Seacraft. If 90% of your sailing is in a straight line for long periods of time, then that sounds good to me.

I find the Truants/Saturna's interesting.  My favorite one was the 37 but that recently sold.  I don't see too many production boats with rounded transoms.  I wanted to sell my 20 ft fishing boat first, which I did a couple of weeks ago, plus I wasn't sure if I wanted to go that large when it was for sale.

My understanding is that Bayliner bought the molds from Cooper and produced them under their Bayliner US label.

Yes, this Cooper had the white perforated headliner, too.

We'd do a fair amount of tacking in our local waters so I keep shying away from full keels.  I may have to compromise for a pilothouse. 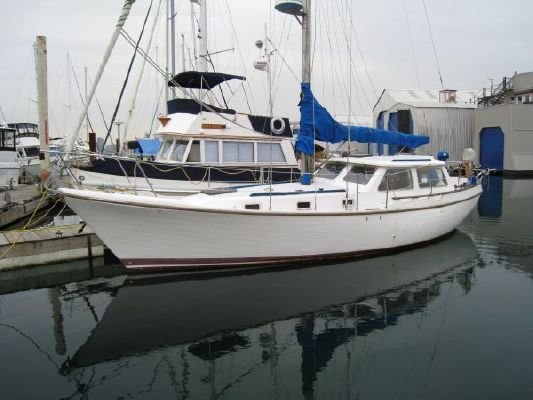 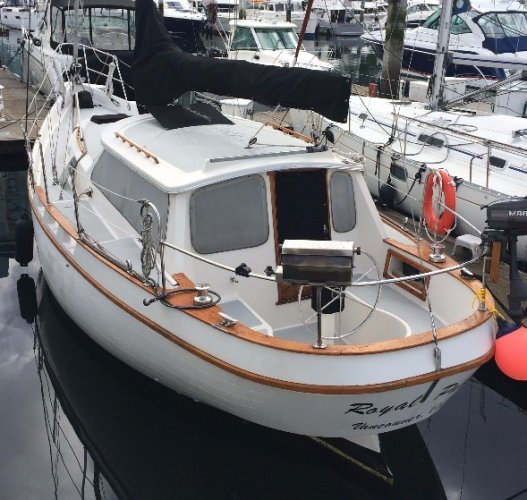 Veeger said:
The Coopers I saw or sailed on,  (35 and 50), many, many years ago, we're, umm marginal.  They'd do the job but...   Ditto for the Newports.  The 30 and 41 had plastic thru hulls and I don't mean Marelon, I mean, like, cheap plastic!  The Truants are intriguing but I've never been aboard one.
Click to expand...

With that high bulwark and strong sheer, I don't think the sightlines from the PH are very good.

Ishmael said:
With that high bulwark and strong sheer, I don't think the sightlines from the PH are very good.
Click to expand...

Probably true, I've seen VERY few so called pilothouse sailboats with more than minimal to downright marginal views forward.  A decent dodger is usually better but, we're now perilously close to drifting towards that other thread...

Stole this from the Craigslist not mocking thread.  If you're not getting one of Bob's PH designs, that actually sail well, and are thinking coopers or rawsons, etc that don't...As you'll be motoring most time anyway,  why not just do this?

Crash said:
Stole this from the Craigslist not mocking thread.  If you're not getting one of Bob's PH designs, that actually sail well, and are thinking coopers or rawsons, etc that don't...As you'll be motoring most time anyway,  why not just do this?

I'd allow for 13' depending on what gear is left on top of the PH.

The Forest service vessel looks perfect to me.  Heck of a price.. You sure don't want to end up with a boat that doesn't sail or motor well.

Crash said:
Stole this from the Craigslist not mocking thread.  If you're not getting one of Bob's PH designs, that actually sail well, and are thinking coopers or rawsons, etc that don't...As you'll be motoring most time anyway,  why not just do this?

Pardon my "French" but oh FUCK, yes.  I have friends in Port Townsend with a 40's Monk cruiser and I love that boat. I'm not a big powerboat guy, but gorgeous is just gorgeous no matter what.

the fisheries guys must thought they had the world by the tail!  rather than working in a commercial/fishing style steel-everywhere boat they were working on a yacht!

Thanks for the measurement info, Bob.  I'm still thinking about that V40PH with blisters I mentioned earlier and having it trucked up here.

Not a great shot and an old one from when I kept the hard dingy forward of the mast in my first year with the boat. But the visibility forward in my pilothouse in quite good. Granted, at 6'4" I have great visibility everywhere I sit.

Even the salon benches are elevated up so that my head almost hits the ceiling and everyone can see quite well from inside. 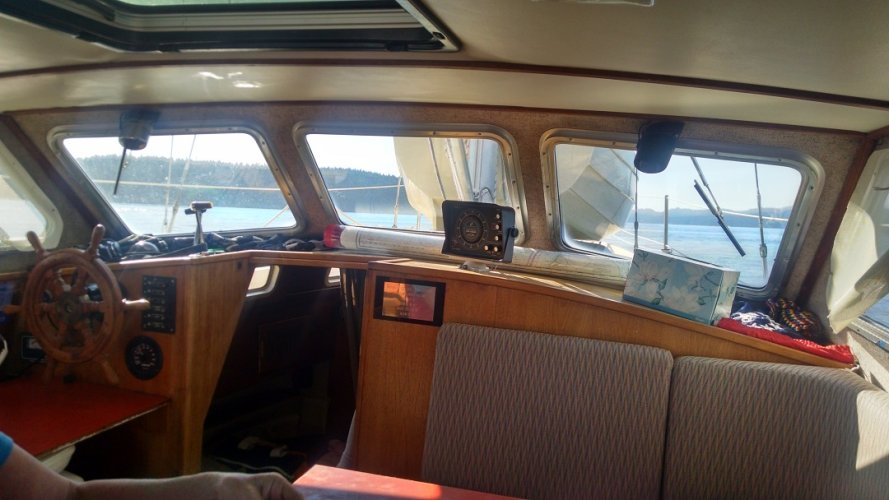 Sure is a good looking interior and view on your North Sea 34.  Have you tried sailing from inside and if so, any thoughts on it?

How about Cascade boats?  I've read they're very strongly built.  Maybe somewhat narrower with less interior volume but with fin keels, they could be reasonably fast. Sounds like many have made ocean crossings.  My preference would be for a factory completed boat but some owners can finish off boats very nicely.  Has anyone heard of problems or negative traits? 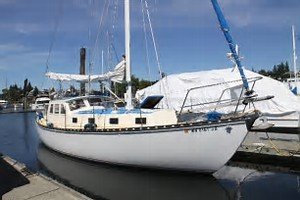 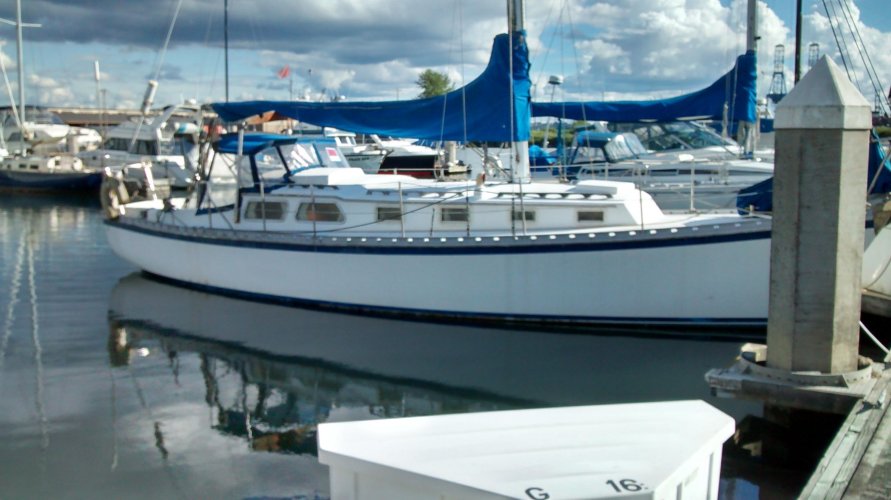 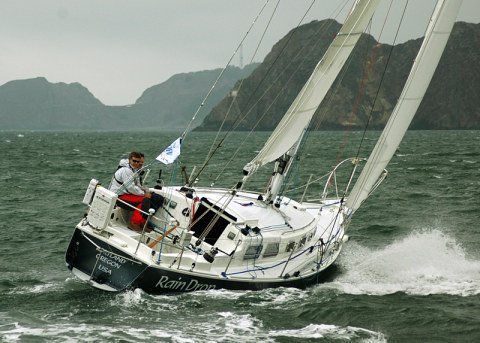 Dave J said:
Sure is a good looking interior and view on your North Sea 34.  Have you tried sailing from inside and if so, any thoughts on it?
Click to expand...

Actually I have. With the cabin roof hatch (24X24) I can see the main and even with the cutter rig I can still see both sets of telltales forward. I have not tried to do it for extended periods, but while making coffee or lunch it works very well.

I was planning on doing RTC next weekend but hernia surgery has scrapped my sailing plans for a month or so. I have been slowly (too slowly at times) getting the boat dialed in for distance racing. Not quite finished but close enough that RTC would have been a good test.

The boat seems to really like being cracked off of close hauled just a bit and tracks very well there. Close hauled she is a finicky as all get out and really requires your full attention. The close hauled groove is very small and the hydraulic steering has a few seconds delay, so you have to anticipate the changes.

Right now it has hydraulic steering at both helms. The winter plan is to pull the cockpit helm and put in the emergency tiller access and sail with a tiller before putting in the cable/chain pedestal. The hydraulic steering is a bit of a "dead stick" feel with no feedback from pressure on the rudder. I am not a fan of that.

Somebody had to, so I guess it's me. 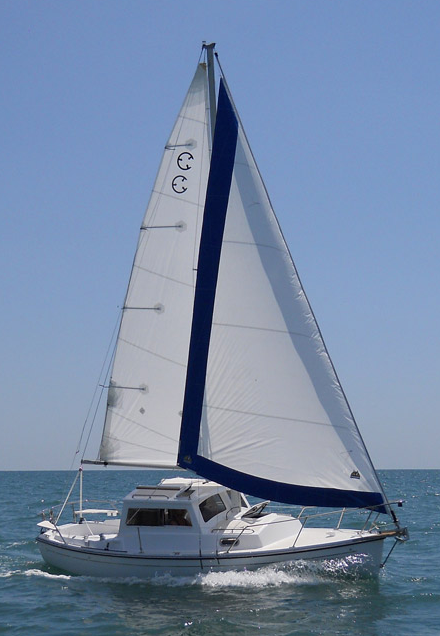