BTW, again....there's a free Piper 24 available in Southern California. "FREE"....right. It needs work. On the other hand, this is a very simple boat. I've been "at it" for so long because I had other things that were taking my time.  Dedicated weekend effort and a few thousand bucks would have this boat sailing (with secondhand sails)  in 4-6 months.

There's a freebie ad in the Classies for the Oxnard boat.  BTW, anybody that drops by here looking for more Piper pics because of the advertisement....Pipers are old-skool laid-up fiberglass. They're solid glass hulls and glass/plywood cored decks. There are a few partial bulkheads of plywood. I can show you picture of how the floorboards go in, but I have no idea if there are floorboards in the Oxnard boat.

Incredibly, another Piper OD has cropped up in New York. It's available...for free.  I don't know if the outboard motor comes with it, what a godawful installation, but hey. Diffr't strokes and all that.  It's in Kingston.

Damnit Alan, stop tempting me with all these free Pipers...they are way too good looking!  I grew up 15 miles from Kingston, and learned to sail on a Blue Jay at Kingston Point on the Hudson River....

That outboard looks big enough to swap the stern  :blink:

Crash said:
Damnit Alan, stop tempting me with all these free Pipers...they are way too good looking!  I grew up 15 miles from Kingston, and learned to sail on a Blue Jay at Kingston Point on the Hudson River....

That outboard looks big enough to swap the stern  :blink:
Click to expand...

PLEASE take the Piper in Kingston!  Just....uhhh....um. Do something different for outboard power!  LOL..

Seriously, please save that boat. I'm pretty surely going to be a stupid idiot and take the one in Oxnard, so that I'll own two of them,  but I can't drive across the continent to save the one in Kingston unless a fortune drops out of the sky into my lap!

Except right now I live near Thousand Oaks, Waaay closer to the Oxnard boat then the Kingston one.   And...I just sold my First 310 because I wasn't using it enough to justify the cost of keeping her.

Reality says I'm 4 or 5 years out from my next boat purchase....

Been working on A.) prepping the bottom for another barrier coat and paint  B.) the topsides for paint C.) getting the lifting  bridle/sling set up.  and...last weekend I finally pressure washed the deck.

It was gross.  You can see that some of the anti-skid blasted right off. I'll have to repair that at some point. I've now sanded, sanded, sanded some more and then sanded some more. Idiot Me missed two sheerline *dings* so I will go over them with epoxy and fairing compound and then....more sanding.   But...I'm almost done, sanding.  The topsides paint and primer arrived yesterday. Idiot Me forgot to order brushing thinner, so I'll get it from Svendsens, along with a couple of 14 mm Antal low friction loops for the jib sheet twings.

I have enough blocks in the junk box to cobble together something like a mainsheet system for launch day.

I also have two headsails that will "work" but as you can see from this photo... 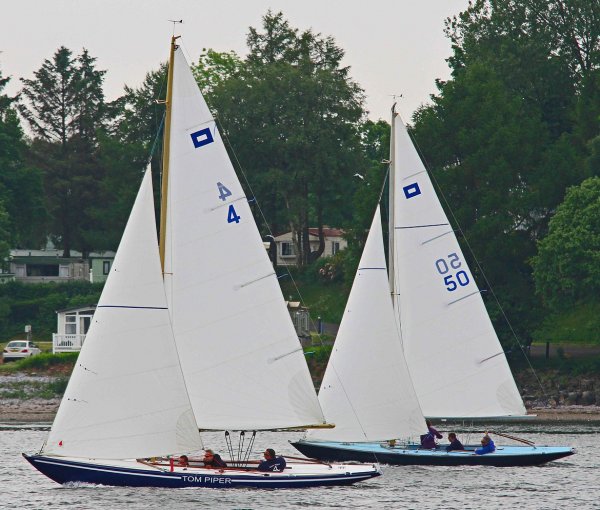 The headsail hoist pretty short. What I have will go all the way to the hounds, so I just trimmed a foot off the bottom of one of them.  Excess cloth got turned into corner patches.  With the purchase of another spool of sailmakers thread and finishing tape from Sailrite, I now have a working jib of approximately the right dimensions.  These sails are made from lighter cloth than my bigger boats' sails, so my home machine can deal with it. YAY.

It feels very self-centered to post this right now, but while the world is massively screwed up, good things DO still happen. I'm incredibly angry about the Ukraine invasion, as well as other rampant stupidity I see daily in the news and on FB. Still, I'm making some progress on my self-centered, pointless boat front.  I'm scheduled to get the boat to the yard a week from today. They'll pluck the boat off the trailer, sand off the rest of the bottom paint that I can't get to, and roll on a coat of barrier coat.  Did I mention that the boat had blisters?  Read on for more about blisters.    After that, they'll roll on a two coats of ablative bottom paint. I'm trying to decide between black, blue and green.  There's a white bootstripe you can't see in the pictures as the painters tape is over it.

I filled about 50 blisters but there were hundreds of little ones that weren't worth filling.... I didn't count them.  Round One was epoxy and fairing compound, which took care of most of the little ones. The 15 or so big muthuhs got that, then a little smear of raw epoxy a week later, followed up half an hour later with having some of that underwater epoxyputty stuffed in them. That's all been sanded down to something like acceptable, but this will never be a glassy bottom. Then again, it's a 55 year old boat.  The hull is dry, I mean, it hasn't seen water for at least 30 years until I've been pressure washing it.  So I figure that with a barrier coat, I'll probably be fine for the few months the boat will be in the water, until I get a slot at the hoist.

It would have taken me at least triple the time to get every single little "dish" faired out, and most of them I couldn't even see until the glossy stuff went on.  I have to remind myself that the boat already looks a WHOLE lot better than it did when I got it, so I will be happy with my "ten foot paint job"

What you can't see is the 100-150 little flies that committed suicide in the wet paint in the port aft quarter of the hull. I have to sand this anyway, to prep it for the final coat, so it's not the end of the world. I will move the boat out into the main parking area for the next coat, away from the vegetation and probably the fly-resting-area in the weeds at the back of the boat. There are two "sags", which considering as I'm an amateur who is clueless about what he is doing, is not bad. I'll sand them out. Hey mods.... Can we close or lock this thread?  Thanks!

Game-changer.  Bolt-together boat stands.  Sounds crazy but that gives me a mess of stand placement options I didn't have before, and means that I can pretty surely get the trailer out from under the boat to paint the bottom.

Having burned some bridges, at least for now, at the yard I was going to be hauled out at this week, I need to figure out options. I've got inquiries about haulout prices at a couple of local yards.  The boat will arrive at the yard on it's trailer. I need the boat removed from the trailer and then either yard or DIY-me needs to remove a couple more square feet of bottom paint which was probably applied sometimes during the Roman Empire. Then I'd like to roll on a barrier coat and then a coat of bottom paint, but don't have to go crazy with either of them because I plan to dry-sail the boat as soon as a slot becomes available at the TI yard.  That might be a few months, so  I might be wet-sailing the boat during the interim, thus the barrier/paint.

I'd happily pay the required costs at yard #1, because of personal relationships there, but going elsewhere....I have to admit that it hurts to pay 4x what I paid for the boat, in the cost of a bottom job. So I am, somewhat reluctantly looking into using jackstands to get the boat off the trailer, and doing it all myself.  Those assemble-in-place jackstands make it possible. I took measurements yesterday and I can safely get the boat off the trailer as long as the stands go up to about 54-55 inches.

The trailers wood bits desperately need replacing.and a couple of places need a good grinding-ospho-paint.  That will take me a few days so DIY makes pretty good sense.  I'm just starting to get a bit tired of the work.

I saw the harbormaster at the dry storage/marina where I've got the boat and asked him about bottom painting. NYET.

There's a small super-funky boatyard across the slough, so while I waited for paint to dry I drove over there to just see. Inside the creaky, disastrous-looking building sit two EFFING GORGEOUS mahogany runabouts. Out back, a 34 wood Carver sedan is getting new planking.  Hmmmm... despite the incredible mess, this place has potential, I thought. And in fact, he's willing to do the job, and the cost is only $600 more than buying the bluidy boat stands. Honestly, it's close to break-even for me.  When I add up all the materials and $1200 for the stands, it's about what he'll be charging me.  That was an easy decision. So I'll take her over there at the end of the month. Diablo Boatworks on Bethel Island.  If you drive over there, brace yourself!  But the owner is a good guy and he was recommended by the Sunset Harbor harbormaster.  I wouldn't take my TP52 there, but for this?  Sure.

I gave up waiting on a rigger to get back to me about making a 4mm wire backtay with swaged ends so I followed  "Animated Knots" videos on YouTube and made brummel-spliced eye loops on the ends of a long piece of 1/4 inch dyneema that I already had. The fid I ordered is actually too small for the dyneema I had so I hand-sewed the tail to the rest of the dyneema instead of burying it.   This is apparently what arborists do, they use sewn eyes.  There are a bluidy lot of hand-stitches with sailmakers thread holding that tail in place.   The two locked loops that make the Brummel  are according to  instructions, though. They're made around some s.s. eyes, which I already had, so now I have a very strong backstay for the cost of the fid and  a few minutes following an online video. Nice.

I must be making progress 'cause the registration numbers went on, today.  The bootstripe got painted and the side-mount "custom" outboard motor  bracket and mounting plate went on. There's some touch-up painting to do around the deck hardware. At some point I'll re-pressure wash the deck and clean it up. I'll apply some nonskid and re-paint.  That project is a bit down the line right now, though.

Shiny, but nowhere near perfect.