Just curious if there are any competitive home-built plywood A-Cats out there. Building a couple of hulls over the winter would make for a good project if it were worth it.

Ask over at Cat Sailor, they have a number of DIY guys.

I've looked there, didn't see much

From what I have read and chatting with to A cat veterans is the wooden home built boats were not as stiff and they surely not as light as the all carbon exotic models.

There's the Unicorn Unicorn Homepage an old design but a good one! 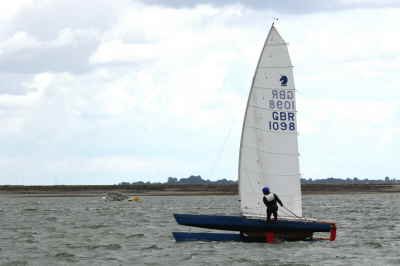 What's your goal, storming through a competitive A-Class field in your self built boat? Then the unicorn isn't your tool, perhaps you could take a look at the LR2 or LR3 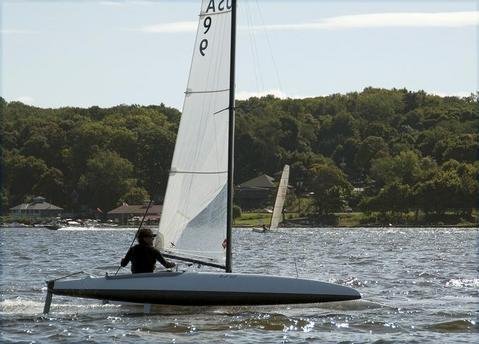 Wouldn't expect to storm through the fleet, but it would be nice to keep up. The L2 &amp; L3 projects are very cool, but a bit more than I'd like to bite off

how about a paper tiger - 14ft - all of them are ply as far as I know but with a few fancy bits to make them exciting (like Boyer rudders).

knobblyoldjimbo said:
how about a paper tiger - 14ft - all of them are ply as far as I know but with a few fancy bits to make them exciting (like Boyer rudders).
Click to expand...

Not all Paper Tigers are ply. My father bought one around 30 years ago and it was a foam sandwich construction.

Good fun boats though if you don't like trapezing!

Locally built varnished ply A sailing out of Darwin.

Check out "Struth" in results at http://www.dwnsail.com.au/site/yachting/da...ds/d89ps1r3.HTM

Don't think timber will ever be competive in this class again. Carbon just to light and stiff.

Do you want to go with an A only or would a Taipan do as you can then sail one up or with a crew. There are ply Taipans still around that are very competitive.

for info go to AHPC

Plywood A-cat will not be competitive, there are 30 years of development in this class.

Plywood F-16 boat will be as fast or faster than fiberglass ones.

You can search for Taipans or Blade F-16. Blade is modern design and fast... Also it has gennaker, and can be raced 1-up and 2-up...

When I came up with the foam strip plank build method for the LR2 and LR3 it was derived from a cedar strip A CAT I did 20 years ago. Glassed that one with 4 oz. inside and out. Heavier than it had to because cedar is 5 times the weight of the foam. Process makes of a fun home build method and is much more accurate than the stitch and glue plywood.

LCD said:
When I came up with the foam strip plank build method for the LR2 and LR3 it was derived from a cedar strip A CAT I did 20 years ago. Glassed that one with 4 oz. inside and out. Heavier than it had to because cedar is 5 times the weight of the foam. Process makes of a fun home build method and is much more accurate than the stitch and glue plywood.
Click to expand...

Do have any technical links for foam strips?

For my two cents:

So while it is technically possible, I don't see it as an attractive project.

I have documented my build method at: http://groups.yahoo.com/group/LR2ACATS/

I agree with Steve on the wood A. Some years ago I vacuum bagged an outer skin of .8 mm ply, 1/2" honeycomb, and .4 mm ply inner skin together for 30 lb. 18 square hulls. Carbon/foam is far superior.

Steve Clark said:
For my two cents:Yes it is possible to build a wood A cat that would be competive with a carbon composite boat, but it will be very labor intensive and require a whole lot of craftsmanship and will most likely be more fragile than the carbon composite boat.

So while it is technically possible, I don't see it as an attractive project.
Click to expand...

For us hopeless nutcases who actually like working with wood, would you share your ideas? Is it different from LDCs process?

Not going to do an A cat but I enjoy learning new ways of doing things. Wood is among my favourite materials.

I was talking to a guy who claims he could build a plywood A for cheap, it would be competitive, and he would just toss it at the end of the season and knock out a new one over the winter. It would have to be flat bottomed, hard chine.

I doubt his claim (particularly since there was NO proof), but sometimes wonder if we aren't getting too high tech. What happened to "keep it simple"?

1/8" bulkheads with suitable lightening holes were set up on 12' centers. 1/8x 11/16 spruce stringers were let into these at various spacings depending on the curvature of the hull at that point and the loading. This was very labor intensive in the days of bandsaws and traditional lofting. With laser cutters and CAD it can be done much quicker,,,,

The hull was skinned with bands of 1/8" and 1/16' plywood. The plywood was cut 90degrees to the face grain ( the bendy way) and the boat was planked with "belly bands." hat is to say that all the glue joints ran from the keel to the sheer at 90 degrees to centerline. The fore and aft edges of the planks had bevels cut into the forward and aft edges such that there was a scarf joint. The width of the planks was driven buy the amount of compound curvature in the hull at any particular section.

Some details get lost in the mists of time, but I believe the bottom was actually planked with 1/16" ply and then covered with a ply of carbon cloth.

Imagine scaling up a balsa model airplane and you just about have it.

The leading edge "D' sections of all of the Patient Lady wings was built the same way.

Wild Turkey and all of Brad Johansson's 18^2 were built the same way. Beautiful and expensive.

These boats were stiff and relatively long lived. PLV hulls weighed about 100 pounds with a surface area of almost 120 ft^2. New hulls will finish at about 70pounds, but they have significantly ( like 25%) less surface area.

Which brings me back to an old point, short of cored carbon, careful wood is the next best choice for making light stiff stuff. BUT it will take longer to do than carbon and will demand very good skill. Terry Richards and Skip Banks, who built PLIV and PLV have some of the smartest hands I have ever seen.

Thank you Steve. Perhaps one beautiful day.. Dont forget to clear room in your organizer to write the sequel to "Gougeon brothers on boat construction"!

Wood is a nice material to work with and it is available almost everywhere. But it does take a lot of time and high quality wood is expensive. Still, everything from F16s to large cats are to this day built in wood and that is a good thing.