While doing searches, I came across this forum and found my Dad's name (Bill Homewood) in here and a question regarding the whereabouts of my Dad's old trimaran, "The Third Turtle". A VAL 31, Dick Newick design. I responded to that old thread but didn't see it pop up probably because I'm new here? 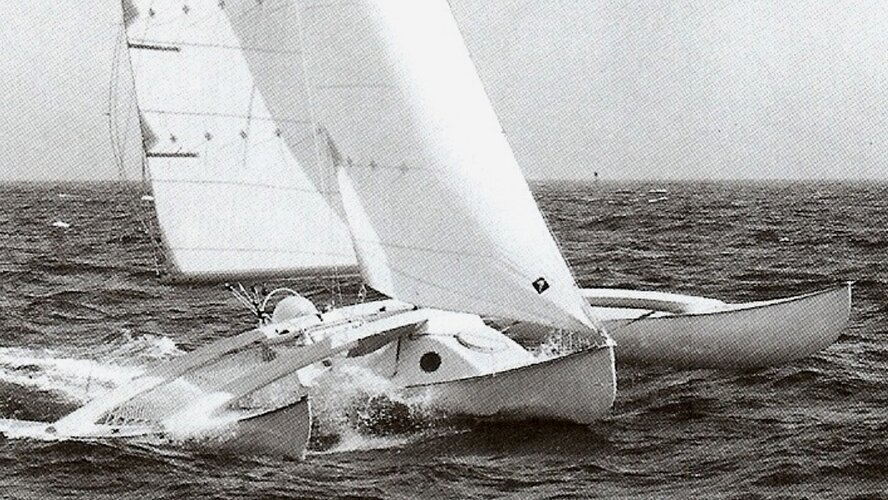 This Photograph is Bill Homewood on the South River, Chesapeake Bay Maryland. I believe this was actually his return from Newport Rhode Island, he just completed the 1984 OSTAR. (Observer Singlehanded Transatlantic Race). This was his second OSTAR and his 4th singlehanded transatlantic crossing in "The Third Turtle" 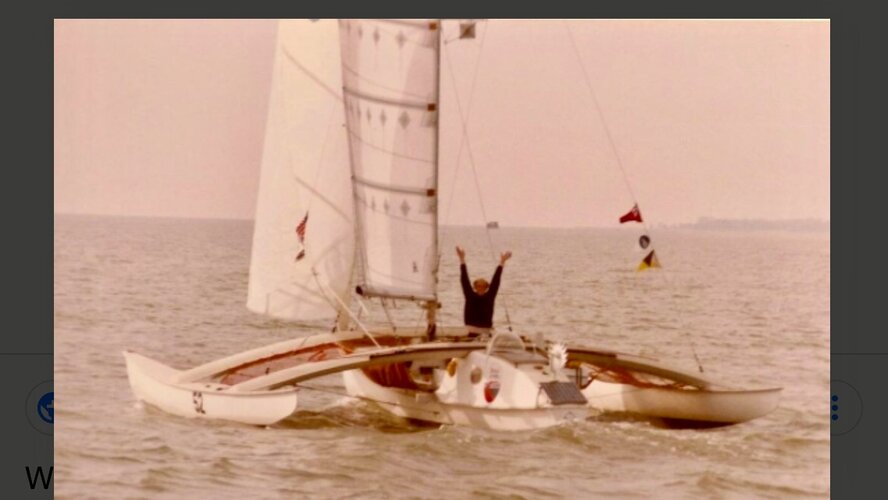 My Dad was a hardcore racer, obsessed, focused and he competed in many races offshore as well as throughout the Chesapeake Bay. He was very well known around the Annapolis racing circuit and the one to beat. I grew up as crew on many of these races as a young teenager only 13. He was always concerned about weight, keeping the boat as lightweight as possible so I was perfect as crew. He didn't believe in a large crew, 2 at the very most, no more then 150lbs each. He was aggressive too, near collisions at times and pushing the Turtle to its very limits exceeding 22 knots! Keep in mind, this was back in the 1980's just as multihulls really started getting attention. (The Third Turtle finished 3rd in the 76 OSTAR, Mike Birch had her then). On the Chesapeake Bay, we would start last and, in most cases, finish first. He loved overtaking the slower monohulls sometimes buzzy them close, sneaking up behind, stealing their air and make a fast pass around them. That little trimaran was fast as hell, quick acceleration after a tack and on we go! When Phil Weld donated Moxie the 52'? 1980 OSTAR winner Dick Newick trimaran to the Naval Academy, we had some real competition then!! Through the years though my Dad getting older rarely took her out. He had satisfied his thirst for sailing competition and when I asked him why he wasn't racing he said, "I got Bored". Wow, never would've thought I'd hear that. My entire life we spent nearly every weekend on the boats he raced, Cal 20, Ranger 26' and The Turtle. He kept Third Turtle on a railway in front of our house, out of the water. A railway system he built to keep the bottom clean. He sold The Third Turtle in the very early 90's for $15,000 to a sailor who wanted to ocean race and do the OSTAR. She was still quite competitive, but technology was moving so fast back then doubtful she would be in the top five of any big international race. He told the buyer to replace all the rigging, that she needed a refit before any ocean sailing. At some point later, just a few years, we heard she broke apart doing a transatlantic crossing or something like that. It's a bit hazy, it was many years ago. My Dad was devastated, heartbroken and questioned whether or not the boat had been rigged properly? Refitted? It was like he lost an old friend.. 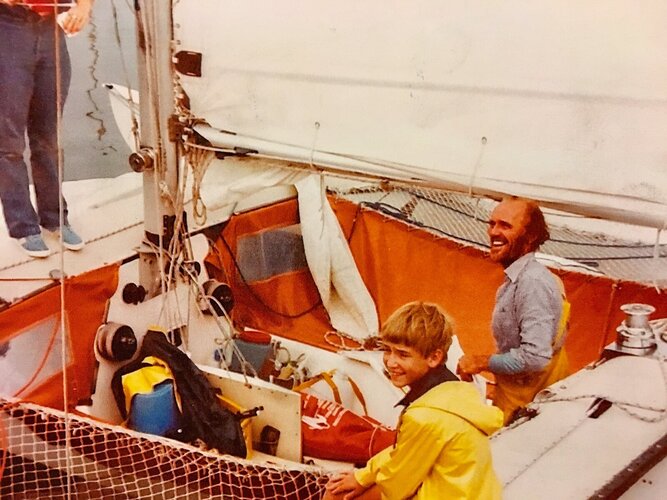 That's me in the yellow, lightweight crew. lol.. He let me take her out with some friends when I was just 16! I'll never forget that day, scared the crap out of me. It was blowing good, we saw 22 knots! and after double reefing the main slowed her down to 15 knots. Great memories. *I asked my Dad some point after what the top
speed he achieved and he said around 22 knots. He went on to say anything she would probably her to break up!! 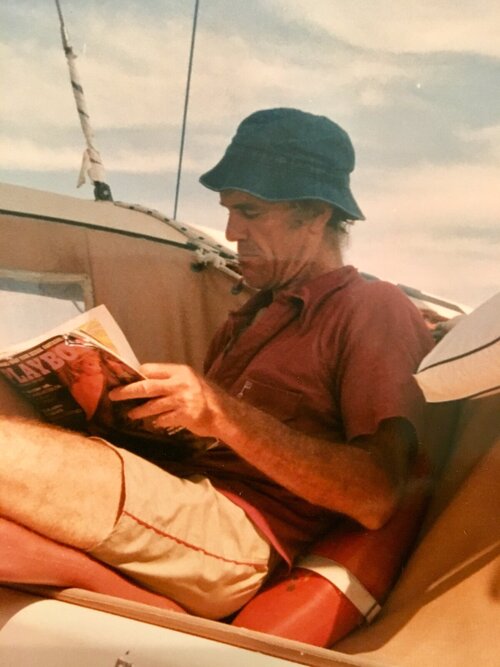 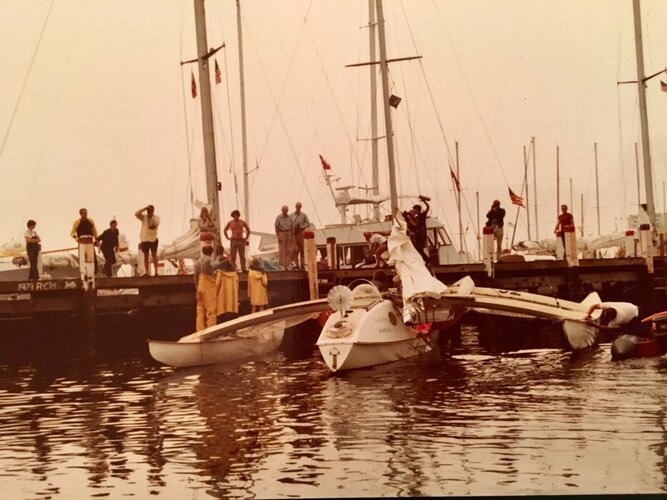 After the 1980 OSTAR he was asked to speak at many Yacht Clubs around the Country. He had a Copy of "The American Challenge" It was a documentary film that Phil Weld sponsored, he basically paid a very large sum to have cameras mounted on 5 OSTAR boats to make a film. The Third Turtle was one of the boats in the film. I highly recommend you watch this film! It's very informative and very entertaining!!

This month is the 12th anniversary of my father's death, I miss him. He was loved by many and he was really cool. Those OSTAR singlehanded sailors were trail blazers doing that race alone and without the technology of today... Wow. 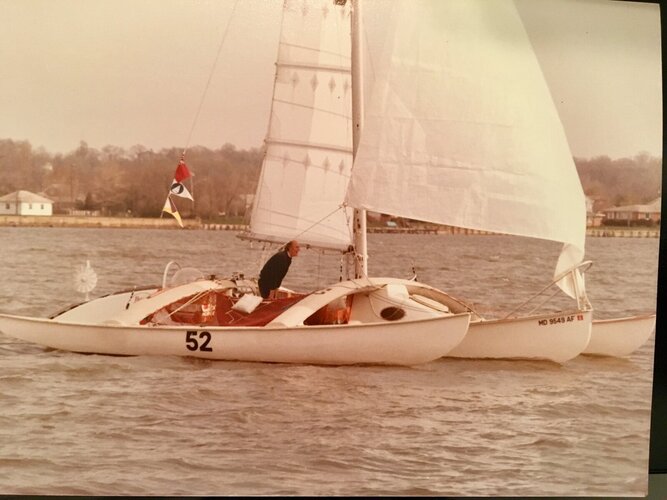 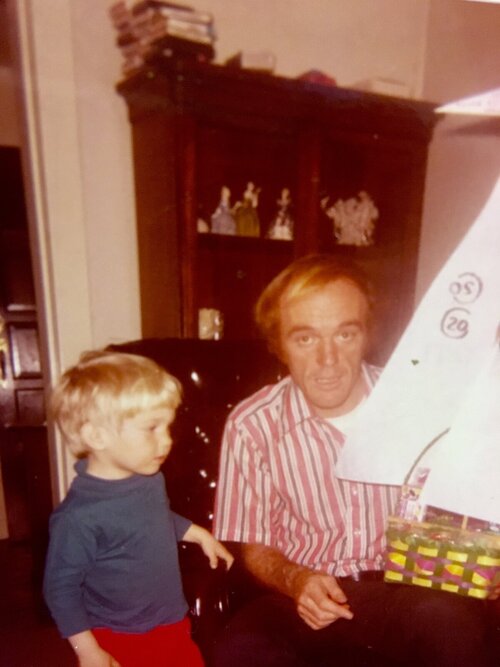 I knew your Dad and raced against him many times in the NEMA races and I think in the Tashmoo Dash race which was a big Newick event. Thanks for your stories.

This was one of the Newick tris I was racing at the time. Nice write up and tribute to your father. Thanks for sharing the memories and pictures.
B

Thanks for the history, Michael and the reminder of how much fun offshore racing was in smaller, owner campaigned, multihulls.
We raced against your dad in the 1987 GOR during which my dad (who was probably as crazy as your dad) celebrated his 70th (May 20th) and we corrected first. That year was by far the best attended GOR ever with the wing decked Val, Heart, three Condor 40s, Sebago - Walter Greene's 50' cat, Godbey Systems - formula 40' tri, a Magreggor 36 (fastest on the first leg up the Bay) and five? Gemini's. With guy's like your dad in the fleet the CCMA was more adventurous so we ALL miss him!
B

This one lies unloved in Manjack Cay.
B So where exactly is this reality check project?
B

Back in the mangroves on Manjack Cay, Abaco.
Don't know if it's for sale, do know she has burned out a few prospects efforts already,
Deja vue for me and my Kelsall, a better project also going to waste.

boardhead said:
Thanks for the history, Michael and the reminder of how much fun offshore racing was in smaller, owner campaigned, multihulls.
We raced against your dad in the 1987 GOR during which my dad (who was probably as crazy as your dad) celebrated his 70th (May 20th) and we corrected first. That year was by far the best attended GOR ever with the wing decked Val, Heart, three Condor 40s, Sebago - Walter Greene's 50' cat, Godbey Systems - formula 40' tri, a Magreggor 36 (fastest on the first leg up the Bay) and five? Gemini's. With guy's like your dad in the fleet the CCMA was more adventurous so we ALL miss him!
Click to expand...

I remember the GOR, (1987) I graduated high school and went right into the Coast Guard 2 weeks later.. I didn’t do offshore racing with him only racing on the Chesapeake Bay. Third Turtle was fast but not as fast as the others you mentioned with the exception of the Gemini’s.. I remember him saying he’d love to have a Condor 40 but he didn’t have the money for a new 40’ trimaran. He really admired them and if he were to do a 3rd OSTAR he would want a bigger boat.
Thanks for sharing nice to know people remember him!

That old VAL 31 is worth saving, it’s solid fiberglass no wood, no rot. It would take a fortune though!!
I remember my Dad saying when he was crossing the Atlantic he could see the hull flex! *If you’re down inside the aft cabin on the deck you look forward all the way to the bow and he could see hull sides flex. As a kid I would crawl through the center hull forward from the stern cabin to the forward cabin (sail storage). The forward cabin was only accessible through the oval hatch on the foredeck.. It was fun crawling through that tunnel around the dagger board sleeve lol..
You must log in or register to reply here.
Share:
Facebook Twitter Reddit Pinterest Tumblr WhatsApp Email Share Link