So, just got myself into a 1980 EDEL 820, obviously the boat has been dicked around with for 40 years, but the main issues are mainsail tackle related.

The images below show what the previous owner was doing and what I've done about it so far.

The traveller was absurdly mounted to the pushpit as below, it had I think 5 small screws/bolts through the Bimini hardware as seen, and 1/2" line securing the traveller (on the starboard side, on the port side I circled where the line was just around the tip of it when purchased) to the bar and pushpit.

Prev owner swore up and down it withstood a 50kt blow and near knockdown but I was out in 5kt on our first sail, moved the traveler windward, and the windward-most bolt lost its head, the line slipped off the tip,and would have probably snapped in half had the mainsheet not come out of the cleat in the chaos.

Also, it is ugly and in the way (as if dangerous wasn't bad enough).

I've now as a stopgap measure installed a very hefty folding padeye behind the rear hatch and shackled the sheet to that. In order to reduce the block banging around I'm probably going to replace the stand up spring with something with a flared base, and relative to what is seen in the photo will be inverting the cleat so it properly uncleats.

I bolted a pretty hefty pile of marine ply, 1/8 and 1/16" steel to the underside of the deck so I'm not worried about pullthrough. I'm more worried about the deck separating from the hull, frankly.

The long term fix planned is to reinstall the traveller to span the hatch on a solid wood mount, but my hope is that she sails kind of okay (will be using a lot of vang to shape the sail in the short term I expect) with the current setup. Obviously a traveller this far back has to be huge to do a ton to help with sail shape anyway.

Anything I haven't considered? (I'm sure there are many things - what stands out?)

Looking from the photos, the traveller / mainsheet is a long way aft compared to where it attaches to the boom, not sure if you can do much ab0ut that as it looks like it would be sat above your steering position.

Yeah originally it sat just behind the main companionway entrance, but there is now a custom hard dodger there.

Without doing something crazy like twin mainsheets off the sides the furthest forward it can really be is about where it was mounted on the Bimini just where the aft hatch slides to.

Side mounted twin sheets is kind of appealing and would give the sailshaping functionality of a traveler,  so is a consideration.  Will be meeting a rigger to talk about options Wednesday so... professional opinions forthcoming

What is that wheel fore &amp; aft on the starboard coaming?

Confirmed. It's a lot better than just trying to steer with the rudder but I wish the wheel could be quickly removed and stowed!

I seriously doubt that farkakta traveller could survive 20 knots  let alone 50. Please have a pro rigger look and advise.

Land of the locks

This is a bit tricky since the loads will be up and forward, essentially prying the traveler fasteners out of the deck. Fico used to make a traveler system that was meant to take a load off center, my old Tartan had one with an aft cockpit track similar to your situation, but they are long out of business. A modern system will need to be mounted so the track is perpendicular to the mainsheet load or the traveler car will bind and bearings will go bad quick. This means the mounts and backing plate will have to be wedge shaped. Moving the traveler as far forward as you can will help.

Is the boat strong enough at the gunnels to use risers? They would have to be pretty beefy to take the load but could be made to accommadate an angled track. This would keep the hardware out of the aft cabin, and might allow the traveler to be mounted a bit more forward. Garhauer has them, and also does custom work. 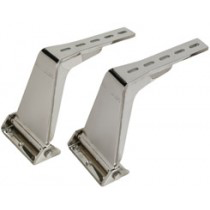 I don't know much about travelers, but I'm pretty sure the outboard steering wheel should be replaced with something like this.

nichol said:
Yeah originally it sat just behind the main companionway entrance, but there is now a custom hard dodger there.
Click to expand...

I like your idea of spanning the hatch on wooden blocks. it's been done before, it'll take the loads. But could you mount the traveler to the dodger? maybe not a great idea.

Not the dodger as it is currently. It's just a hard dodger. A good running body check could probably dislodge it and the mainsail could pull it right off, no doubt.

a good running hip check could also dislodge that stern rail rig as well... I'd want a traveler fastened directly to one of the surfaces on the boat even if it's thru a beefy bracket or two. not some piece of railing.

can ya get us a couple more pics of the entire cockpit layout? where does the boom end in relation to that? does that arrangement really give you any downpull at all or is reaching forward a lot to get to the boom?

I think you're going to be better off returning to the original layout in some fashion.

It looks like the 820 had main sheeting  at the forward companionway hatch.  I’ll bet a buck the previous owner unbolted the traveler from the cockpit and cobbled up the Rube Goldberg contraption you now have 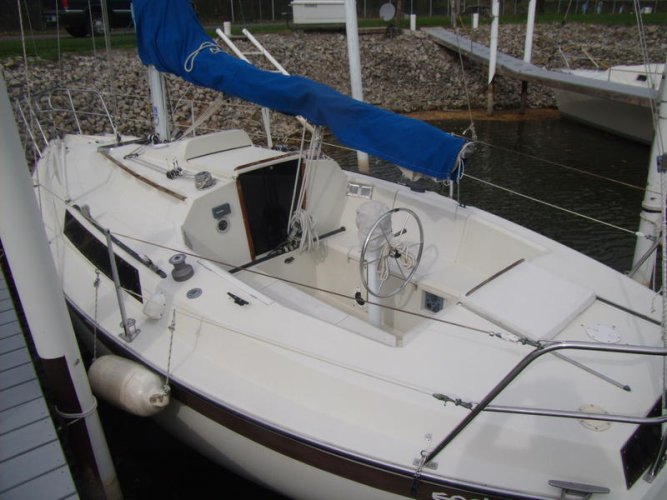 For clarity, the contraption is gone and the sheet is now mounted on the single padeye in the third image above. I agree the contraption was a hazard and it has been removed. The padeye is well secured to the deck.

Twin mainsheets and a good vang?

That's so far back a traveler doesn't make sense. Maybe spanning the cockpit in front of the pedestal - yaknow, a shin bruiser.

I do think before I add a second sheet I will investigate improving my vang game.

With two sheets would you even use your vang?  I would think absolute boom position could be determined very precisely with twin mainsheets...

Like @Bump-n-Grind said, I’d look at moving it back to in front of the companionway. This has a bunch of loading advantages due to the lessened angle as well as moving the attachment point on the boom forward thereby giving you more travel out of your traveler. While it seems like a PITA place to have a traveler, in practice I’ve found that when motoring or at dock/anchor the traveler just gets set all the way outboard and you simply step through. The bolts will be in an out of the way place that is still easily accessible for maintenance. Hell, you may even be able to mount them by yourself if you have long arms to hold the screws up top while ratcheting down below.

I would leave it as is and just get a very powerful solid vang.  You can do everything you want to do with a traveller with a vang and a mainsheet.  A lot of force will be placed on the base of the mast, though, so make sure you overdesign the way the vang attaches.

nichol said:
I do think before I add a second sheet I will investigate improving my vang game.

With two sheets would you even use your vang?  I would think absolute boom position could be determined very precisely with twin mainsheets...

If you look at the photo markjsmith posted above you can see that the lazarette location limits shinbruiser placement substantially
Click to expand...

The twin mainsheets only work as vangs as long as the boom is in between them. Once you crack off, there is nothing keeping the boom down.