In the meantime....are the winged keels found on production sailboats always cast iron? Seems to me it would be tough to pour lead into that kind of shape.

kinardly said:
In the meantime....are the winged keels found on production sailboats always cast iron? Seems to me it would be tough to pour lead into that kind of shape.
Click to expand...

All 100% Lead.  Poured just fine stayed on the hull through the worst of storm blown accidents.

Yep, the keel needs a good coat of paint and will get it as we work through all the projects to get her back in the water. 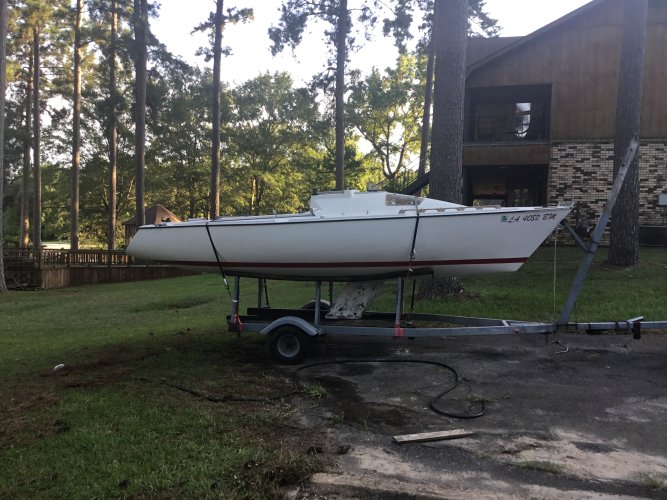 DDW said:
This is why I use Lift instead of lift and Drag instead of drag. In lay terms they might mean anything. In fluid dynamics they mean a very specific thing. Regardless of intent or requirements.
Click to expand...

"Lift is drag" may be disturbing, and "Lift develops from a phenomenon initially causing only drag" is more accurate (and way long), however -

The reason drag is taken as primary, when initially examining or re-examining a flow phenomenon, is that lift takes time to initiate and develop: when a body begins to move, some drag is immediate, there is no lift.

Everyone who sails or flies has experienced this delay.

For wing-like bodies like keels, rudders, sails,  (putting it in the most common physical terms I can think of) starting from rest, flow must reach the trailing edge before the flow divided at the leading edge, that part that didn't need to go around the tip, arriving first, flows around the tip to join the other divided flow. (If it didn't some air or water would be missing). Then that join itself moves aft to the trailing edge developing a powerful rotation, like a gear, which eventually leads to lift.  But there is not an instant in the progression of this flow pattern that corresponds to "lift", it is a continuous development.

(The delay and the continuous development aspects don't depend on whether Circulation underlies lift.)

For other sorts of bodies, the usefulness of identifying which is lift according to the convention may never occur.

The convention definition was put forth both to simplify communication after a fluid phenomenon was investigated, and to make it easier for students to move from the lay term meaning.  It was not put forth to make sure that everyone understood precisely what lift was - the meaning of the lay term, its positive sense, remains in use in the technical and scientific environment.  Like a lot of language ambiguity its not always a bad thing.