Rio unsafe on and of the water

Virgulino Ferreira said:
Gee, I wonder by how much they beat Madrid to hosting this Olympic games...
Click to expand...

Nice to see the Brazilian grammar police being quick on draw. Setting a fine example for the real police down there
Click to expand...

chuso007 said:
Gee, I wonder by how much they beat Madrid to hosting this Olympic games...
Click to expand...

That doesn't even make any sense with the red "corrections"
Click to expand... We need to replace what we gave to the IOC chaps, so bring truck loads please.

Great Red Shark said:
I dunno, call be a chicken but I'd be on the next flight out. Who needs that shit ? I know crime happens everywhere, and if you take up a complete 'avoidance' mentality you'll need to lock yourself away from life experiences, but...this is just WAY too predictable - crime in the region has always been vigorous and highly opportunistic - the Olympic rings are just plain ringing the dinner bell.

I think the IOC has earned a rebuke and their endorsement of Rio was predicated on THEM getting paid and once they got the suitcases of Petro-bucks a couple years back they have well &amp; truly not given a damn what happens, no matter how much it damages the image of the Olympics. They've turned blind eyes for so long they don't even know how not to anymore.

Plenty of criminality to go around.
Click to expand...

I would agree, Its not just Brazil to blame. The IOC seriously screwed the pooch on this one
Click to expand...

Anyone taking notes on future Olympic Venue selections? Here's who else has fucked this one up but good:

All the national OCs

All the international sports federations

All the athletes' organizations

Have been to Rio a number of times over the last few years for a total of about 3 month and must admit that I love the city. I was last there about a year ago and it was clearly a more relaxed place to be than it was 5 years previous. It was actually pretty relaxed around Leblon and even going for a stroll in the evening was fine, provided you were sensible. I don't know whether it has worstened in the last year with the Olympic build up. Go back to 2009 and about 5 minutes on Copacabana beach without being robbed was an achievement!

All I can say is that you need to work on the basis that whatever you go out of the front door with, be prepared to lose it. So go out in the evening without your phone, camera, watch or wallet. Take the cash you expect to use that night and wear a t-shirt, jeans and flip-flops. If you need to take valuable, go in a known car/taxi. I haven't been mugged, but know a good number who have and apparently the robbers are generally pretty polite and don't wish you any harm. Much more relaxed there than Cape Town for example where they will shoot you then see what you have.

Would happily go back again anytime soon, just leave anything shiny at home.

S/V Shameless Hussy said:
...obamas first failure, flew with Oprah to Europe during height of Obama popularity and got sacked...rio got the olympics LOL..

Can't magne of summer 2016 olympics would have been in Chicago this summer...sadly though as far as Chicago vs Rio, I say Rio has less gun violance which says a lot and explains partially why it was best for Olympic committee to not have awarded Chicago with summer 2016 olympics...

Corruption in Rio doesn't surprise me though...I wouldn't go there even if there wasn't a medical health risk as there is too much a violance risk..beaches there just aren't worth it...

I'm trying to get it through your head that Obama does indeed have accomplishments.

Remember, while President Kennedy may have put a man on the moon Obama put a man in the ladies room

dealin’ dope
Rio 2016 watchers never seem to have to wait long for yet another scandal; since our last piece there have been more robberies, more assaults, and on Friday the World Anti-Doping Agency suspended the only WADA-accredited lab in Brazil for noncompliance with lab standards.

Putting aside WADA’s own disgusting treatment of the Russian doping issue (which included them literally turning in a whistleblower to the Russian authorities before dragging their feet for years on a problem they knew about), the latest kerfuffle likely means big delays in testing the thousands of athletes already in Brazil for the duration, and hundreds of thousands in unplanned costs to fly the samples overseas for testing.

Precisely zero people worldwide are surprised at the latest news, and we’re all just wondering what the hell is next. Man-eating sharks on the rampage? Gang wars on the beach? Armed rebellion? Zombie apocalypse? Watch the news and you probably won’t need to wait long.

...sounds like they didn't hear about the recent armed assault on a hospital to free a drug kingpin :mellow:

Rio de Janeiro (CNN)Rio de Janeiro's largest public hospital and one of the five designated to treat tourists during the upcoming Summer Olympic Games was attacked by armed gunmen during the weekend, leaving one person dead and two injured.
The attack deals another blow to a city struggling to show it's ready to host the games.
The raid took place early Sunday morning at the Souza Aguiar hospital. According to local authorities, the group was trying to free an alleged drug kingpin known as "Fat Family," who had been taken to the hospital a week ago following a shootout with police and was under police surveillance.
According to state news agency Agencia Brasil, more than 20 men broke into the hospital carrying assault rifles and hand grenades and wearing masks to cover their faces.

Varan said:
You should try Idaho where they affirmed it is a constitutional right for citizens to carry concealed weapons without permits anywhere in the state, cities included.
Click to expand...

I live in Idaho. It is a very polite society. Very little violent crime, and those violent crimes that do occur are solved and people are convicted. Car-jacking is unheard of here. One can see pickups with racks in the back window with a hunting rifle, shotgun and a fishing pole. People here peacefully co-exist. We hunt wolves here.

On the other hand, in other states, their populace is not to be trusted with firearms. The result is a lot of sheep being preyed upon by a few wolves. The wolves will only grow bigger if they are not put down. A lot of sheep must feed large wolves. Which are you?

are you in the asshole contest?

Today at the airport along with a PBS Newshour on the shitty water: 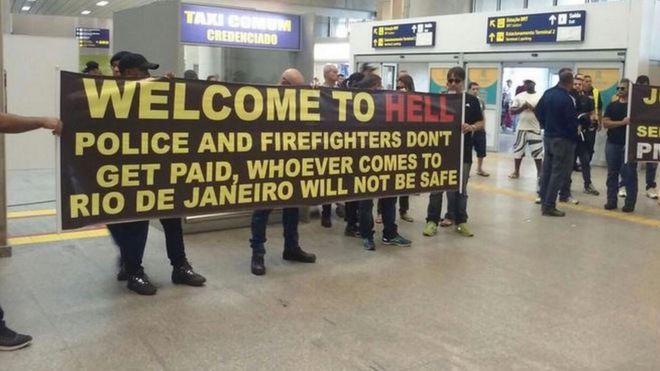 what does the other sign, only partially visible off to the right, say?

Parma said:
what does the other sign, only partially visible off to the right, say?
Click to expand...

smart money is the same thing , but in portuguese .

I think it says "toda sua base é nos pertence"

Wouldn't want to be holding BRZ government bonds, or whatever financed the infrastructure...

Wonder if the Olympic lodgings are as bad as the World Cup...or Worse.

The Olympic GERMS: Drug-resistant ‘super bacteria’ is discovered on Rio’s beaches and sailors say filthy water turns their boats BROWN and 'looking like a toilet' weeks before Games begin