Jerry Milgram just passed away.  He was with MIT and worked with Horizon Sails to develop “Tape Drive”.

Was that enough to compensate for Cascade?

Sounds like he had his hand in a lot of things... and had a pretty good run!

MILGRAM, Jerome H. Age 83, passed away December 20, 2021, at his home in Winchester, Massachusetts, with his family by his side. Jerry was the W. I. Koch Professor of Marine Technology at the Massachusetts Institute of Technology (MIT) where he taught since 1970. Jerry was a member of the National Academy of Engineers and recipient of the 2017 Gibbs Brothers Medal (awarded for outstanding contributions in the field of naval architecture and marine engineering). Jerry contributed to the development of many technologies associated with oceans: boat design, oil spill clean-up, tug and tow technology, underwater submersibles, and even holograms that detected plankton. He often worked closely with the United States Navy and the Coast Guard. Jerry was the design director and chief computer modeler for America3, which won the America's Cup in 1992 by using a more scientific approach to the design of racing yachts. Jerry was born in Melrose Park, Pennsylvania, on September 23, 1938, the oldest child of Samuel Milgram and Fannie (Marmor) Milgram. He loved sailing from an early age, and was captain of the sailing team at MIT, where he received his undergraduate degree in 1961 and his PhD in 1965. Even while teaching and doing research he loved outdoor activities including cycling, and sailing his self-designed boat, the Cascade. Jerry is survived by his wife, Robin (Horowitz) Milgram, his stepson and daughter-in law, Eben and Uromi Manage Goodale, his grandson, David Parakrama Goodale, his sister Linda (Milgram) Becker, his nephew Eric Ring and his wife Melissa Wallen, his late nephew Steven Ring and his wife Mary Ring, and their children, Andrew and Melissa. Jerry was kind, smart and witty. He was a devoted husband, and loving brother, father, uncle and grandfather, who will be deeply missed. An online Memorial Service, hosted by Eben and Eric, will occur on January 8, 2022. In lieu of flowers, the family asks that donations be made to Oceana (www.oceana.org), which is the largest international ocean conservation organization, or to MIT (giving.mit.edu).
Click to expand...

I have to say, Cascade was as ugly as Tape Drive.  Both very good ideas, just not well implemented.  Vale, Mr. Milgram. Your ideas did make sailing better!

I have to take exception to calling Tape Drive Sails ugly. When we got Tape Drives in black and clear on our racing trimaran we sort of became the 'poster boat' and had some great Billy Black photos used in the magazine articles. We won a lot of races with them and came to love them and we called those sails our 'Fredricks of Holllywood' sails because you could sort of see right through them like fine lingerie...

I also never thought that CASCADE was ugly either, just a different sort of mind set! RIP Jerry

Darn it I was thinking about him a few days back. I had the thrilling experience of sitting next to Jerome Milgram at a symposium at MIT. I was star struck. Fair winds.

I worked with him in the early '90's on a ship wake program for the Navy.  He was different/eccentric.  His perpetual tie clip was what most of us call a paper clip.  He worked on Koch's AC design team and at one point was kicked out of a meeting.  Saw him maybe a month after they won and congratulated him on their victory, he didn't want to talk about it.  I guess Bill was trying to make it up to him by endowing the chair at MIT.

I'm really pleased to have crossed paths, he was a brilliant mind and passionate about his work and the students he nurtured.

Ullman Tape Drive main in the Malacca Strait negated any possibility of anonymity ...... Thanks for the sore knees, making tape drive sails was painful

silent bob said:
I have to say, Cascade was as ugly as Tape Drive.  Both very good ideas, just not well implemented.  Vale, Mr. Milgram. Your ideas did make sailing better!
Click to expand...

Ugly or not, it won a lot of races.

ryley said:
Ugly or not, it won a lot of races.
Click to expand...

So many that the only way not to lose to Cascade was to give it a rating penalty.....because, well just because it was faster than its measurement said it should be.

If you wanted pretty and slow, there were any number of designers .

I always wondered how that oinker did against other 37 footers boat for boat.

A trick rating is one thing but actual boat speed???

The IOR really favoured big headsails and (almost) ignored mizzen sails. So it must have rated very, very low. The hull wasn't an IOR favoured shape however.

there's a portion where she is described as "maddeningly swift."

On the whole the SORC weather favored Cascade, as her crew quickly conceded. When the wind is on her beam, she flies. On a beat or a dead run, she does not. Never did she have a breeze better suited to her than in the 176-mile Miami-Nassau. She waffled off the starting line last as usual, but as her staysail flapped up and bellied with the beamish southeasterly, she leaped ahead. Within 10 minutes she had Lightnin' abeam in her own Class E and was fast catching up with Mu√±equita, which had started a full 15 minutes earlier with Class D

That night, with Jerry Milgram in polite command, Cascade cruised across the Gulf Stream toward Great Isaac Light as if on holiday. All around, the winking running lights of competitors kept her crew company. At Isaac several boats were spotted sailing illegally toward shortcuts among the rocks—boats that later went unpenalized. When Cascade had committed her own costly error in the Fort Lauderdale race a boat named Devastator had promptly turned her in. Such is sailing.
Click to expand...

no idea of the time difference used in IOR

Zonker said:
The IOR really favoured big headsails and (almost) ignored mizzen sails. So it must have rated very, very low. The hull wasn't an IOR favoured shape however.
Click to expand...

A common myth that simply was not true.  IOR actually favoured big low AR mains.  What you say about the mizzen was true however.

Anyone who has played around with the IOR RSAT calculations will quickly realize how much it favoured big mains and smaller headsails.  At least with regards to actual sail area vs rated sail area.

Milgram took it one step further and eliminated the headsail altogether.  Combine that with the low rated area of a mizzen and indeed you end up with a very low RSAT.

The hull form itself contributed little or nothing to the low rating - it was all about rated sail area.  By the time IOR had finished somewhat arbitrarily penalizing her she rated 27, or just below One Ton level rather than just below the Half Ton level she was originally rated at.

However IOR didn't really fix the no-headsail loophole at that time, because just a few years later a rather large (27 ft) Cat sloop named L'Effraie  won the '76 Mini-Ton Worlds.  Quite handily IIRC.  She had a very typical looking IOR hull form for that era - albeit larger than pretty much all Quarter Tons and much larger than any Mini-Ton which were usually 22 ft LOA or thereabouts.

Below is L'Effraie (not Cascade). 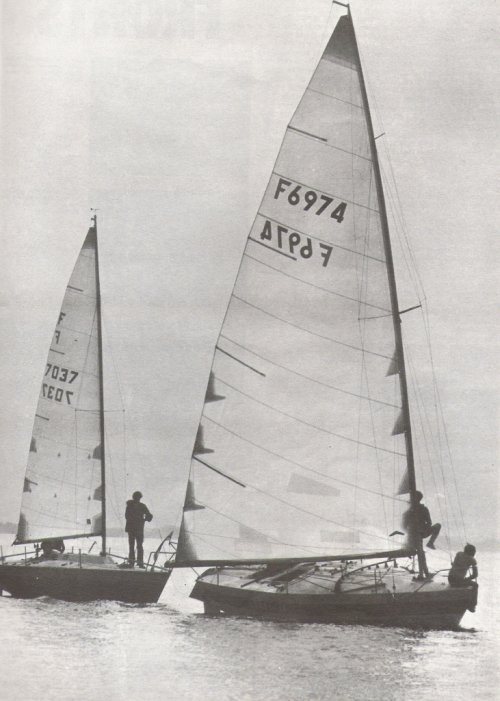 Having never had to subject myself to the IOR rule, why did type formed IOR racers tend to tall skinny mains and huge overlapping genoas (in the earlier days of IOR)?

I would guess she would have similar speed to a One Ton of that era - once the sheets were used.

They would probably do a horizon job on her upwind and be faster DDW.

But on a beam reach, I suspect Cascade may have been faster having basically two mainsails.

Big deal - I don't think I've ever been on a boat that wasn't good on a beam reach.