would love to see one in SoCal in the 'flesh' - any chance to do so?

Australian Aero's now in The Whitsundays, The Gold Coast, Brisbane, Sydney, Melbourne, Adelaide and Perth. that is a long distance apart....just Northern Territory and Tasmania to go! 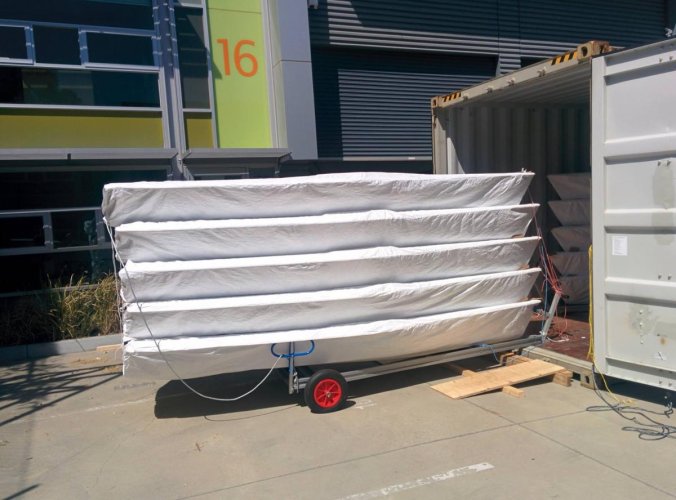 If you put a straightedge across the cockpit, and then measure the drop to the floor, how much is that (i.e. how deep is the cockpit)? Interested to know. 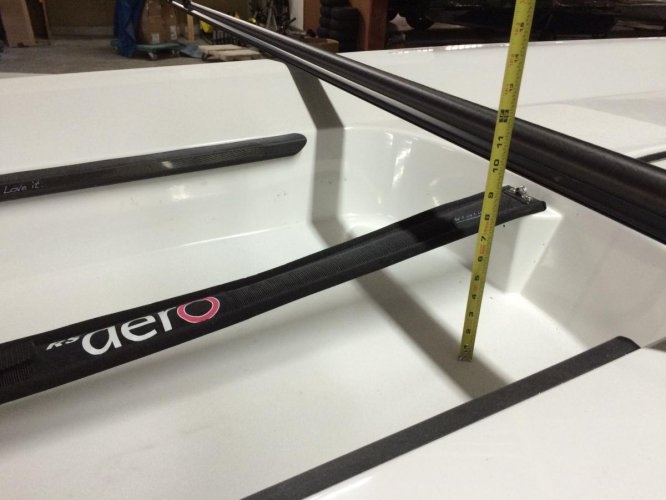 what is suggested weights for 7 and 9 meter sail for experienced sailors ?

Crossover for 7 versus 9 around 75kg I believe. Don't know the 5 to 7 crossover. Not sure I'm seeing much evidence the 9 is that much quicker.

I've found the RS site to be a bit silly with weights for the 5 / 7 / 9. I am told they are updating that to be easier to understand.

As more boats hit the water, data is coming in to fine tune that as well.

(Park City Sailing Association has a vibrant Laser fleet and learn to sail program, killer spot in the mountains)

dogwatch said:
Crossover for 7 versus 9 around 75kg I believe. Don't know the 5 to 7 crossover. Not sure I'm seeing much evidence the 9 is that much quicker.
Click to expand...

It'll probably come into its own inland in an evening series... A little extra in the can is always welcome on those nights.

WestCoast said:
I've found the RS site to be a bit silly with weights for the 5 / 7 / 9. I am told they are updating that to be easier to understand.

As more boats hit the water, data is coming in to fine tune that as well.

(Park City Sailing Association has a vibrant Laser fleet and learn to sail program, killer spot in the mountains)
Click to expand...

The first Australian Aero Class Association general meeting will be held after racing on the Saturday.

OK, a practical question - with the Aero and the standard cover, can you leave the boom (with sail still attached and rolled up) on when you put the cover on? Or do you have to drop the boom? If so, how many lines do you need to detach?

(I'm assuming you can leave the mast up - otherwise, I'll just keep my stupid laser that takes 15 minutes to put together...).

That's more than new, isn't it?

another one here too, slightly cheaper without the road base, but different end of the country:

In return for the free advertising, please could explain why you feel it's not the boat for you? It would be helpful for other potential buyers to understand everything that folks love about the Aero, as well as comments from those who didn't get on so well.

So I sailed an RS Aero 9 last night in Seattle with wind light but a few decent puffs for a range of around 5-10 knots. Todd the owner of the Aero sailed my laser around to keep an eye on me and as a useful bench mark. Todd is likely a few pounds less than I am, I am around 190 LBS/ 87Kg. I was a lot faster on all points of sail but we all expected that.

The RS Aero is very light, likely the lightest boat I have sailed yet more sail area than a Laser, Dyer 10, El Toro, Sunfish, Etc Etc Etc I have sailed a lot of boats. The rig is also more efficient. I was warned the boat was tippy but I did not think it was, just that with a such a light boat your body mass becomes a very big dynamic on the boat, it is the heaviest thing about the boat.

Right off the dock I had a bit of a bother to get flow going on the blades to sail away from the leeward dock as the foils stalled and sideways I went when I first sheeted in, but as soon as I got some speed that issue went away and I did not experience this again for the rest of the sail.

The nonskid is more aggressive than I like, it was hard to slid around on the boat and will likely wear on my gear faster than a laser does, I would use shorts over my wet suit for sure.

As noted the boat is responsive to getting your mass in the correct spot be that forward or aft as speed builds. The bow is very fine so with mass forward it sinks the knuckle in quick. Roll tacking or Jibing is easy as you weigh so much more than the boat, but the sail powers up fast when flattening so important to get the sheet out when flattening. The boat has little mass so it will stop in the turn if not driven around with good helmsman-ship. It sails by the lee fine, reversed the flow on the sail and found it stable and fast. But I also found a little up turn out of jibes really got the boat back up to speed then I would drive down. So when by the lee jibe to a reach with no change in course get to speed then turn down and go by the lee other side appeared faster than turning in the jibe. The blades need flow before before dialing up pointing but when the flow is there one can really turn up the point. The Aero also appears to have less leeway than the laser as when matching angle the laser slid to leeward of the Aero.

Controls all worked fine, I am not sure I like the tails going to a bunggy under the deck as I like to uncleat and let go of the outhaul and cunningham to let out to a stopper knot when rounding a mark, these took management from my to get let off. It was easy to adjust everything when sailing up wind however. Sail looked good most of the time when adjusted.

Acceleration was very rewarding, it shoots out of tacks or even when making a little upturn on a run there is a sudden rush as the speed builds. The boat is highly responsive to kinetics - something the rules will need to look after but it is also easy to shake the rig so important to be smooth on the helm, moving in the boat, and sheeting the sail.

Overall I really liked the boat and will likely buy one this week making 7 in Seattle by this summer.

Very nice shades of blue top and bottom with a pretty line of green in between!

​The UK Aero Website referred to above is actually the International Class Association website for the RS Aero, linked here; http://www.rsaerosailing.org/index.asp?p=news

I joked with Chris Ingram at the Dinghy Show recently that he reckoned the RS Aero 9 was a good singlehanded version of his X1 (well canvassed with a very light weight hull), an ideal weapon for light to medium winds when under powered - like all those summer evenings or sheltered locations. That was his take and I quite like it having also sailed his boat.

ChuckLinn said:
OK, a practical question - with the Aero and the standard cover, can you leave the boom (with sail still attached and rolled up) on when you put the cover on? Or do you have to drop the boom? If so, how many lines do you need to detach?

(I'm assuming you can leave the mast up - otherwise, I'll just keep my stupid laser that takes 15 minutes to put together...).
Click to expand...

Leaving the boom up has little merit as a water shed ridge as it does not reach the transom. Instead the cover has a central attachment point that the main halyard can be attached to to the raise the centre to aid drainage. However, with the cover straps pulled snuggly and the bow left raised I have never felt the need to hoist the centre like that as there is no water logging.

Detaching the boom and dropping it to the deck does not require any knots to be undone, just some slack to be pulled through in the vang and outhaul.

Likewise, with slack pulled through the vang and outhaul it is possible to drop the mast - without the need to untie any knots or unshackle the kicker!

The standard cover works with either the mast up or down (the slit is well sealed when down),

Personally I always choose to drop the carbon mast in the dinghy park as it only takes half a minute extra - the time taken to pull extra slack through the lines, drop the rig and separate the 2 sections.

After 15 minutes you should expect to be well into the 1st race!