Finally dropped my rudder this year to figure out where the play in the system is coming from. Also spotted some osmosis and figured I'll deal with both at the same time.

Now the acetal(or something like that) lower hull bearing is 25,5mm to the 25mm shaft and not something that needs to be replaced, I think?

However the bearing bolted to the skeg that the rudder rests on has significant play(see pictures). 4mm or so and was noticable even while the rudder was mounted.

Already contacted a local shipyard for help in regards to fixing that one, but would like to hear some second opinions as well so that I know what the guy is talking about when we discuss what is to be done.
I haven't figured out how to remove the lower bearing yet and wanted to ask if there is some trick to do so without essentially cutting off part of the rudder? Felt disconcerting enough to take drill and saw to the skeg to get at the bolts... 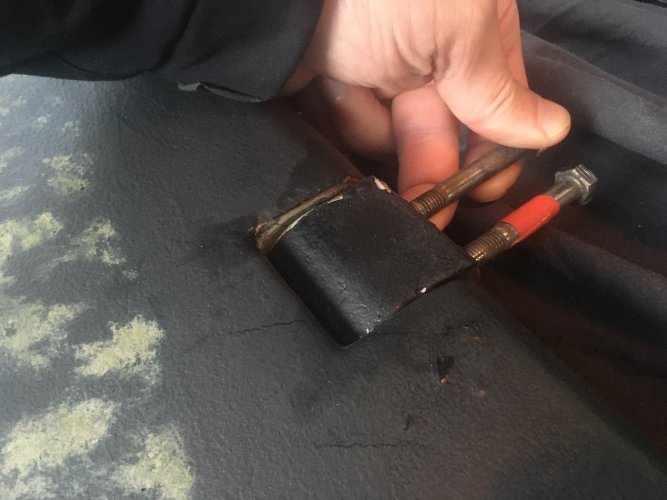 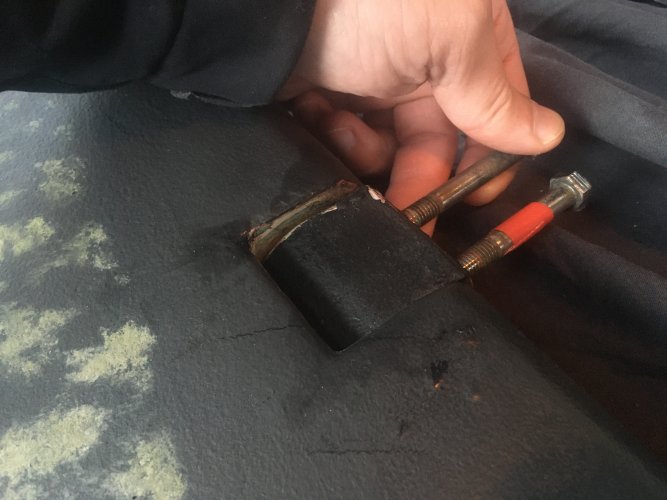 The bottom bearing typically wears into an egg shape with age

it might be fixable .. bore out and have a bushing made

this disc acts as a thrust bearing and is self aligning …

Makes sense to me(picture of wear pending), the boat is now over thirty years old and I suspect the bearing has not been replaced in its lifetime.

You agree then on sanding the rudder as well... That was the part I was concerned about the most since I knew it was standard to open the skeg, but wanted to avoid unnecessary work on the blade itself. Careful sanding it is...

Also thanks for the illustration, that is helpful.

Was spot on, the bearing is worn into a nice oval. Whereas the shaft looks pristine and measures a uniform 11,95-12mm, the bearing ranges from 13-15mm. Which feels like not a lot considering the play, but is enough.

Not sure if the pieces that fell out where the disc suppose to carry the weight as the hole goes through the entire, solid piece... Possible that there wasn't any in the first place? Regardless, the surface has been worn since it bore the weight with no particularly good contact area.
Going to bring that to the shop and see how it will be fixed/done completely new and what kind of thrust bearing he'll put in to carry the weight in the future.

Now, cutting out a piece was surprisingly difficult(need better tools), but done after an hour of struggling. Was surprised how thick the material was with a uniform 6mm.
Foam is dry as far as I can see, hole redrilled into the bottom didn't reveil any seeping either. I did notice a small amount of fluid while cutting, and only during the start of the cut. For a lack of a better term the laminate felt wet. Though that may just be that it was cold before I brought it into the boiler room to dry further.(going to see if my local yard can measure humidity of the laminate)

Now, I haven't quite completed getting rid of all the fairing compound, though the barrier coat is gone, because it was thick all over. Arms got tired towards the end as the only tool I had that proved sufficient was an angle grinder with 40 grit attachment. Worried I may have sanded in some divots here and there, or they were already present and that's why the faring compound was so thick in places.

Bottom line, my current plan is to dry out for a month before I apply new epoxy fairing compound(sands... reasonably nice. Or is there another method to the madness?), followed by multiple coats of two color(if I can find) Seajet 117 because I already have one can of it.

Now what I'd like to hear some opinions on is if I should just glue the cut out piece back in, scarf 1:12 and laminate again, or use the opportunity to close the blade as is and turn the cut out piece into one that gets bolted in? Not sure how much extra work that would actually be considering I'll be doing fiber work anyway, but also no idea if its worth it considering this has lasted forty years since the yard... Though to be fair, it had been lose for the last few years and I just didn't want to do that much work at the time...

Second thing is that the shaft is also worn at the lower hull bearing. I reckon that happened because the plastic(acetal or so?) one had to carry more load than intended due to the skeg one's play. No idea how to fix that one in any reasonable fashion though.

The rudder shaft is 25mm of solid, stainless steel and worn to relatively uniform 24,5mm around the lower hull bearing. As I have no access I wondered about getting plastic tube with inner diameter 24,5mm, slit it so that I can slip it on the affected area and then insert the rudder with the tube in place to make up the difference? Note that I can adjust the hull side bearing a little since that too has been worn(25,5 or so mm) and looks to be relatively easy to remove.

No idea how else to address the issue as of now. 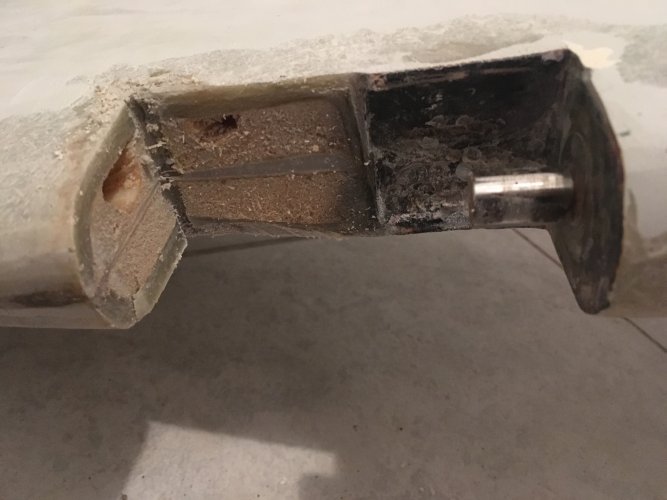 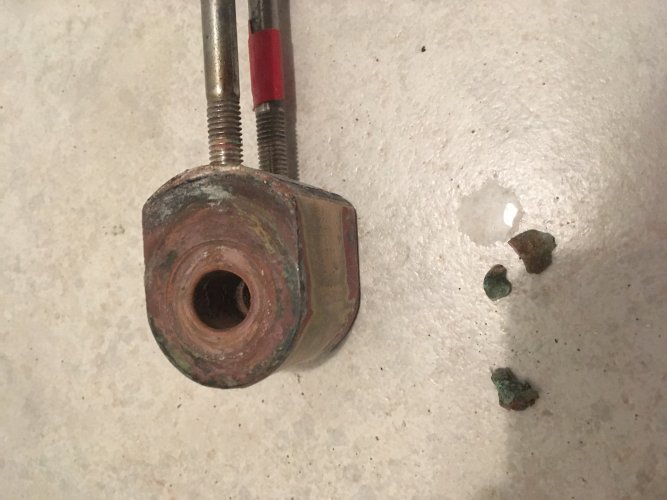 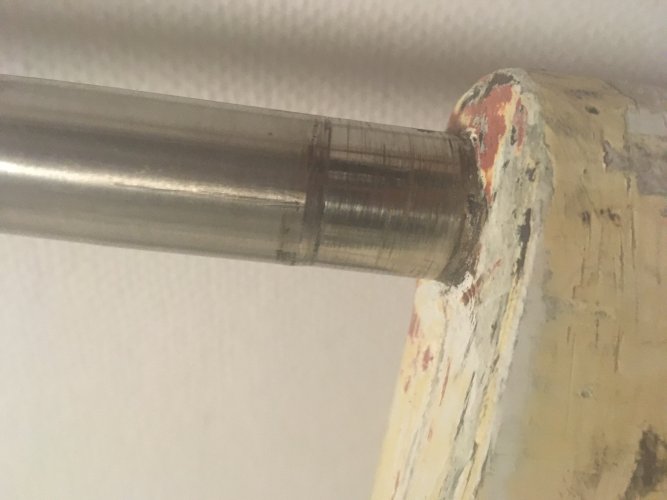 Finding a 0.5 mm acetal sleeve may be hard.  You can probably eliminate some of that play by replacing the bearing in the hull.  I did this last year using a bearing sourced from McMaster Carr.

I'm assuming here that it is a simple flanged sleeve bearing ...

Yes, basic flanged. Or may even be even without flange, I need to check when I pull it out.(and figure out the how, bearing puller and see what kind of glue had been used...)

Certainly would get rid of half the slop currently there. As you said 0.5mm is closer to thick foil, but let's see what a yard can do in addition to myself.
Mcmaster(or local equivalent for plain bearing that is sea water suitable isn't too difficult from what I have seen during preliminary research)

Almost all plastics will absorb water &amp; swell when kept underwater!! Ensure this is taken into account on the dimensions

longy said:
Almost all plastics will absorb water &amp; swell when kept underwater!! Ensure this is taken into account on the dimensions
Click to expand...

Yes.  I went with Rulon LR.

So, I am not too happy with the shop doing the work, but I have the part back. Of course part of being unhappy is that they failed to include the hard steel disk...
The drilled hole is deep enough that I can add one though. First thought is to go with a stainless steel ball(and some "washers" to get the height right).

Any obvious issues I'm not seeing?

As it happens a stainless, domed nut fits perfectly as a lower "thrust bearing."
Is it okay to use that, or am I overlooking something? Would be nice since I already have them(from other projects) and are relatively cheap in general. 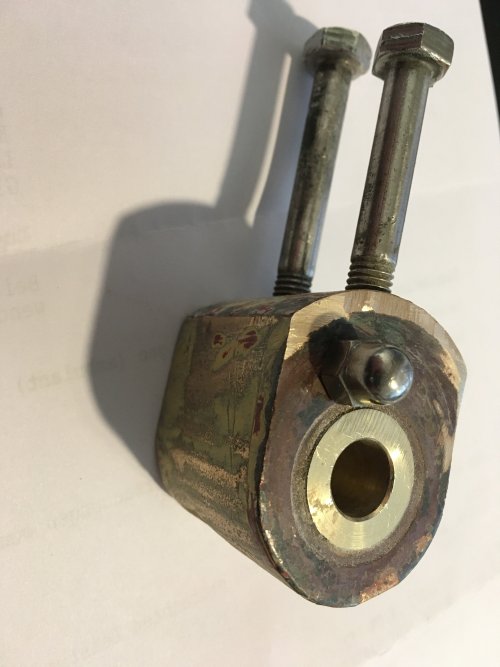