@Basiliscus, a couple of questions, given your knowledge of the AC72 wingsail.

Is it correct that the wing segments do not twist, only the flaps?

It was mentioned somewhere (?) that twist of the flaps could be up to 40° from wing bottom to top! What do they construct the "skin" of the flaps from, as they would need to be able to stretch on the A-C diagonal (below) when the flap is twisted? 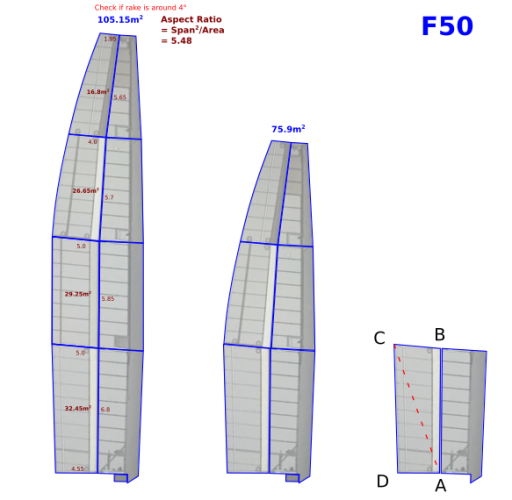 What you have pictured is the new F50 wingsail, which was designed and built by SailGP.  It is made in segments so the area and height can be tailored to the wind conditions.

With regard to the AC72, OTUSA only twisted the flap, and yes, the AC72 flap could be twisted through 40 deg.

The flaps and main element were covered with a shrink-wrap packaging film made by Clysar.

smackdaddy said:
This is one of the main things I really like about SailGP - its focus on the emerging talent in the sport, and letting those sailors truly shine at the very top...

It's what sailing has needed for a very long time.
Click to expand...

lmao, can't wait for them to be fighting for 6th place. Ya know, usually the whole "diversity and inclusion" circus gets going AFTER a series has real competition, and it's not just a one or two horse race. The crashes might be fun to watch though

Tomorrow it BEGINS...well sort the Teaser for Bermuda. 4 Episodes, SAILGP: "Racing on the Edge". The Story of SailGP. From the Announcement in October 2018 through Season 1 and new Teams for Season 2. I can't wait to watch this! Set your Times folks!

Basiliscus said:
What you have pictured is the new F50 wingsail, which was designed and built by SailGP.  It is made in segments so the area and height can be tailored to the wind conditions.

With regard to the AC72, OTUSA only twisted the flap, and yes, the AC72 flap could be twisted through 40 deg.

The flaps and main element were covered with a shrink-wrap packaging film made by Clysar.
Click to expand...

I thought you were pulling my leg... since it's April 1st! 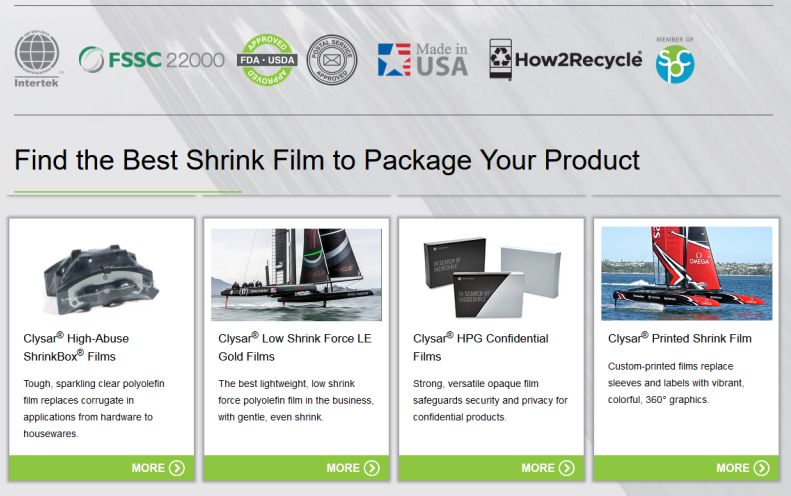 DENMARKS SAILGP TEAM first out of the Shed in Bermuda 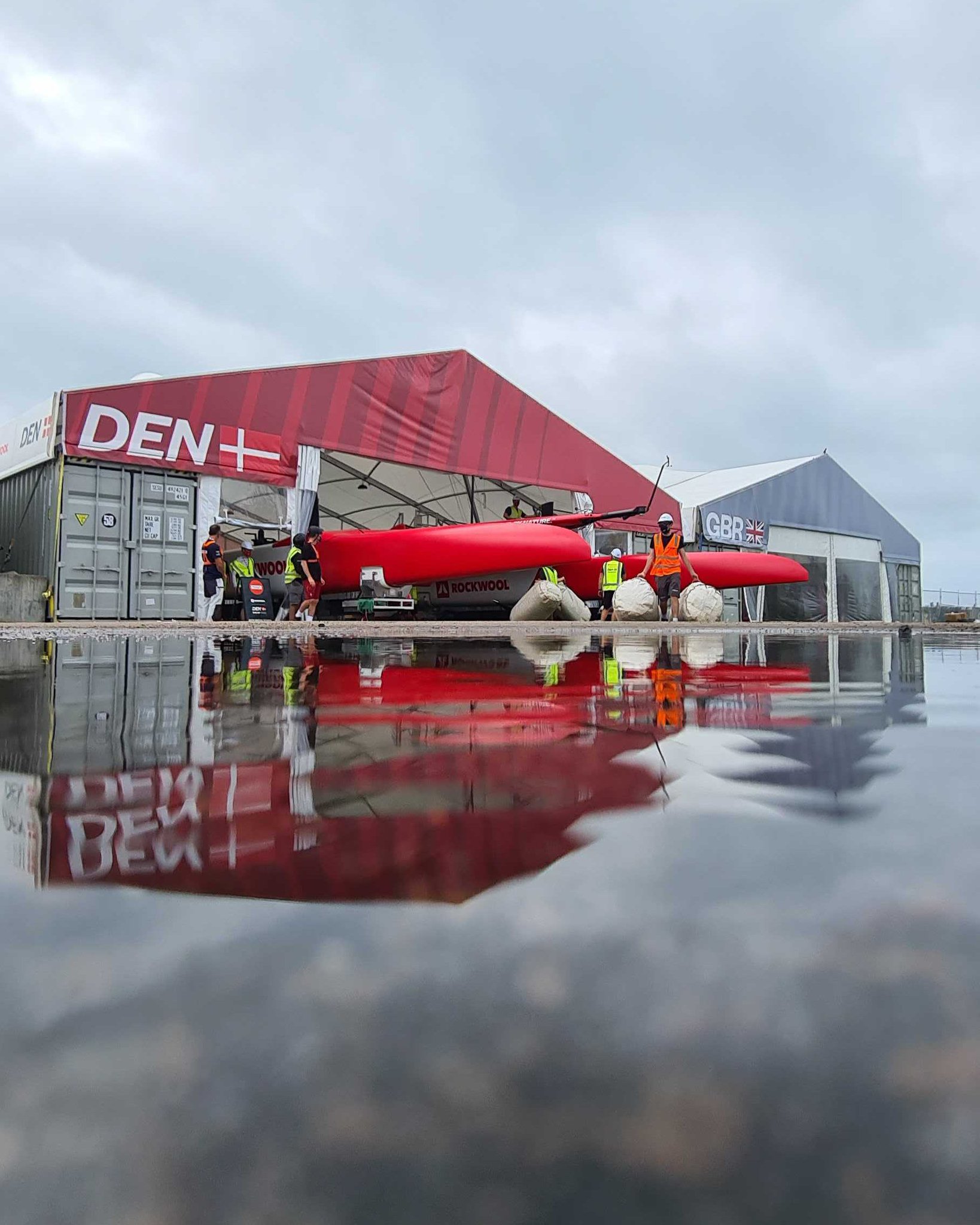 Today and tomorrow looks to be a good Day for Sailing on the Great Sound if they want to get some Training in. From Saturday onwards though there will be over 30 Knots in Bermuda so probably no Training for the Teams. 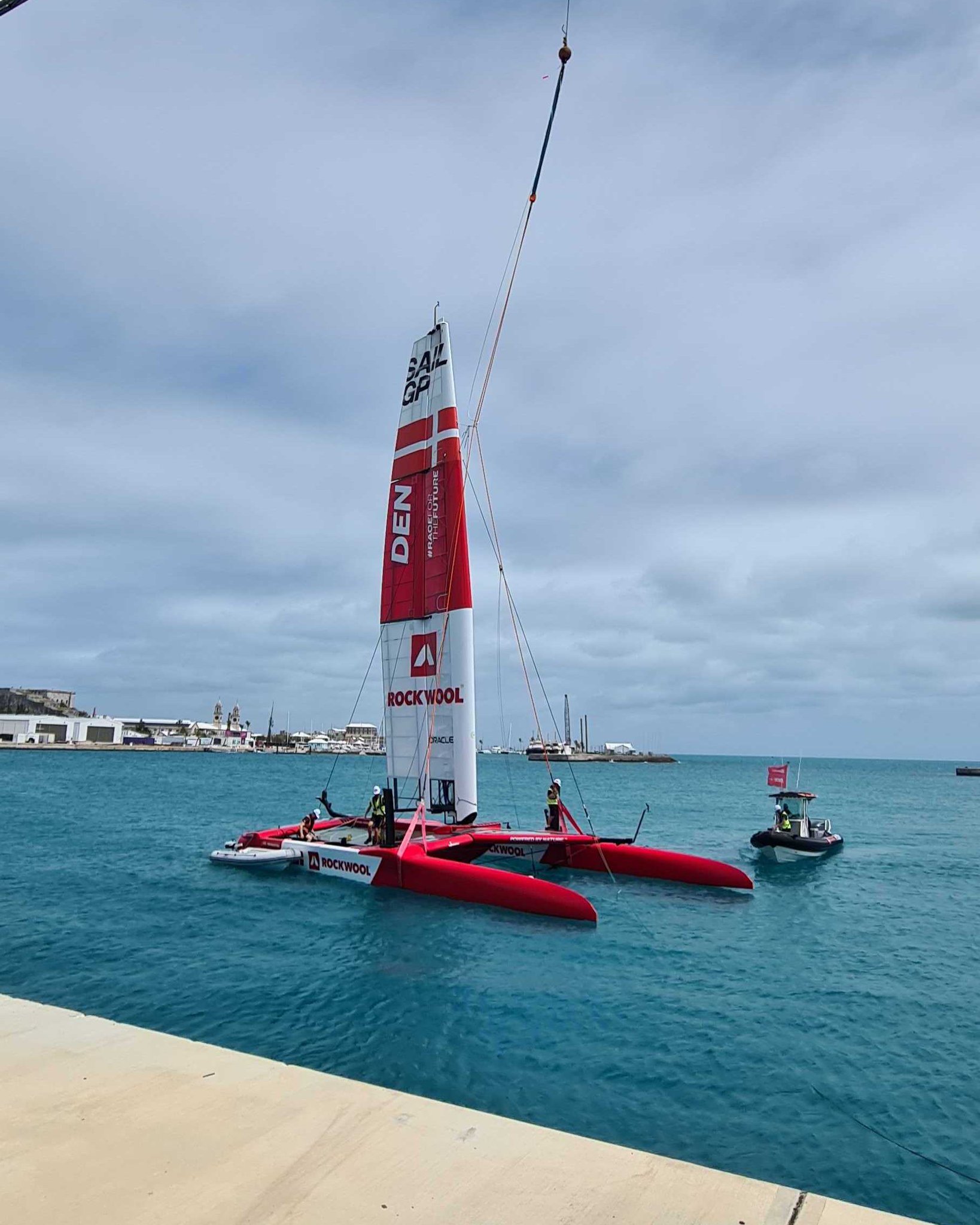 MaxHugen said:
I thought you were pulling my leg... since it's April 1st!
Click to expand...

I don't know why you'd think that - you know I have no sense of humor.

Is it me or is that the small wing?

33jesus said:
Is it me or is that the small wing?
Click to expand...

Yes it is, they leave out the 2nd section from the foot.  There's a diagram of the 2 setups, about 10 post back ^. Counting the days. Time to dust off the iPad.

From doing 2D diagrams using Inkscape  - free, and awesome IMO - I thought I'd dip my toes into CAD.  So I downloaded the free version of AutoCAD Fusion 360.  Major learning curve though!

So far I've managed to model the wing and flap segments, and can angle the flaps etc. Just for the hell of it, I set the flap at 30° at the bottom, and went as far as adding negative camber at the top to simulate twist and negative lift for strong winds: 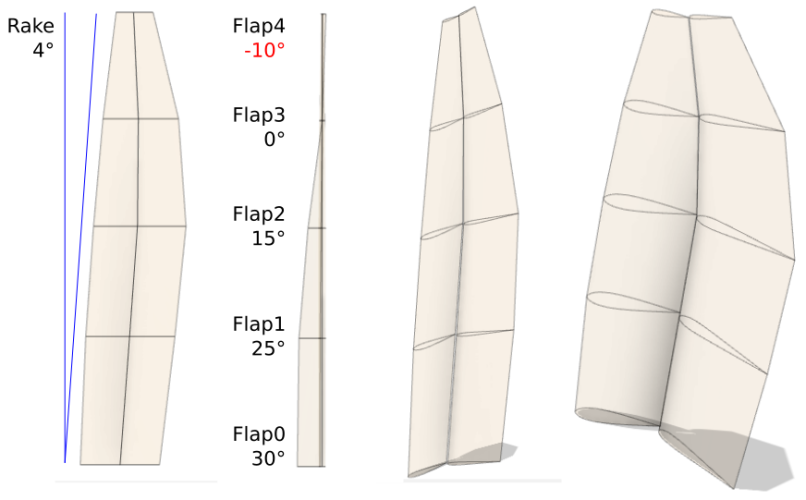 Unfortunately, I haven't been able to find any design diagrams online, so modelling the hulls etc may be a challenge.  If anyone spots these online, please post a link!

smackdaddy said:
Again, I think those descriptors are a bit on the hysterical side. I see this more as a business/political/platform move than some indictment on SailGP itself. For example, from that NYT article...

Then add that on to this announcement we've seen elsewhere...

Notwithstanding the histrionics I'm sure are going on with the KiWhingersTM - what I see here is a decision on the choice of platform that fits into CHN's current path of developing/sponsoring sailors. And, though I think it's a questionable path in terms of long-term viability (will there be another OR after this iteration?, etc.) - it's a decision I can understand based on where they are now as a sailing nation on the world stage. Commit to one thing and get better at it...

So, their current interest is obviously much more on broader industry benefits than it is in being part of a sailing sports league right now. And I get that.

But in turn, it also greatly benefits ETNZ to have some global support for its vision - even from a country that's not participating in the AC - so ETNZ would bend over backwards to make it worth CHN's while. If it comes to paying to be just another sub-par team (SGP) or being paid and offered immediate global exposure as a premier "partner" (AC) - which do you choose if you're CHN?

But, it's also a huge gamble. ETNZ has to win the cup. AC75 boats have to remain the new AC class. The AC9F itself has to gain wide adoption. And there have to be well-supported intermediate events during off-years. Otherwise, there will be no development.

Again, I can see the longer-term logic here. CHN wins either way. But, as I said, I also don't think it negates CHN's SailGP participation in the next season or two by any means. It's simply an annual, global sailing league that can train foiling sailors. It will still be there after the AC36 spray settles. CHN's not stupid. When they get better at foiling - they'll want to show that off.
Click to expand...

Well, I'd say the above decision by team CHN didn't age well. My bet is that they will be back in next season. We'll see.

Re-watching some of the action at Cowes in 2019.  I'm wondering why the cats seem to lose so much speed through tacks, mark roundings etc, compared to the AC75s? See AUS go from 47 knots down to nearly 20. Wasn't the best rounding though, others kept speed up better, but generally the F50s seem slower to round than the AC75s?

Well, one thing you have is about 5 tons more weight with the AC75 - as well as 8 more meters of mast, more sail area, more crew, etc. But even so, you still also have a 15-20 knot differential for the AC75s...when they were actually able to go "fast"... 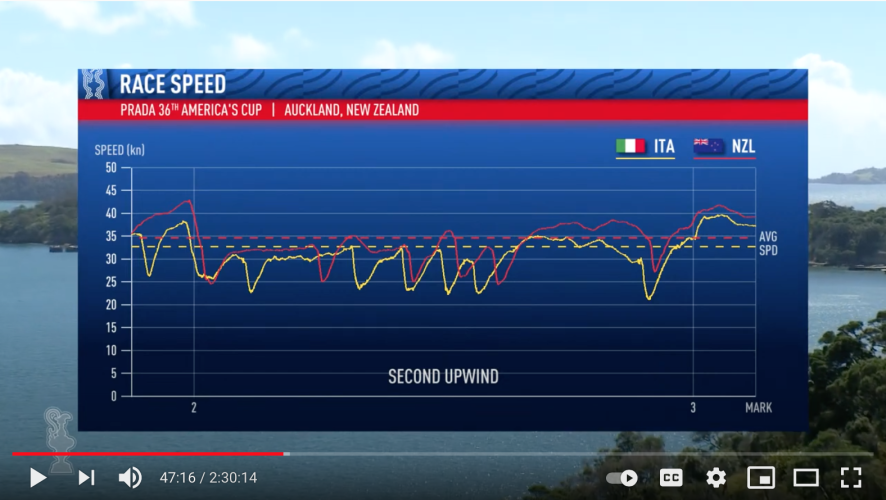 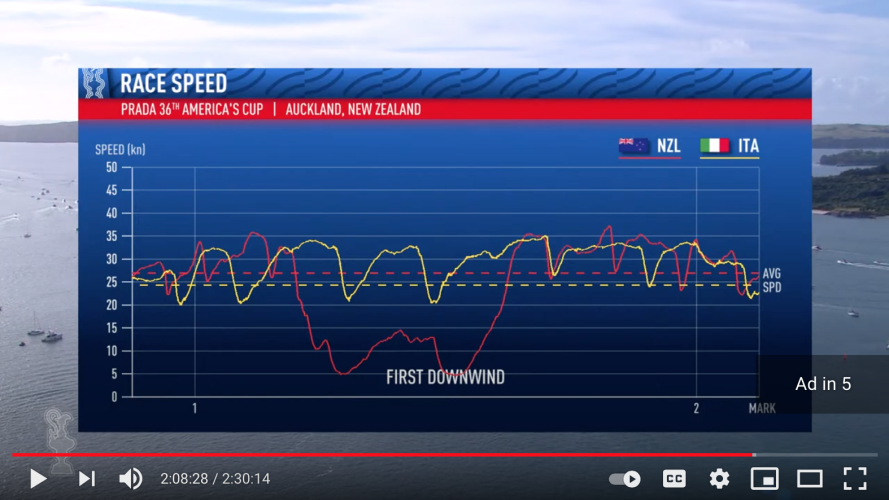 smackdaddy said:
Well, one thing you have is about 5 tons more weight with the AC75 - as well as 8 more meters of mast, more sail area, more crew, etc. But even so, you still also have a 15-20 knot differential for the AC75s...when they were actually able to go "fast"...
Click to expand...

I suppose that the maximum power any sailing boat can use  is determined by the ability to balance Heel with Righting Moment.  Max. width of the F50 is 8.8m, but centre of lift from the foil is somewhat inboard, as is the "ballast" - the crew. Will have to work this out one day.

Australia SailGP Team just announced their Crew Line Up for Season 2: Tom Slingsby, Kyle Langford, Jason Waterhouse and Sam Newton return from 2019. They added Nick Hutton from the UK plus Nina Curtis (who competed in the VOR in 2017/18 with Team Brunel) and Lisa Darmanin.

I hope Darmanin gets the gig which would put her out as Sailing Expert for SailGP's TV Coverage. Her consistently pumping up Slingsby irked me during 2019.

It's fun watching these teams come together. I'll be interested in the m/f mix on each - and the results that come from it.