yoyo said:
Why would AUS bearing off or supposedly hunting as some suggest be wrong? AUS has every right to choose their fastest path and AUS did not prevent GBR from staying clear. GBR rolled the dice ... and it didn't pay off
Click to expand...

Not saying "hunting" is wrong at all. In fact, as far as I know, there are no 'no shooting' signs posted in the rules. Just trying to get a better understanding of the context.

Sailbydate said:
Thanks, Stinger. Looks to me as if the Aussies had to turn, to avoid a collision. My vote is with the umpires.
Click to expand...

Someone may correct me but the rules may require that AUS hold course and there does appear to be a pinch-up a few seconds ahead. TS mentions it in the 'explanation' clip, think he said it was due to touching into better AWS/AWA or some-such?

My overall takeaway is that BA gambled by letting go of the close cover he'd had over AUS in the earlier part of the leg, then gambled again with that awfully close cross. And the refs had to be disciplined about what their tools showed, whether it was 'game-changing' to one boat or not. I had no goose in the game on that cross but as it unfolded I thought for sure that BA would jibe to avoid, then gas AUS. But since he was on the layline, he tried for the cross instead and damn it looked close, my jaw dropped!

And as far as the possible acceleration 'error' introduced? It's possible AUS was also accelerating.

It's possible Aus was accelerating, but if he was hunting (ie bearing away) then actually he would be slowing.
But we don't have enough evidence either way. Hence why I think they should release the video evidence of such incidents, even if after the event. Possibly it would lead to teams seeking redress if there was clearly a mistake though

enigmatically2 said:
It's possible Aus was accelerating, but if he was hunting (ie bearing away) then actually he would be slowing.
But we don't have enough evidence either way. Hence why I think they should release the video evidence of such incidents, even if after the event. Possibly it would lead to teams seeking redress if there was clearly a mistake though
Click to expand...

Nothing I have seen suggests a hunting move but yes, maybe that did happen.

SGP has done some good after-videos in the past where umps recount incidents and give detailed explanations; there's a fair chance they will do so for this one too. I do like the on-water umpiring and hope things don't ever start going to the room, although there is at least one case where because of contact a team did later get docked event-points.
Last edited: Aug 1, 2022

BA can complain about the software all he wants, I don't think an on-the-water umpire would have given that one to him either. AUS did what they needed to in terms of avoiding the collision. If you want to call that "hunting"/"professional protest"/"hollywood", go ahead- but they did alter course in a really tight situation, and the results were going to potentially cause significant damage if he didn't. It was the right call.

BA only has himself to blame for putting it in the umpire's hands in the first place.

atwinda said:
BA only has himself to blame for putting it in the umpire's hands in the first place.
Click to expand...

GBR may have chosen a perfect layline but (in retrospect) may have been wiser to continue on a few boatlengths past where they jibed, to allow for a duck behind AUS if necessary and still make the mark. Since AUS still had another jibe to do, that may have been the much smarter move.
T

All this talk about hunting. Hunting is allowed in Match Racing and SailGP.

trt131 said:
All this talk about hunting. Hunting is allowed in Match Racing and SailGP.
Click to expand...


Exactly, TS did what I would have done (although I'd be a lot slower ). Can anyone advise if hunting is prohibited in SailGP?
S

Sea Breeze 74 said:
Exactly, TS did what I would have done (although I'd be a lot slower ). Can anyone advise if hunting is prohibited in SailGP?
Click to expand...

MR.CLEAN said:
Spitty did his winning. His goal now is to stay employed.
Click to expand...

Stay employed by winning, no?
D

enigmatically2 said:
And if BA was accelerating he could have easily made that extra bit. But even if he is right, it was dangerous to assume the umpires would agree.
Click to expand...

And also SailGP RRS (and AC RRS) has an additional rule 7 that is not in the standard rules.

LAST POINT OF CERTAINTY
The Race Officials will assume that the state of the yacht, or her relationship to the other
yacht, has not changed, until they are certain that it has changed.

A bit questionable to say your rate of acceleration is a certainty that umpires should recognise.

I have to say I watched the race and GBR looked well clear to me without any need for avoidance by AUS, notwithstanding the commentator's febrile chatter. But no, I don't have access to the software that said otherwise.
Last edited: Aug 2, 2022
D

Sea Breeze 74 said:
Can anyone advise if hunting is prohibited in SailGP?
Click to expand...

dogwatch said:
It's limited by 16.1 ("changing course") but not prohibited. I don't see any argument that AUS broke 16.1 in this case.

I would tend to agree. If anything the wake shows a bear away not a luff up. Perhaps more bear away than required but they weren't hunting.

Jimmy Spithill: “This is the most talented fleet of sailors ever assembled”

United States SailGP Team skipper Jimmy Spithill reflects on the solid progress made over an exciting weekend's racing in Plymouth, UK. Read what he says here.

Includes a quick graphic at the very end

Brilliantly judged cross by BA in these boats at those speeds.
We need to see the full heli footage of the cross instead of the cutaway to the onwater (but I don't think Craig Mitchell would want that released - any more than the lionesses hand ball in the penalty box!). I think it would show that BA was around a boat length ahead so no collision possible.
Hard call I agree as the possibility of damage and injury in a 60+ knot crash would be terminal. But these are the 'best sailors in the world' and I think we should rely on their skill and judgement.

So for me no penalty.

Some banter on FB

RG’s take on it 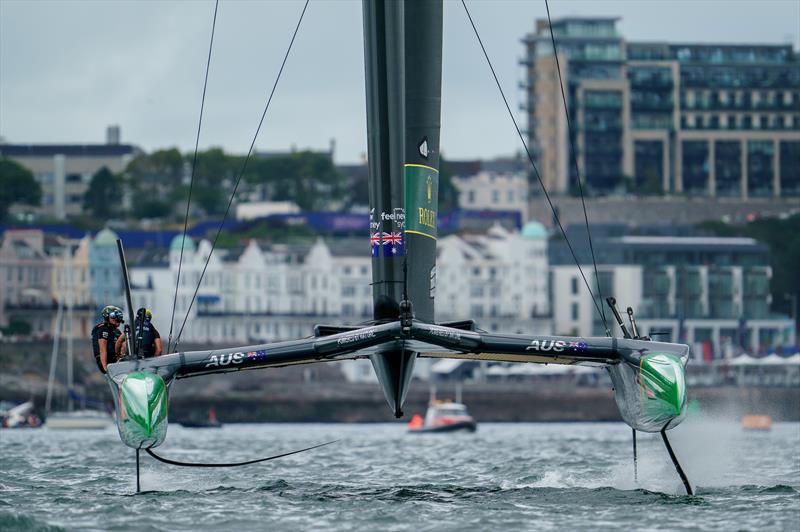 SailGP: Ainslie Incident - what the Umpires saw in the controversial Race 5 finish incident

An incident close to the finish of Race 5 of SailGP Great Britain determined whether local hero, Ben Ainslie or his nemesis Tom Slingsby (AUS) would go through to contest the Final, in front of Ainslie's home crowd.