Unkle Crusty said:
Our Yacht Club did a cruise around Vancouver Island in 017. At first we had quite a few interested. But then the power boat owners started adding up the fuel costs. 5 sail boats did the trip. No fizz boats. They either; used too much fuel, lacked cruising comforts, rolled like a bastard, had trouble punching in to waces, or all of the above. A Fisher 30 with 45 hp was the fastest under power, and the slowest under sail. The 39 foot long keel sail boat sailed and motored well. The 40 long keel heavy sail boat was a bit slow, both modes. The 32 foot Hunter with the big main and small jib, went okay, both modes. Our Viking was the second fastest under power at around 7.1 in flat water, and the fastest under sail. All told we did 980 NM. Was easy to add up the fuel used. The main tank is 48 liters, which is not much. We carried three 20 liter jugs. We stopped most everywhere and took 2 months. Can be done in a couple of days in a fast fizz boat. But what for. My idea of a power boat, is a bigger engine and trim tabs for the Viking. Might hit 7.5 to 8. But we do that with the sails up. We motor at around 5.75. Sometimes at 3 when the waves and wind and current are against us. Sometimes zero, for a while, until the tide changes. The Viking has a shit hot motion.

The other 360 boats we met were all sail. An Ontario 32 from Sidney BC. A slow heavy steel boat from Puget Sound area. We would be about 2 hours in front of him after about 40 miles.

We went around solo (one couple) in 2013. We met lots of wonderful people. We had a very light-wind event, spent lots of time motoring up inlets to supposed provisioning spots. We had a great time. 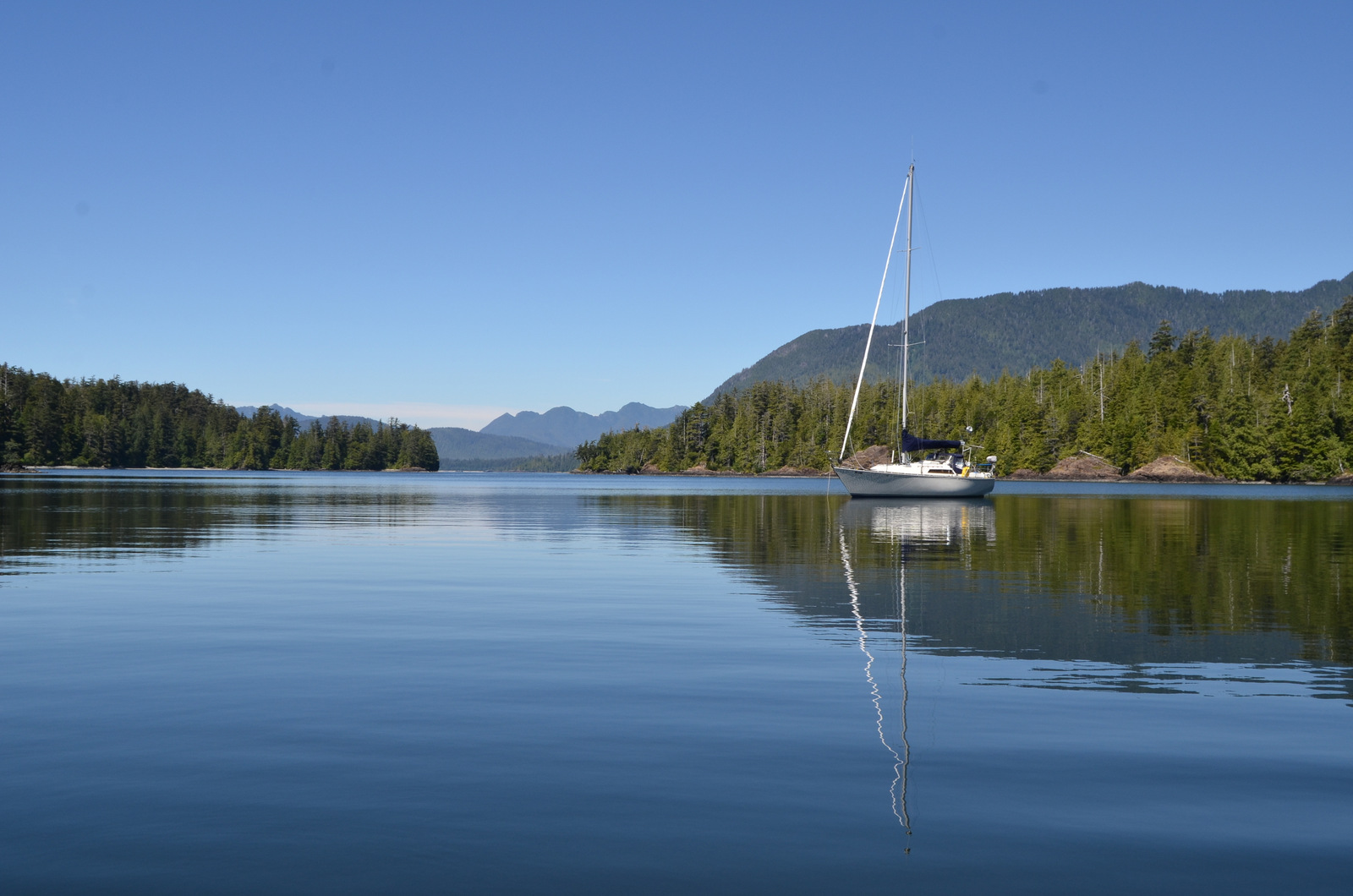 Uncooperative Tom said:
Would you be insulted if I nominated this for Admiration by the Society?
Click to expand...

I would be honored. The only thing more admirable in this thread is that rediculouse Cowmaran. Oh wait. you weren't talking to me. I take that back.

Beats the crap out of me

If you're buying or building a new boat,  the cost of fuel (even if it tripled) is not a factor overall.   (availability of fuel at any price however, might be a determining factor when choosing your dream/bug out boat)
Click to expand...

Unless you are a commercial operator...

Betwixt and Between PNW

fastyacht said:
Unless you are a commercial operator...
Click to expand...

And then, there's That^

To me, something like this has a lot of merit.

Another in the same vein.

Uncooperative Tom said:
Would you be insulted if I nominated this for Admiration by the Society?
Click to expand...

I would be honored. The only thing more admirable in this thread is that rediculouse Cowmaran. Oh wait. you weren't talking to me. I take that back.
Click to expand...

I already nominated the Cowmaran. The builder wasn't all that flattered when he found out, for some reason.

Those cats are nice..but very expensive to own and operate

Uncooperative Tom said:
I already nominated the Cowmaran. The builder wasn't all that flattered when he found out, for some reason.
Click to expand...

Thanks, but NO thanks!

The antipode, and home of HFCs

A sailor’s powerboat isn’t a boat... it’s a plane to new cruising grounds! Nothing goes to windward like a ... 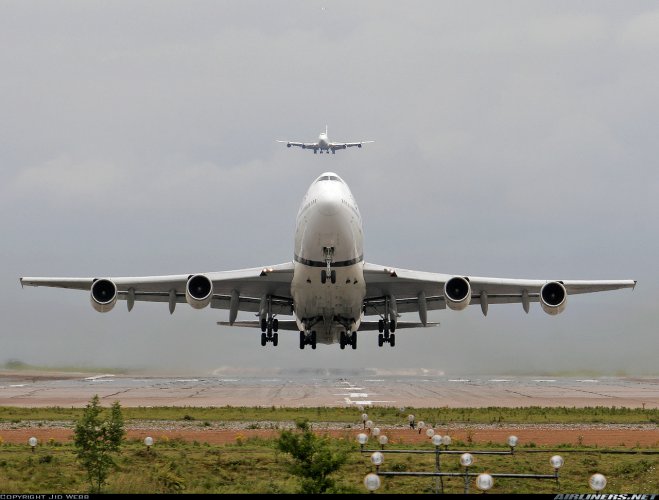 teamvmg said:
Thanks, but NO thanks!
Click to expand...

OK, but it really is intended as a compliment. And... um... that thing is Admirable.

Grizz said:
I always had a yen for a MacKenzie Cuttyhunk Bass Boat. A little spendy though-here's a 1958 28 footer for only $90K...

A friend of ours restored one of these.  If B.O.A.T. stands for "Break Out Another Thousand"; then W.O.O.D. stands for "Wads Of Outrageous Dough"!!! LOL!

Best cruising yacht I have ever had! 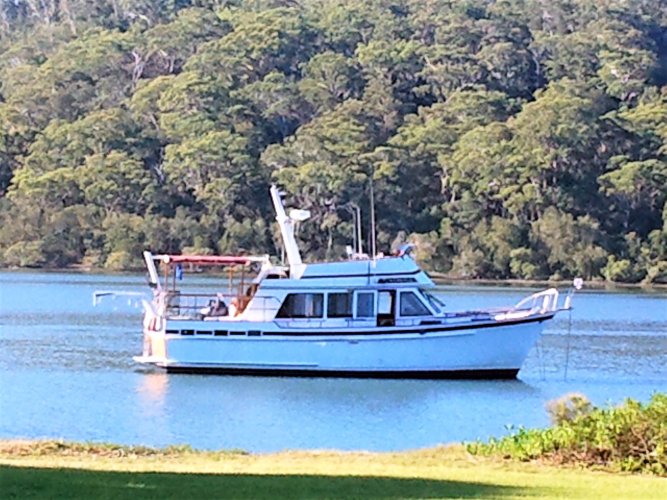 But I should not have sold this one! 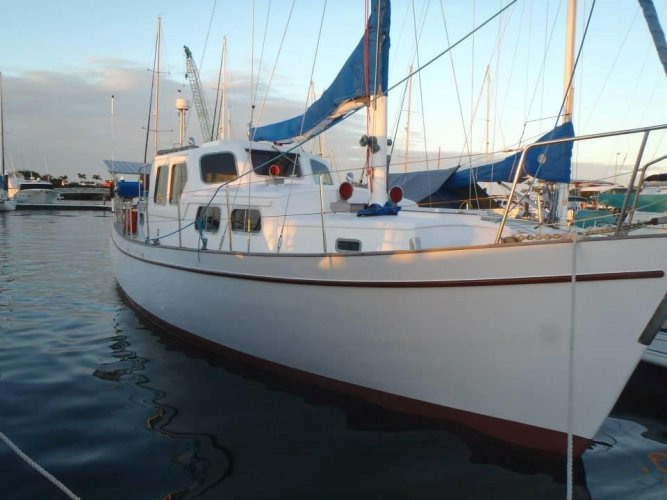 lydia said:
But I should not have sold this one!

Niiiiiicccceeee motorsailer, yacht!  What is it, and what did she motor at, and fuel consumption? I've met lots of folks that said that they like or used to sail that own these
Click to expand...

Dumb question, but what's the sail for?  Does it help with the motion, or stabilize at anchorage?  Starting to head to Mac26 territory if you ask me.