Sorry Jane, no beer and brats at the SBSSA Yacht Tour this year. Scotty D. is retired. But, if you're looking for a little twist on tradition, look for the J. Wilkes table. The winemaker will be pouring his rediculously good Pinot Blanc and serving steamed mussels from Kanaloa. You might even see me there

Last I heard there were less than 40 tickets left. I'm guessing there won't be any tickets for sale at the gate. If you know anyone who wants to go, you should have them contact J9 ASAP.

See you Saturday (or Friday at the bar after Opti practice).


Janer said:
Matt - You are a prince! I can't wait to see you "sailing" your bike downtown.Are you and KP grilling dogs again at the Sea Shell fundraiser?

Last night would have been a very forgettable wet Wednesday had it not been for the Coast Guard stealing the weather mark in the middle of the race.

If you look closely at the photo hopefully attached, you can see another sailor who didn't make the race doing a low-level fly by in a light twin. 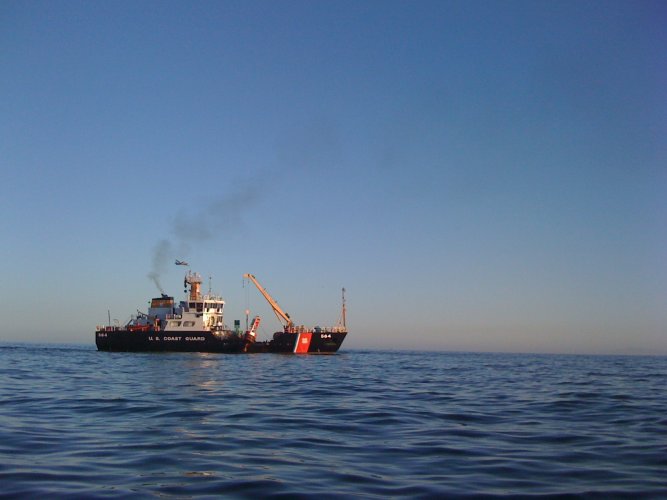 Yes Jeffrey that was definitely a first and thanks for the pic. RC had picked that bouy because of its close proximity and the fact that there was 0-3 knots of wind. oh well

Sunday is the Wilson Race and Dana and Bud created a "long distance" course chart which was reviewed by the Sail Policy Committee last night. There are a possible 14 courses varying in lenght from 9 to 40 miles. The Wilson course will be decided on the day of, depending on conditions.

OK the photos you have all been waiting for...

As always, you're a good sport Matt! 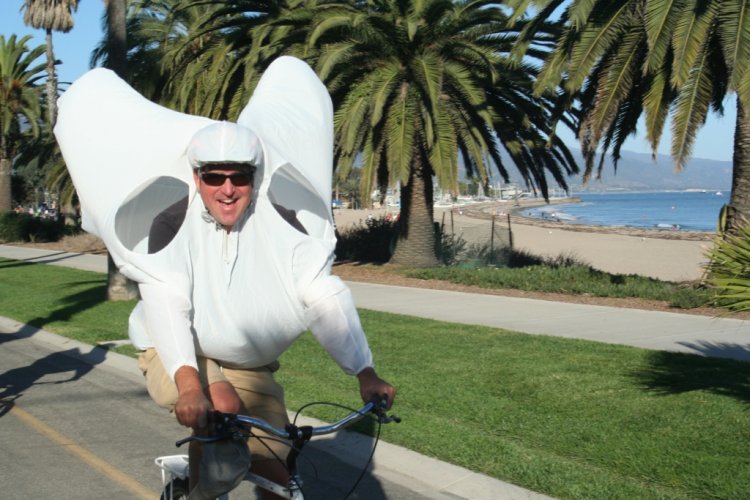 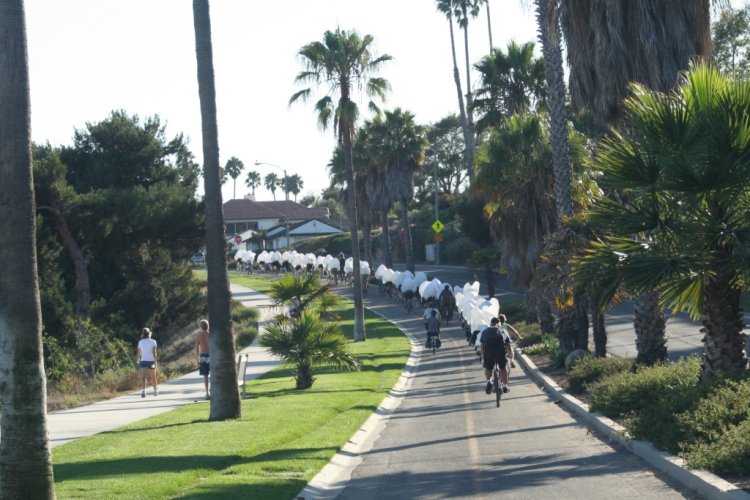 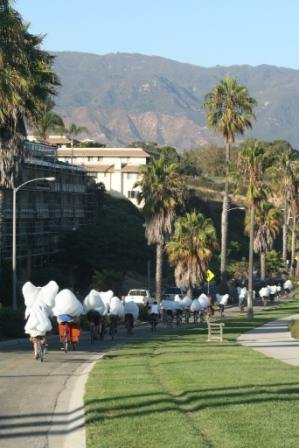 I'm sure all involved had fun though

One of the things that came up at Sail Policy is the possibility of getting some Ventura/CI boats up for Holiday Regatta. There is a high-point series for the year which includes the Holiday, and some of the boats down there have been participating in it.

So we need to get entries in for the Holiday early to help us show a good regatta for the boats from V/CI. Go on-line and submit an entry now. You know you're going to do the event - it's always a big one!

Janer said:
OK the photos you have all been waiting for...
Infamous sailor Matt W. doing the Aeolian Ride public art performance. He smiled alot!

As always, you're a good sport Matt!


those shirts are almost as cool as the pirate shirt from seinfeld.

It was like a hot summer day for the 10th annual Sea Shell Wine Tasting and Boat Tour. Very successful and thanks to the multitude of volunteers especially Kent &amp; Jeanene, Scott and Leslie who have always been the backbone of this sold out fundraiser. Lots of excellent wines; my favorite J. Wilkes who poured his wine and cooked mussels in a wine sauce as the appetizer. Yikes. 400 people attended and a lot of wine drinking and great appetizers kept everyone VERY happy.

The wind never got over 11 today but tomorrow could be a different story with gale warnings and two races on the books;

the Wilson long distance PHRF and Lady at the Helm in the CHRF class. It's already blowing at my house. Good luck to all. I'm bringing my life jacket.

Saw the start of the Wilson race. Windy. Small turn-out......only five starters with it looked like two classes. Mike Schaumburg was hit in the head with his boom just before the start. I was told he went to the hospital to be checked out. I hope he is ok.

Sounds like Jan fell off the J125 I am sure there is a story there :blink:

Just talked to Mike S. He said he blacked out for a little bit and had some stitches put in his head..........but is doing fine. Glad he is well.

Ball Breaker said:
Just talked to Mike S. He said he blacked out for a little bit and had some stitches put in his head..........but is doing fine. Glad he is well.
Click to expand...

So, what you're saying is nothing is out of the ordinary? Does he see snakes coming out of the toilet? :blink:

I received an email from EWS (Ruckus FT owner) regarding Fiesta Cup for 2010. He's obviously one of those go-getters that every class needs. He already has 5 Flying Tigers committed to coming to Fiesta Cup and promised to keep working on owners up and down the left coast. And yes, we will happily add Flying Tigers as a one design class in the event adding to Farr 40's, J/105 and Melges 24. Thanks!

Put this entry where it belongs...


Madmax said:
Holy Crap batman, The Wilson Race was a blast! The J125 Warrior ROCKS!
Started in 18-22 with puffs to 24. Had a long beat up to Platform Holly off Isla Vista. Pretty square beat, slightly right favored. Pounded upwind with the number 3 and all went well. Were racing a SC 52 "Prevail" and a J105 "Repeat Offender" mostly due to the fact that they were the only boats we could see.

There were 10-25 degree windshifts and we tacked on shifts all the way up the coast. Rounded the Platform and because it was almost a square run and max puffs were 24 we put up the Whomper..the A2. At this point we were probably winning the race, close in time though with the J105.

Set and BLASTED OFF! As we migrated offshore looking for steadier conditions, more constant 22-24 we were met with a nice surprise. Wind shot up to 30 and never went below 25 and we were to say the least "Hauling the mail" . The J125 in 30 with the A2 up has enough power and speed to pass waves. We would climb up the backs and shoot down into the troughs only to do it again. The swell was small and windwaves were 6-10 feet. Constant 20 knots with frequent blasts to 24...boatspeed.

We continued down the coast and finally realised that we had to gybe and get rid of the A2. We letter box dropped the A2 and then gybed. Everything was fine, we were still surfing at 20 with the main and jib and 130 apparent. Boys were setting up the boat to put a smaller kite up and our bowman, Jan, decided to go for a swim. Mind you we were going 18-23 at the time still surfing like crazy and as Jan walked back from the point with the tack line the boat surged and he flipped head over heels over the bow. I tried to turn towards him...deeper and flick him back on but it was to late. Kit our boat man ran for him and got a hand on him but frankly at 20 plus knots...no way. Ker-plunck...Jan gone.

Instant broach into the wind on port, crew sprang into action and 3 people kept an eye and pointed at him. 2-3 other rans to the bow for a jib douse. Jib was 70% down and we sailed 2 more boatlengths and tacked, never getting more that 4-5 boatlengths from Jan.

Jan looked OK and after the tack we bore off to a broadreach and headed up beside him with the leeward beam and by the time the boat stopped he was abeam the mainsheet winches. Pulled him back on and had to put the jib back up, just to bear away. It was now 32-33 knots steady. Bore away and gybed again and ended up on port with a wind angle of 120-130 headed for the barn. Continued to surf at 20-24 knots with main and jib, not really surfing but planning 65% of the time.

Checked on Jan and he was OK. Had a nice mouse under his eye from hitting the rail. He showed no signs of shock but was a little shaky. We watched him closely and finished just behind the SC 52.

Parked the boat and trudged up to the club. Jan was fine but decided to head home for some Ice on his lump.

Larry Harteck and the "Repeat Offender" crew managed to sail the whole run with their chute up and won easily. Dana, RC chair said he had never seen a J105 go so fast. He said they were planning and looked like a skiff. This did not come without a wipe out though, Larry said the were pinned at least once during the 3 gybes they did.

All and all, INSANE RACE. Most fun running I have done in a LONG time. One thing is clear....The J125 needs a smaller kite then the A2 in 30!

I give the entire Doc Laura crew a big kudo for acting so fast and staying so calm during the man overboard drill. It could have been much worse. The crew pulled together and did a superb job.
Click to expand...

glad you all were able to recover Jan safely... 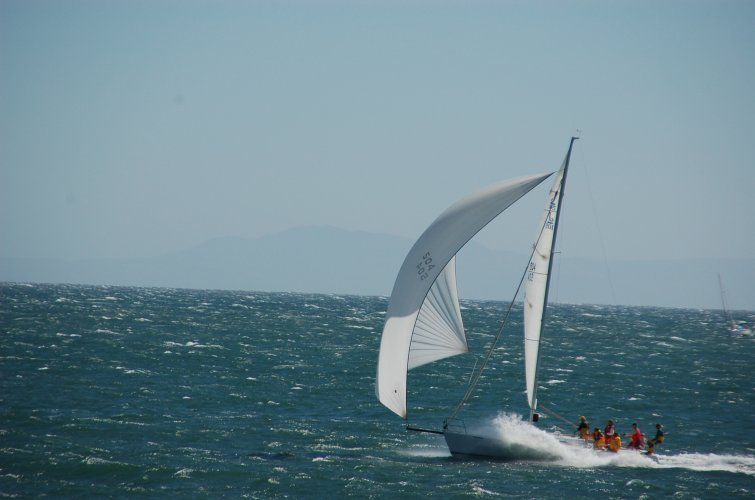 Janer said:
I received an email from EWS (Ruckus FT owner) regarding Fiesta Cup for 2010. He's obviously one of those go-getters that every class needs. He already has 5 Flying Tigers committed to coming to Fiesta Cup and promised to keep working on owners up and down the left coast. And yes, we will happily add Flying Tigers as a one design class in the event adding to Farr 40's, J/105 and Melges 24. Thanks!
(BB -Glad Schaumburg is OK) :blink:
Click to expand...

I'm not sure if EWS already counted me, but if not, there will be at least 6. We (FTs) are making a concerted effort to get around more in 2010!