Hopefully some other Anarchists will chime in on the real scoop out on the high seas. Still blowing 30 and the beach is a sand storm. The little kids had their "opening day" for sea shells, but that was abandoned..all orafices filling with sand

Janer you have the story fairly correct except that it did not fold during a jibe the boat was just reaching along when it folded. Here is a link to some photos taken on the scene Not by me though I can't take credit for these.

Thanks for the clarification.

Here's one of those shots.

The real story, cause, I WAS DRIVING when it happened:

On the way out to the start and while turning the engine off, I noticed this little shrunken head figure with wild long orange hair and no teeth on a string. I pulled the guy out of the engine compartment key area, and hung him, the mascot, on the backstay. Tom Parker said "Oh I would not do that, he's our good luck mascot, you should leave him in the engine compartment where he lives"

THIS IS NO BULLSHIT. So I hung they guy on the backstay and we went racing. The shrunken head tried to give us a sign. Pounding upwind with the number 4 in 25-29 knots, the jib car exploded and sent those bastard ball bearings flying. We salvaged another car and blamo, car number 2 gone. Jury rigged and went on to win the race.

In between races we looked back and the mascot had been scalped. All that was left was his scalp and hair. Tom Parker then said "Thats not a good sign". We sailed around between races catching waves, getting stuck in irons, usual shit you do with only the main up in 25-30 while trying not to flog the sail and blammo...the boom broke.

PS Thats not me driving, BUT YOU CAN SEE THE SCALPED MASCOT ON THE BACKSTAY. 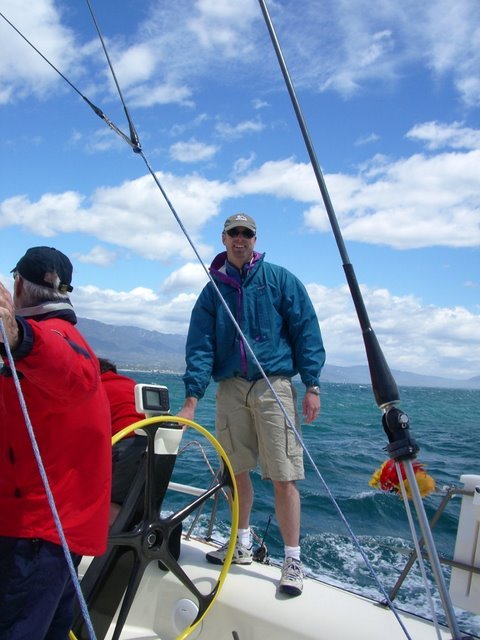 Here's the forecast from NOAA for this Wednesday:

Yah, but, WTF does driving have to do with the boom vang?

Good thing Lauren does not have that policy when shrimp harvest season is going;-)

Might get expensive when chutes blow out on Coastal Cup on Taxi!

Maybe you could replace the shrunken head with one of those talking Dr. Laura dolls.

Thanks, we always love your posts. But the good stories are on the previous page.

Madmax said:
Yah, but, WTF does driving have to do with the boom vang?
Good thing Lauren does not have that policy when shrimp harvest season is going;-)

So Max, what color was the kite you flew on Sunday. I didn't see it up. Did I miss it?

BTW, we didn't get to eat our shrimp. We still had a few pounds to shed for class weight.

Why is the Mad one putting you down?

He sure is proud that they let him drive Taxi AFTER the race was over.

On the way out to the start and while turning the engine off, I noticed this little shrunken head figure with wild long orange hair and no teeth on a string. I pulled the guy out of the engine compartment key area, and hung him, the mascot, on the backstay. Tom Parker said "Oh I would not do that, he's our good luck mascot, you should leave him in the engine compartment where he lives"

Looks like you've pissed off ALL the gods. LOL!

Be careful this weekend dude.

Looks like a repeat of last Weds and last weekend!

The wind at 3:30 should be just like last week except in reverse

Ok, the report is not good and I will not go into details at this point because:

1. It is the first time I have seen 40 knots while racing.

2. I was in the worst crash I have ever been in..Farr 40 with chute up rounding up at the finish line, Lancer 36 coming right at us finishing up wind, I knew for about 5 seconds that it was going to happen. Very scary, incredible that no one was hurt, very thankful for this. Rigs did not come down (miracle). Hole in the bow of the Farr.

3. I am drunk and I cannot get my boots off. Zipper is stuck on one of them. Guess I'll sleep with it.

Sitting at the club the bow to bow crash was quite spectacular.

The Farr's main ragging, chute-4A? teent tiny, on edge and then apparent wind 130 and 20-25 knots when the mother of ALL puffs came through. It looked like it was in slow motion. The puff was easy 30+ and was frothing the water and the Farrs main was already blown, the chute was more than 50 % collapsed and the boat was only healing 10 degree's, about 1 degree more than the rudder would take. Unfortunatly a Lancer 36 was in the way going upwind straight at them on starboard. Amazing the Lancer did not avoid what was clearly a overloaded Farr 40 on edge and sliding towards the wall.

Smash, almost bow to bow. Sickening to watch. For sure thought it was going to be "Hair-teeth and eyeballs"

No worries Dirk and Jill. At least no one was hurt. Boats are repairable.

I just wish you could have seen from our vantage point at the club, how gnarly that puff was.

Minor in the big picture scheme of things. Big hugs.

Hello, Allstate, you're never gonna believe what just happened! Not a good year for So-Cal Farr 40's (and DH's old boats). Good that nobody's gotten hurt in the recent carnage. Heard that the new Piranha was out in MDR tonight. CalYC cancelled tonight's race, too windy and bumpy. Smart move!

Where's the pics? Big damage on both boats. Paul took a phone pic and supposedly sent it, but I never got it.

The Farr's bow is split wide open vertically 2- 3 feet starting about 6 inches above the knuckle. Green laminate inside there BTW. Bent pulpit too. Also the brand new ayso kite was wrecked – the Lancer was carrying some of it as a masthead pennant for a while

The Lancer had all the port stanchions carried away, with the bases driven thru the deck, plus the port spreader lost. Probably would have been worse for the Lancer if it didn’t have that big metal toe rail.

Very lucky there were no injuries – the rest is just plastic, glass, &amp; metal

Gonna need some duct tape to deliver the boat to the yard tho.

How can this happen? Well, the circumstances were a windy day, a mix of skills, and two boats finishing on the same line, at the outside mark – one going upwind, one going downwind (different courses)

A little sore today and bummed. Body feels like it was in a washing machine for a few hours, hung up to dry and then had Mt. Gay Rum poured over it.

I failed to mention that we did win the race, however the RC has now declared the race abandoned due to improper shortening of course. 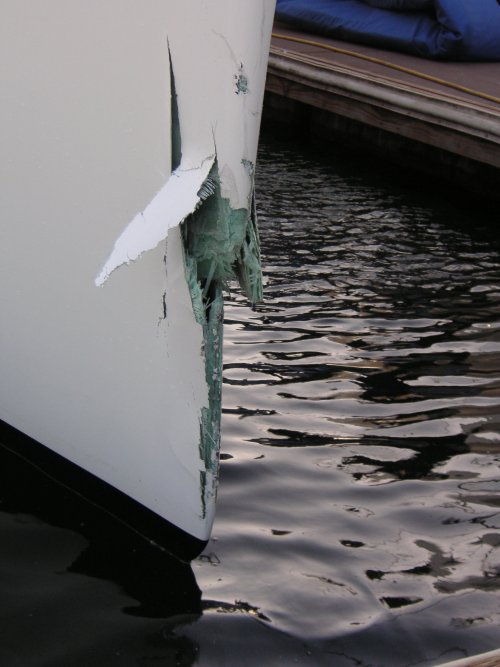