Watch this thread for reports from anarchists on the 3BF racecourse in San Francisco Bay...

The Three Bridge Fiasco has some incredible rules, ones that could drive most race committees and any novice racer up a wall. The salty sailors of San Francisco seem to love this race and basically everyone who sails will be there. With 359 boats registered, a starting line that goes either way, no set course and a finish line that also goes either way, the name of the race - Fiasco - seems comparatively mundane. The Three Bridges and associated marks are: Golden Gate (Blackaller Buoy) Bay Bridge (Treasure Island) and Richmond-San Rafael (Red Rock) and can be rounded in either direction.

War Dog started an anarchy fleet a few years ago - An Unofficial Anarchy Fleet he calls it, and is now up to 40 boats full of anarchists. Well not so full - this is a D/H or S/H race. In heavy air it would be a bear for two people to sail some of these boats around this 21 mile course with a heavy afternoon ebb tide, but this year's 3BF looks like it could be a drifter.

If the wind picks up, some of the folks who've been planning their course all week may change it from Counter Clockwise (Treasure Island, Red Rock, Blackaller) to Clockwise. Either way, the SAers are not just racing for fame and glory, but also for Rum and Tequila, along with some SA and H20 Shots swag.

This fun race has more participation than most sailing bodies of water ever see...something to think about if you're trying to get the boats out in your lake or bay.

For those of you on course who want to send in reports - have at it.

Clean, Photoboy and I have cobbled together a little plan and I am going to be out on with H2O Shots' Photoboy on his 20' red rib starting in the mid morning near TI and will send in reports from my Blackberry. You can call or write me, and we'll also be monitoring the "Unofficial" SA channel 72. Clean's gonna help with the posting.

excellent! Don't forget that photoboy has offered an H20Shots t-shirt to the first three anarchists to show him a legible sign that says "Yankees S*ck" or "F*uck the D*dgers" on the water so he can shoot it.

Dixie said:
Watch this thread for reports from anarchists on the 3BF racecourse in San Francisco Bay...
Click to expand...

I'll be on the Got Wind and Water Photo Boat (no, we aren't competing with PhotoBoy, we have a different agenda). This Photo Boat is a Green Tartan 4600 named 'Gokuraku'.

I'll have my netbook computer with me, will be monitoring channel 72 - I'm hoping to be able to get online while passing through Raccoon Straits and will attempt to upload a photo of the 359 boats drifting around the starting line for all the SA'ers who will not be sailing in the race. I'm also going to attempt a shot of boats getting around the Blackaller (clockwise) with the Golden Gate in the background.

This is gonna be tits. Rain has stopped up here in Petaluma. Sounds like sun. I'm bringin my Speedo!

Not exactly on the water yet, I've uploaded some SailFlow Graphs to the Got Wind and Water 3BF pre-race photo album.

In the spirit of Valis, there are graphs for the GG Bridge, Pt. Blunt, TI and Corte Madera Channel.

There is also an intelecast mixed surface plot and the official Surface Anaylsis.

You should be able to follow VALIS' progress via her AIS signal here. EVK4 is helping the skipper double-hand this winner of the 2010 Pac Cup

Just picked up donuts for the crew. I slept in my foulies; it's race day.

See ya out there!!

Clear skies in Sausalito, next to no wind in the marina.

More from solosailor, who won the singlehanded class last year

the white m24 hooked to the white VW van is going in the water -- the blue open 5.7 (or whatever) has a jib up in the parking lot and is showing some breeze from the east 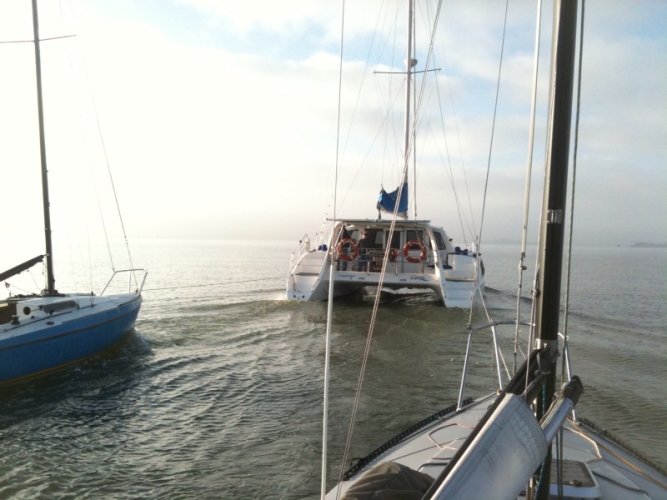