rh2600 said:
I haven't seen the video, but didn't this crash to leeward as described?

I thought we argued about pitchpolling propensity?
Click to expand...

We had argued about the different possibilities of the boat crash, mainly to windward.

Of what I have seen from the video the bow went suddenly up and the boat fell to winward, very quickly.

The video is back on the FP.

Different video from yesterdays one. Taken from another angle, and even poorer quality.

has all the signs of rudder letting go...which could be the tee foil trim control or failure as well as rudder itself.   We know exactly what happens on the Q23 when the teefoil decides to part company with the rudder!

^ Yep, sure looks like they lost grip at the back - bow suddenly spearing up into the wind....

Fickle FP, wasn't there some positivity after the 'stable flight' video, now it's hopeless

nav said:
^ Yep, sure looks like they lost grip at the back - bow suddenly spearing up into the wind....

Fickle FP, wasn't there some positivity after the 'stable flight' video, now it's hopeless
Click to expand...

I don’t know. It’s the hilarious crash pretty much all of us saw coming. I still say it’s a dopey design, but won’t fault it for crashes in the learning/prototype phase.

If they’re crashing like that on a regular basis once the real racing starts, they’re a failure. For now it’s just a prototype with some funny carnage.

I didn't know it was possible to have such crappy video quality these days....

JimBowie said:
"Lost relevance to sailing public".  Really?  When, in 160 years, has it EVER been relevant?

Half "the sailing public" is sitting on the rail.

New approach to stadium sailing.  Take the bleachers along with you.

The AC has been vastly more relevant, most of its history. It's just that the modern PR hype has ignored the fact that the AC boats used to just be big mainstream racing yachts. The AC foilers are not.

In part, the belief that the AC boats were not relevant comes from US experience. It was quite different in England, when even the J-size boats often used to race week in, week out in local regattas. There's also a fair amount of simple PR hype.

The AC boats used to be built to existing rules - not to new rules as with the foiling AC boats.

The AC boats used to be built to the same rules as the typical smaller boats on the regatta circuits in the USA, UK and other parts of the world - not to unique rules as with the foiling AC boats. That J (or the original) was built to the same Universal Rule as the dozens of Ps, Ns, Ms, Rs and Ss that raced in clubs and regattas across North America. The Metre boats were similar - so similar that 23 Metres and L x SA rule boats were converted into Js. The smaller Universal Rule and Metre Rule boats were the foundation of widespread yacht racing and made up a very large proportion of the entire racing fleet. That's not the case with foilers.

The Js and other AC boats also raced against normal club and regatta fleets, especially in the UK. A British AC challenger of the '30s could race at about 20% of the active sailing clubs in the country in a single season. AC boats like Magic, Galatea, Valkyrie II, Endeavour and Vim had long careers as typical big club and regatta cruiser-racers. The AC foilers do not do normal club regattas, and none of them have had careers before and after the AC.

Up till and including the J Boat era, for each AC challenger or defender there was at least one boat of similar speed, size and shape that also raced on the regatta circuit, but had nothing to do with the AC. These were boats like Cambria, Velsheda, White Heather II, Britannia, Satanita, Ephygia, Katoura, Navahoe and the early Meteors. That's not the case today - there are no 50 or 72 foot foiling cats out there on the normal racing circuits, and there are not going to be any 75 foot foiling monos taking part in normal events in mainstream regattas like BIRW or Cowes Week.

The fact that there were boats that were very similar to the AC boats, which were built without the slightest intention of racing for the AC, shows how close the AC boats used to be to "mainstream" racing. It's as if the AC was being sailed to the IRC or ORCi rules these days.

By the time the 12s were selected ocean racing was on the rise, but there were still lots of 8 Metres, 6 Metres, 5 Metres and 10 Metres racing around the world. There were even still M Class events in Cali, so the 12s weren't the biggest and fastest inshore racers of their time. The 12s were still racing as a class in Norway, I think. Eights were racing at class events in Scotland and Seattle. As far away as Australia, there had still been recent national events in 8 Metres and 6 Metres. That's not the case today. There is no 50 foot monofoiler fleet at any regatta. There is no fleet of 50 foot monofoilers racing each week in Sydney, Seattle and the Solent.

The simple facts are that the AC boats used to be pretty much mainstream big boats, of similar design, speed and size to many non-AC boats, and built to the same rules as hundreds of smaller boats that did local regattas alongside the AC boats. None of those factors apply with the AC foilers. The AC was much more relevant to the typical sailor in the past.

Initially removed due to being too obvious which spy took it?

Really hard to tell whats going on at that ultra potato quality.

I suspect that a crash like this on the full sized version would break the mast. What would happen to the crew and the rest of the boat is probably ugly as well.

The sequence seems to be:

Boat spins into the wind

Thanks Fireball, totally makes sense when you put it that way.  Hard to predict from a VPP / CFD simulation.

Curious said:
The AC has been vastly more relevant, most of its history. ......

None of those factors apply with the AC foilers. The AC was much more relevant to the typical sailor in the past.
Click to expand...

Used to race to the same rules as well

Fireball said:
I suspect that a crash like this on the full sized version would break the mast. What would happen to the crew and the rest of the boat is probably ugly as well.

The sequence seems to be:

Boat spins into the wind

How would this play out differently in a cat?

But I doubt they are going to be exactly the same capsizes.

In this case the boat lifts up and the leeward foil comes to the surface and ventilates. So the hull falls from maximum height, which is the distance from the t-foil to the hull.

In a cat this distance is smaller. The boat just falls to the leeward arma.

The cats mainly capsized after a pitchpole. I don't recall seeing anything like the capsize in this video

I am no tech expert, so I am just guessing.  But compared to a foiling monohull with parallel foils (moth like) or a foiling multihull, I think this has definitely some bigger side loads on the rudder.

For example one month ago in the moth my rudder vertical exploded at the bottom in 20 knots and I didn't even capsize. The boat sky dived and then fell of the foil. Similar when it happened to the superfoiler in adelaide. yes, they capsized but did not dramatically change course in the process.

Here it seems like the boat totally goes in a spin when (we assume that) rudder snaps, because rudder/main forces are not aligned.

Regardless of my feelings about the GR75 things like this should be expected with a new design like this.  So no “I told you so” from me.  That’s why Ben’s Boys are learning on a small surrogate.  Just hope no one gets seriously hurt in the process.

Because the winward hull of a cat or tri prevents most often a ww capsize, contrarily to a mono.

This thing will murder the AC cats when it's up and running...! The beam of a cat only gets in the way. Such early days and the doubters are like vultures and are coming in for the kill.! Did you see the gybe..??? It was nano seconds. I live development, this thing has so much potential IMO.

Fireball said:
I suspect that a crash like this on the full sized version would break the mast. What would happen to the crew and the rest of the boat is probably ugly as well.

In the new video, (if it's the same incident, the clip doesn't show the boat capsizing), it looks like the starboard foil ventilates a la Moth, with the same result: down the mine they go. I think the image below is the first one in the clip, pity they didn't include a bit more of the prelude and aftermath as there's a lot of spray from the rudder too. It would be interesting to know which came first.

If the rudder snapped, there should be nothing from the back of the boat. Perhaps they're just too high and both rudder and main foil are ventilating? It's pretty flat water, so good time to see just how far they can push it.

The port foil seems to have much more anhedral, perhaps to avoid such severe ventilation? 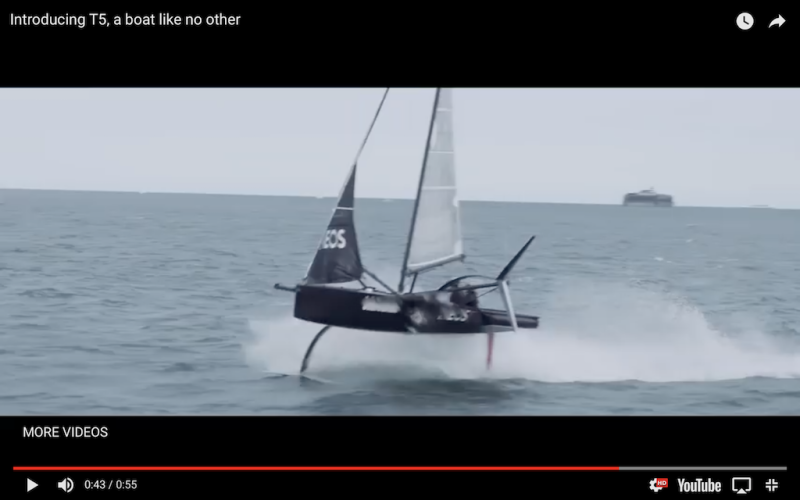