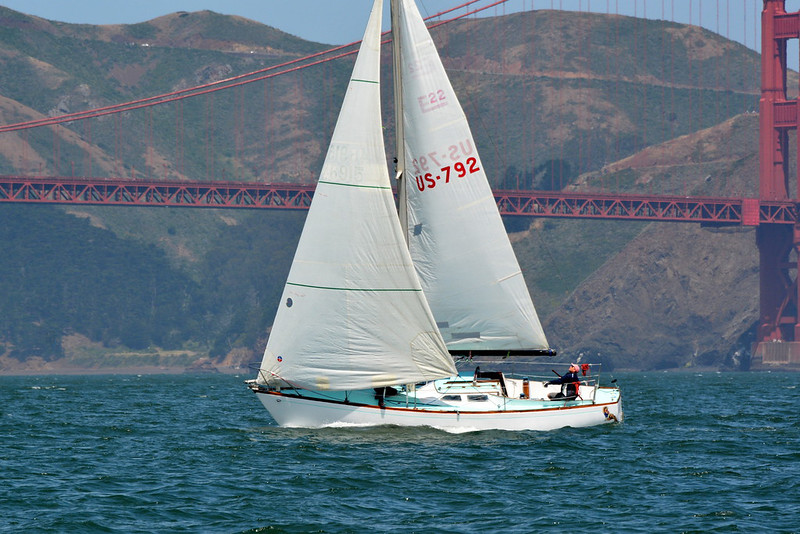 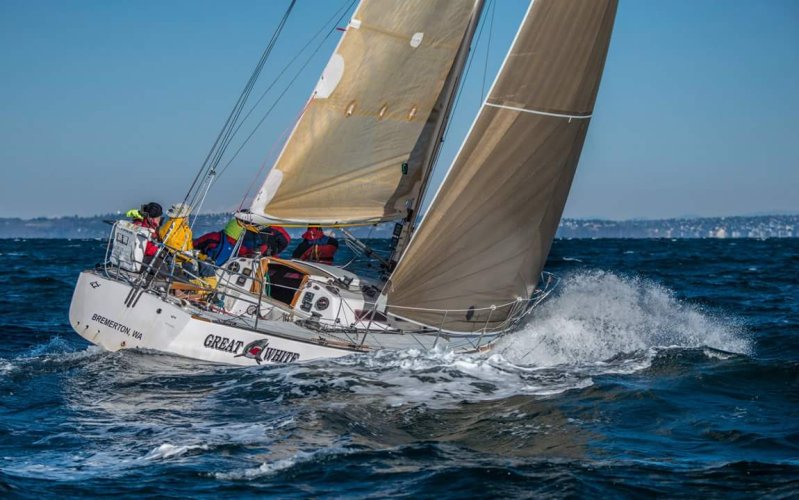 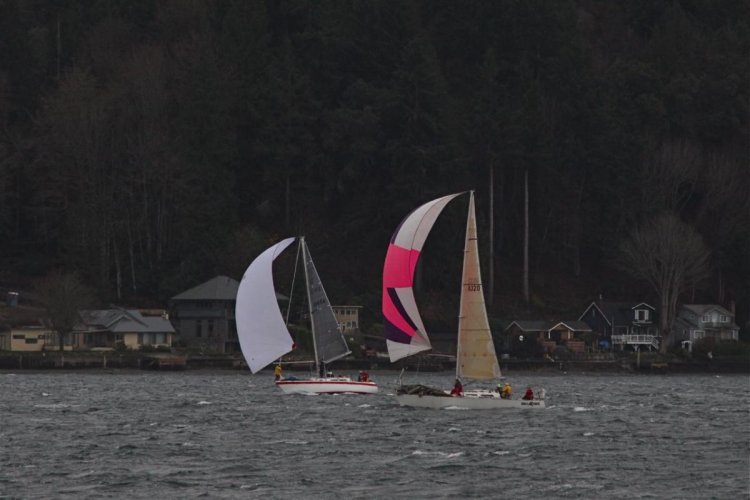 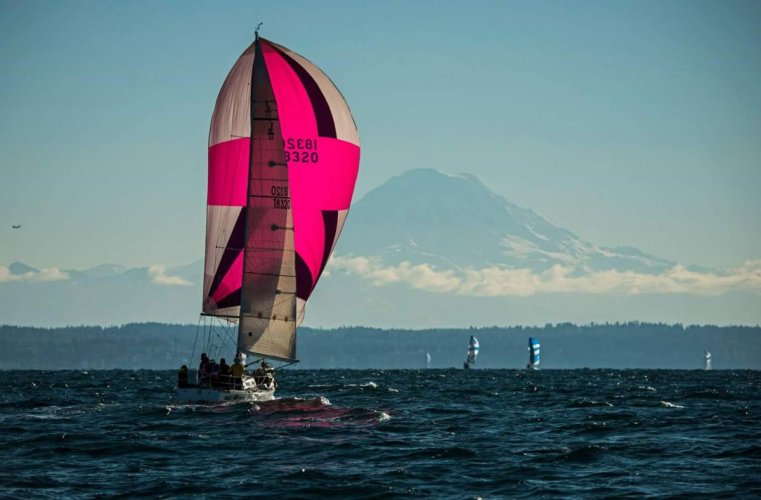 Fun thread. Maybe a little info about the boat and where your sailing.

This is Lively Lady, Mull 30 - a strip planked 30' speedster sailing under the Golden Gate. She was designed and built in 1967 as a special Mull prototype that changed boat design.

Sorry, but I'm going to carpet-bomb this thread: 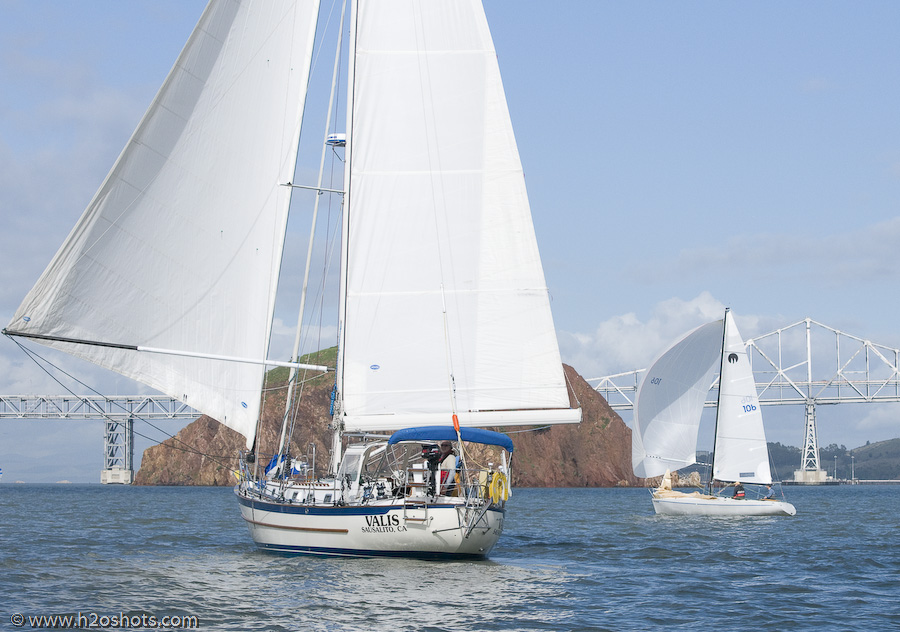 The January Three-Bridge Fiasco race. When I pulled the spinnaker out of the bag I discovered that a mouse had turned parts of the sail into a nest. So, we switched over to the telescoping whisker pole and went wing-and-wing. 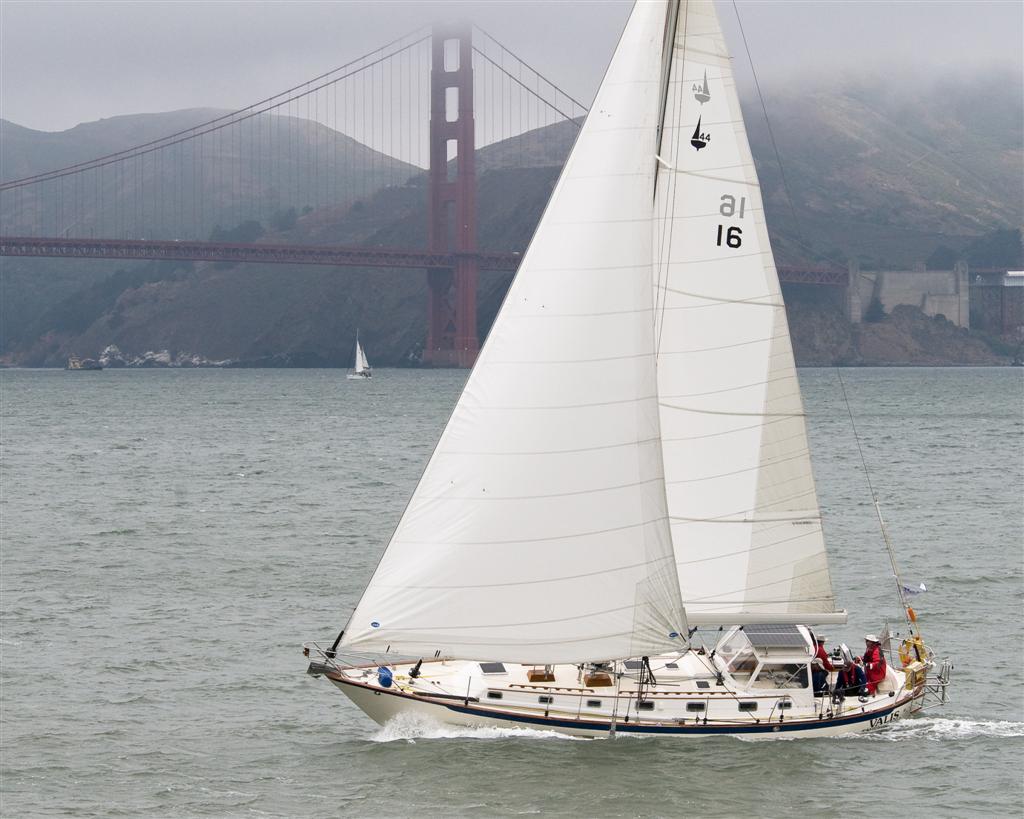 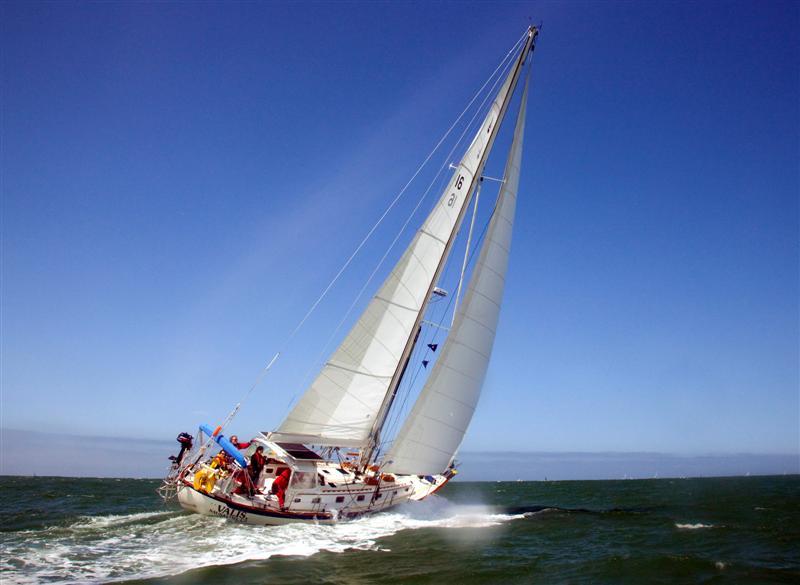 During the Crewed Farallones Race. We were pushing a lot of water! Notice our secret weapon on the stern rail -- fire up that outboard and the propeller turns us into an airplane! 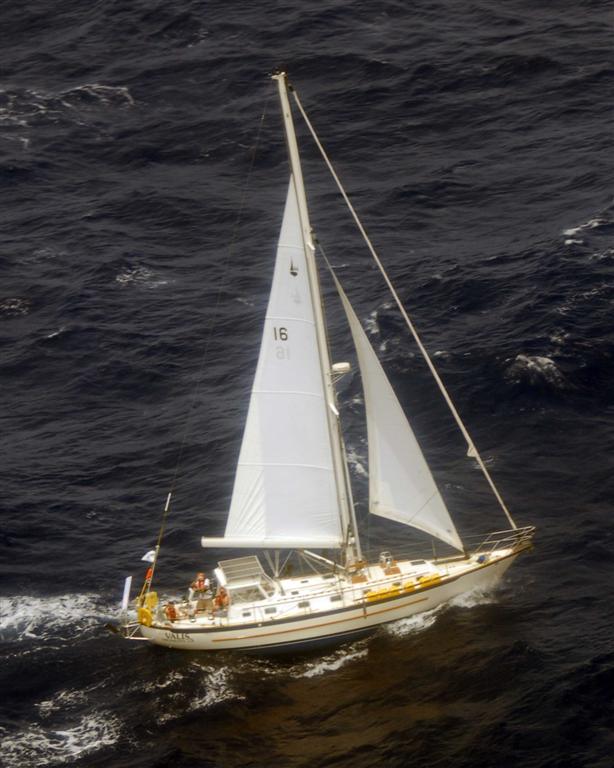 On the way home from Hawaii in heavy tradewinds. Photo taken by a friend in a big grey Orion P3. 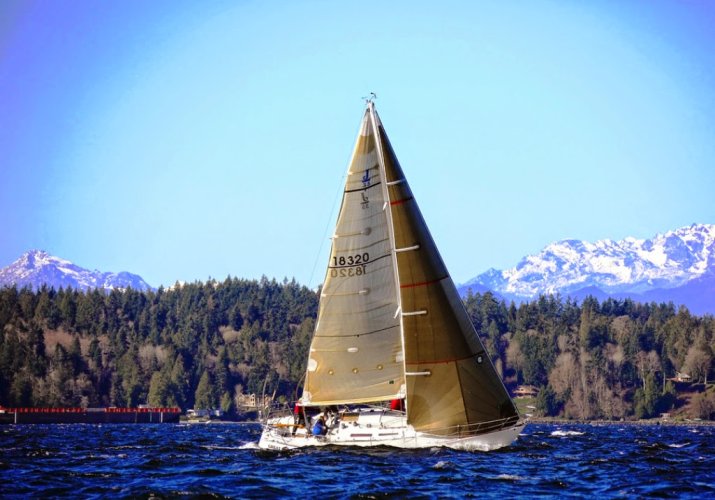 Last night, after removing half a foot of snow - the mighty Cal 20 (and classic sea foam-coloured Sportyak)is ready to go!

If all goes according to plan, she'll be the smallest boat ever to winter over in the Northwest Passage. 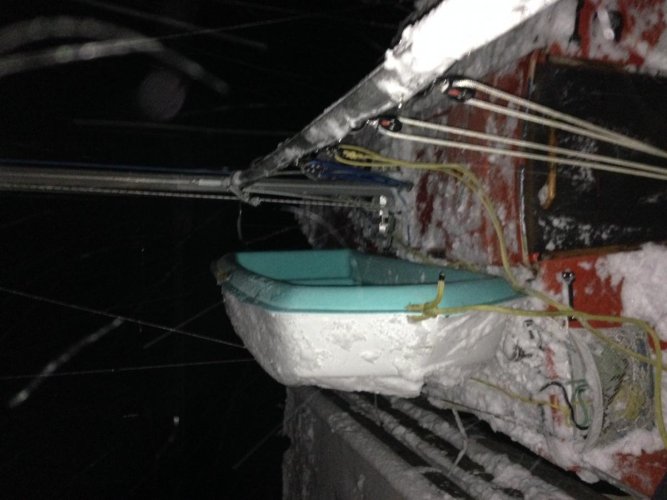 Great idea. I will have to get to work. 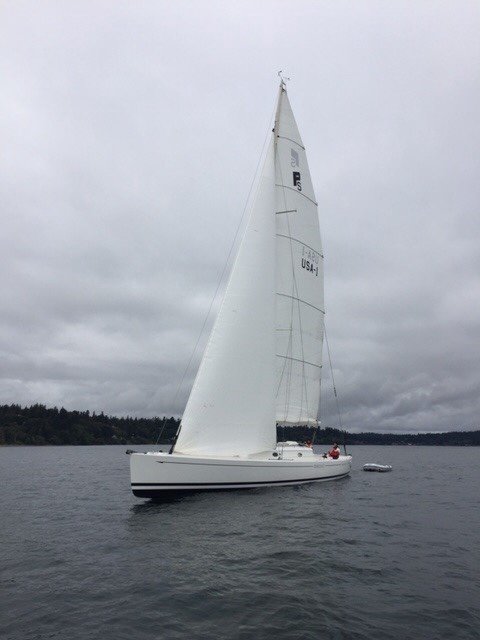 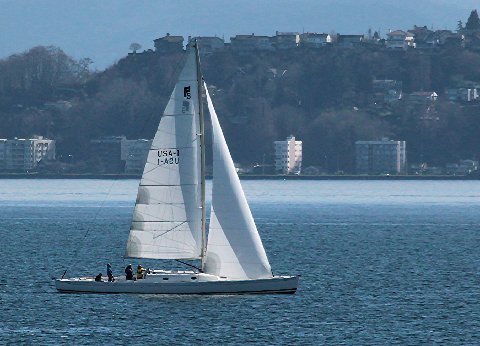 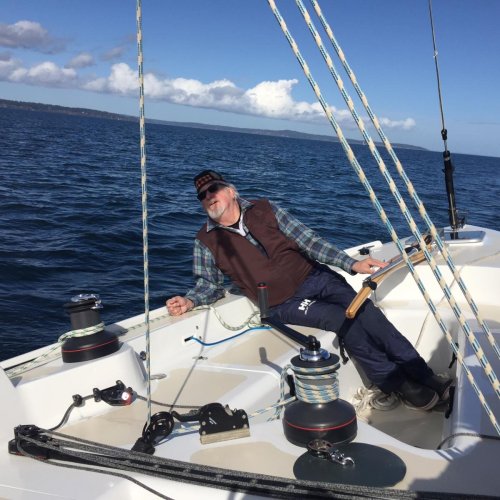 1981 Sonoma 30 - by Carl Schumacher, the crew aboard on the way to winning one of the last Pearl Harbor return races held, back in '99 or so - you can't sail past the Arizona Memorial anymore because of the new bridge and security, but we kicked ass that weekend. 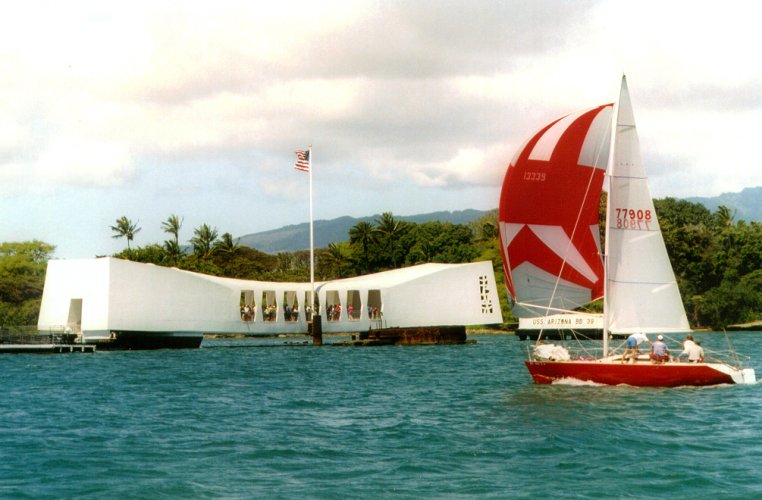 What a light touch on the tiller! I love boats that allow that. Sweet.

We're on the right, this is start of Round the County on Sunday (photo by Dennis Pearce)

Upwind, Sunday, Round the County 2016 (photo by Dennis Pearce)

First photo of our boat sailing with us on it, near Lopez Head, San Juan Islands (photo by Tom A)

In Maine before launch.

Light air..Fusion in the Big Lap charity race heading for the finish. July 2016. This is our eternal crew shot, could be anybody!

Medium air..Hamilton Island, August 2016. Props to Andrea Francolini for the photo. Coming up to the windward mark.

Those are gorgeous photos of a dream boat, Shaggy.

I'm going to wait until Dylan posts his.