some alternative news from the fp

some great points in here. a couple of my favorites: 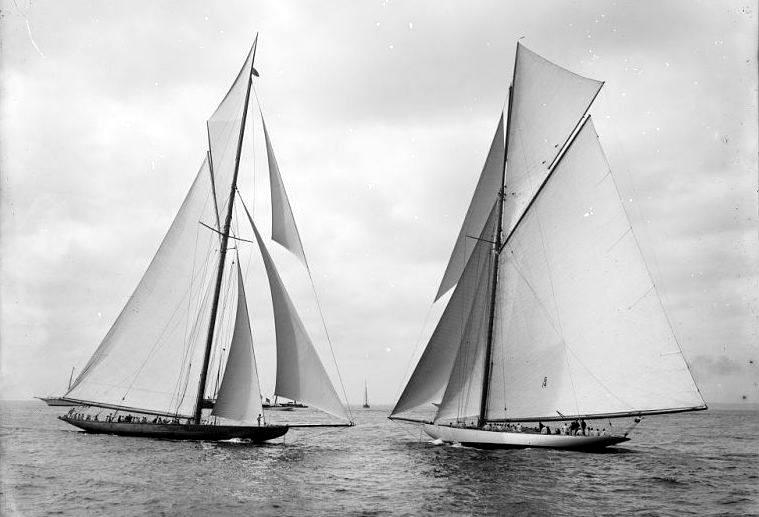 Yes, this was written just before the venue announcement, but it is about much more than that. ed.

OK, fair point. Having lambasted current America’s Cup rules and regulations as unhinged from the realities of the sport I should at least have the courage to propose some sensible alternatives. Challenge accepted.

First, let’s get a threshold pedantry out of the way. The “America’s Cup” is not named in honour of the Land of The Free. It is, in truth, a presumptuous invention. The cup itself – the “auld mug” – was originally the Royal Yacht Squadron £100 Cup.

But six years after the schooner America won that first challenge race around the Isle of White, the US syndicate, lead by George Lee Schuyler, donated the cup to the New York Yacht Club under a Deed of Gift, blithely re-naming it the “America’s Cup”.

That rather arrogant act of appropriation was not appreciated by the British. Forty years later their yachting magazines still insisted on naming the event the “America Cup”, with no possessive apostrophe “s” and the yacht’s name in italics. But I digress.

What is clear from the letter and spirit of the original 1857 Deed of Gift (and its subsequent amendments and additions) is that the Cup competition was meant to be a fair and balanced sporting contest that combined sailing skill with yacht design.

Easy to say, difficult to achieve. What the mid-19th Century lawyers who drafted the Deed failed to foresee was that technology would eventually come to dominate the event and relegate the sailors to a minor supporting role.

To my mind, that is the imbalance a revised America’s Cup must correct if it is to retain any relevance to the broader yachting community.

First, the boats. Swing-foil monomarans aren’t really boats at all; they’re more like low-flying aircraft. They can only attain their intended performance levels using stored power, and when their hulls are clear of the water.

There’s no doubt foiling is here to stay in some specialised classes but the vast majority of sailors still enjoy their sport in conventional centre-board dinghies and displacement yachts.

The event needs to be contested in craft that even your elderly maiden aunt would recognize as a “yacht”. Yet the AC elite has imposed such intensely tight class rules and regulations that there is now only limited opportunity for major design innovations or development from the swing-foil model.

Some of the key components are so complex that they must be supplied and are therefore common to all participants. Thus, the magic ingredients of creativity and flair – expressed so well through the design genius of Herreshoff, Watson, Fife, Nicholson, Burgess, Payne, Stephens, Lexcen and Farr – are largely lost.

What’s the solution? Well, there is much to commend a box (or sphere) rule with minimal restrictions, an LOA of around 80-90 feet, a mast (not wing) and single-skin sails, including spinnakers.

We would end up with a fast, attractive style of monohull that responds to a broad range of conditions and rewards good sailing. Upper limits on crew numbers and sail area, along with a minimum limit on displacement, would test the designers while delivering yachts that should be very close in performance.

To restore the contest to its sporting origins on-board technology would be limited to basic performance instrumentation: TWS, AWS, TWA, APA, boat speed and SOG. Tactical software and any ship-to-shore communications or data flow would be forbidden. There would be no use of stored power to trim sails, adjust rigging or move appendages. The boats would be sailed by human energy and skill alone.

Next, the nationality rules should be made simpler, and absolute.

The Deed of Gift describes the Cup as a “friendly competition between foreign countries”. The challenging and defending yachts should truly represent a nation, and be designed and made by those nations. Further, their crews should be citizens of those same nations (not just “residents” or “passport holders”). This seems an obvious reform to rekindle broader public interest in the event.

The current mode of AC sailing is so dangerous the crews need to wear crash helmets and survival vests, and so noisy that they must communicate through intercom. The racing itself should be returned to a format that corresponds with the open, visible style of competitive sailing understood and enjoyed by amateurs around the world.

The challenge series itself should be the best of seven or nine matches, one race per day of at least two hours elapsed time. This would not only provide an opportunity for yachts to recover from any early setbacks but also put a premium on the crucial sporting elements of stamina and sustained concentration.

All courses should include reaching, running and windward legs to guarantee a genuine test of crew-work. The pre-start period should be long enough – a minimum of five minutes – for the after-guards to engage in a substantial battle of tactics.

Finally, biddable venue choice should be taken out of the equation.

The defenders would be required to always stage the next Cup series in their own home waters. This would put an end to the grotesque situation where the defenders now attempt to shake down any city in the world prepared to waste hundreds of millions of their taxpayers’ dollars on the dubious honour of hosting a boat race.

In my submission, the cost for intending syndicates to compete in a reformed Cup along these proposed lines would be a fraction of the outrageous $200m budgets required today. This would have the welcome effect of removing the need for the current extremes of crass commercialism that blight the event.

We might even see the end of the sponsor’s logos and advertising on hulls, spars and sails. If the Liptons, Sopwiths, Vanderbilts and Bonds were happy to fund their challenges and defenses without turning the Cup into a marketing opportunity, why do the equally wealthy moguls behind Prada, Rolex and Emirates feel the need to exploit their boats as billboards?

In summary: surely it’s time for us to stand back and make a dispassionate assessment of what the America’s Cup has been allowed to become. We are forever being told it is the absolute “pinnacle” of sailing, yet today it is a frantic made-for-TV, short-attention-span scramble utterly at odds with the fundamental principles of the sport.

That may be all well and good for the hired gunslingers of SailGP, but not for a unique competition we’ve treasured for the past 170 years.

Minor point but it was the 100 Guinea Cup (21 shillings with 20 shillings in the pound). 100 pounds would be considered a trifle crass in those days.

chesirecat said:
Minor point but it was the 100 Guinea Cup (21 shillings with 20 shillings in the pound). 100 pounds would be considered a trifle crass in those days.
Click to expand...

You are like many who think they know better than what's real, those who have actually handled the cup know that "100 pound cup" is engraved on the cup it's self.

I like rooting for the home team, spinnakers, and monohulls, but who's to say that the America's Cup should be run for sailors of my ilk or any other?

Terry Hollis said:
You are like many who think they know better than what's real, those who have actually handled the cup know that "100 pound cup" is engraved on the cup it's self.
Click to expand...

You are like many who think they know better. Whilst it might be engraved as such, it was known as the Queens Cup and at the time was associated with the guinea even though it was no longer in circulation. It was used until relatively recently  in legal matters and wagers, I've even done a deal with a guinea which was honoured. They couldn't hand over guineas to foreigners, so it had to be pounds. A wager in  pounds would be ungentlemanly so thereby hangs another tale.

To settle this, I thought I'd break out Bob Fisher's tome. The photo on p20 is captioned "the 100 pound cup".

The Cup originally belonged to the RYS and https://www.rys.org.uk/yachting/americas-cup describes it as the £100 cup.

I was hoping the Garrard &amp; Co website would have something to say on the subject but it does not.

The Cup is an ornate sterling silver bottomless ewer crafted in 1848 by Garrard &amp; Co.[11] Henry William Paget, 1st Marquess of Anglesey bought one and donated it for the Royal Yacht Squadron's 1851 Annual Regatta around the Isle of Wight. It was originally known as the "R.Y.S. £100 Cup", standing for a cup of a hundred GB Pounds or "sovereigns" in value. The cup was subsequently mistakenly engraved[12] as the "100 Guinea Cup" by the America syndicate, but was also referred to as the "Queen's Cup" (a guinea is an old monetary unit of one pound and one shilling, now £1.05).

If you follow that link [12] you get to https://archive.org/details/lawsonhistoryofa00thomrich/page/374/mode/2up?view=theater which is an early transcription of engravings on the Cup and if you zoom in (a lot) you can see it was indeed engraved 100 Guinea Cup.

So the Brits called it the £100 cup but the Americans decided it was 100 Guinea.

lol. fuck. a pound is a sovereign. but a guinea is a 'bakers dozen' of shillings. that is twenty shillings to a pound - plus one. omfg.

so yes. my sympathies with the Americans engraving the cup. but maybe this - call it a Guinea - was just a little early marketing. bump it up a little.

floater said:
lol. fuck. a pound is a sovereign. but a guinea is a 'bakers dozen' of shillings. that is twenty shillings to a pound - plus one. omfg.
Click to expand...

Does the currency 'pound' have 'weight' origins?

chesirecat said:
Minor point but it was the 100 Guinea Cup (21 shillings with 20 shillings in the pound). 100 pounds would be considered a trifle crass in those days.


Terry Hollis said:
You are like many who think they know better than what's real, those who have actually handled the cup know that "100 pound cup" is engraved on the cup it's self.
Click to expand...

Who gives a FUCK, anything on the tele is supposed to be entertaining.


Marty Gingras said:
I like rooting for the home team, spinnakers, and monohulls, but who's to say that the America's Cup should be run for sailors of my ilk or any other?
Click to expand...

As much as many of us wish it going back to an older format of crews and sail changes, It probably ain't gonna happen.

Stingray~ said:
Does the currency 'pound' have 'weight' origins?
Click to expand...

Supposedly at one time of value equivalent to a pound of silver. https://www.bbc.co.uk/news/uk-politics-26169070

And the Guinea, originally a gold coin. https://en.wikipedia.org/wiki/Guinea_(coin)