Some of my old sailing photos 2

Hero is still in really good shape, sails and instruments are outdated but hull, rig engine etc is well kept. 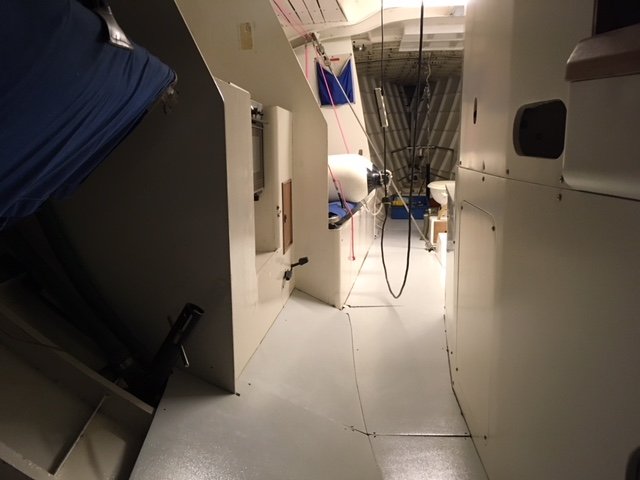 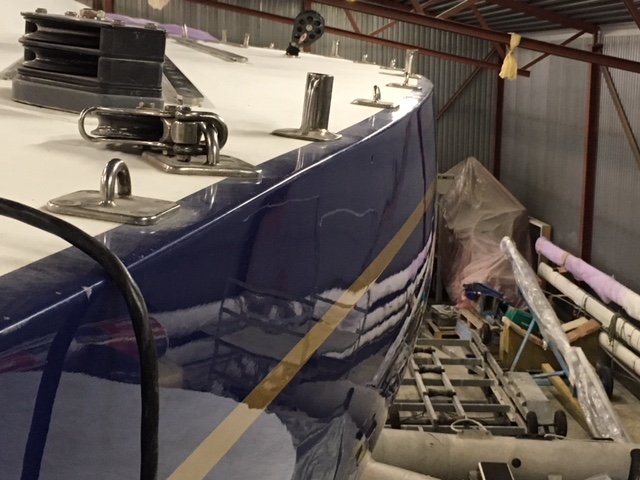 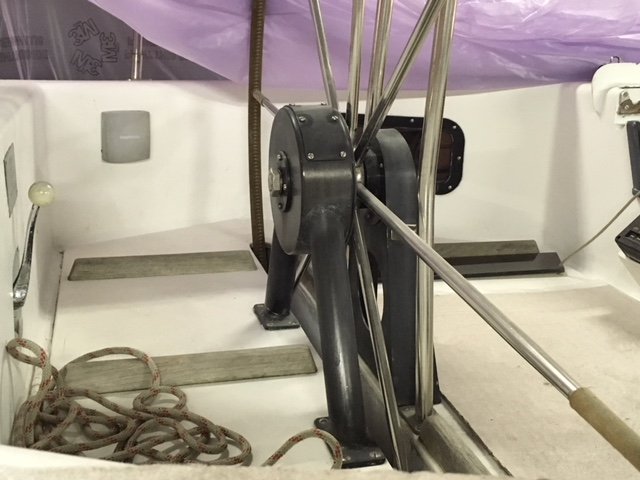 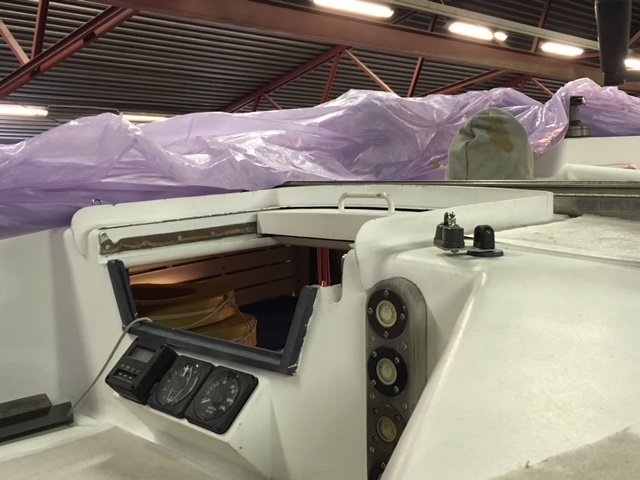 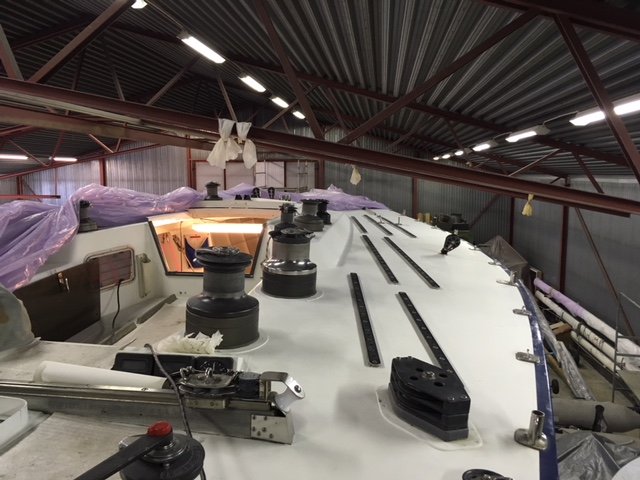 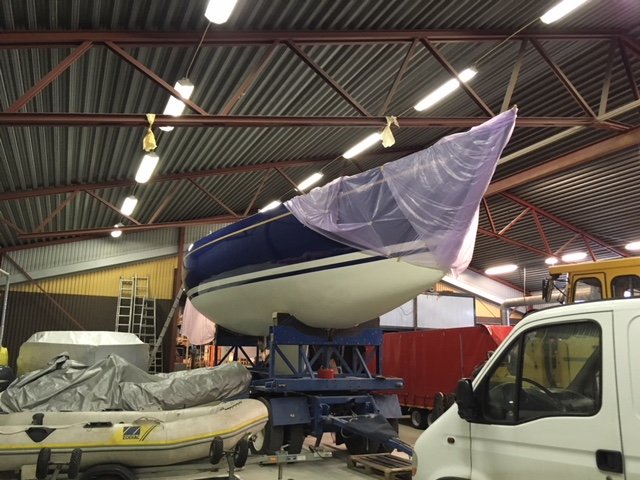 Sure, he store her two rigs as well and other boats. The Stearn mast is newly painted and the 4 spreader Sparcraft is in need for some TLC. She has been on the hard for two soon three years and will not move again until sold. I believe she is pretty original.

Great photos, bring back great memories! Everyone talks of 79 Fastnet, but 85 was much worse. Only, we started with 40 knots on the nose, so about two thirds of the fleet retired before Start Point. Only 3 AC teams got all 3 boats home, Germany, Australia and us Irish. After our rudder quadrant failure and retirement in the also breezy Channel Race, we had to come back fighting. Boat leaked through every deck fitting. About 100 gallons removed several times per day. Just fitted obligatory SSB was cocked up by Nudger's oppo, so screwed the alternator and starter motor. No power by Lands End. Heroic effort by Burke Corbett, farmer from Wexford, to start the engine, upwind in 50 knots, rocker cover off, manual decompress by a bunch of us with screwdrivers and string, batteries in series, to no avail. Followed my nose, found the rock, had a chat with a Dutch warship with the last of our handheld VHF battery on the way down, so the world knew we weren't lost .... Crew shot to pieces. Wattie's battery ran out at the Bishop, leaving 2 or 3 of us functioning. Scary beam reach under 3 reefs and #5 with no instruments, no electronic nav, horizontal rain ... Poor owner thought we were about to die, and lost it totally. Conditions were not nice, mast in the water a bunch of times that final night. Zombies disembarked in Plymouth, bumping into things. I could not sleep more than 30 minutes for 2 weeks. Only slept about 4 times that during the race. 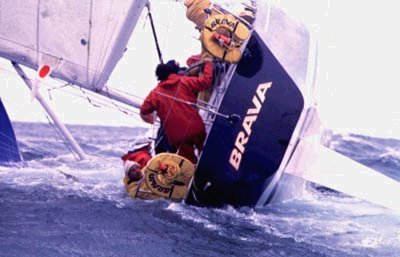 Ah remember when we had a winch for every string!  And a different jib track for every time someone thought we were slow.

That Pasquale looks like he swallowed the courage of 8 men in that shot!

FinnFish said:
Being on the younger side could a knowledgeable old timer explain the jib tack being on tracks(?).
Click to expand...

That white foresail is not the jib, but a Tall Boy spinnaker staysail.

Found this photo from '89 Southern Cross. 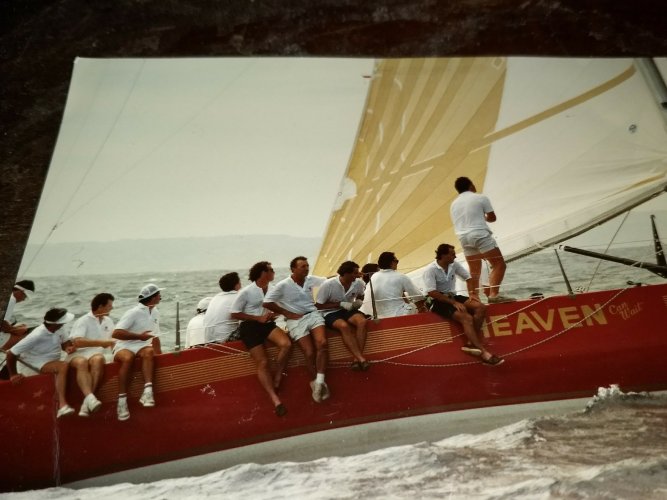 Great Pic of Brava w/ John Marshall at the wheel, I am sure he is saying "No Problem, I got it"...

Me Pushing out the Main after hoisting the Kite in about 2 seconds....

And Vicki (gary's ex) in the bow

And yes that is one of those early light weight Mylar kites, we called a "Quivering Cell" because in anything other than flat water they quivered and were not fun to trim or very fast.
Click to expand...

Hey Gary, was that "Mas Rapido"?

Zerodegrees said:
Are we sure it's not Newbury Park, CA?  Last time I saw the boat was up in Vallejo, CA 2012?
Click to expand...

Zerodegrees said:
Are we sure it's not Newbury Park, CA?  Last time I saw the boat was up in Vallejo, CA 2012?
Click to expand... 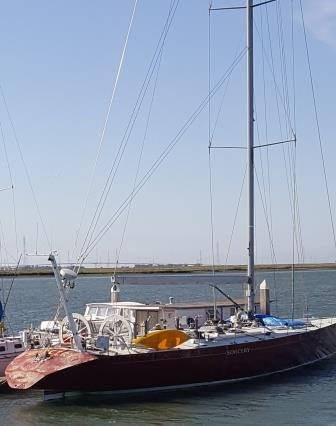 A soggy rock in the atlantic

Some video of Sorcery from 1996 at 2minutes. Quality isn't great

Is this thread still alive? If so, I wonder if anyone has any photos of Silver Fox, a C&C 3/4 ton sailing in SORC 1983? (The C&C 3/4 tons had a '33 hull with a custom deck: twin foredeck hatches with a trench in the cabin for the spin pole.)
Amazing thread. Brings back lots of memories.

newbury said:
Is this thread still alive? If so, I wonder if anyone has any photos of Silver Fox, a C&C 3/4 ton sailing in SORC 1983? (The C&C 3/4 tons had a '33 hull with a custom deck: twin foredeck hatches with a trench in the cabin for the spin pole.)
Amazing thread. Brings back lots of memories.
Click to expand...

No, but I have photos of a Farr 3/4 tonner that is slowly going to the knacker.
L

cill123 said:
Some video of Sorcery from 1996 at 2minutes. Quality isn't great