Every year the Southampton Solent University runs a model yacht competition between the first year yacht design students that involves designing, building and racing boats that have to comply to a meter type design rule. This is a very big deal in the course and represents 60 percent of my grade for two different classes this year.

You can see the article for this year's race here: http://official.blog.solent.ac.uk/press-releases/spain-take-the-title-in-universitys-annual-model-yacht-race/

My boat ended up making it to the semi-finals in the competition and I thought there might be some people in the CA community who would be interested in hearing about the design and build of the boat.

I put up a photo here that shows one of the more unusual elements of the design.

If there is interest I can post some pictures and renderings and talk about the boat. 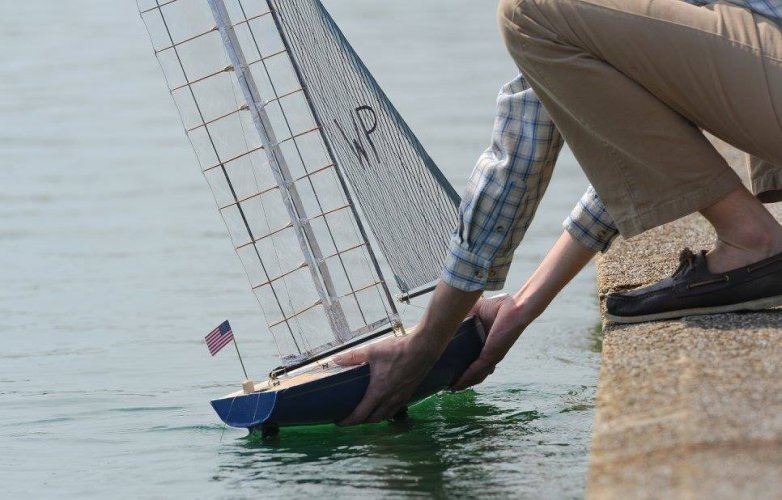 Heck yeah there is interest Will!

Okay, I'll start with the disappointing facts first. Unfortunately university policy does not allow me to share my lines or CAD drawings on the internet but I have been given permission to post photos and renderings.

My design was one of the most unusual in the race because it had a wing sail (which took an extra 100 hours to build). It also is one of the only that use modular construction (think structure module like Francis Lee) and 3D printed parts. In addition, my boat was the only one designed entirely in 3D using Rhino because we're not supposed to learn how to use that software until year 2.

My idea for that was to make the boat sail better upwind as that's where all the points in the races are. It worked very well, apparently combining a skinny monohull with a wing gives good pointing ability. My boat sailed almost into the wind, the first race I started on the leeward side of the start line and finished first to weather of all the other boats. When I was testing the boat I had problems with it sailing so high the jib would collapse but the boat would keep going in a straight line into the wind. I think most of the time the wing was doing all of the work. You can see how high she was sailing in the photo below (relative to the ripples in the lake).

I've got tons of construction photos and renderings, if anyone wants to see them just ask.

Did you try sailing without the jib and did the jib make any difference?

Without the jib it was very finniky and tough to balance. I ended up just easing the wing out a little to satisfy the jib.

Post everything you do Will. We are watching you.

probably because you designed it with the jib. therefore placing the CoE not in the optimal place for if you only want to use the wing. Interesting!!

JMOD: With all due respect ( I don't know you so I have no idea how much respect that is but it sounds right) I do not think it is quite as simple as that.

JMOD said:
probably because you designed it with the jib. therefore placing the CoE not in the optimal place for if you only want to use the wing. Interesting!!

The rig has 18 different positions, so center of effort in the rig is not an issue. The boat was designed to reef easily. So the jib and upper 37 cm of the wing can be removed.

This is awesome! You are so right to take advantage of this time to try new things, investigate ideas, and explore methods. Exactly what school should be for.

The wing sail is really interesting. Will have to read up on those. If you feel like talking about the process that lead you to choosing different aspects of the design, I for one would be super interested.

We have a IOM stashed away on our boat and have cocktail races in the anchorage when there is a breeze.

All forms of moving boats with wind are great opportunities to mess about.

Will, did you offer to send more pics?

I would like to see them, particularly technical ones.

Very cool, Will. You do good work.

olaf hart said:
Will, did you offer to send more pics?

I could be wrong, but he just finished his last exam of the year a few hours ago. So there's a non-zero chance he's off having a cold one with his mates and may be done posting for the night (it's about midnight there in Southampton)...

I suspect he will post more tomorrow. He's hanging around the UK until the 31st, moving out of his room etc., so he'll have some time. I have a few pictures I can put up in the mean time if you guys want.

I'd rather wait and let him spin it though; his story, not mine.

Would be interesting to hear thoughts about the course, Soton etc.

Great job Will! Looking forward to more information and pictures.

OK, I can't help myself. Proud dad and all that crap, but here's a teaser to hold you until he gets out of bed in a couple of hours.

Here's where the center of effort (is that the right term??) is. Parental note: he has acquired both a shave and a haircut since this picture was taken. 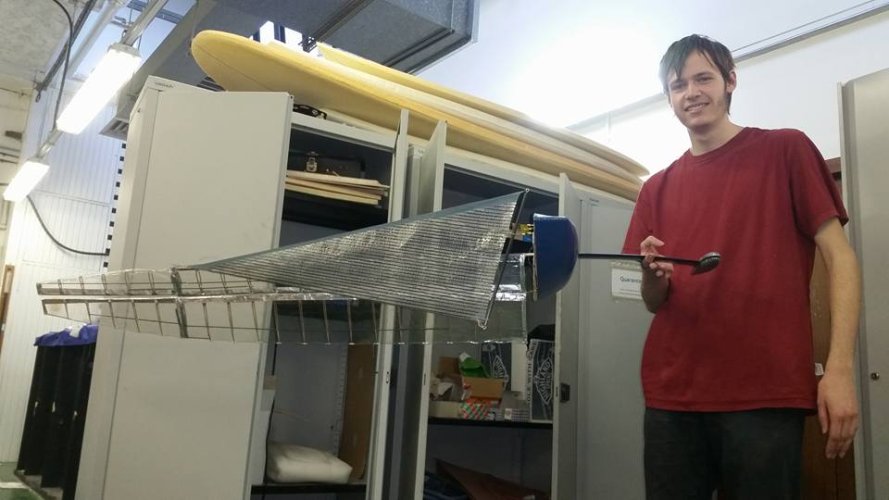