Funny in this day and age to see them using 1980 methods to hang a rig and look at shape and systems like we had done for years in Tornados and DNs....

DHFiend said:
Couple of good pics out on the AM FB on the mast rotation and 2x skin shaping.... Spent a lot of my younger sailmaking years looking at rig and sail combinations like in the bottom pic - total bitch to set them up right.
Click to expand...

Interesting that in the Mule pics, the mast isn't rotated, since that changes the shape of the sail.

Weird to look at a rotating mast and see the spreaders be straight.  Also seems like a lot of rotation given the depth of the chord and apparent wind angle.

^ Airbus did work for LE’s Cup-winner in AC34 too.

Stingray~ said:
^ Airbus did work for LE’s Cup-winner in AC34 too.
Click to expand...

It talk them several races to release the Normal Law firmware update though eh ;-)

Hey, so this thread’s gone stale. Where’s the boat?!

Gone back into the shed to fit a deck sweeping main, remove the cables from the aft deck, recess their headsail tracks and rethink their traveller system?


Could you quit Spamming the tread?  We know your infatuation, but please stop posting spam.

New York, N.Y. - Advanced Wing Systems (AWS) and New York Yacht Club American Magic, U.S. Challenger for the 36th America’s Cup, today announced that AWS, a leader in sail design and engineering, has been named as an Official Supplier of the team. AWS has assisted American Magic in incorporating the latest in soft wing sail technology into the team’s 38-foot test boat, the Mule. 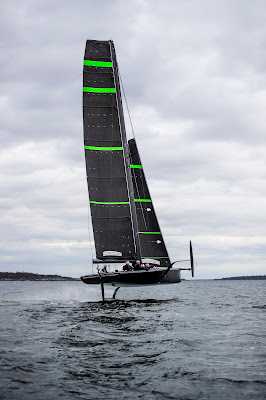 “Advanced Wing Systems has given American Magic a boost in the early stages of our campaign for the 36th America’s Cup,” said Terry Hutchinson (Annapolis, Md.), Skipper and Executive Director of American Magic. “We are excited to have their experience and intellectual property as we move forward with our wing sail design effort.”

Founded in 2012, Advanced Wing Systems was an early leader in the concept of “soft wing” sails, which deliver many of the performance benefits of the rigid wing sails used in previous America’s Cup matches, but with fewer operational and logistical difficulties.

“We are keen to be involved with American Magic because while we have been testing this concept for some time, an America’s Cup team offers us an unmatched opportunity to innovate and push sail technology forward,” said Greg Johnston of AWS. “American Magic operates at the pinnacle of sailing, and we are very proud to support the team.”

The Advanced Wing Systems Semi Rigid Wing (SRW) sail is the optimum combination of performance and practicality. It is the result of extensive research, modeling and practical testing.  It provides a practical combination of aerodynamic performance and robustness in design. The AWS system is suited to almost any sized yacht, from off the beach craft to super yachts. The simple and robust design means it can withstand the rigors of ocean sailing and racing. http://www.advancedwingsystems.com

Formed in October 2017 by Bella Mente Racing, Quantum Racing and the New York Yacht Club, NYYC American Magic brings together two highly successful racing programs with one of the foremost yacht clubs in the world, all with the shared vision of launching a campaign for the 36th America's Cup competition, reconnecting the American sailing base with sailing's premier event and elevating the quality of competitive sailing in the United States. The syndicate intends to develop and support a team that will participate in the America's Cup competition and the Challenger Selection Series competitions that lead up to it.
American Magic’s Official Innovation Partner is Airbus. The Official Apparel Sponsor of American Magic is Helly Hansen. American Magic is a recognized 501(c)(3) nonprofit organization. www.americanmagic.com 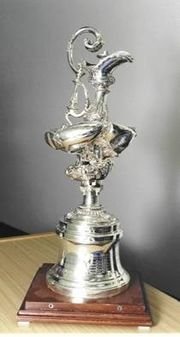 Gone back into the shed to fit a deck sweeping main, remove the cables from the aft deck, recess their headsail tracks and rethink their traveller system?
Click to expand...

This was taken yesterday...Defiant quietly ripping along, doing work. 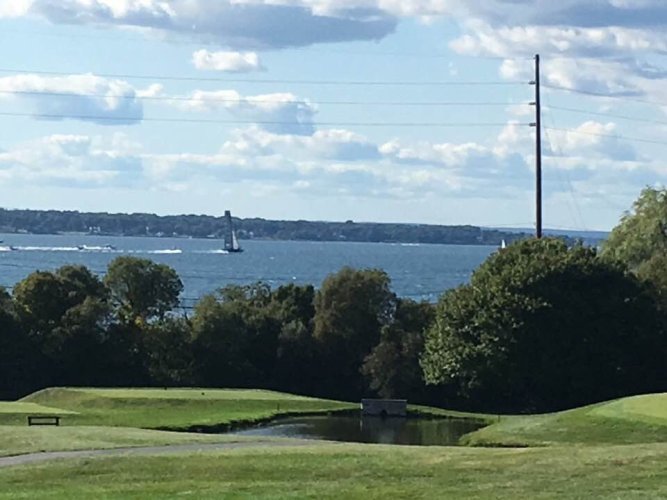 Herfy said:
Could you quit Spamming the tread?  We know your infatuation, but please stop posting spam.
Click to expand...

And 6 posts by spinbot aren't spam?