San Antonio gynecologist Alan Braid, whose abortion clinics joined the other plaintiffs in Whole Woman's Health v. Jackson, could trigger such a case by revealing that he deliberately violated S.B. 8. "On the morning of Sept. 6," he writes in a Washington Post opinion piece published on Saturday, "I provided an abortion to a woman who, though still in her first trimester, was beyond the state's new limit. I acted because I had a duty of care to this patient, as I do for all patients, and because she has a fundamental right to receive this care. I fully understood that there could be legal consequences—but I wanted to make sure that Texas didn't get away with its bid to prevent this blatantly unconstitutional law from being tested."

When the Court declined to intervene in Whole Woman's Health v. Jackson earlier this month, it cited the "complex and novel antecedent procedural questions" that the 5th Circuit later addressed. But once a private party sues Braid, the constitutional issues raised by S.B. 8 will be unavoidable. The only way to uphold the law will be to renounce Roe v. Wade and its progeny. Although most of the current justices seem to disagree with those precedents, that does not necessarily mean they are prepared to abandon half a century of jurisprudence, along with all the expectations built on it, in one fell swoop.

Update: Oscar Stilley, who describes himself as a "disbarred and disgraced former Arkansas lawyer," filed an S.B. 8 complaint against Braid on Monday in Bexar County, which includes San Antonio. Stilley, who is serving a 15-year federal sentence for tax fraud that he received in 2010, told The Washington Post his interest had been piqued by the $10,000 bounty and news coverage of Braid's stance. Stilley said he is not opposed to abortion but thought the law should be tested in court. "If the law is no good," he said, "why should we have to go through a long, drawn-out process to find out if it's garbage?"
Click to expand...

And opportunistic inmates, of course. Sorry as usual about the Koch-$pon$ored TeamR cheerleading.

All of the parties to these lawsuits, in other words, seem to think enforcement of S.B. 8 should be blocked. That situation dismays Chelsey Youman, Texas state director and national legislative adviser for Human Coalition, an anti-abortion group based in Frisco. "These out-of-state suits are not what the bill is intended for," Youman told The New York Times, which notes that her organization "said it had no plans to file a lawsuit" against Braid "or to encourage others to do so." Youman "speculated that the lawsuits were 'plants,' and she portrayed Dr. Braid's opinion essay as an attempt to bait a frivolous suit that would challenge the law's constitutionality in court."

Texas Right to Life also argues that the Stilley and Gomez lawsuits are improper. "Texas Right to Life is suspicious that Braid's op-ed is purely a legal and publicity ploy," it says. "The abortion industry's 16 previous efforts failed to stop this law from saving lives so far, and this may be another attempt….Neither of these lawsuits are valid attempts to save innocent human lives. Both cases are self-serving legal stunts, abusing the cause of action created in the Texas Heartbeat Act for their own purposes."

Contrary to the implication, S.B. 8 does not require that plaintiffs be motivated by a desire to "save innocent human lives." Its description of potential plaintiffs—"any person"—could not be broader. Private civil lawsuits ordinarily seek to vindicate the plaintiff's rights and compensate him for an injury. By eliminating any such requirement and embracing legal tricks that conservatives have long condemned, S.B. 8 invited just the sort of gamesmanship that offends Human Coalition and Texas Right to Life.

Excoded Tom said:
Hah! Turns out that "any person" means "any person."


Sorry as usual about the Koch-$pon$ored TeamR cheerleading.
Click to expand...

If you're "Sorry" why do you keep posting them?

Mrleft8 said:
If you're "Sorry" why do you keep posting them?
Click to expand...

I'm posting as usual and also sorry as usual.

People seem to object to certain media sources with clean fact check records, but never say why. It's a mystery. Similarly, my desire to spread factual TeamR cheerleading in spite of the objections is another mystery.

Mrleft8 said:
If you're "Sorry" why do you keep posting them?
Click to expand...

He thinks he's being cute and funny.

But, he's just a pedantic ass who gets off on luring you down one of his rabbit holes.  Once you engage with him, he'll bury with links to his own posts and challenge you to defend yourself.  He must have one helluva spreadsheet to keep all of these "gotcha" opportunities straight.

Mike G said:
Jesus Christ on a pogo stick. And he says it with a straight face like he truly believes the shit he is peddling.
Click to expand... 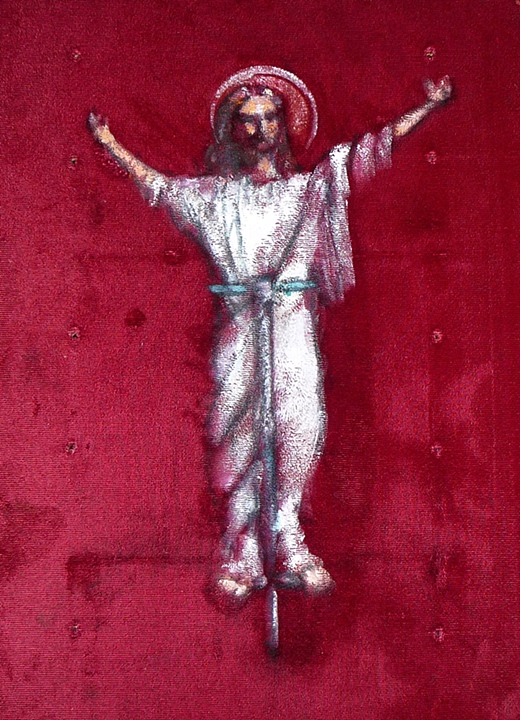 Burning Man said:
No, I disagree.  I'd be interested to see where the religious aspect of this comes into play.  IIRC from sunday school growing up, there was a lot of smiting and smoting and bashing the first born babies heads in against walls and all kinds of fun &amp; games.  So curious where abortion comes in.

Speaking of which, I never understood the religious objection of vaccines either.  Maybe you guys could do a twofer explano......
Click to expand...

The Catholics have always been against abortions, along with birth control.  Probably a combination of growing a base of believers (recall that Rome allowed women that had three living children to control their own property) and enforcing conformity to "God's Will".  Robert P. Jones (PRII.org) asserts that during the '70's Catholics joined forces with the conservative Evangelicals to get into politics with abortion being the price the Evangelicals paid.

A US federal judge temporarily blocked a near-total ban on abortion in Texas, the toughest such law in the United States, following a challenge from President Joe Biden's administration after the US Supreme Court let it proceed.


The action by US District Judge Robert Pitman in Austin prevents the state from enforcing the Republican-backed law, which prohibits women from obtaining an abortion after six weeks of pregnancy, while litigation over its legality continues.

The case is part of a fierce legal battle over abortion access in the United States, with numerous states pursuing restrictions.

"This court will not sanction one more day of this offensive deprivation of such an important right," Judge Pitman said in his ruling.

The ink was barely dry on Judge Pitman's order before Texas notified the court that it intended to appeal the ruling to the conservative-leaning Fifth Circuit Court of Appeals, setting the stage for the next phase of the legal battle.

"Tonight's ruling is an important step forward toward restoring the constitutional rights of women across the state of Texas," White House press secretary Jen Psaki said in a statement late on Wednesday.

"The fight has only just begun, both in Texas and in many states across this country where women's rights are currently under attack," she added.

udge Pitman heard about three hours of arguments for the Justice Department's request.

Justice Department attorney Brian Netter called the law an "unprecedented scheme of vigilante justice" that must be struck down. 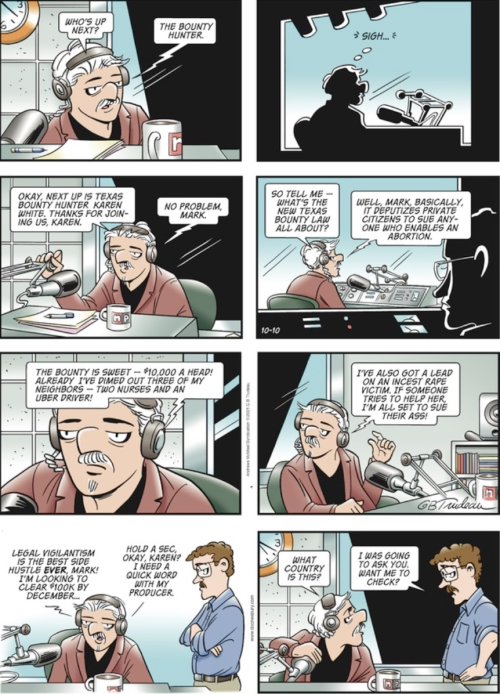 ShortForBob said:
Justice Department attorney Brian Netter called the law an "unprecedented scheme of vigilante justice" that must be struck down.
Click to expand...

That's not quite true, as I noted in this thread last month. If you missed it, "vigilante justice" of this kind is hardly unprecedented and only sometimes bad.

To be clear, the problem here is not simply that Texas is using private law suits as an enforcement mechanism. Many laws—including many supported by the political left—rely heavily on enforcement by private litigants. That is true of numerous environmental regulations, consumer protection laws, and land-use restrictions, among others. California's notorious CEQA statute empowers NIMBYs (who in that state tend to be left-wing) to use private litigation to block new housing construction and other development. This exacerbates that state's serious housing shortage, and even leading to such absurd outcomes as a court ordering UC Berkeley to freeze enrollment.

Thus, condemnations of SB 8 for empowering private "vigilantes" are off-base, unless you also disapprove of the many other laws that  use private litigants as enforcers. I'm old enough to remember when conservatives denounced environmental and civil rights laws that utilized "private attorneys general," while many on the left defended them as essential regulatory tools. On both right and left, attitudes towards the use of private litigation as an enforcement mechanism often depend on whose ox is being gored.

The troubling aspect of SB 8 is not the use of private enforcement, as such, but the resort to it as a mechanism for evading judicial review.

Excoded Tom said:
That's not quite true, as I noted in this thread last month. If you missed it, "vigilante justice" of this kind is hardly unprecedented and only sometimes bad.

Thoughts on the Supreme Court's Texas Abortion Ruling—and How to Prevent it From Setting a Dangerous Precedent
Click to expand...

Why? You obviously didn't read it the first time. Want to not read it again? Here ya go.

ShortForBob said:
The action by US District Judge Robert Pitman in Austin prevents the state from enforcing the Republican-backed law, which prohibits women from obtaining an abortion after six weeks of pregnancy, while litigation over its legality continues.
Click to expand...

The catch is, Despite the Injunction Against the Texas Abortion Ban, Clinics That Resume Their Usual Services Could Face 'Crippling Liability'

Among other things, it says defendants cannot rely on a court's determination that the statute is unconstitutional if that ruling is later overturned—even if that did not happen until after the conduct that gave rise to the lawsuit. In other words, Texas clinics that perform prohibited abortions now cannot cite Pitman's ruling as a defense if the 5th Circuit overrules him, as seems likely.

For the time being, Pitman's injunction bars Texas courts from hearing lawsuits authorized by S.B. 8. But that will no longer be true if the 5th Circuit stays his injunction, as the state is asking it to do.

What happens then? If people are sued because of abortions performed before the 5th Circuit responds to the state's appeal, you might think, they could argue that they acted in good-faith reliance on a federal judge's conclusion that S.B. 8 is unconstitutional. But the law explicitly forecloses that possibility.

Excoded Tom said:
The catch is, Despite the Injunction Against the Texas Abortion Ban, Clinics That Resume Their Usual Services Could Face 'Crippling Liability'

In other words, the law is brilliantly evil.

Rain Man said:
In other words, the law is brilliantly evil.
Click to expand...

I wouldn't call brilliant and evil in the same sentence. Cunningly, disgustingly, maybe. Whoever came up with it should be consumed by giant crotch crabs forever.

Rain Man said:
In other words, the law is brilliantly evil.
Click to expand...

I think so, but it has its fans who want to reinforce and expand on this plan. For example:


Raz'r said:
Only right that guns go away in liberal states. Might as well use the same technique.
Click to expand...