Three men were found dead on the street in Bangkok yesterday (Tuesday), one of them posthumously tested positive for COVID-19, according to rescue workers. 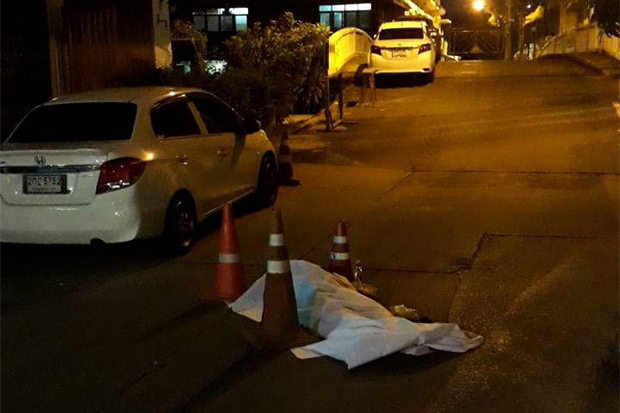 A dead man lies in the middle of the road, covered by a sheet, hours after he died, on Soi Ban Phanthom, off Phra Sumeru Road, in Phra Nakhon district of Bangkok on Tuesday night. (Photo from Phuri Phatara Facebook account)


The rapidly spreading Delta variant of COVID-19 has already overtaken the Alpha variant as the dominant strain in Thailand, with Delta accounting for 62.6% of 3,340 samples examined by the Medical Sciences Department, compared to 34.1% of Alpha cases.

1.5 million more Thais fell into poverty in 2020, over 5 million now living under the poverty line

Up to 1.5 million Thais fell below the poverty line in 2020 with the country’s economy contracting from effects of the pandemic, the World Bank said Thursday, emphasizing the importance of continued support for the poor.

The newly released figures shows that over 5 million people nationwide now live below the poverty line of USD $5.50 per day.

we are really struggling after doing so well last year.  Speaking on the ground this is what has changed:

2020: first country to be infected outside of China along with huge Chinese tourism back then including from Wuhan came right after PM2.5 pollution so everyone was already masked up for the most part; masks are a normal part of life here when sick, with pollution etc.  Govt had a strong shutdown early on and that stopped the infection rate quickly albeit at massive damage to the tourism/SME/informal economy.  Minor flair up in Dec and again in Feb but pretty much infection rates were very low, life locally similar to NZ since Jul 2020 with nightlife reopening in around Nov 2020; restrictions on tourism and masks stayed in force throughout; Thai people are generally pretty hygenic and used to handling tropical diseases; COVID never really infiltrated the poor high density urban communities.  Some degree of belief that there might be some special sauce or prior infection meant life was back to normal and govt was pretty slow at securing supplies of vaccine - 'we're doing well' was the mindset until around Q1 2021. Infections rates in the 0-100 type range daily.

2021: things changed in early April: rich tourists and returning Thais and illegal migration plus Delta plus nightlife open especially for wealthy with dance parties etc lit a slow burning fuse with super spreader events, prisons infections, small infections fast growing thanks to Delta in clusters such as a fish market, worker construction camps and then into the poorer communities. Poor choice by govt to allow new year travel (april) right at the time of the fuse lit, resulting in spreading to other provinces from BKK. Much more testing and vaccination now underway (as of today around 20% of population has at least 1 dose) but over reliance on Sinovac and slight delay in AZ roll out meant that May/June were the start of the beginning of what we see now.

Today.  Almost 20,000 infections daily; 100-150 deaths daily, hospitals are now full.  Private sector is leading the way with vaccine centres, field hospitals etc.  The govt is probably stuck 'too little too late' in terms of shutdown - decisions to close large sectors of the economy are slowing the spread with WFH, malls shut, night life shut, curfews, etc - but poor people here are taking it hard since they are high density and spreading it in families and communities.  It will get worse before it gets better.  Next month is critical.  Delta is spread a lot more easily and Sinovac is now appearing less effective for that variant also.  Masks everywhere, people cleaning everything all the time, and life goes on, but it's a lot harder and more isolated than before.

As always is the case here, the rich people have shunted the problem onto the poor, who now bear the suffering for it and can't enjoy the fancy private hospital sector treatment or social isolation in big 5 bedroom houses with 2 people, a maid and a pet cockapoo.   We'll get through it.

As someone once said, "#sad'

Hang in there mate, and best of luck to the country in getting  through.

@Steveromagnino , hang in there mate and keep ya eyes open , it's a monumental Thai shite fight brewing .

Hows Phuket?
I hear every person that wants to get into Thailand just flys to Phuket and drives north?

Phuket is in sandbox mode; no one can get in without being fully vaccinated; so local tourism has slumped; as a tourism driven economy it's pretty dire from what I heard, also in low season now anyhow, and so the beaches and nature are probably absolutely stunning this year.  Has a huge impact on logistics and so on; even truckies can't drive across the northern bridge unless fully vaccinated for example.  A friend of mine rode the TdF (same distances every day but alone for charity), so something like 3,400km over 21 days, must have been mindnumbing riding around and around that Island (on a bike it isn't that big and frigging hilly); couldn't ride out in case he couldn't ride back in on the bridge.

I'd imagine you can fly into Phuket or Bkk Airport would be about the same, haven't heard much about people flying into Phuket then driving out, the numbers are very very low for tourism; if you fly into Bkk you need to quarantine to fly onwards to Phuket but for now I believe domestic phuket flights are now probably cancelled.

Most of the local domestic tourism is pretty dead now anyhow, as Bkk is in semi shutdown and people are well aware of the need to take this seriously; more seriously than last time; now we are hitting 21000 infections and 200 dead daily, which is probably the entire number for 2020, but every day.  Everyone is masked up, vaccination is now finally speeding up, but it was critical errors in April combined with Delta variant that have led to this moment, and it's at least a few months before we climb back out.