An interesting article about the unvaccinated who continue to die from COVID.

Nearly 60 million American adults — or about one of out every four — remain unvaccinated against Covid-19. They have made an irrational choice that exposes them to severe illness. But they have also made a choice with a long historical tradition.

In his State of the Union address on Tuesday, President Biden declared, “We will never give up on vaccinating more Americans.” And Biden is right that a continued vaccination campaign can do a lot of good, given that a large majority of Covid deaths and hospitalizations are still occurring among the unvaccinated and unboosted. The question, of course, is what arguments might win over any vaccine skeptics at this point. 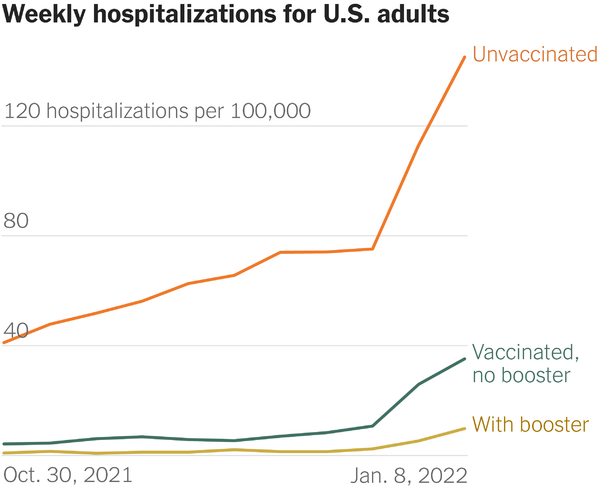 Based on data from 14 U.S. jurisdictions. | Source: Centers for Disease Control and Prevention


Today, I want to use history — with some help from the filmmaker Ken Burns — to answer that question.

The original American advocate for inoculation against severe disease was arguably an enslaved man named Onesimus. Before being forcibly brought to Boston, Onesimus seems to have lived in West Africa, where inoculation was a common practice. There, he had been deliberately infected with a small amount of smallpox to make him immune from a more severe version.

In Boston, Onesimus told his owner, Cotton Mather, about the practice. Mather was among the colonies’ most prominent religious leaders in the 1720s. He was also keenly interested in science, as Burns told me when we spoke recently. Today, science and religion are often considered antithetical, Burns noted, but past religious leaders were scientific pioneers.

When smallpox began spreading in Boston in the 1720s, Mather campaigned for residents to be inoculated — and was met with fierce criticism and even an attempt to bomb his home. Some Bostonians argued that inoculation violated God’s will. Others, including doctors, argued that it was folklore that would do more harm than good.

These arguments were powerful because inoculation was so counterintuitive. Mather was claiming that people could avoid getting sick … by getting sick.

Modern vaccination is somewhat less counterintuitive, because drugs can now teach the immune system to respond to a deadly virus, without having to use small amounts of an actual virus. But vaccination is still a strange notion. It involves the injection of a mysterious cocktail of foreign substances into the human body.

That’s why nearly every new vaccine — even the life-changing polio vaccine — has had its skeptics. The skepticism has increased in recent decades, as Americans have become less trusting of institutions and experts, as Elena Conis, a medical historian, has written.

Historically, the two most effective responses to vaccine skepticism have been government mandates and relentless, calm persuasion. But broad Covid-vaccine mandates are probably unrealistic in the U.S. today, thanks to a combination of a Supreme Court ruling and widescale public opposition. Persuasion will probably have to do most of the work.

Persuasion tends to require taking seriously the concerns of skeptics and creating opportunities for doctors, nurses, relatives, friends and other trusted people to explain why vaccination can be counterintuitive and yet lifesaving. “As a doctor, I was always trained you never give up on people — you show up,” Dr. Vivek Murthy, the surgeon general, told me yesterday. “You build trust by listening to people, helping them feel they’re respected and valued.” 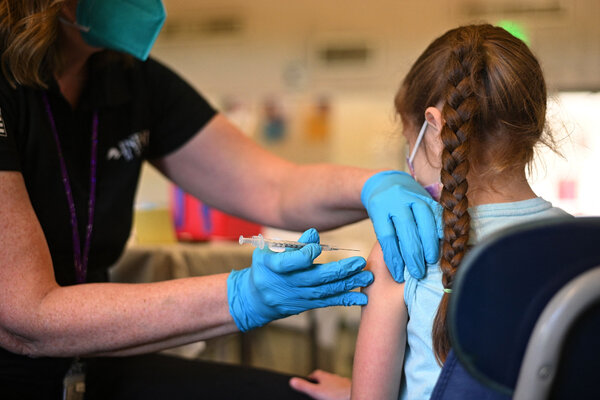 Getting a shot in Los Angeles in January.Robyn Beck/Agence France-Presse — Getty Images

In Mather’s time, one such evangelist for inoculation was Benjamin Franklin. Along with several other founders — including George Washington, John Adams and Thomas Jefferson — Franklin himself was persuaded. Yet he still had a tragic relationship with smallpox inoculation.

As the disease was sweeping through Philadelphia in 1736, he and his wife, Deborah, initially decided not to inoculate their 4-year-old son Francis, known as Franky. The boy was sick with a cold and the Franklins worried that his body would not be able to handle the side effects of inoculation. Soon, though, Franky contracted smallpox and died.

“This is the great tragedy of Franklin’s life,” Burns told me. “Deborah and Benjamin Franklin were just beset by this mistake they made even though it was completely understandable.” (Burns has just posted a six-minute “extra” film clip about Franky and inoculation, and it’s powerful. Next month, PBS will air Burns’s new documentary, “Benjamin Franklin.”)

When rumors spread in Philadelphia that Franky had died from the inoculation rather than the disease itself, Franklin took the painful step of writing the true story in his newspaper, The Pennsylvania Gazette. In the years that followed, he tried to persuade others to avoid his family’s fate.

“Surely parents will no longer refuse to accept and thankfully use a discovery God in his mercy has been pleased to bless mankind with,” Franklin wrote, in a pro-inoculation pamphlet. “For the loss of one in 10 thereby is not merely the loss of so many persons, but the accumulated loss of all the children and children’s children the deceased might have had, multiplied by successive generations.”

In the U.S. today, the death toll from Covid has exceeded 950,000, and many of those deaths occurred after vaccines were available. It is a tragic pattern that’s consistent with history: Vaccination tends to be both counterintuitive and highly effective.
Click to expand...

I am honestly of the opinion that the 60 million unvaxxed by choice at this point, after seeing the stark evadents of almost 1 million Americans dead in 2 years, are more than welcome to get sick and die.  It's a win win.  It's a Win because we are losing idiots out of the gene pool, and it's a win because we have likely prevented them from raising children who will also highly likely to turn out to be idiots as well.  I am 100% in favor of self-selection. 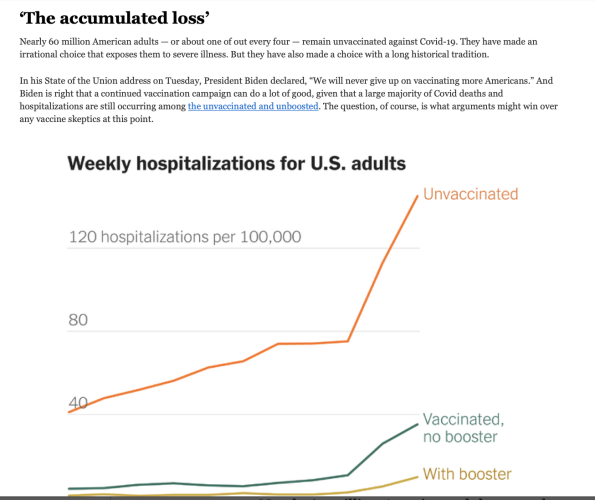 Welcome to the club.  I’ve felt this way since it ended last July.  Relative to the total population of Americans there are vanishing few people dying of COVID who are vaxed. People are dying by choice and I’ve always been pro choice.  Too bad it took a land war in Europe for everyone to acknowledge the pandemic is done

It’s done until the next variant, but fuck em. I have no more sympathy. Let Darwin have his way with them.

Things are looking good.  And, as Sol said, we will see if we are done.  Proclamations of it being over, followed by. tens of thousands of deaths, are absurd.  Anyone who does that is no better than the folks who hate half of America.

We had 1778 deaths, yesterday.  Those folks and their families probably agree Gator is an asshole.

Bus Driver said:
Things are looking good.  And, as Sol said, we will see if we are done.  Proclamations of it being over, followed by. tens of thousands of deaths, are absurd.  Anyone who does that is no better than the folks who hate half of America.

We had 1778 deaths, yesterday.  Those folks and their families probably agree Gator is an asshole.
Click to expand...

Those folks and their families probably agree that Fauci should be prosecuted for trying to help them to not die.

It's all fun and games until we get a variant from which the people doing the right thing are not protected. Might not be a bad idea to help spread the vaccine to poor countries before that happens, until we really reach that point where the unvaxxed are unprotected by choice.

Ishmael said:
Those folks and their families probably agree that Fauci should be prosecuted for trying to help them to not die.
Click to expand...

While I will agree the people are dying are (largely) those who are refusing to take advantage of the protection offered by the vaccine, I am not the kind of person to look away from the human toll.  Gaston has demonstrated he is a special kind. of selfish - one who not only thinks primarily of himself, but is completely indifferent to the suffering of others.

How will you mark that day? 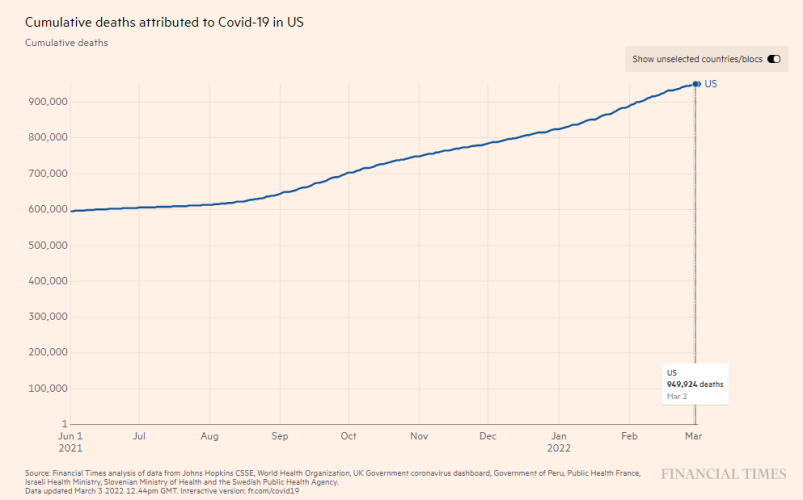 How will you mark that day?

Sadly those numbers are likely based upon reported numbers, I would think you have actually surpassed the magic number because some states believed the former guy saying it's only 15...... soon it will be zero. They did their level best to pretend it was all a nothingberder.

Bus Driver said:
Things are looking good.  And, as Sol said, we will see if we are done.  Proclamations of it being over, followed by. tens of thousands of deaths, are absurd.  Anyone who does that is no better than the folks who hate half of America.

We had 1778 deaths, yesterday.  Those folks and their families probably agree Gator is an asshole.
Click to expand...

Do you understand how much you suck?

Those people who have the option to be vaxed, and walk away deserve to be punished in any number of ways. This is very like dumping rice in to the latrine pit in a refugee camp in Eritrea.

Pfizer's cumulative analysis of adverse effects from their vaccine was leaked by a hacker breech of their system.

Anyone here other than me actually bother to read it? It's about 40 pages.

Voyageur said:
Do you understand how much you suck?
Click to expand...

don't worry, I am. you do suck, though. selfish bastard, you are.

Voyageur said:
don't worry, I am. you do suck, though. selfish bastard, you are.
Click to expand...

Q. How is it selfish not to give a flying fuck about those who willfully refuse to get vaxed despite overwhelming evidence of the safety and efficacy to not one but two different vaccines?

A. It isn’t you are just a whiny bitch

Q.  Who are the selfish pricks in this scenario??
A. The unvaxed