The Discarded- Rescuing a Tartan 33

Ok, it's not a tale of woe on par with the environmental disaster of the Olympics in Rio: http://forums.sailinganarchy.com/index.php?showtopic=173656

but I felt the title was accurate enough to make it worth stealing.

I've hogged VALIS' "boats worth rescuing" thread long enough, and that discussion should be allowed to resume its course, so here we are.

I've known about this Tartan 33 sitting on the hard for about 8 months. A friend intended to buy it, but found a version in better shape. He, other friends and the Most Significant Other have been nudging me to at least inspect it for months. It's like a lost dog that keeps showing up on my doorstep. "Shoo! Go 'way, I already have one!"

#168 of a little over 200 boats produced. The history of the T33 is easily available so I won't rehash it here. Suffice it to say that the 33 was regarded as a "middle child" that enjoyed decent sales and earned a decent reputation for Tartan.

To me, the biggest deterrent to the purchase was "starting over." I can't afford big boats that are beautiful and ready to sail. I always have to rescue a near-zombie and breathe life into them as fast as my wallet will afford, and still let me grow my retirement accounts. And Jesus Christ, is Bright Leaf almost a zombie...

Almost. The bones are solid and the engine started up without putting up too much of a fight after 5 years of sitting on the hard and the boat partially flooding from rains.

The trunk of my car is FULL of shiny new boat crap and my wallet is gasping for a reprieve.

A brief history of Bright Leaf:

- Seems to have spent most of its life on the Chesapeake Bay. A friend vaguely recalls racing against it in the 90's. He *might* even have a photo.

- Most recent PO says the boat was raced until he bought it.

- Most recent PO sailed it for a year or two and mostly due to personal issues, parked it on the hard and walked away with pretty much 3 visits in 5 years to unclog the cockpit and pump out the over-full bilge. So...discarded.

Work starts this week and I'll try to take lots of photos.

OH BOY...another journey!! A chance to live through another refit without it actually having to spend my own money.

The Tartan 33 is a pretty good boat and worth 25-30K in good condition. They made 2 models, the 33 with fractional rig and the 33R with mast head. The 33 had the Scheel keel. S&amp;S Design. Later on Tartan brought out masthead version with the Scheel Keel and extended the transom 8" and called it the 34-2. Same boat but with Jackett as the designer. No more royalty fees to S&amp;S.

If keel sump is good this could be a great boat. They reach very well but not that great in light air with the fractional. Probably worth a shot.

Good luck Ajax. T33 is an excellent choice to revive. Good design and the cabin sole is not as bad a job as on many others.

Gatekeeper said:
OH BOY...another journey!! A chance to live through another refit without it actually having to spend my own money.

And the chance to tell someone else how to spend their money! :lol:

What sort of sailplan/inventory has Bright Leaf got? Will it be race-able with your usual crew?

What sort of sailplan/inventory has Bright Leaf got? Will it be race-able with your usual crew?
Click to expand...

The autopilot is dead/missing parts. I might find more...still going through lockers.

Sail inventory? A main that is still somewhat stiff by Doyle, a genoa and a smaller jib. I haven't found a spinnaker yet but there is a pole and hardware on deck.

It has a Harken Mk I so those two sails will cover a lot of wind range. I think the seller said the genoa is damaged. Gotta lay 'em out and see.

Those are really nice boats, there is a dark green one here locally and I always admire it when it's out sailing.

Congrats, Ajax! It sounds like you have plenty of work ahead of you, but I'm very jealous.

I have a real soft spot for that size and style of boat. 10,000lb displacement in a low-30s LOA is about the smallest size in which the classic orthogonal layout works comfortably in a fast cruiser, without compromises such as trotter boxes or an insanely-squished galley. That late70s/early 80s era was a sweet point for that type of boat: easily-handled fractional rigs had replaced the genoa farms of the early 70s, cockpit ergonomics had improved, and fuller sterns made for nicer handling and more space than mid-70s IOR shapes.

The Westerly Fulmar was probably the best of this type in the UK, with over 400 built. The Swedes built over 500 of their Scanmar 33, a very similar hull shape but with an aft cabin under the cockpit.

I have never seen a Tartan 33 in the flesh -- not many American boats of that size in Ireland -- but the pictures show a boat way prettier than either the Fulmar or Scanmar. If only it had a tiller I'd say it was a near-perfect cruising boat.

I'm sure she will give you lots of pleasure.

I did compromise on a lot of things that I said "I'll never..."

I surrendered the tiller for a wheel, masthead for fractional, hanks for roller furling. I really, really don't want a boat any bigger than this, because I want to be able to singlehand easily. This boat is probably going to push my boundaries. It's nearly a ton heavier than the Pearson 30.

The mainsheet is end boom and the traveler is just forward of the wheel. I should be able to singlehand by sitting off to the side, in front of the wheel. Gonna take some practice, and I'll need to mark the wheel with port/center/stbd tacking guides.

There were two layouts- Plan A and Plan B.

Plan A has a pilot berth and the icebox is opposite from the galley on the port side, forward of the nav station. Apparently some people didn't like the loss of the double berth on port side.

Plan B is the more traditional layout with the icebox with the galley and the long settee/double berth on the port side.

This boat is Plan A, which I am happy with. I will definitely use the pilot berth.

Something to look at in the meantime- 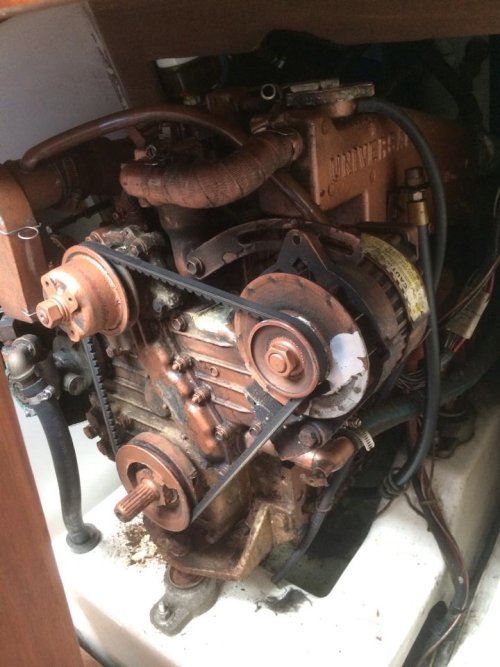 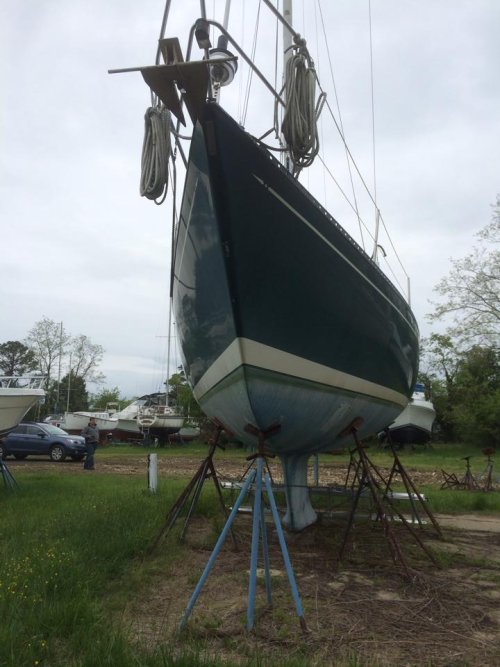 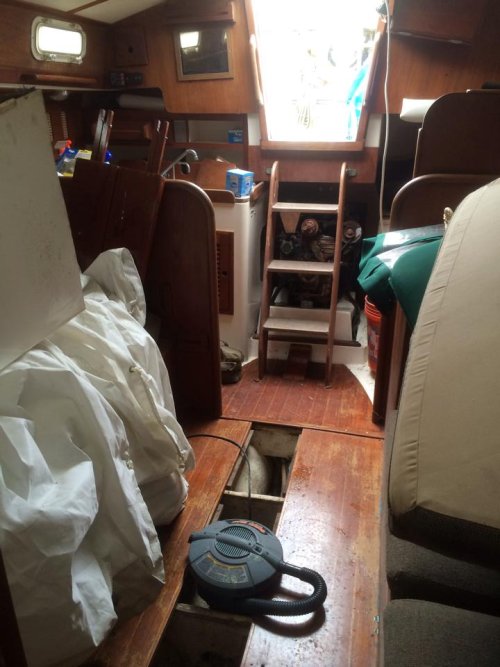 Ajax said:
Something to look at in the meantime-
Click to expand...

Is there an engine space cover, or is it just sitting there exposed under the ladder like that?

What sort of sailplan/inventory has Bright Leaf got? Will it be race-able with your usual crew?
Click to expand...

You could start a museum with that stuff. If you do, I have a few items to contribute. A VDO knot log and a blinky LED depth sounder, for starters.

Good stuff Ajax... Does the pierson stay in the fleet or?? Watch out in the light as you are not going to have the turn of speed you had in the pierson... Good on ya admiral....

Ajax said:
Something to look at in the meantime-
Click to expand...


Is there an engine space cover, or is it just sitting there exposed under the ladder like that?
Click to expand...

No, there's a removable cowling that covers the whole thing. I was in and out of the boat during testing and hadn't put it in place.

Ajax, I'm surprised that you would prefer masthead, esp for shorthanded use. The fractional combination of smaller headsails and more adjustable main is handy for shorthanded use, as is the enhanced ability to sail under main alone.

In this case, it means that you have a bigger boat without an increased foretriangle size. Sailboatdata.com lists the Pearson 30 foretriangle as nearly identical to the Tartan 33.

I'm not sure that you need worry about singlehanding difficulties, tho some mods might help. Relocating the primary winches further aft would be one helpful tweak, as would choice of headsail. If the existing sails are shot, a new 110% jib would be very easy to handle, and shouldn't lose much in performance unless you are in v light airs -- when a code 0 would be better than a compromise genoa. If you put a lot of energy into getting your reefing system well-sorted, the result should be a very easily-handled boat.

Bernie had mounted a pair of spinnaker sheet winches on the coaming back closer to the wheel. They were smaller than the primaries, but usable for single-handeing in moderate weather. None of his winches were self-tailing.