This is why we can't have nice things....

Hey, all I wanted was a short section of extruded rub rail for my sailboat... 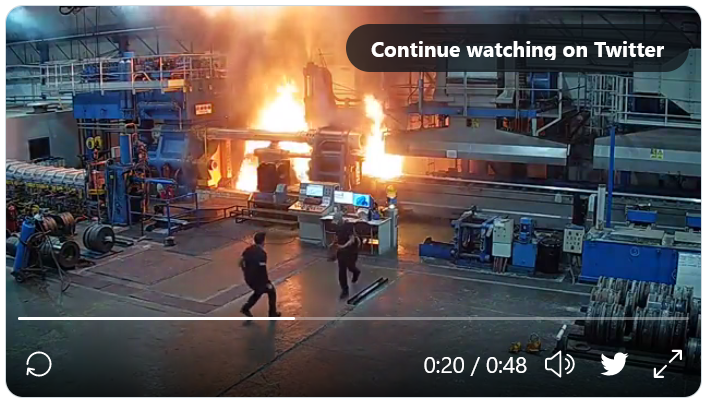 Drone footage of the sunken wreck (Twitter link shown below).

Graafship also built the reproduction of Gardners' "Atlantic" in 2010, available now for sale/charter.

If anyone will take the ultimate "back from the past" challenge, Graafship will likely be the future builder of "Sea Call", Gardners' ultimate sail design. A custom-built crane used for lowering boats into the water collapsed over the weekend at the Northern Yacht Club in North Sydney. At the time of the mishap, the mobile crane had its straps underneath the Free Scot III, pictured under the crane. While further information was not available on Sunday, it appears the collapse happened on Saturday evening. It is believed the boat is owned by a couple from Devon in England.
Last edited: Jun 24, 2022

A custom-built crane used for lowering boats into the water collapsed over the weekend at the Northern Yacht Club in North Sydney. At the time of the mishap, the mobile crane had its straps underneath the Free Scot III, pictured under the crane. While further information was not available on Sunday, it appears the collapse happened on Saturday evening. It is believed the boat is owned by a couple from Devon in England.
Click to expand...

It's French and aluminium. Should buff right out and it if doesn't it will blend in with all the other metal French boats.

I found their blog. It's owned by a retired couple from the UK. It's kind of a sad story. They had spent the first part of the year getting it ready and it was in the process of being moved to prep for bottom paint for launch.

Anyone know the story? (Clip of event embedded below)

I don't mind center cockpits in theory, but that one looks like a prolapsed asshole. Serial sailboat abandoner gets her comeuppance...

​
Jurors found an Annapolis woman guilty of misdemeanor vessel abandonment Thursday in Anne Arundel Circuit Court, but she signaled that the case would be going back before a judge.​
​ ​
​
During the two-day trial, the jury heard evidence related to Angelina Scarton’s weathered 25-foot sailboat, which sat anchored in upper Spa Creek in April 2020. Annapolis Harbormaster Beth Bellis wrote in charging papers that the vessel dragged anchor throughout the harbor over the next several weeks, crashing into the pier of a condominium complex and blocking access to city moorings. Bellis said the boat was also taking on water in the cockpit.​
​
Scarton did not testify at her trial this week, according to court records. The trial before Anne Arundel Circuit Judge Richard R. Trunnell was an appeal of Scarton’s district court case, in which she was found guilty and sentenced earlier this year to 180 days of incarceration, suspended after 30 days.​
​
A portion of the trial touched on disputes between the city’s harbormaster and Scarton in 2020.​
​
In addition to witness testimony, prosecutors presented photos of citations being left on the sailboat. Defense attorney Felipe Gonzales presented sections of an Annapolis Police Department report investigating Scarton’s claim that Bellis had lied on charging papers by backdating citations to support criminal charges. The investigation found no evidence that Bellis had improperly issued the citations.​
​
Reached Friday afternoon, Scarton said the case would be going to trial again, but would not comment further on the matter. She has 10 days to file for a new trial, and she is scheduled to be resentenced Aug. 19.​
​
The misdemeanor case was the last in a string of disputes regarding Scarton’s boats.​
​
In 2019, she was cited by Natural Resources Police after Crazy Girl, 32-foot, sank near Tolly Point and started leaking fuel. The incident, coupled with another sailboat washing ashore on Greenbury Point, inspired Annapolis Sen. Sarah Elfreth to propose legislation making it easier for the Department of Natural Resources to seize abandoned vessels. The bill later became law. Scarton’s 2019 citations were eventually dismissed in court.​
​
CRIME ​
This 25-foot sailboat was allegedly abandoned in upper Spa Creek by an Annapolis woman who's already being prosecuted in two Maryland counties for ditching dilapidated vessels in public waters. Angelina Scarton, 31, faces a fresh abandoned boat charge, filed by the Annapolis Harbormaster on May 1. (Paul W. Gillespie/Capital Gazette)​
​
An Annapolis woman being prosecuted for leaving a trail of boats abandoned in Maryland waters again finds herself in trouble with the law, this time for allegedly ditching a sailboat in Spa Creek.​
Angelina Scarton was charged May 1 with one count of abandoning a vessel in the waters of the City of Annapolis. Reached by telephone Friday, the 31-year-old denied her boat was abandoned and blamed Maryland Natural Resources Police for the handful of other active boat abandonment charges against her.​
​
Scarton’s 25-foot, weathered sailboat first caught the attention of Annapolis Harbormaster Beth Bellis’ team on April 9 when they found it illegally anchored in upper Spa Creek. The boat dragged anchor repeatedly over the next several weeks, crashing into the pier of a condominium complex and blocking access to city moorings, and was found to be taking on water in the cockpit, Bellis wrote in charging documents.​
​
When one of the harbormaster’s watch commanders tried to serve Scarton with citations on April 14, she allegedly fled and cursed at the city officials.​
​
Scarton admitted making a rude gesture at the city harbormaster, but said called the latest charge fraudulent. She denied that the boat was taking on water, saying it was just rainwater, or that the boat had dragged anchor.​
​
“My boat is anchored right by the harbormaster’s boat," she said. "They see me on it all the time and they know I didn’t abandon it.”​
​
The criminal summons filed by the harbormaster is just the latest in a stretch of criminal charges and lawsuits connected to Scarton. The trouble began July 31 when seven of Scarton’s boats were evicted from a South River marina and broke loose as she towed them toward the Chesapeake Bay. With a storm looming, police and Samaritans struggled to corral the vessels.​
All of Scarton’s boats in the runaway fleet were older, made between 1970 and 1980. Scarton has collected a number of vessels to operate a bed and breakfast business on the water, she said.​
“People loved it too.”​
​
Residents warned the police that two of Scarton’s boats were weathering away in precarious positions. But the agency was hamstrung by the state’s abandoned boat law, which says law enforcement can’t remove a vessel from a waterway until it falls into disrepair and becomes a navigational and environmental hazard. Crazy Girl, a 32-foot Trojan cruiser, sunk off Tolly Point and Party of Five washed onto the rocks of Greenbury Point. The former was leaking fuel.​
Last edited: Jul 30, 2022

Jailed - for being an asshole.

Maybe there's hope after all.

We need to make sure the public is aware of this case; especially the dirtbags who want to litter the coast with derelict boats


"fuck, here's comes Steve again, get the fender out.."
P

I believe that is actually Ian

File under "Hat's off to the Coast Guard" or "This is why we can't have nice things" ? Screenshot from video below

STATEN ISLAND, N.Y. — A large fight that broke out on a cruise ship resulted in an emergency response near the Verrazzano-Narrows Bridge early on Tuesday morning, according to sources.

The U.S. Coast Guard was alerted around 4 a.m. to a report of a fight on the Carnival cruise ship Magic in the vicinity of the span, according to a spokesman for the agency.

An estimated 40 to 60 people were involved in the melee on the dance floor of a nightclub on the ship in the waters adjacent to the bridge, according to multiple sources.

The passenger identified as Theresa James said the guests involved in the fight were “ignorant fools acting stupid.” She praised the security on the ship, stating it could have been much worse if they had not intervened.

Minor injuries, but no hospitalizations, were reported, according to a source with the Coast Guard.

Security on board the boat attempted to de-escalate the situation before calling the Coast Guard, according to a law-enforcement source.

The Coast Guard escorted the ship to Pier 88 in Manhattan where members of the NYPD met the vessel and passengers disembarked without further incident, according to multiple sources.

Authorities are trying to determine which law-enforcement agency has jurisdiction in the case.
The NYPD and Customs and Border Protection were among the agencies involved in the initial investigation.

A spokeswoman for the NYPD’s Deputy Commissioner of Public Information said that the investigation continues with no arrests by police at this time.

“On Monday night while Carnival Magic was returning to New York, a number of guests were involved in an altercation in a nightclub,” said a statement from Carnival Corporation. “Thankfully, no serious injuries were reported and our onboard security team intervened. The ship arrived as scheduled Tuesday morning and law-enforcement authorities were notified and met the ship to interview suspects and witnesses and conduct an investigation.”
___
(c)2022 Staten Island Advance, N.Y.
Last edited: Aug 20, 2022

Looks like the same ones who got in a fight on the Block Island ferry last week.
J

​
​
The journey began under scattered cloudy skies, a light breeze, and long swell waves. The ideal conditions upon his departure would not last through his second night at sea. The evening of August 16 brought about 40-knot winds forcing Koch to navigate through rocky seas.​
​
As daylight broke on August 17, Koch's IY Open 60AAL vessel struck something floating in the sea and broke his rudder. He notified his shore team at 2:05 pm that afternoon and chose safety over continuing the challenge with a compromised steering system that he was turning back.​
​
Koch arrived back in Les Sables d'Olonne, France, riding the evening high tide on August 19 under partial sail.​
​
Koch reported his team will assess the condition of the rudder mechanism and plans going forward in the near future.​
​
The ambitious undertaking by the 60-year-old Austrian skipper and Vendee Globe finisher came to an unceremonious and disappointing conclusion for now. Koch's attempt at a world record, single-handed, non-stop, and unassisted journey was to take him through five oceans from the North Pole south to round the Antarctic continent.​
​
His vessel, made from fully recyclable and sustainable materials, was provisioned with 2,400 pounds (1,088 kgs) of supplies to Koch nourished while enduring some of the most brutal sea conditions on earth.​
​
It was a smart decision to abandon the attempt, especially so early on with the proximity to his home port. Losing an effective rudder at sea is a debilitating condition and forces the skipper to either fabricate a makeshift rudder system for steerage or use the trim of the sails to maintain a heading. The journey ended after less than 650 nautical miles of distance covered.​
​
The focus of the attempt, other than the obvious, was to substantiate the viability of utilizing recyclable and sustainable materials in boat building.​
You must log in or register to reply here.
Share:
Facebook Twitter Reddit Pinterest Tumblr WhatsApp Email Share Link