UBS Ices Alinghi sponsorship for now. &lt;bad translation&gt; UBS will only come back on sponsorship amounts are talking about when the legal disputes over the sailing competition settled. "To proceed with Alinghi on an extension of the sponsorship commitment to negotiate, we need to know how the arrangements the 33rd America's Cup look like, "confirmed a spokeswoman for UBS to the trade newspaper." &lt;/bad translation&gt;

I don't read german, but the way I read the bad translation it sounds like the issue is the timing of the event. They are basically saying "We don't want to keep handing out money when there is no end game in sight. Give us some dates and we'll talk."

Or am I reading it completely wrong and UBS are growing some balls and getting on the GGYC bandwagon?

It seems to give a figure for the amount UBS has 'invested' in Alinghi until now, 47.9 million Swiss Francs.

Here is a translation from Babelfish...

Altogether the major bank invested UBS to today 47.9 millions Fr. into the sail project Alinghi. Now Alinghi, whose owner and multibillionaire Ernesto Bertarelli belong for years to the UBS board of directors, must plan the future until further notice without subsidies of the major bank.

The UBS wants to talk only again about Sponsoringbeträge if the legal arguments are clarified around the sail competition. “Over with Alinghi about an extension of the Sponsoring commitment to negotiate, we must know, like the modalities 33. America's Cup look”, confirmed a UBS spokeswoman opposite “the business magazine”.

The legal controversy between Alinghi and BMW Oracle over the basic conditions of the Cups smolder since July 2007.

Sponsoring successor not in view

Whether the major bank suffering from billion-losses wants to finally say good-bye to Alinghi, remains open. Who could jump into the threatening UBS gap, is unclear. The goods examiner company and Alinghi Nebensponsor SGS decline anyhow. SGS-CEO Chris Kirk says opposite the “business magazine” that its enterprise remains as a sponsor on board. But: “UBS is a Leadsponsor, we plays in another league.”

Well hopefully this is good for SAAC

A classic example of cutting off one's nose to spite one's face. His reasons for moving forward with the 33rd AC is now very apparent. He had to show them something. I wonder if Ernie still believes it was a good idea to appeal when he had a clear opportunity to reach a workable agreement with GGYC? One thing is for certain, IF GGYC wins its appeal Ernie no longer has the luxury of protracting the legal debate. He must get it on with GGYC one way or another. F%ck you, chump.

Well, actually, Erne$to doesn't exacty need a sponsor - I mean, he is the richest member of the lucky sperm club in all of Switzerland.

But yes, Sandstone, there was speculation that he had to have some sort deal in place by last week - which was the reason for the deadline. I had wondered if it was something with the bases and the City.

But this deal was probably it.

So what's Lord Mills going to say to his prospective sponsors now?

"Well old chap, you see the Challenger Series sponsorship is wide open, because LV pulled out after 25 years, and now you can actually sponsor both the Challenger Series, my team, and the Defender, because Erne$to got a lump of coal in his stocking this week from his sponsor UBS, and now he's got, well, just his own cash behind the team. And no marketing partner. Besides, now you won't have to worry about all those pesky IRS agents hanging around looking for people who are doing offshore tax deals with the UBS. "

Can you imagine the internal shitfight inside UBS over pulling out of Alinghi? Those conversations would be priceless, and no doubt someone is going to lose his holiday chocolate gift basket over this?

and you can get burned.

Maybe it's all a misunderstanding, and Erne$to just needs to get some additional paperwork in.

Now that's a Bitch Slap if I ever saw one , sucked in Cockface

Goonda said:
I don't read german, but the way I read the bad translation it sounds like the issue is the timing of the event. They are basically saying "We don't want to keep handing out money when there is no end game in sight. Give us some dates and we'll talk."
Or am I reading it completely wrong and UBS are growing some balls and getting on the GGYC bandwagon?
Click to expand...

Do read German. I think the issue is not timing at all. But reading German is not the key: one of two things has happened. The remainder of the powers that be at UBS have hired a consultant (probably unknown to EB) who has stated the case is not likely to fall EB's way. Or, they have utilized the current lack of "clarity" to sever a tie and save face with those clients and corporations who weren't appalled at the sponsorship sum for a boat race.

The bottom line is this: can you imagine the repercussions within the European sponsorship community over this.

Here's the richest guy in all of Switzerland, a member of the Board of Directors, who can't even get his own bank to sponsor his sailing team again.

So, if Erne$to can't get his own bank to sponsor his own team, why would any new company want to be involved with a new team?

So what if Erne$to has 19 entries - on paper. So fucking what.

Where's his media plan to help support all this presumed sponsorship?

What company in their right mind, even with an ultra-healthy global economy, is going to step and sponsor a brand new team for an event that they don't even know the dates of?

I stand corrected that the Dec 15th deadline was arbitrary, at least for Alinghi.

I know of a team with two high profile global 1000 sponsors that have actually given them money......hmmmm

but no we can't have a team involved that has successfully retained sponsors can we now....

FWIW: During my Christmas holidays I was in Hamburg at the Miniaturwunderland, a huge model railway world. The new part that was built during the last two years is Switzerland. And look what I found: 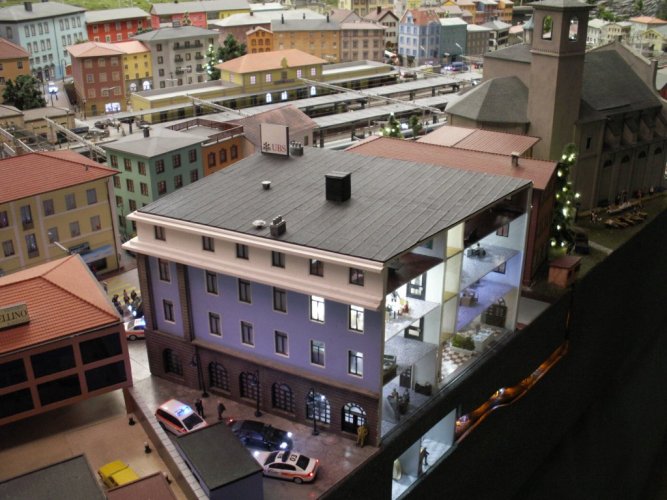 (notice the police cars in front of the entrance)

Rennmaus said:
FWIW: During my Christmas holidays I was in Hamburg at the Miniaturwunderland, a huge model railway world. The new part that was built during the last two years is Switzerland. And look what I found: View attachment 95462

(notice the police cars in front of the entrance)
Click to expand...

Did the other guy get the walls ?