Ishmael said:
I saw an interview with Tommy Emmanuel, he said he has to play many hours every day to keep the fingers going. And then many days he goes to the concert hall and plays for 2-3 hours.


at his best he is a great performer, sometimes not so engaged though or I caught him once on a really bad day and the other time on a really good day
L

Mark_K said:
Tanks eat a lot of gas, a metric shit-load of gas if they are running fast, and they tear the shit out of roads when they do that, so everybody uses rail whenever possible.
Click to expand...

Or flatbed trucks. Used a lot by Ukraine. Even seen PHZ2000 on one, at the same moment crossing on the road a tracked HIMARS on a flatbed.
One of the lessons Ukraine learned since 2014, be flexible, fast and move in small colons. Spread out.
And the reason the wheeled Himars and Ceasars are useful. Till mud comes around.
L

Launch spot of missiles as far away as the Caspian Sea. But numbers fired are down and using S300 more and more. And the noisy little Iranian loitering drones more. Replacement for missiles or just a test ? Hitting Odessa a couple of times, Putin really hates the grain deliveries.
L

Ukrainian missiles and arty really hammering Russian positions. Yesterday 4 waves, each hours apart of them in one day in one area, a supply route to Kherson. Seems the intel of partizans in occupied areas really makes a difference to know were to hit and when.
L

Only Russian advance is near Bakhmut. Snail pace, or actually a snail is faster. Talk is Wagner got rotated out of the front due to heavy losses, Chechens and Dagastani's replaced them. Russia moves forward, get stopped, pushed back by Ukraine. Going on for months now.

Last big Russian push with success was in June. Sveredontesk. 3 months ago. Almost half the war ago.
L

Or flatbed trucks. Used a lot by Ukraine. Even seen PHZ2000 on one, at the same moment crossing on the road a tracked HIMARS on a flatbed.
One of the lessons Ukraine learned since 2014, be flexible, fast and move in small colons. Spread out.
And the reason the wheeled Himars and Ceasars are useful. Till mud comes around.
Click to expand...

Tactically, how is moving in small colons advantageous? Flexible, fast & spread out I'm good with.

Yesterday a deadly day for Russian aviation. 4 planes down, that is 1% of the AF involved.
Looks like planes are used to stop advancing troops and support Russian defence. A pity the advancing troops bring manpads with them.
A twitter video of a downed plane.

Two Russian T-90A tanks got a little stuck after a failed counter-attack in Kharkiv Oblast.
On the job training of conscripts sucks in war. Next up forced mobilized man will have to learn at the battle field.
Russia is their own worst enemy.

Darth Putin on twitter;
Day 214 of my 3 day war. The only people now afraid of Russian army are Russian men of military age. I remain a master strategist.

Never allow a referendum without first deciding the result.

At this rate I'll be asking President Zelensky if we can just keep Moscow.

On the 209th day of the war with Russia, Ukraine recaptured a village near the eastern city of Lysychansk in a small but symbolic victory. Taking the village called Bilohorivka means that Russian President Vladimir Putin does not have full control over the Luhansk region.Luhansk governor Serhiy Haidai said the village of Bilohorivka is under "full control" of the Ukrainian armed forces.

A blow to Putin's Donbas plan! Ukrainian army enters Luhansk On the 209th day of the war with Russia, Ukraine recaptured a village near the eastern ci...

"We have finished with the Russian professional army, it's time to do the same with the amateur one" -

Valerii Zaluzhnyi, Commander-in-Chief of the Armed Forces of Ukraine

In the internet age, it’s almost impossible to get away with anything. (See: Adam Levine.)

And yet, some people still manage to pull off solo flights of destruction worthy of a megalomaniacal supervillain.
Vladimir Putin and Donald Trump, long entwined, continue on vile parallel paths: They would rather destroy their countries than admit they have lost.

They have each created a scrim of lies to justify lunatic personal ambition. And while it should be easy to see through these lies, both cult-of-personality leaders are able to con and bully enough people to remain puissant.

As our ancestors did, the Ukrainians are fighting an abusive overlord, against all odds, for democracy. It’s especially inspiring as a split screen with Trump and his MAGA forces trying to bulldoze democracy and rip away women’s rights. The Ukrainians are battling for a luminous ideal — unlike Trump and Putin, who are smashing a luminous ideal for their own benefit, driven by their dread of being called losers.

Both thugs are getting boxed in, Trump by a bouquet of investigations into his chicanery and Putin by an angry public pushback against his bloody vanity war.

America has its own history of lying itself into wars, in Vietnam and Iraq, for example, and then prolonging the killing of young soldiers as a sop to male politicians’ egos. Now it’s Russia’s turn.

Putin has doubled down on his unprovoked invasion of a neighbor — red-washed as a “special military operation” by the Kremlin. Now he has conscripted 300,000 men to join the front lines, commandeering school buses to drag the men to training camps — a move that sent draft-age men fleeing across the border and flocking to airports, amid tears and howls from women and children.

As Ian Bremmer noted on Twitter, Google searches in Russia for “How to break your arm” have skyrocketed.

The Washington Post said that 1,300 people were arrested at protests across Russia on Wednesday and Thursday. The Times reported that anti-draft protesters blocked a highway during a protest in Dagestan in southern Russia.

Pressured by allies and humiliated by his awful judgment in thinking that swallowing Ukraine would be a cakewalk, Putin seems ever more unhinged. The bodies of critics and oligarchs dying in “accidents” and “suicides” are piling up around him, like a scene in “Goodfellas.” He is ruining countless lives in concentric circles, from former friends, to Russian citizens yanked into a war they don’t believe in, to Ukrainians willing to die for freedom.

George W. Bush thought he could see into Pootie-Poot’s soul, and Hillary Clinton thought she could have a reset with him. But no one can deal with someone so inhumane.

On Friday, Russia began sham referendums in Russian-occupied territory in Ukraine to decide whether the territories want to be incorporated into the Russian state.

Ominous in balaclavas and hoisting guns, Russian soldiers forcing reluctant Ukrainians to vote stood next to election workers in Ukraine in what The Times called “a legally bogus pretext to gobble up their country,” recalling staged votes in 2014 in Crimea.

Of course, the United Nations, where world leaders gathered this past week for the General Assembly, has been toothless as Russia has pursued an illegal war reeking with criminal actions. But the United States has sent repeated warnings to Russia about severe consequences if it uses nuclear weapons.

“As we assemble here,” Secretary of State Tony Blinken told the U.N. Security Council on Thursday, “Ukrainian and international investigators continue to exhume bodies outside of Izyum, a city Russian forces controlled for six months before they were driven out by a Ukrainian counteroffensive. One site contains some 440 unmarked graves. A number of the bodies unearthed there so far reportedly show signs of torture, including one victim with broken arms and a rope around his neck.”

Both Putin and Trump are famous for accusing everyone else of their own sins.

Speaking at the U.N. on Thursday, Sergey Lavrov, the Russian foreign minister, said, “We have no doubt that Ukraine has finally turned into a Nazi-style totalitarian state where standards of international humanitarian law are trampled underfoot with impunity.”

Trump also constantly projects. And now he’s using telepathy. He told Fox’s Sean Hannity that he did not stash any classified papers at Mar-a-Lago because he merely had to think about declassifying them and it would be done. The Wizard of Id.

Just when you thought he couldn’t go lower, Trump said “Hold my Diet Coke.” He shared an image of himself sporting a “Q” pin, for QAnon, and has been reposting more QAnon garbage on his store-brand social media site.

It would be poetic justice to think the walls were closing in on Putin and Trump at the same time, because at some point, all this will become unsustainable. Losers, refusing to admit defeat.

Good luck with that.

General Schwarzkopf will be along shortly to give a lengthy briefing showing in detail that regardless of this, future generations will study his great victory over the Iraqis. 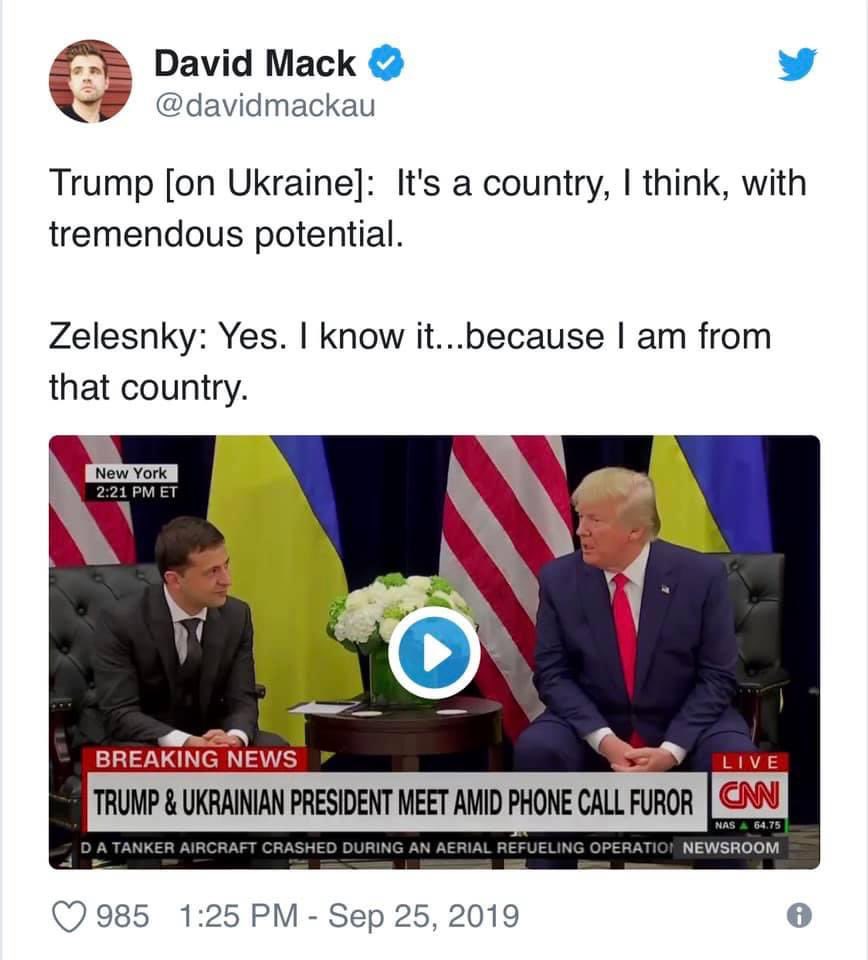 The Pride of New York meant “potential for grift and exploitation.”