VALIS arrives in the Pacific Northwest

On Wednesday afternoon, August 22nd, the sailing vessel VALIS entered the Strait of Juan de Fuca for the first time. 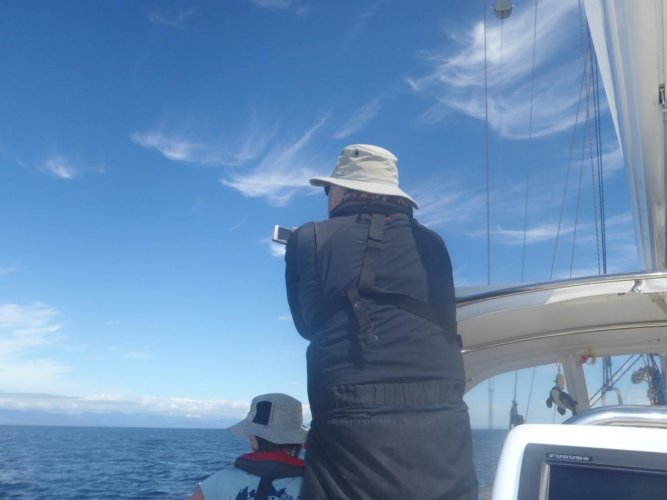 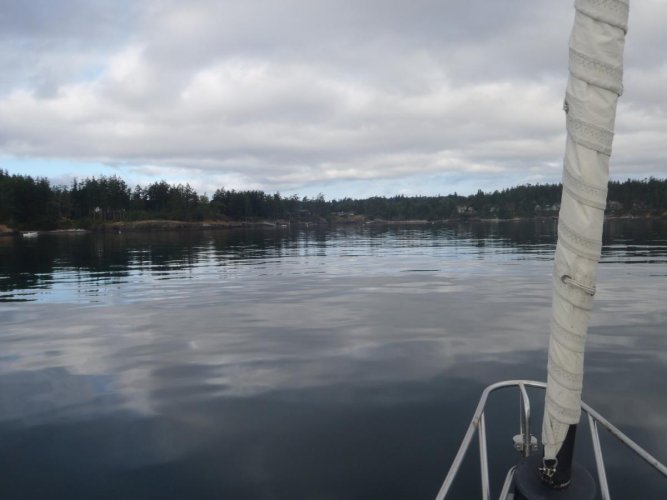 Where are you headed?

On Friday morning, August 24th, a new Pacific Northwest dawn broke for the sailing vessel VALIS. Seriously Boomberries, how perfect was all this? 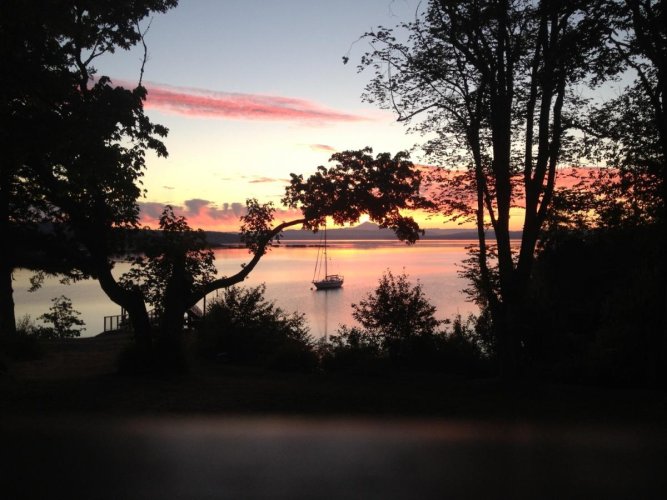 Welcome back to the real world.

Valis and her crew,

Great to see you in one of the most beautiful parts of the world.

Great sunrise pic, b2s It was hard to wake up today miles away from all the crew, after spending the last few weeks under each other's feet. Hugs to all of you this morning. Blackberries and kale on the menu for breaky?

I was very lucky to have been invited to sail on VALIS. A 2,300 mile trip from Hawaii (after they won their Division in the Pac Cup race from San Fran), to Friday Harbour. So many laughs, FANTASTIC sailing, peaceful moments, great wildlife sightings (including a VERY close encounter with a whale), creative and inspired meals, heart to heart chats with the girls on night watches, live ukulele and guitar music, fine music from the nav. station. Truly a charmed passage. It was a wonerful trip. There were five of us for this trip- Skipper Paul, born2sail , myself and two young students who were doing a Tsunami Debris study.

Guys - I too, am a fan of the CA renowned "French Toast girl", but we had our own Peach Pancake Girls. We were treated to a surprise half-way breakfast of peach pancakes with all the toppings. They gave French Toast girl some serious competition. Yes, I have pics.

Friday Harbour and San Juan Island will be a far richer community for having Paul and his wife living there. They are two very kind, warm-hearted and gracious people.

I find it incredible that in the past two years I have sailed over 7,000 miles with friends I've met here in CA. A huge thanks to my Skippers - Cruisin Loser, Mung and VALIS for having me crew with you in the past year or so. I have learned so much from each of you, and enjoyed some absolutely fantastic sailing on your beautiful boats.

A special thanks as well to my crew-mates; WHL who has taught me endless amounts while sailing over 4,000 miles offshore with me in the past two years, and born2sail who was a wonderful guy to crew with, on this trip.

Sailing with like-minded people is a very special experience.

Looks like we are gathering up more good people up here in the PNW......

Congrats on a great race and successful return. Look forward to hearing mor on wildlife, debris and pancakes.

Yes, congratulations on a great race. Good to see you making use of your return trip for research purposes too. Peaches in the middle of the passage must have been awesome.

I think I'm just going to sign off from Sailing Anarchy and never come back.

congratulations! we just returned from our Summer in Europe, and have moved in to our new home at the top of a mountain in the center of San Juan island (Egg Lake).

incredible radio reception here for ham use .. come visit for a BBQ and drinks, or let's make a sked on 80/40 meters sometime.

Soñadora said:
I think I'm just going to sign off from Sailing Anarchy and never come back.

Sons, I hear you. I (&amp; others) am just very lucky that some folks who love to race their boats, need experienced crew for the races or deliveries back home. : )

Welcome to the PNW. I owe the crew of Valis a huge apology for being an areshole after 3 weeks of challenging communications, topped off by the lack of cell phone service on San Juan island that made pick up coordination a little more than frustrating.

Again.. not my usual kind of welcome and the bell can't be unrung

Yes, after a great race and an equally great return trip, VALIS is now tied up at the Friday Harbor marina. We spent a few days at the dock at our house (on Griffin Bay), or on the mooring ball (the dock is too shallow for VALIS at a minus tide), but the marina will be the year-round home.

If you haven't heard, in our division we were first to finish and first overall. Our navigator made some great routing calls, the crew sailed hard and smart, and the weather definitely favored our strengths. The fact that there were no Cal 40's in our division this time no doubt helped us get on the podium, but we sailed a race we can be proud of. I know I am.

However, this is Cruising Anarchy, so let me say a little about our return trip. This was my third attempt to get VALIS up to the PNW: The first time I tried to sail up the coast from San Francisco, but the conditions and forecast gales,and my family's schedule led me to decide to turn back near Cape Mendocino and fly north instead. We had a great trip, but turning back was a bit of a disappointment for me.

The second attempt was in 2010, after the Pacific Cup. I did have San Francisco as an alternate desitnation, and made that call when the Pacific High shifted and we were faced with 1000 miles of headwinds. Still, San Francisco is a pretty great destination...

This year we had some great winds, small to moderate seas, and a fortunate low-pressure system that compressed the NW corner of the Pac High, opening up a nice short cut to Cape Flattery. We probably did 48 hours of motoring (I need to check my logbook), but most of the time we were sailing.

Our crew was Born2Sail, Boomberries, and Jenta and Nicole, two young women who were doing marine debris survey work for NOAA. B2S and I were outnumbered by women, and I have to say that it was a damn pleasant experience. The two girls both had some sailing experience, mostly beer-can races in the Hawaiian Islands, and one of them has done some ocean-crossing on the research boat "Agalita" (the "trash island" folks). B2S, BB, and I were the seasoned hands, but the girls brought a great attitude and eagerness to learn. We were using a 3-hour watch schedule, with two on watch at all times. At the 1-1/2 hour bell, one person would go below, and another come on watch. The youngsters always shared their watch with one of us veterans. It worked out really well.

We didn't see much obvious tsunami debris, but VALIS was tha main communications boat for the returning fleet (strictly voluntary), and we did hear from several boats who had spotted overturned powerboats and other debris that was presumably from the tsunami. There did seem to be more trash than I had seen previously, but the distribution was quite patchy. We sailed over a barnacle-encrusted piling, but other than a couple of bumps against the hull, there was no drama. When we got to shore, we couldn't even see any scraped bottom paint. We saw a few whales (species unidentified), and one of them was swimming in our bow wave for a while, crossing back and forth and getting much too close.

After we tied up, we all stayed at my house for a few days, scrubbing VALIS, visiting some of the parks, and taking in the night life of Friday Harbor. Jenta was the hit of the "live band kareoke" night when we had dinner at "The Rumor Mill", but we already knew she could sing from our at-sea ukelele / guitar sessions. Now all the crew and family are gone, so it's just my wife and I here now. I've still got some work to do on VALIS before I button her up for a few weeks. What a great adventure!

p.s. - WHL, please don't worry about it. Cellphone communications on this island are spotty at best, and that can become pretty frustrating. I do know that BB really appreciated your generosity. Besides, you and I have played music together, so I know you're a good guy! We should try to go sailing together one of these days.

p.p.s. - Daniel, thank you for the kind welcome. I look forward to meeting you in person. 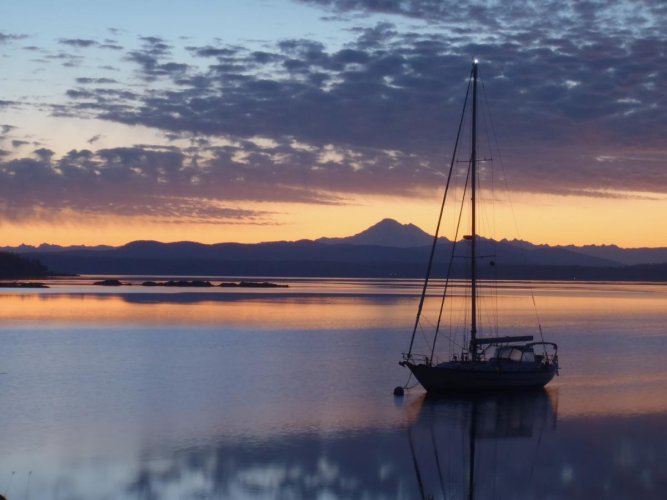 Sounds like a great trip Paul &amp; Co., and that picture of VALIS should be on a calendar.

I hope to get up there to do some cruising some day, perhaps we will raft up with you right there!

Sounds like a great trip. Any boat is fortunate to get Booms aboard. We (Mrs. Loser and I) had fresh swordfish on the grill last night in Cuttyhunk, dinner at India in Providence tonight, headed back out sailing tomorrow. Sparky says "Hi Booms!"

Welcome to San Juan Island! If you see me aboard Walking On Water (at the Sherriff's dock), stop by and say hi. I'll do the same when next I'm at the Port.

Cruisin Loser said:
Sounds like a great trip. Any boat is fortunate to get Booms aboard. We (Mrs. Loser and I) had fresh swordfish on the grill last night in Cuttyhunk, dinner at India in Providence tonight, headed back out sailing tomorrow. Sparky says "Hi Booms!"
Click to expand...

How was the India restaurant? What did you have? It has some of the best Indian dishes I've tasted anywhere.

+1 re: Booms being one of the best offshore crews you could have. No doubt she will be in more demand in the future.