Coconuts.is said:
Conrad will wait for better weather then he will effect repairs on the boom, he has just enough material. Then he will build a jury rig so he can sail to Les Sables. He will be a little short on food because he prepared for 100 days, but he has been rationing since brazil so he will be fine. It will probably be at least a week to 10 days until he can arrive.
Click to expand...

I really hope he can finish and salvage something "material" from his efforts. It will be a heroic effort.

One big issue for Conrad is that at the now greatly reduced speed, he won't be able to get much regen power from the Oceanvolt electric motor/charger. He doesn't have a lot of solar, but at least it's something.

And nothing shading the panels now...

Time for another "Man, if you thought you are having a bad day just look at mine." video.

He might not even be the last finisher. Almost 4,000 nm to burn.

Delighted Sebastian's still trucking along, he represents the real adventurers in the race.

Wonder if Pieter wishes he'd went for a boat more like Enda and Seb when he was buying??

What a week, folks.
First of all, the crossing of the pot black.
Normally he's pretty "easy" on the way back because we're more west 31 w for me, and then because it is less strong in February that in November.
Well for my 4th passage, it was the hardest thing I've ever seen.
A Grey sky for 4 days, rain almost permanently, and hours of wind completely lame interspersed with grains has 30 nds
Anyway a galley.
Then we caught the alizé of the North Atlantic.
And here, we can say that the 4 days that come past summers we can be the hardest part of the race.
Lift the alizée to close in 30 nds of wind with a stormy sea horror.
The boat tape and fix up.
This is the worst in fact, we have the impression that he's gonna disintegrate every wave.
Inside out (because we're overwhelmed), we can't hardly move so the boat is bounce in every sense.
I have a moment tried to make a cup of tea but I quickly gave up so handle a kettle of hot water turned out to be dangerous in these conditions.
Then came what I fear all the time, I have for the third time typed a ofni.
Like I'm at the close I had the drift down and she's the one who broke.
When I felt the shock I jumped out just to see a black mass under water and part immersed in my drift next to float
The damage is considerable: the shaft is cracked from top to bottom, I have a crack at the affair Hull-shaft where home 5 L of water per 24 h, the bridge which is cracked because the shaft has moved.
As a result, I see didac escape because without drifting in, almost impossible to be effective.
To Prevent Family Mary-Etamine Du Lys will skidding of too, I have to switch the keel has 20° instead of 38°.
Result less power, I have to reduce the canvas and I'm going slower.
The wind just parlaying now and we're approaching a bubble anticyclonique.
I just spent my last night normally venté has battle in the middle of the grains, with the wind that tilts of 60° and who goes from 10 to 30 nds, roll up the j2 for spend the j3, the opposite an hour After.....
Take a laugh, send a laugh.
Has by this inconvenience of wind, the night was beautiful with this full moon redhead.
Amazing show.
However despite the heat I manoeuvre in waxed because every night about thirty flying fish on the boat and it's really dangerous, we should see me maneuver head low and hood tight, ha, ha!
And yes despite the moon they don't see the boat.
Once during the transat ag2r in figaro in double or we block each 2 H I received a big in the chest, this calm...
The programme for the rest, 5 days of wind and variable then normally of wearing supported until the sands.
Arrival expected middle of next week.
My next target, the azores in 1000 minutes.
I should a priori pass in the islands.
It's going to be beautiful
This is for the latest news.
I enjoy every moment, even if sometimes it's not easy, and the arrival will be more beautiful.
Despite the difficulty there are certain moments where the sea is calm, the boat slips and all is well.
The dismasting of Conrad my touched at the highest point, so close to the finish, we imagine that it could also happen to us all.
I admit I kinda kept his foot on the brake since yesterday.
I'm watching my mat, I reduce without delay.
For me I keep the last mail from a friend that tells me that the junkyard of my drift is the last galley that can happen to me.
Anyway, courage Conrad
Good week,
Romain

If Conrad is low on food... he shouldn't watch this

Conrad really has had a tough time. I really hope he can get a jury rig and still finish.

looking good for Conrad. He is now making the sails for his juryrig. 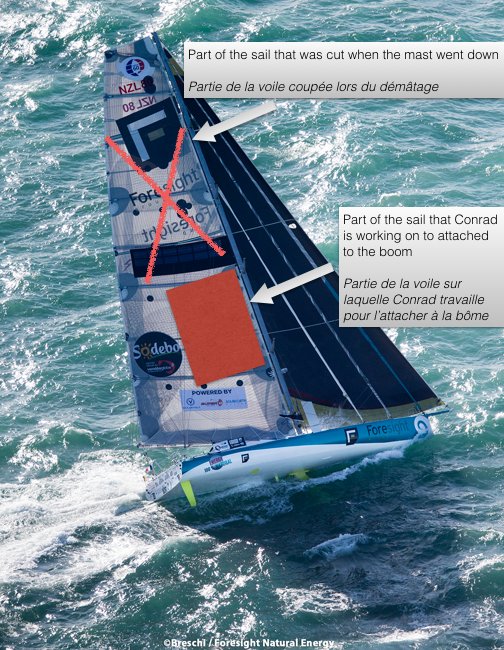 Still working on adapting the mainsail to the boom. Should be ready to put up the jury rig this afternoon...

I wish him well.

Moving in the right direction once more, very nice.

The 2nd English episode of Vendee Online is online. Same guests as the FR version, Jean and Tanguy.

Jean talks quite a bit about projects, in English. No Ultime trimaran for him. If trimaran then open rules and large, 45 meter baby. (Now that should be fun. A bit hard to crowdfund though.)

Interesting that they all suddenly talk English when the official VG media is not involved. B)

Jean had choice words about the media rules too.

2. Can he manage his energy supplies with the on-deck solar panels, suggesting hydrogenerators will not be sufficient in such slow speeds?

2. Can he manage his energy supplies with the on-deck solar panels, suggesting hydrogenerators will not be sufficient in such slow speeds?
Click to expand...

Conrad's power consumption will be fine

....ie no more lots of comms, weather download etc and will put a bungy on tiller instead of power hungry AP. He will get a royal welcome....Though he might be a bit skinny.

Sam D will like this vid...her boy looks in good shape... though he needs to make a honest women of her and go down on bended knee when he gets to the canal..btw his Sth African rudder detour feels like it happened a million years ago...gee this is a frustrating race for the catch up guys no matter how good they and or their boats are.

quite a long article about Sam in V&amp;V. Not time to translate now, but she is apparently going to do the TJV with a "fast boat". Then there was a bit about Roman's rudder problems.

Jonas thanks for the Sam link. I reakon it is one interesting breakfast conversation between these two soloists sailors.....

Then again for that breakfast conversation to occur they would both need to be in the same place at the same time. That seems impossible for their respective campaigns.

Then again they have one child together so they must have bumped into each other just once?

That is one very focused couple.

any news on Conrad? He is going very slow and in the wrong direction.