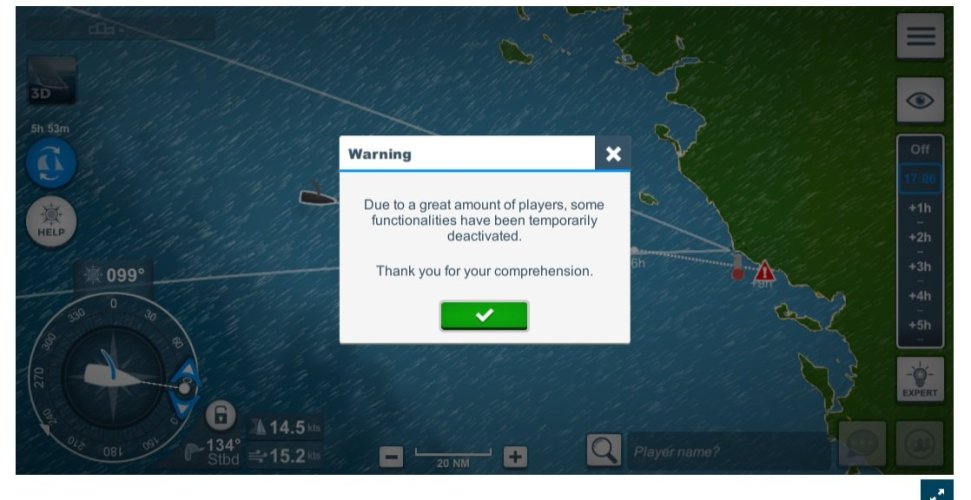 A virtual sailor blames his functionalities.

I may be missing something completely obvious here... I've finished the Vendee Prologue and had a notification saying that my reward credits were available. However when I open the app I can't see anything to collect the credits that I've been awarded.

Can anyone point me in the right direction?

Tris.c said:
I may be missing something completely obvious here... I've finished the Vendee Prologue and had a notification saying that my reward credits were available. However when I open the app I can't see anything to collect the credits that I've been awarded.

Can anyone point me in the right direction?

If you check the VR forums, you'll see multiple threads from people who are angry about recent changes.  Some of it is about the issue you're describing.  I'm not sure if they intend to fix that or if they consider it to be correct as-is and are now expecting people to pay for every credit.

Is it because I started late...? When I first checked in yesterday post-finish, it had me ranked at 11,000-something for the Prologue race. Later I noticed that number kept rising, and today my rank is 20,000-something. I don't think that it matters - or does it WRT these "credits"? Just wondering...

VR could use some help on the Documentation end of things, eh? As large as they are, it sure seems like they'd be making enough money to pay someone for that.

im scared how broken its gonna be at the start of the vendee.....

VR produces a good game, but is awful at communication.

And they have a habit of rolling out adjustments just before a major race (Vendee, VOR, etc) without communication and without any evidence of anticipating bugs.

New users freak out.  Experienced but recent users who are emotionally invested in the game get angry and some quit.  More deeply experienced users who have chosen to stick with it go into a mindset of "here we go again, I guess it's been a few months so we were due.  Let me see if I can figure out what's going on and managed as best I can until they fix the bugs".

I'm confident their first priority right now is to resolve user interface bugs ASAP, before they open Vendee for registration.  Secondary priorities would be to solve whatever's wrong with the Prologue's credits and final rankings, and probably be to update their FAQ pages to align with the recent changes, hopefully also before Vendee starts.  But I doubt they'll ever actually publish anything to summarize what changed, as they should have done before launching the change.

Regarding the fears at the start of Vendee...  I'm confident they're making a hard push to resolve all gameplay related bugs before then, and will likely have it running smoothly.  The biggest problems there will be confusion about the definition of "running smoothly" in absence of communication.  But...  Those who did some of the older virtual VORs will remember server crashes at the starts of VOR legs.  VR went to a cloud model a couple years ago.  I believe they can ramp up server capacity temporarily for the starts of large races like Vendee.  I haven't seen the game crash at a start recently, so I'm optimistic that it won't be a problem.  But...  can't say I'm 100% confident.  Back in the older VOR days, I'd have said 50/50 on a server crash at the start.  Now I'd say maybe 15/85.  Hope for the best, but prepare for the worst.  Watch the real race start in another window and enjoy it, in the meantime.

AHAHAHAHA.....Ya Good Game not GREAT. ...Just the same old same old BS Game. So went sailing in the Genova I m playing around the finish with the update programation, just o to sorta testing how close to the white serf line on auto TWA I can get. Found dirt next time I went online.

tried again and boats found dirt again but this time auto TWA has it headed the boat out, yet it’s still planted in the dirt not moving. WTF 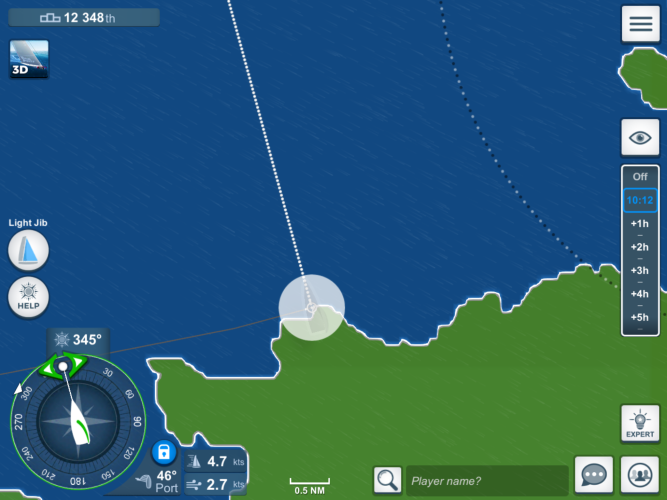 -You have to get a pretty steep angle from the shoreline that you hit, and you came in from the West, so it's possible that you haven't turned far enough back to the West to get offshore.  That's the only point that could possibly be at all "on you".

-Get this...  The UI can be out of sync with the server.  If you install the "dashboard" app described in Zezo, you can get the server data and see the discrepancies.  To be clear: The vast majority of the time, the differences are intangible.  But...  When a windshift is occurring fast, particularly in light winds, you can see significant differences.  You're in 2.7 kts of wind, so I'm guessing maybe a windshift is going through rapidly.  If so, then the wind on the server might be off by 10 degrees or more from what you're seeing in the UI.  If so, then that might explain why your TWA angle is failing to get you off the beach.  When sailing extremely close to land in rapidly shifting winds, I generally sail straight lines (usually with waypoints).  It gets very tricky though if you want to do VMG short-tacking or short-gybing.

-When you run aground, all sorts of bad things happen (which I guess is realistic, in its own way).  Any future programmations or waypoints are deleted. So a scheduled maneuver to unground you won't occur.  Additionally, if you make moves every minute, you can confuse the server in ways I don't entirely understand.  If you look at my track in Genova, you'll see I hit Italy's toe and sailed a few minutes straight away from shore before resuming sailing.  (That sucked...  I was running top 20, maybe top 10, and lost a lot there).  I could have sailed away from shore for one minute and then turned East, but chose not to.  Why?  Well, I have had cases where I've tried that, and then the server has lost track of the fact that I sailed the "away from shore" angle for a minute.  It has backed me up to the grounding and then turned me to my newest course from there, which is of course still into the shoreline.  So now, if I run aground, I turn away from shore, get confirmation, exit the game, wait two minutes (twitching and angry the whole time), go back into the game, wait for a minute to tick by to see the boat still going the right way, and then turn to resume the race.  Maybe overkill, maybe not.  Better to avoid running aground in the first place, of course.  I was pretty unhappy that time because I was pretty confident my course was in safe water.  But I was pushing it, trying to win, and when you do that, sometimes you find a rock.

OK Thanks . LOL mom gots no wheels too...

The photo above is the way the boat looked as I logged in. Stuck , facing out.


I just logged in again after getting off. I had set up to be grounded again. Same thing boat facing out stuck. I touched the ATW lock on to off, clicked the green check mark and it was off ground next time I looked.


Locked On TWA changes boat direction when grounded. User has to click the green check to unlock a grounded boat.

I’ve always found a 180 deg turn if I’m aground and then wait a few minutes for the server to catch up and realize I’m off the bricks, then adjust back to real course

Seems the free game now has opened up waypoints and programation to users. Thing is both are limited to two points. Game shows 9 boxes but the add + sign is gone after both are used. They will reset to two if canceled or the boat passes both.


auto sails is limited to 1 24 hrs at a time before it can be extended Start it at a easy to reset time.

I am not seeing any way to buy an more boxes in waypoints or programation or auto sails on the game board.

Could be part of the limited features bug fix session.

I might play this time around. Any recommendations about installing before I download it?  MacBook &amp; iPhone 11. Thanks

Iphone get the app. In your browser bookmark Zezo.org. on the Mac I just play the online site game page.

DRIFTW00D said:
Seems the free game now has opened up waypoints and programation to users. Thing is both are limited to two points. Game shows 9 boxes but the add + sign is gone after both are used. They will reset to two if canceled or the boat passes both.


auto sails is limited to 1 24 hrs at a time before it can be extended Start it at a easy to reset time.

I am not seeing any way to buy an more boxes in waypoints or programation or auto sails on the game board.

Could be part of the limited features bug fix session.
Click to expand...

better than nothing , allows a less demanding schedule

I'm in the cheap charlie division

Apparently they introduced a pile of additional new changes and it's a total cluster.  If anyone is doing the Jamaica Express race, you'll know what I'm talking about.  I'm not in the race but am looking at the Zezo forum topic about it.  Forget everything I said in Post 10.  By the time Vendee starts, it may be a very different game from what it was when I wrote that.  They'll probably run a few more Category 6 races as beta test events between now and Vendee.

Sounds like a good idea to do some of these races to get a handle on the changes before the Vendee starts.  It may not be fast to be wrestling with a whole new system at the beginning of the Vendee.  Maybe I'll jump in mid-race into the Jamaica Express to see how things work......or don't as the case may be.

OK I’m in the Jamakenmecrazy race.

No zxpress to the front on the chase boat. Harbor start for late boats.

No zxpress to the front on the chase boat. Harbor start for late boats.
Click to expand...

When I started late the first screen had me in the harbour, I set up my course based on that, a few hours later I logged in again and I was at a random location in the middle of the sea, well back from the leaders, and behind the vast majority of boats. No evidence of the escort frigate.  My advice is check back in again.