Clément Giraud in just under 100 days. 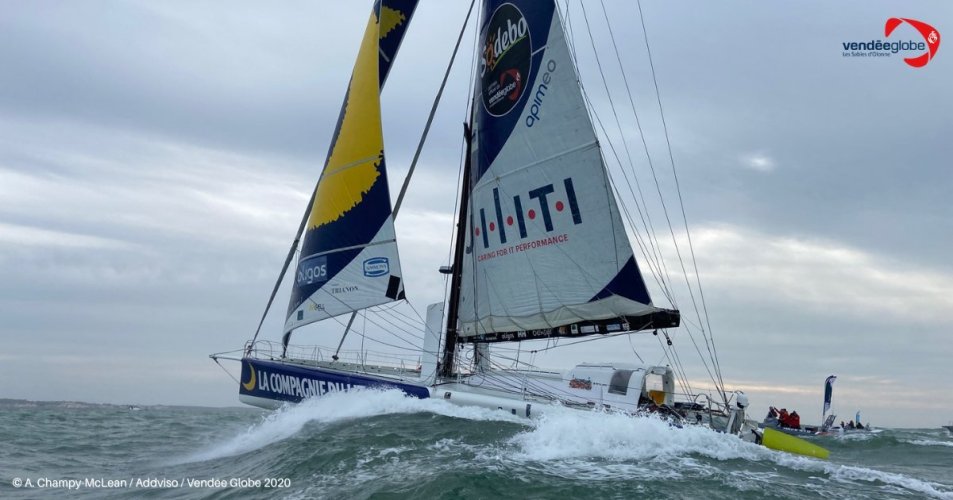 One of the best onboard reports yet, right from the heart, and a philosophical one as well.

And you know what, no so awfully English like some of the other great girls. "You know what I mean?"

I'm fresh out of likes for today, but it's very cool  B) 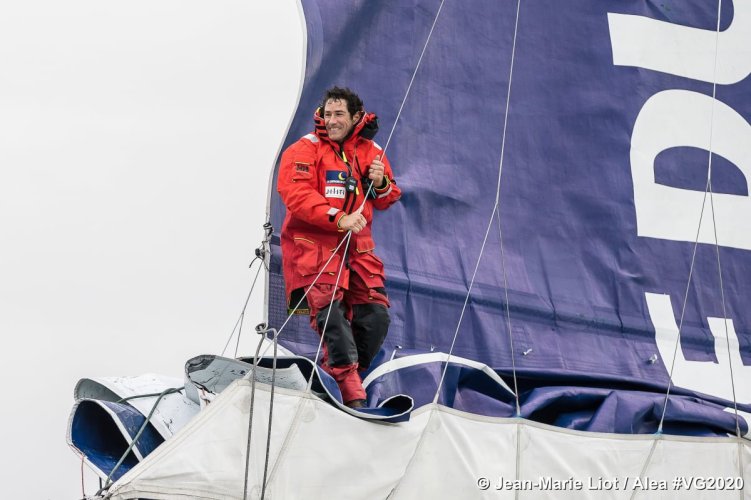 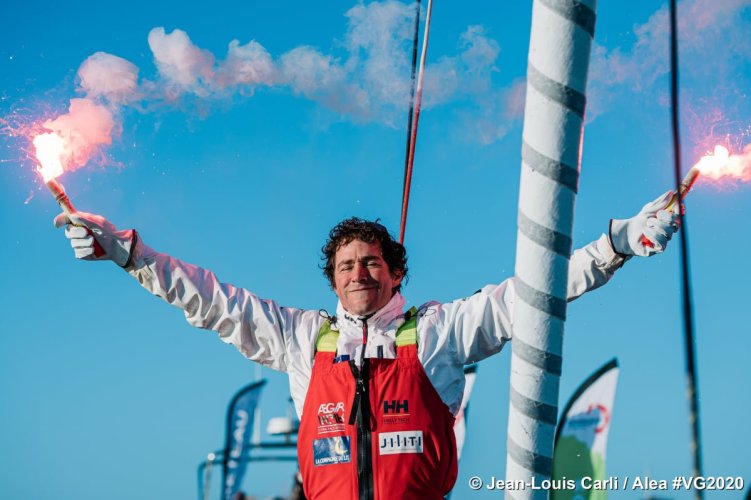 A touching article about Damien Seguin's visit to one of the kids who followed him during the Vendee Globe...

If it had to be someone else, I'm glad its Louis.. I hope Armel gets another good boat for 2024.

Bravo Kojiro ! Nice to see Kojiro Shiraishi well surrounded when he finished, Bilou, Yannick Bestaven and Jean Le Cam were there to congratulate him...

'Do we know what caused all the big fish to disappear from the Caribbean?'  he just shrugged, 'Nothing remarkable or noteworthy happened, they simply got eaten.'

exists a night fish or whale image on a monitor of oscar?
and by the way, helped oscar in the search of escoffier?

Interesting to see how a school followed Kojiro in Japan... different cultures, but the same interest for adventures at sea.

Congrats, Miranda. Quite the history.

Her result is highly commendable and fulfils the simple target she set herself, to finish the course bringing her boat and herself back to Les Sables d’Olonne in good shape, having fully embraced and enjoyed all of the challenges that came her way on a race she considered she was peaking for at ‘just the right age for me’,  51 years old.

Backed by a leading French dairy and farming cooperative, Merron achieved her Vendée Globe success on a modest budget thanks to a carefully executed preparation period working long days and evenings alongside her hugely experienced life partner Halvard Mabire with occasional outside help. Largely unflappable on the water thanks to her tens of thousands of ocean racing miles and her naturally calm demeanour, Merron has cherished each day, and although she visibly missed her nearest and dearest, she proved a sailor well able to choose her optimal route and press hard enough to make good average speeds for her reliable, solid, boat without putting herself or her boat in danger.

Her elapsed time places her between that of Swiss skipper Dominique Wavre who placed seventh in 2012-13 at 90 days when her Owen Clarke design was newer and the 107 days of Rich Wilson on the last edition when the boat was Great American IV.

The Vendée Globe is very much the peak of her ocean racing career, a professional career which really started in 1998 when she was part of Tracy Edwards 1998 crew to take on the Trophée Jules Verne record – alongside a young Sam Davies – intensifying in 1999 when she won the 50 foot class of the Transat Jacques Vabre with Emma Richards.

Back then the Cambridge educated Merron, was just ‘taking a short break’ from a flourishing career in advertising, working in Tokyo, Paris and Sydney. But she has never looked back since then and her own pride today is magnified by many of the sailors – both female and male – who she has sailed with over her 25 year career.

Starting out crewing for her father in an International 14 at the age of nine, by 1979 she had already completed her first Transatlantic, west to east as her family returned from Canada to the UK for her father to take up a new job,  At Cambridge she was a contemporary of Volvo Ocean Race winning skipper and double Olympic silver medallist Ian Walker, who reminded her during her Vendée Globe

“Back then who would have ever thought we would both have gone on to race round the world. We used to spend hours practising gybing in strong winds, I think we called it gybe ‘til you die!” Walker chuckled…

Since then Merron has raced the Route du Rhum with a career best sixth in Class 40 in 2014, the Transat Québec St Malo and the Volvo Ocean Race as navigator on Amer Sports TOO. She won the Transat Jacques Vabre, Quebec - Saint Malo, the RORC Transatlantic. As part of an all female crew of Aviva in 2009 they set a new record around the British Isle.

And some 23 years later, Tracy Edwards last night expressed the feelings of so many of Merron's legions of friends and peers "You are my absolute hero.”
Click to expand...

Full article on the VG site

haribo said:
exists a night fish or whale image on a monitor of oscar?
and by the way, helped oscar in the search of escoffier?
Click to expand...

Not sure I fully understand, but OSCAR can only recognize disruptions in the wave patterns (so nothing under the water). Hoping to hear more about how well it worked this VG.

Have you heard more about why Boris Herrmann's systems didn't prevent his collision with the fishing boat? Not much i the English press recently, and our German anarchists have been pretty busy elsewhere recently.

Any anarchists going to let us know about Miranda's presser? 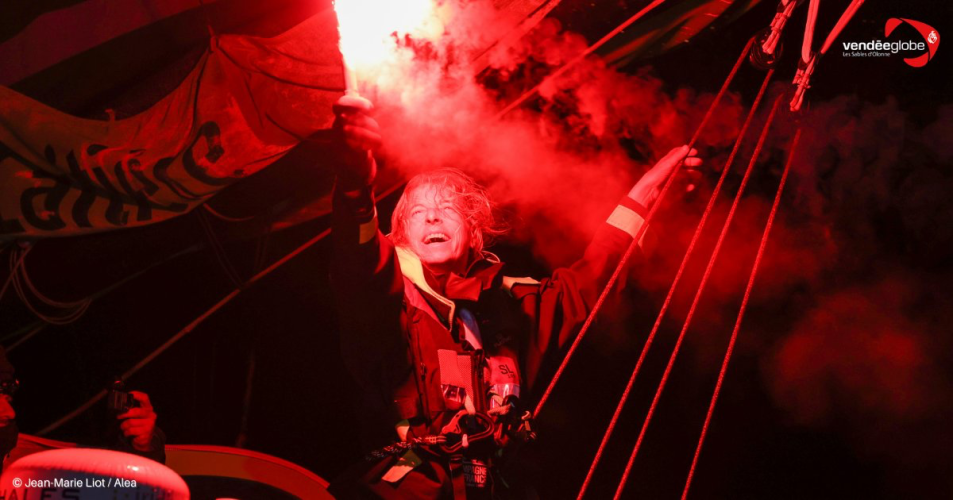 Miranda presser,  responding to her sponsor asking if it will be possible do it again in four years at age 55:

"Of course it's possible. Can we talk about it this afternoon?"

So many interesting back stories.

Wondered why Pip wasn't there to meet Miranda on the docks.

She's home (live on Facebook), and asking her fans to stay home re the COVID regs. Such a muted end for many this VG.

Did you do any mental coaching or preparation or did Halvard coach you?
I'm 51 so if I don't know myself now, I'll never know myself.
Click to expand...

stief said:
Not sure I fully understand, but OSCAR can only recognize disruptions in the wave patterns (so nothing under the water). Hoping to hear more about how well it worked this VG.

Have you heard more about why Boris Herrmann's systems didn't prevent his collision with the fishing boat? Not much i the English press recently, and our German anarchists have been pretty busy elsewhere recently.
Click to expand...

it recognizes temperature differences in the infrared range, i.e. a delphin floating in the bow wave or a flying marlin in front would be an exciting picture, but I do not know whether they store pictures, and also not how far can be seen. but a rescue boat with a people at night must be well recognizable, or?

from boris you hear little here, once he said the fishing boat was green, and not red as it was depicted in the newspaper...

"A member of the shore crew takes you onboard to look at the interior, the kit Clarisse wore and repairs she had to make during the race."

Recap for those who missed the party. Like me.

"...there are more British women than French women to have completed the Vendée Globe. [mischievous smile]"