I just found this video and got me wondering how many people have seen them. I've heard rumors of them around here on Lake Ontario but not much else.

Had two just like that following me on a delivery from Annapolis to Florida a few years ago. Never got close enough to cause any problems. Two of us were on watch when the owner came on deck and saw them, freaked him out but by that time we'd been with them for about an hour and had gotten used to them, LOL.

I've seen one while racing in Bracklesham Bay (English Channel). It didn't get closer than a couple of miles, I'm pleased to say. It was reported on the news so it wasn't a figment of our imagination. For some reason this bit of coastline gets hit by tornados and waterspouts quite often e.g. http://news.bbc.co.uk/1/hi/england/souther...ies/5396508.stm http://news.bbc.co.uk/1/hi/uk/996073.stm

Plenty of times here in Singapore.

Had a very close call with one day-sailing in '96. Mrs Tuffie had kittens!!

I spent 7 years in the US Navy and a lot of time at sea. In the middle of the ocean they happen all the time, cool to watch.

We had one cross the deck of our ship (LPH-11, Uss New Orleans decomishioned, sunk in 2002 or 2003 as a target) the Water spout isn't *as* dangerous as a full blown tornado, but it did push yellow gear around the deck and covered everything with salt water.

BTW, I worked in the Weather office (AG2(aw)) so everytime anything of meterological signifigance happend One of us had to run out and watch it and then record it on the opnav 3144©, Jesh, don't get me started.... I'll stop now.

Suffice it to say though, I have seen some pretty crazy weather shit.

Racing on Lake Erie back in the day

MegaHertz said:
I just found this video and got me wondering how many people have seen them. I've heard rumors of them around here on Lake Ontario but not much else.
http://www.liveleak.com/view?i=36e_1204019787
Click to expand...

We get lots of small ones here in the winter time during storms.

Very entertaining to watch. Magical in a way really.

We've seen a number of them on Galveston Bay. Mostly associated with the afternoon thunderstorms in the summer. Very cool to watch, but not the sort of thing I want to experience in a J/24. Aboard the USS New Orleans maybe, on a bay sailboat NO WAY!

Old sailing buddy sent me photos from a charter trip where they were hit by a water spout. It laid their Bendy 50 over spreaders in the water - tore the bimini off the back of the boat lucky they spotted it and were able to get the main down just before it hit. He said the wind indicator topped out at 75 - said it was pretty intense. 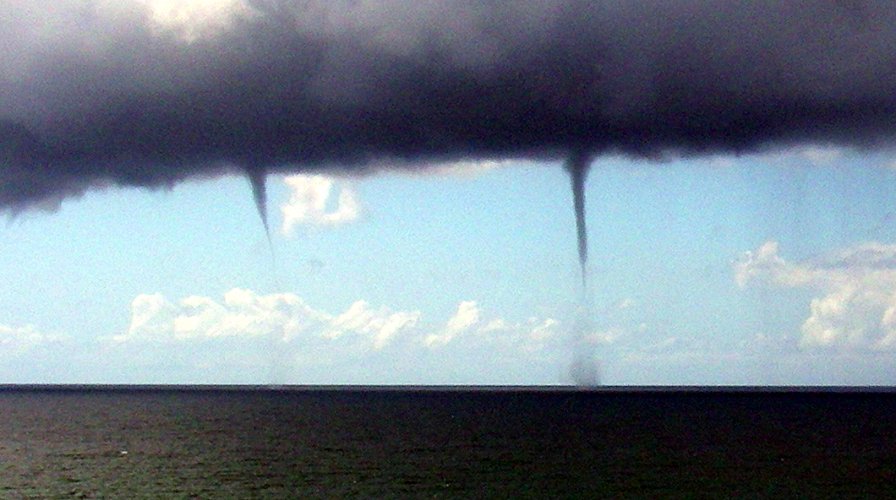 
That is exactly what I was in between off Cape Canaveral

In the early 80's I was doing offshore seismic work in the Gulf of Mexico. Oil exploration stuff in the shallow waters off Louisiana. We'd basically motor up and down a grid in mile square areas towing an array of instruments, one of which was a hydrophone cable 1/4 mile long.

We'd been working hard and attracting a lot of big amberjack to the energy source that trailed the boat. Good fishing for the 10 minutes it took to turn around at the end of each line.

One morning we saw 3 separate waterspouts, not near enough to worry about, but we kept a careful eye on them as it costs money to interupt a line and run.

One formed about 1/2 mile off our beam and was coming towards us. We were halfway through this line and the party chief didn't want to bear off so we stuck it out and hauled ass at the end of the line to get the 'phones out of the way of the spout, which passed astern only a few hundred yards off.

It really can rain fish. The best part was when the spout dissipated, lost energy and collapsed. Amazing how many fish were flopping around inside that thing. We lost the tail bouy off our array but still managed to keep working.

Good bar stories when we got back to Raul's on Grand Isle.

Here is the biggest one I've ever seen- it was a few miles off but we figured it was nearly a quarter mile across. I've heard of one that big. We were off the coast of Durban, SA. 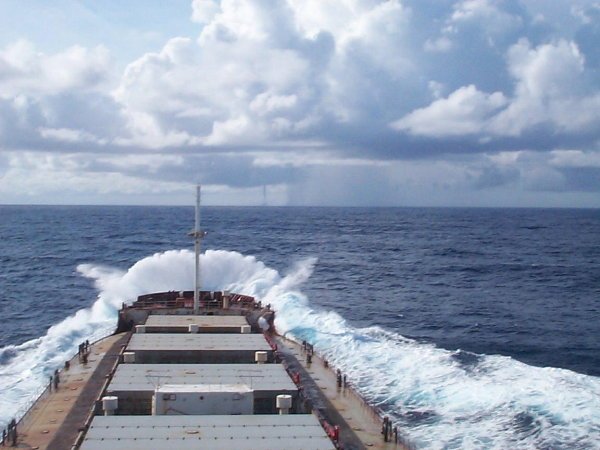 Windsor Yacht Club Fall Series last year we had one on the racecourse... not that big, but rare on lake st. clair

Seen 4, but two of those were twins - very cool.

There's a pic in this story: http://www.latsandatts.net/forum/viewtopic.php?t=8108

Years ago during a Monday night race in Toronto harbour. The waterspout was on the beaches side of the spit.

Shortly after that we got hit with a 70 knot line squall.

Motley said:
Racing on Lake Erie back in the dayPretty crazy auto tacks in big wind
Click to expand...

That one looks more like a full blown tornado! I don't think I'd want to see any of these on the water with me.

My understanding is a typical waterspout isn't too bad (relatively speaking), it's the actual tornados that slide off land into the water that can do really serious damage due to much higher windspeeds.