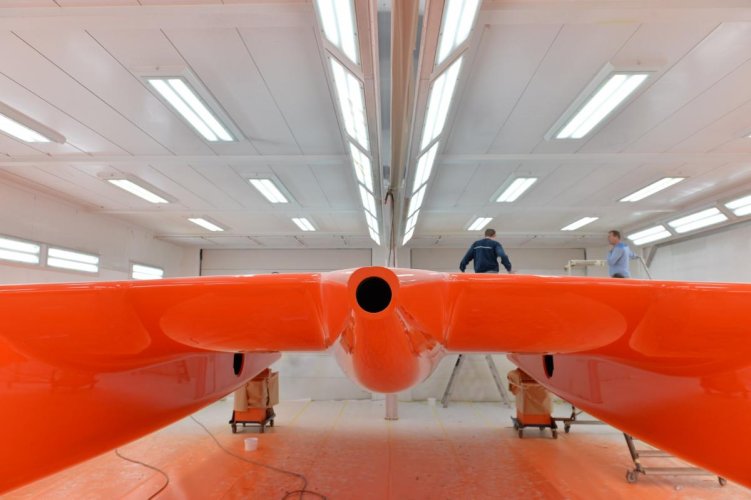 Cut and paste from their blast email; come on Man!

I haven't got the slightest idea.

Personally, it seems bizarre to me that they do not use active controls, but instead use these very unstable passive controls.

For an America's cup boat where "stupid" happened (no automatic controls) due to one challenger's fear of Oracle's obviously superior information technology, putting professional sailors at risk of injury and requiring helmets and seemingly completely OK with dead sailors from time to time, maybe "stupid" foils make sense. I don't think so, but someone might consider a HIGH risk of injury and death "worthwhile."

The computers required for an automatic control system are a thousand times cheaper than the carbon fiber boards. The software (using modern techniques like Simulink to design, simulate, and validate the control system) is also an inexpensive development effort, as witnessed by the low development cost of the control software on drones.

Foils do not work without controls. Its just that simple. The lift required from foils changes very rapidly due to many conditions. Even a very momentary inappropriate amount of lift and the foil borne boat will crash. Not might crash, will crash.

The passive controls barely work in any conditions: in other words, they are always on the edge of a crash. Just settling down softly still leads to dramatic deceleration due to the sudden addition of drag. That can cause people to fly around. Sudden deceleration also causes boneyards or pitchpoles.

Don't get me wrong: foils are the way to go in many cases. Just like blimps have almost no area of applicability in airborne platforms, buoyancy does not need to remain the primary support for boats when underway. Foils make a lot of sense for many reasons.

But foils NEED controls. Active controls. Passive controls are a dangerous and inefficient hack that sometimes work if the danger of a crash is acceptable (e.g., pro sailors with serious personal safety equipment, training, chase boats, and rescue copters). They are not the right way, or even a reasonable way to do it. They are a rule beating hack.

The UptiP foils used on the Flying Phantom, GC 32 and soon to be others can be designed so that they need infrequent adjustment. The altitude control that is intrinsic to these foils WORKS! If you call them passive you'd also have to call Hydroptere's foils passive-and we know they work well-but they have to work in pairs of mainfoils. The TNZ UptiP foils are nothing less than a breakthru in hydrofoil design being the only single mainfoil system(with no moving parts) that can control altitude in a single main foil/dual rudder foil configuration. Recent incarnations of these foils require much less adjustment than did the foils in 34. Your comments about them are dead wrong.


Didn't really come as a surprise, did it? I say 20 posts before it's a full-on foiling shit fight.

Doug, carcrash is not dead wrong. The tip-up foils from NZ have very limited utility. If the rudders come out, you are hosed.

Yes, some "passive" foils can be pretty stable--look at my favorite, WILLIWAW, with ladder foils--but carcrash is correct that you really are being stupid if you are not putting some active control into the system. Whether software is the way is debatable. But some way to control the system is highly desirable.

If any foiler loses the rudder foil or foils that's it. But it's just nonsense that all UptiP, ladder and surface piercing foils are dangerous. Thats what he said: foils that don't have active control are dangerous-that's just plain nuts.

OK Doug, what about following seas?

So says Doug - the toy boat builder - who has zero experience of any full size hydro foiling antics.

In fact he is so certain of his own prescribed wisdom that he will shortly be offering to underwrite all Gunboat G4's at massive discounts compared to more traditional insurance services.

Good on you Boink,

So says Doug - the toy boat builder - who has zero experience of any full size hydro foiling antics.

You beat me to it.

Question I have is , I read or heard the the high speed Americas cup boats were really hard on the foils , after every day the foils had to be pulled out and repaired / tidied up due to the abrasive reaction due to cavitation (air bubbles) at high speed . How the hell are you going to maintain the foils on a boat like that . If you were to cross an ocean ect , by the time you got half way you would have no foils left?