Where to install instruments?

Any idea who make a instruments housing or pods under traveler ? 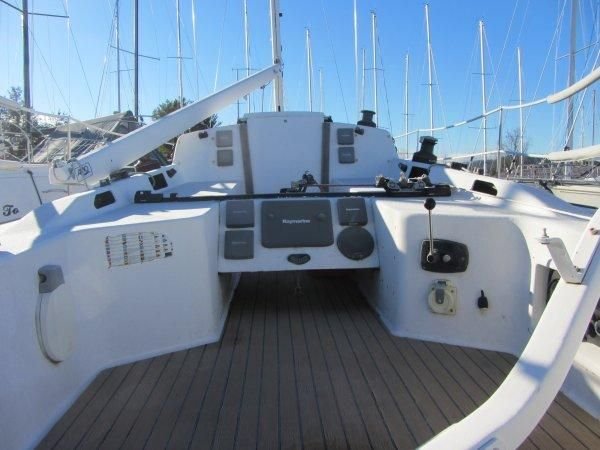 My guess, based on others I know who have similar setups, is the boat owner.

Problem is I do not know who is the owner and just found this photo.

Why do you want to mount stuff where no one can see them well?

longy said:
Why do you want to mount stuff where no one can see them well?
Click to expand...

Problem is there are no place on bulkheads(I have sheet pockets on both side), other instruments are over companion way.This location on my boat still I can see well with some angle when I am at my tiller, and also one of instrument is required facing stern of boat.

Looks like they just bought a sheet of Starboard and mounted instruments to it then mounted it to the boat. If you've got a TAP plastics or equivalent nearby, they can supply the material and do all the cutting/drilling/routing to your specs for not much money.

IStream said:
Looks like they just bought a sheet of Starboard and mounted instruments to it then mounted it to the boat. If you've got a TAP plastics or equivalent nearby, they can supply the material and do all the cutting/drilling/routing to your specs for not much money.
Click to expand...

Thank you so much, and I was thinking it has an enclosure or not.Do you think this is just a sheet and attach to the traveler?

Looks more to me like it's attached at the sides using some sort of bracket, at least that's how I'd do it.

IStream said:
Looks more to me like it's attached at the sides using some sort of bracket, at least that's how I'd do it.
Click to expand...

I am thinking that, too., just near by the traveler and bracketed on the sides.Thank you,

Pretty easy piece to make with a quickie melamine mold. Lighter and allows you to hide the wiring better.

Is this a two-cockpit setup, or is the traveler right at the companionway?

Get wireless displays and you can stick them on with velcro and not have any holes to cut or wiring to lead. In the setup shown, the way the board is canted makes me wonder if someone might land or step on it if they slipped or lost their balance. A more vertical setup might be safer for the equipment. Though it might cut up the cockpit too much, you could also make the mounting board into a sort of thwart, aft of the traveler, strong enough to step on and closer to the helmsman so it would be easier for him or her to see. On a boat like the one pictured, mounting short boards just aft of the traveler P &amp; S might also work if the sightlines were good from the steering position. The top of the boards would be even with the coaming top, and they wouldn't extend across the cockpit - just to the edge of the seats. It would be a bigger tripping hazard than the traveler, but you wouldn't want to step too near there anyway because of the traveler. Depending upon the sightlines though you might need to duplicate the displays P &amp; S to be able to see them easily.

Do you have a photo of your boat's cockpit?

Hopefully on the water

cpt_757 said:
Any idea who make a instruments housing or pods under traveler ?

Those instruments wont last long - they are almost guaranteed to be smashed by feet, winch handles, etc. Very poor location for delicate pieces of equipment

We have ours mounted on the forward end of the cockpit well (near the top) and they do get banged a bit. They've lasted there about 10 years though with only one cracked display - and they all still work. A protective frame covering them all would not be difficult to add if you're worried about possible damage.

Shitty place to put them

Best spot is build an instrument pod and put it above the companionway.

They can be read from any position aft of the hatch - peoples heads and bodies don't get in the way, you can keep your eyes up and forward, and the risk of an accidental button press is much lower

ps. Don't put them where the compass's are on the boat below - someone is always in the way a lot of the time.


There are lots of blogs on how to build one

Above the companionway or on the mast below the boom is often the best place for your instruments. The instruments are then out of the way and partly protected from different impacts. Most important they are visible from the helm, cockpit or partly for those on the rail.

Check if you can read the number boxes on a combination display at distance.

Keeping instruments below the winches, like the compass on the picture above will just give you trouble.

- Different lines are always in the way.

- The instrument get destroyed, by winch handles and more.

- Your crew often get the gear stock to the instrument. Like straps to the life-jackets.

Retired-No Money, no hurry, no worry

Not to mention the grinder's knees....