Who knows their alternator wiring? Wiring an external reg.

I've got a WS500 external regulator that I've had knocking about for around a year &amp; I've decided its time to fit it.
I'm hoping someone here is better with alternator wiring that me.

The alternator its going on is currently internally regulated, its an N-Type, so the regulator sits between the negative brush &amp; the ground. I have the correct n-type harness for the regulator.
This is the alternator wiring as standard: 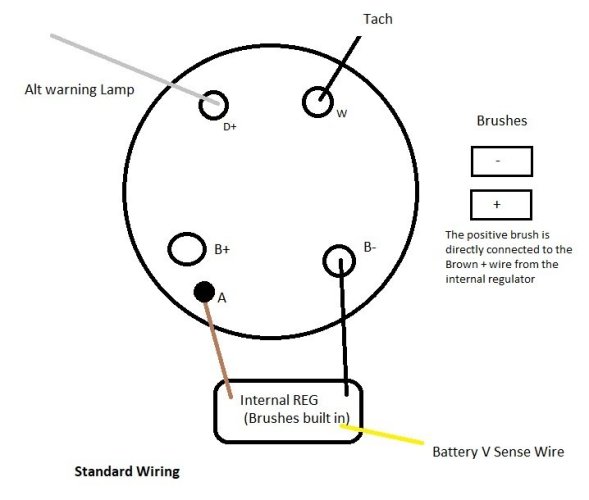 So the positive brush has a continuity with 'A' (I just made A up, its not labelled anything) There is also continuity between A &amp; W, but not between A &amp; the B+ terminal. Which I guess means that A is on the output side of the field diodes, along with W.

My plan was / is to leave the internal reg in places (as it houses the brushes), leave the wire that connects A to the internal reg in place (because it also connects to the positive brush), but remove the black &amp; yellow wires from the reg, so its essentially just acting as a brush holder &amp; nothing else.
I've soldered a field (blue) wire onto the back of the negative brush for the external reg.

To cut a long story short, this is how its wired now &amp; it doesn't work, I'm sure its probably something simple I've missed / got wrong. 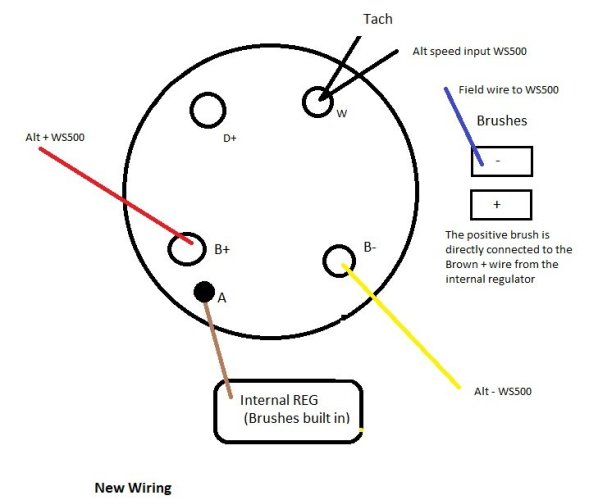 I removed the warning lamp wire from the D+ as the WS500 provides a lamp ground source for the panel.
I'm sure all the wiring in the battery compartment &amp; switch panel is correct, ( the sense wires &amp; ignition feed ) the regulator powers on &amp; goes into 'ramp up mode' (indicated by flashing LEDs) but then goes into error &amp; doesn't produce any output.

Can anyone spot anything obviously wrong with this? I know I haven't got any excitement current at D+ from the lamp, but as the reg works the warning lamp it seemed like it wouldn't need connecting?

Simply put, the regulator must create a current thru the brushes and rotor. Rotor polarity does not matter (except for other connections you may have). So if the rotor has 12v across it and the shaft is turning there will be output. Even on the bench. At speed, with a battery load, 12v across the rotor will eventually cause smoke...normally a regulator would cut this back significantly.

With an external regulator you MUST have a temperature sensor. Otherwise you must either seriously de-rate the alternator or put up with smoke, flames and belt powder.

I've got a temp sensor, but for the sake of simplicity I didn't show it in the wiring, it has no bearing on if the regulator works or not.

Since the positive connection of the internal regulator went to 'A' not the B+ terminal, maybe the external regulator Alt + lead needs to go there instead? I'm pretty sure that the A terminal is on the output of the field diodes and the B+ is obviously after the main diode cluster. 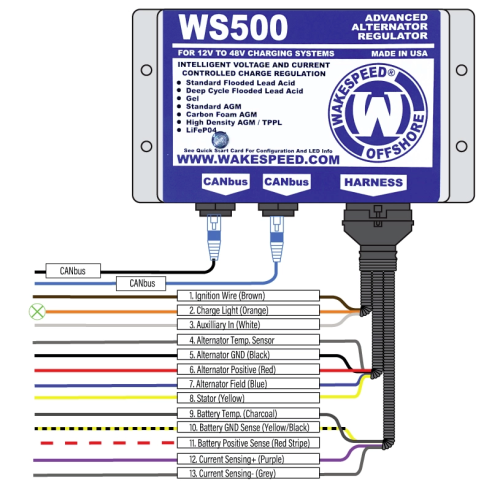 So still trying to puzzle this out.

The first drawing is regulator wiring as it should be in standard form. 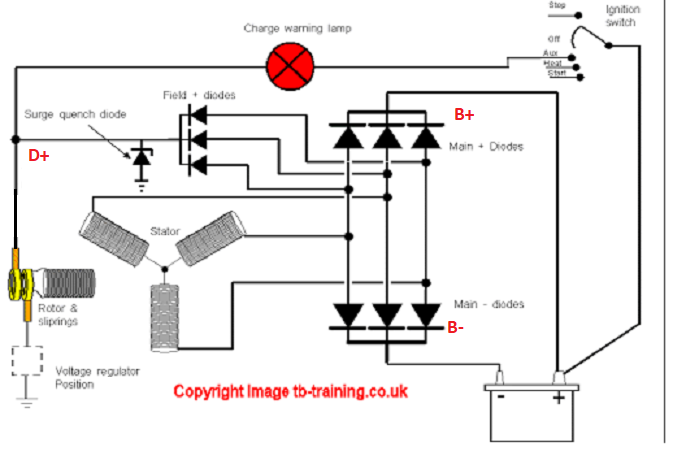 So regulator between the rotor wiring &amp; ground.

This is how I've wired it now: 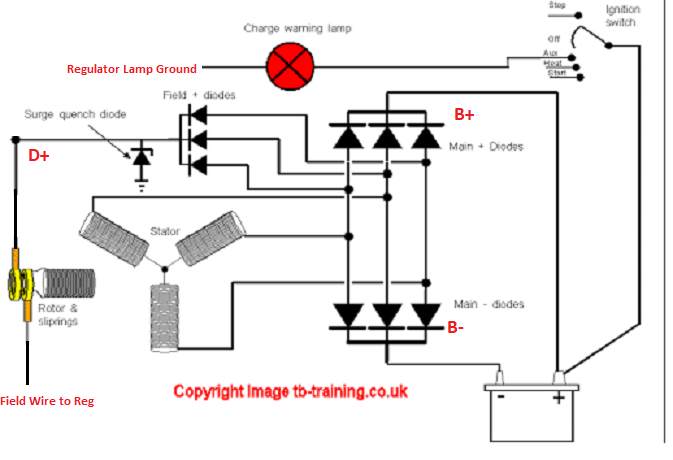 I've left out some detail,  so the rotor is wired the same way, but instead of connecting to the internal regulator, a field wire comes out to the external reg. The alternator regulator wires 5 &amp; 6 are connected to B- &amp; B+ respectively.
I don't have any excitement current from the lamp as its wired to the regulator now, so it has me thinking that maybe the alt + wire on the reg should be wired to D+  so it can provide an excitement current, or that I should just leave the lamp wiring as standard and not use that output on the WS500.

Testing isn't helped by the fact the boat is on a drying morning &amp; only floats 2.5 hours per tide, may have to build a bench testing setup at this rate.
Any thoughts?

The warning lamp provides a tiny current thru the rotor which bootstraps the alternator into operation. You need the lamp, or some resistance there, to avoid havoc from the diode trio being directly connected to the B+ via the RUN switch. The lamp need not be visible if you have some other indication. I would think the marine regulator manual would specify what to do with both rotor connections. The regulators I am familiar with expected the other side of the rotor to be connected to ground. The regulator then provided the current to start alternator output (as I recall). Often after some seconds of engine warm up.

Everything which descends from automobile tech contains this sort of Lil' Abner shortcut crap.

I guess I'm surprised that the regulator has a specific output (well technically ground) to run the alternator warning lamp if it needs to remain connected anyway to excite the alternator.  The reg does have a soft start feature, but it flashes when its ramping up. Or at least trying to.
This is a Lucas alternator I believe or at least an imitation, but either way the internal reg goes between the armature &amp; ground, the WS500 comes with a choice of looms, one for the standard 'P' type and one for this 'N' type.

I'll hook that light back up again &amp; see how its looking.

You have to have the light, it has to be connected and working.  Or you can replace it with a resistor.

Once you have that fixed, if you still have trouble, jumper around the regulator for a second and see if you get maximum output from the alternator.  If you do, the alternator is wired correctly and is working and any remaining problems are in your regulator.

I tried with the light &amp; its the same issue still.
Wired the internal reg back up again, 14.4 volts working perfectly.

Will have to try the jumper trick, but I haven't got the heart to pull it all out again for another while, need to get some sailing in.