I was surprised to see Korea as such a large steel exporter.  Normally, raw material + cheep energy = value add commodity and Korea doesn't have any of the raw material in abundance.  So I looked into it!

The So. Korean Steel industry appears to have basically been a supply chain invention - they built up their steel making in the 80's because they needed raw input to their car/shipping industry.  They used Japanese tech (which itself is curious because of the cultural issues) and created an industry who's purpose is to feed its industrialized trading partners and industries.

At the time, they had low skill workers to employ and it made sense.  They've leveraged that jump start into being basically a "high quality steel maker for the NAFTA empire."  The US doesn't directly import very much steel from Korea but they get a lot of it indirectly though our partners as a value add product.'

...
Lobbyists from steel companies like Nucor and trade groups like the Steel Manufacturers Association are set to testify at Thursday's hearing alongside small businesses and other trade groups that have been harmed by the higher prices created by the tariffs Trump imposed and that Biden has maintained. Those tariffs have shielded the American steel-making industry from some foreign competition, boosting profits and allowing for some marginal growth in terms of capacity and employment.


Those marginal gains have been offset by huge increases in steel prices—increases that have been passed along to steel-consuming industries and, ultimately, to consumers.
...


"Any gains seen by the steel industry from the tariffs have been overshadowed by the losses in the companies downstream," sums up Stuart Speyer, president of Tennsco LLC, a Tennessee-based metal fabrication firm, in testimony to the ITC.
...
Click to expand...

...
Per the ACC, the Trump administration failed to account for American manufacturers' reliance on intermediate products exclusively produced in China. "China is the primary source of many valuable inputs to U.S. chemical manufacturing processes, and for which few or no alternatives exist," an ACC representative said. "It would take years, and billions of dollars, to build manufacturing capabilities for these inputs in the United States or other countries."

Dyes stand out as some of the most notable examples of vital Chinese imports impacted by chemical tariffs. For U.S. manufacturers to produce Red 57, a red pigment commonly found in many cosmetic products, they must import 3-hydroxy-2-naphthoic acid, also known as BONA, from China. BONA is exclusively produced in China, forcing American manufacturers to bear the higher costs associated with importing these critical Chinese-made inputs for their final products.

The chemicals industry is among the most impacted by duties, with companies paying out $8.5 billion in tariffs since 2018, according to the ACC testimony. These added costs have ultimately been passed along to consumers, driving up the prices of final products in a variety of sectors, including pharmaceuticals, construction, and electronics. In the ACC's view, these higher costs are hindering American businesses as they struggle to compete against European and Asian chemical companies, limiting their ability to innovate, expand, and compete for foreign direct investment.
...
Click to expand...

Taxing our way to prosperity is as good an idea as it ever was.


Taxing our way to prosperity is as good an idea as it ever was.
Click to expand...

Too bad there isn’t a small govt, low tax party eh? Turns out there never really was.

Olsonist said:
Tom will be along shortly to talk about free markets, civil liberties, and peace.

Pertinacious Tom said:
The answer to the topic question remains: Trump and Biden.
Click to expand...

Already did! And we still won't tax our way to prosperity, despite Joe and Donald's dreams.

LyinMitch said:
I disagree with @prevaricating Tom in that tariffs, for a public good, can be very useful.
Click to expand...

But the thread, and life, are about what they ARE, not what they can be.

If politics were about what government can be, communism would be the best idea. It's not. Tariffs are about crony capitalism. They CAN BE about other things, but they're not.

The answer to the topic question continues to be Trump and Biden.

If Biden's Trade Policy Was Really Driven by 'Equity,' Trump's Tariffs Would Already Be Gone

If "equity" is the central principle guiding the Biden administration's trade policies, you wouldn't know it by looking at what has been done—or, rather, hasn't been done—in the past 18 months.


Still, that's what U.S. Trade Representative Katherine Tai claims. In a tweet on Wednesday, Tai wrote that Biden is taking a "whole-of-government approach to advancing equity."


"Equity is also central to our trade and economic strategy to create sustainable growth that is equitably shared," she wrote. "Addressing the challenges to communities of color is vital to that strategy."


If that were merely a big pile of progressive pablum, it would be easy enough to ignore. But it's also objectively inaccurate. If "equity" were the prime concern of the Biden administration, it would have long ago disposed of the tariffs imposed by former President Donald Trump on steel, aluminum, and thousands of other products. Those tariffs are nothing more than taxes—and taxes that fall most painfully on people who can least afford to pay them.


And if the Biden administration truly cared about equity, it wouldn't have stopped there. As research from the Progressive Policy Institute (PPI), a left-leaning think tank, has shown, tariffs of all kinds are regressive taxes that hike costs for consumers and make it particularly difficult for poorer households to afford basic goods.


Eliminating many tariffs that serve little purpose "would ease financial burdens in a small but real way for American low-income and minority workers and their families, helping to raise their living standards without intensifying competitive pressure," Ed Gresser, the PPI's vice president and director for trade and global markets, wrote in a report published in April.


Trump's tariffs have contributed to inflation and helped to artificially inflate the cost of everything from appliances to housing. About two-thirds of all imports from China are now subject to tariffs when they enter the United States, with the average tariff being 19.3 percent. That's six times higher than the average tariff on Chinese-made imports before Trump's haphazard trade war began. That's certainly not helping poorer Americans improve their standard of living.


But, as Gresser points out, other aspects of the U.S. tariff code are also to blame for imposing regressive taxes on poorer Americans. Under the "Most Favored Nation" (MFN) system of tariffs that are applied to imports from countries with which the U.S. does not have a specific trade deal, many common consumer goods are subject to higher tariffs than their luxury alternatives. Stainless steel spoons are tariffed at a much higher rate than far more expensive sterling silver spoons, for example, and cheap sneakers are charged a tariff more than five times higher than leather dress shoes. 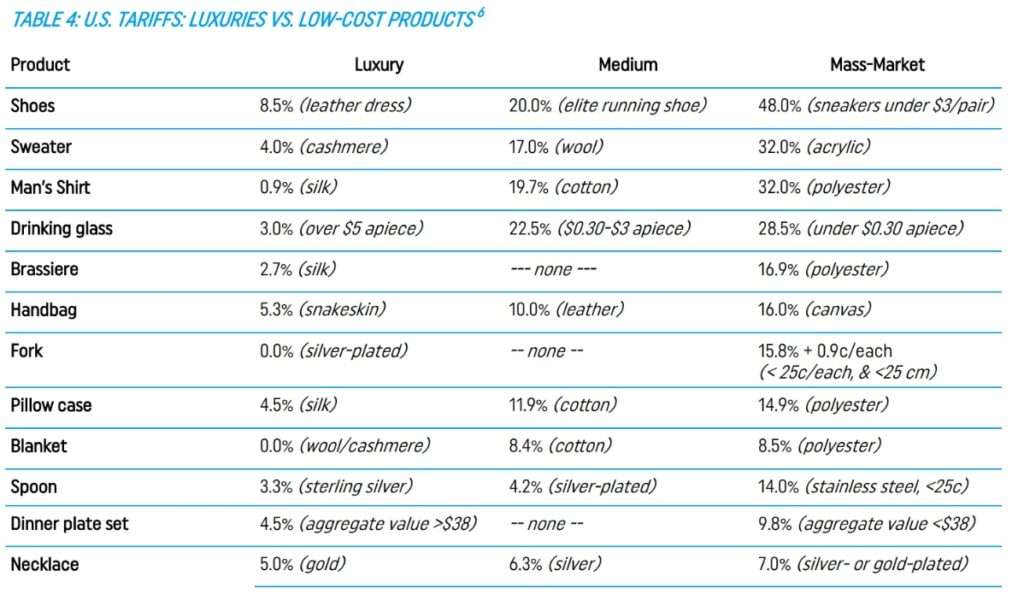 "This skew," Gresser writes, means that America's system of tariffs is not only "regressive, but actually discriminatory against the poor." ...
Click to expand...

Keeping cronies rich and the poor in their place can be considered a "public good" I suppose.