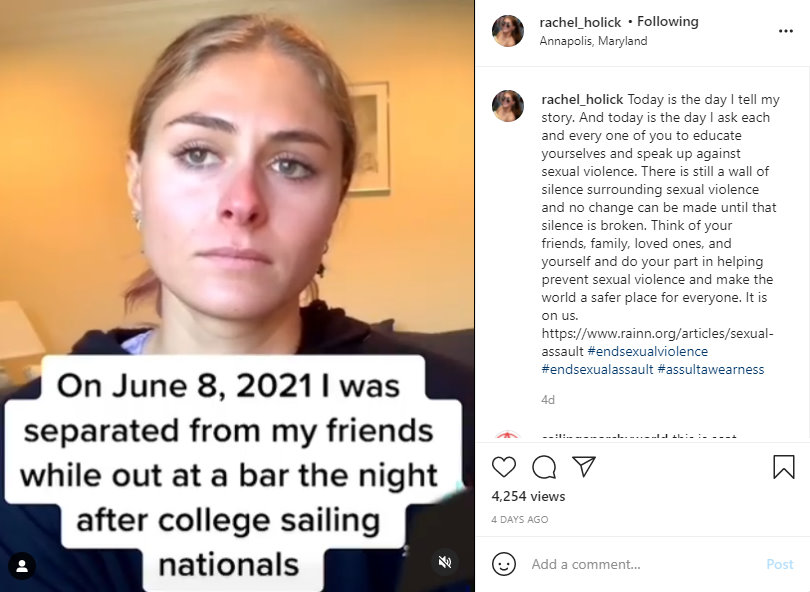 This is so sickening. Read more.

My question is : who?

And what’s being done to bring these scum to justice?

Do we have names - teams - anything?

I hope they meet bubba in prison and get what’s coming to them. There is no room for this kind of behavior

I am so sickened by this. It is unspeakable.

My heart goes out to Rachel Holick, I hope she finds the strength and gets the help to get through this - whatever this means, I cannot even imagine.

I hope at least one of those who did this to her sees this.

If you do, know this: the only way to get at least a tiny bit of redemption back in life is to turn yourself in, name the others and take responsibility.

One more story about a bunch of privileged assholes who think they can get away with anything. I hope the team involved's name is revealed and they spend a lot of time in jail. I am sure the school is a high profile institution that needs to come down a few dozen notches.

To the woman who posted this - thank you for being so brave.

I hope they have been named to law enforcement. They should have no place in free society, let alone in sailing. Sick bastards.

Rum Runner said:
One more story about a bunch of privileged assholes who think they can get away with anything. I hope the team involved's name is revealed and they spend a lot of time in jail. I am sure the school is a high profile institution that needs to come down a few dozen notches.

To the woman who posted this - thank you for being so brave.
Click to expand...

The team should be banned from sailing until the last current member dies of old age.

That story made me absolutely sick. First and foremost, I hope she’s able to cope and recover from this. Second, I hope those piles of shit get everything awful they deserve.

The police will have to gather witness testimony that is rock solid before they can go after the aholes who did this. Hopefully she went straight to law enforcement and got some DNA samples collected by police medics technicians as evidence to prove their guilt. One little bitch will snitch on the others and they will go down.


I’d also like to think that since Rachael is strong enough to come forward on social media that she will be a force to recon with in the future. She’s probably a hell of a sailor to boot!

Btw, where is the great US Failing statement on this? If they've said anything, let me know. They quit sending us anything a decade ago.

ICSA - you got anything else besides this weak shit?? How about the school that knows their guys did it? Crickets? 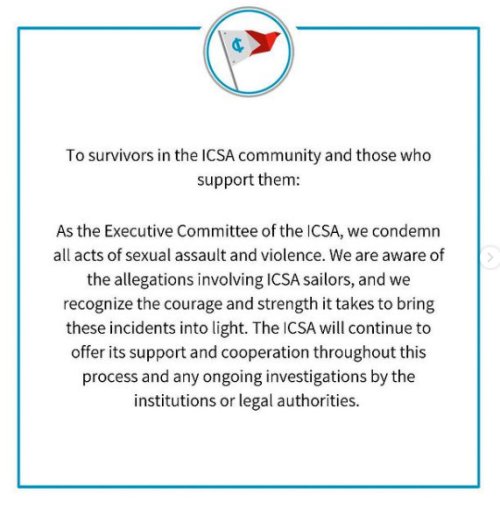 Who runs collage sailing in the US? US Sailing? Surly they must take action?

Edit- Just saw Scots post. Issuing a statement - yeah that will show them.

I've watched enough crime shows to know that punks that do this sort of sadistic act don't just come to it all at once. They build up to it step by step. Hopefully, there will be more victims to be brave enough to come forward when they round up these douchebags.

I didn’t know that the ICSA was run by the Jesuits.

I have a daughter not much older than this young woman and we have had many discussions about college based sexual assault.  What is alleged here goes way beyond what would get most accused guys thrown out of school.  This, as described, is a serious crime.  I hope she went directly to the cops, got swabbed and interviewed while the incident was still fresh.  Those actions dramatically increase the chances that the offender or offenders will pay in a very serious way.

However, I can't see where ICSA has any involvement here except to potentially ban future participation by a team if the allegations are proven.  Their statement was, indeed, lame.  A more appropriate message would have been about an investigation and serious potential ramifications if proven to be true.

I am not casting any doubt to the veracity of this woman’s claims but before the virtual Lynch mob gets into gear maybe take a few steps back and think of the Duke fiasco:

Evidence, DNA, witness testimony and possibly surveillance video or these guys videoing the act are what will make or break the case when arrests and indictments come. This doesn’t sound like the Duke Dupe.

There's a very small pool of easily identified suspects, and their coaches.

It will be the coaches that eventually bring the rapists to justice.  If they don't, all of the schools in the college nationals will be suspected of running programs that allow gang rape.

Guys who would be involved in a gang rape are clearly not very bright, and one of them won't keep their mouth shut.  Ultimately, they are all weak pieces of shit, and one, or more, of them will break down and after a couple of beers probably brag about it.

I hear all your outrage.  I deal with this everyday and have for nearly two decades.

PLEASE,  be less angry and more supportive of the young lady to encourage others to speak out (and for her own well being).

The path to justice it truth.  Help break the silence.