I may have to drive over to the other coast on Tues or Wed.

I see a couple folks I know on the roster. Good luck, fair winds and following seas to all those who participate.

Looks like they are all sailing F18s.  There could be some trials and tribulations this year.  The bad weather up the coast is projected to head south.  Looks like thunder storms near the start line today.  Maybe they will have a sunny clear day for the start after that storm moves through. 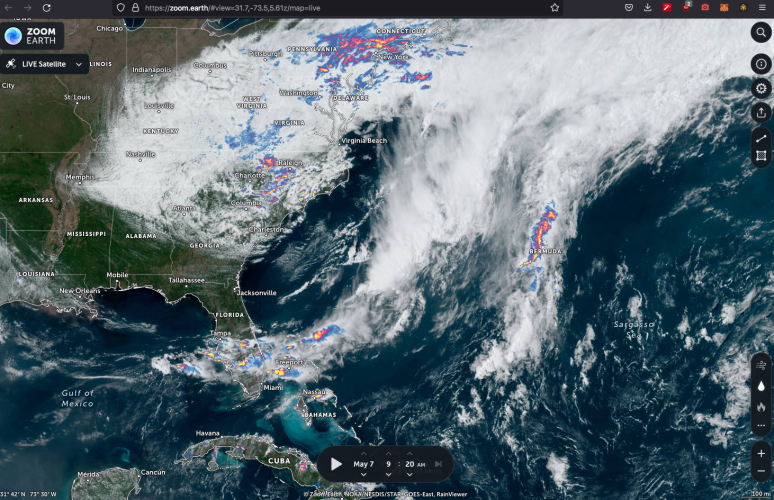 I'm about to go to the beach and hang out with the teams. Will take a video or two.

Was hoping to sail along the first leg but lots of family/work logistics had to line up and they didn't.

there’s a few familiar faces, have you seen?

Was there yesterday. There's good stuff being posted on FB. Some teams promise to livestream the start. One boat has a 14yo crewing for a couple legs - my son (12yo) would love to drive a couple legs. In fact if Florida 300 comes back we'd be game.

Bump n Grind started a Worrell 1000 thread in Ocean Racing Anarchy but it seems like there’s definitely more participation in the thread here.
I’d have to look up when the Worrell started but as a young’un a thousand years ago it seemed to be one of those quirky extreme unrelatable things that happen in the other side of the world but (as I wrote in the other thread):

I gotta say that the stories of the challenges they face and the "fun" they have that have been related to me by one of Worrell 1000’s greatest exponents, Rod Waterhouse, leave me wanting to join in and to never ever want to join in both at the same time but none-the-less demonstrate those who actually make the huge effort to organise themselves, train themselves and have the gifts of skills and determination (aka sheer bloody madness and daring-do) to participate and especially to complete the course (if Murphy, Hewie and the Fat Lady are kept at bay) leave me in awe of the sailors of this race.

It seems that Team Rudee's with Randy Smyth and Dalton Tebo with a 4.9 mile lead won the first leg.

Shocking that Randy Smyth can crush a fleet so handily?  Actually it is a bit shocking that in a pretty physical sport he can still put the wood to the younger pups.  Anybody know which makes/models of F-18 each team is using?

Beach launches should be fun tomorrow

mundt said:
Shocking that Randy Smyth can crush a fleet so handily?  Actually it is a bit shocking that in a pretty physical sport he can still put the wood to the younger pups.  Anybody know which makes/models of F-18 each team is using?
Click to expand...

Agreed on Randy. Impressive. Top 4 boats are Nacra F18, identically configured I think – except one of the teams has a regular main rather than decksweeper.

There's a couple Akurras and there's at least one C2.

The listing is on the website (competitors page). It got updated recently. Some teams are racing on whatever they could get their hands on, rather than the boat they meant to sail, bc boat shipments have, um... not been reliable.

The boards on Sir Smyth's boat look really interesting, really fast too.  Is there an F18 model out there that would maybe be faster?  You'd have to surmise that today's beatdown was mostly the result of a simply masterful, next-level performance by the winners.  If they sail tomorrow it could be really tough out there.  I know it's sacrilegious to utter these words but do any of these guy have a way to reef their mains?  If it does blow 30 with the forecasted sea state and they are forced to reach that would require some very high level skills and probably some luck to finish.  What type of self-flagellation shall I perform to cleanse myself from using the word "reef?"  I do believe though, that if you gotta reach in that kinda wind a full main is gonna be a problem.  I believe!  Hallelujah!

I went to visit dear old Mum for the weekend and was telling my nephew the story of my entry in the 1997 Worrell and leading Randy Smyth (briefly...). Then I get home and read this! That year was pretty much 'run what you brung' and Smyth's custom Team Domino and our Gumbo Mudder SuperCat were by far the most radical. Neither boat was really ready in time for the race and we both dismasted the first day but did get jury rigged during the night but failed to make the second start in Satellite Beach and got disqualified. Smyth was pissed but I got invited to join the race committee... Crazy times and stories from that adventure!

One thing I forgot to mention is that all the top boats but Randy had some kind of incident. Second boat in hit a turtle and had an MOB situation. Other boats had other turtle crashes, or didn't realize they were carrying seaweed. Sonnenklar had the leeward (port) shroud detached (how did this happen?!), and had to sail slow for a bit while the crew solved it, etc, etc.

We should all give credit to Dalton too.  He’s an exceptional crew known for getting the most out of the boat.

mundt said:
I know it's sacrilegious to utter these words but do any of these guy have a way to reef their mains?
Click to expand...

mundt said:
I know it's sacrilegious to utter these words but do any of these guy have a way to reef their mains?
Click to expand...

It's called 'downhaul.' To quote the leader: "flat is fast."

another quote from @martin 'hoff: "Sonnenklar had the leeward (port) shroud detached (how did this happen?!),"

I guess taping the rigging is just for us old farts. Hell we do that with our 40' cruising cat. Sometimes the old ways are good ways.